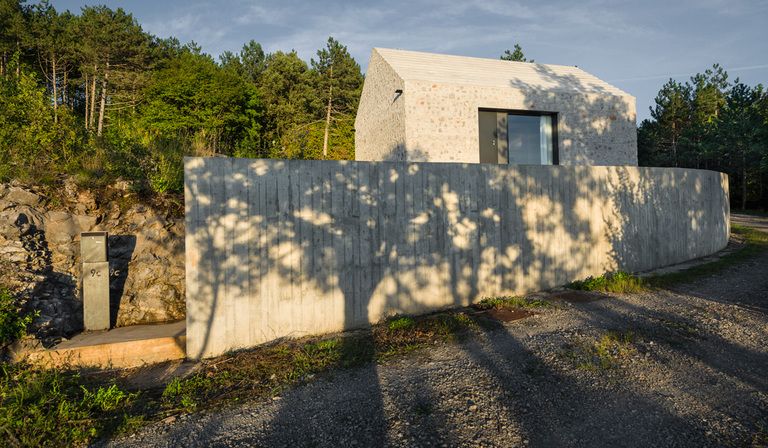 The history of the karst over the past three hundred years and its most recent evolutions make their mark on the design of the Compact Karst House produced by Dekleva Gregorič Arhitekti in the little village of Vrhovlje in Slovenia. Picking up on the historic features associated with the karst house that have been maintained and evolved over the centuries, in their Compact Karst House Aljoša Dekleva and Tina Gregorič use a building technique inherited from architect Marko Dekleva, Aljoša’s father, who worked in this area in the seventies and eighties. Aljoša Dekleva explains the technique he used to simulate the traditional stone cladding of the karst area, made up of calcareous stone or sandstone coarsely hewn and bound together with mortar:
“In the cladding of the façade, there are stones set into it. It is a 15cm thick façade layer where the builder first lays down a row of stones, with the more-or-less flat side of the stone against the framework, and then pours concrete behind the row of stones. The concrete will penetrate from the back of the stones, through the gaps, towards the foreground of the façade, to produce the final image of the façade, the mix of the stones and concrete. When the framework is removed, after one or two days, the builder would eventually remove excessive amount of concrete with a hammer in order to open the surface of the stone.”

Compact Karst House overcomes the structural problems associated with the ancient spontaneous building technique by adding concrete cast on site to both the walls and the roof. The roof is made up of layer over layer of waterproof concrete, with the familiar slab appearance of karst roofs.
From the outside, the new house has the typical stylistic features of smallness and compactness, on a single level with a gabled roof and masonry constructed stone on stone, joined together like a volume hollowed out of a solid. Observing it from inside, however, we can see how it has evolved in response to the contemporary lifestyle. The building has been emptied out and simplified to its outer walls only. The layout is regulated by a second structure of crossed fir plywood which fits longitudinally into the centre of the layout, resting on the masonry but completely independent of it. It divides the space vertically, creating a ground level and a first floor, containing the living area and bedrooms respectively (according to later karst tradition), but also horizontally. The interiors are regulated by two axes, the north-south axis of the rooms (bathroom, living room and kitchen on the ground floor and bedroom, playroom and second bedroom on the first floor) and the east-west axis of circulation from the main entrance to the back door. At the place where the two axes cross are the common areas: the entrance, living room and study on the ground floor and the children’s playroom on the top floor, joined by a plywood staircase which also serves as a bookcase.

The interior layout completely alters the traditional relationship between masonry and windows. Unlike traditional karst architecture, in which there were only a few small windows (due to the harsh climate and the strong Bora wind), the Compact Karst House has sweeping views of the landscape on 3 out of 4 sides overlooking its key landmarks, the church to the west, the forest to the south and the gate to the east. 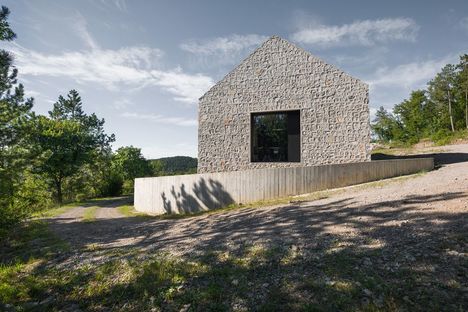 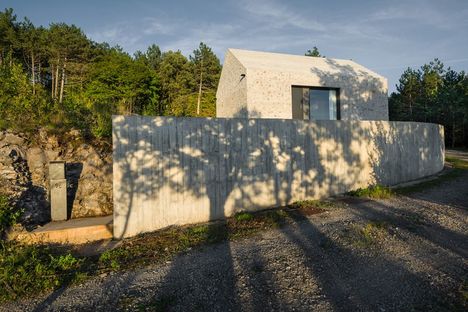 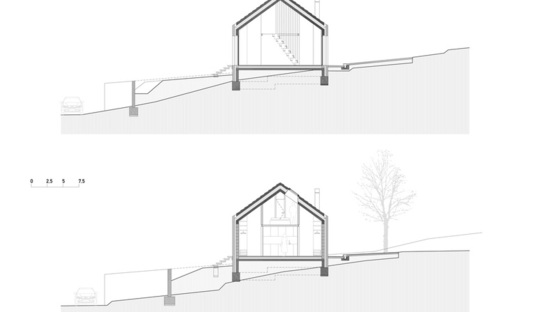 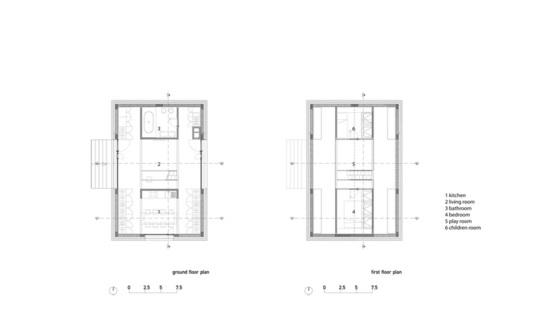 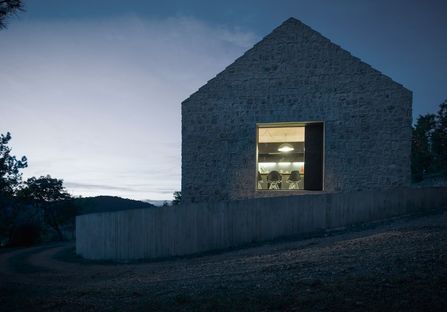 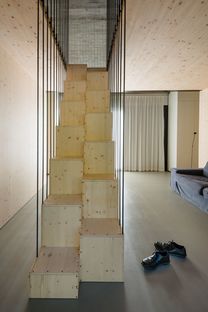 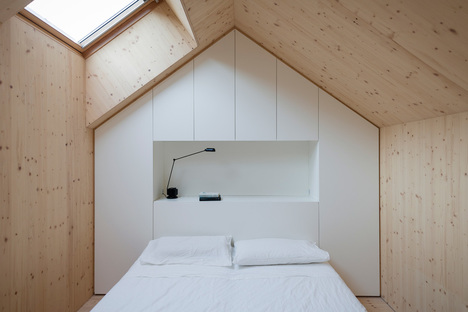 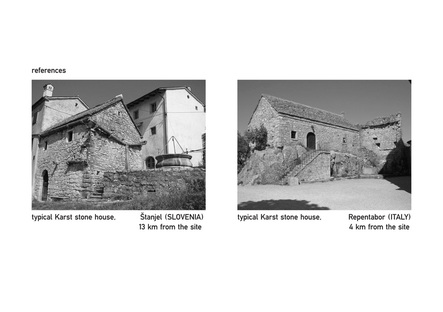 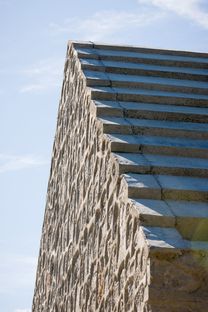 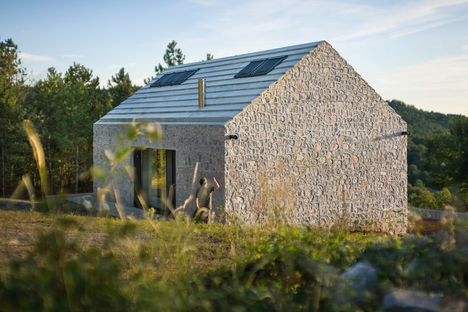 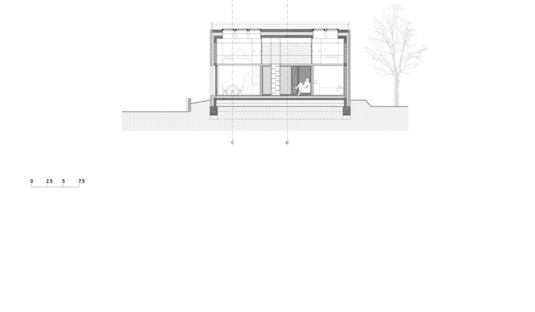 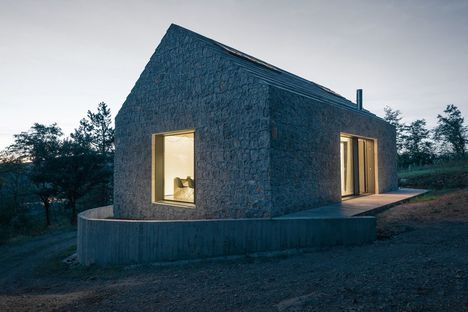 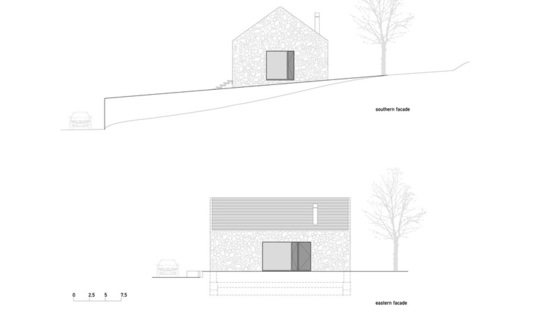 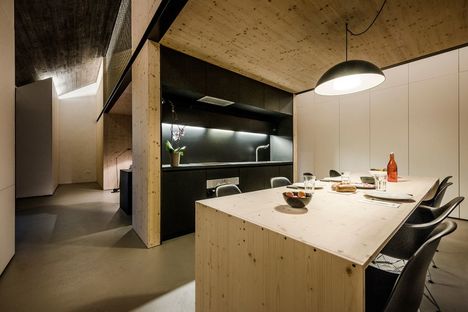 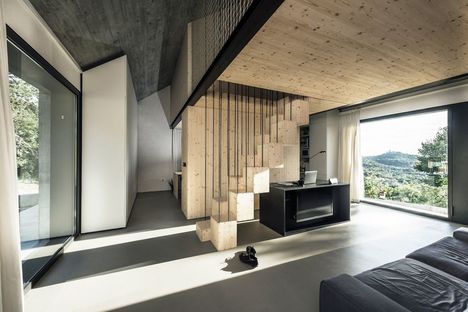 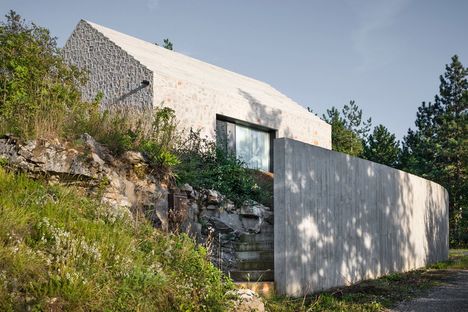 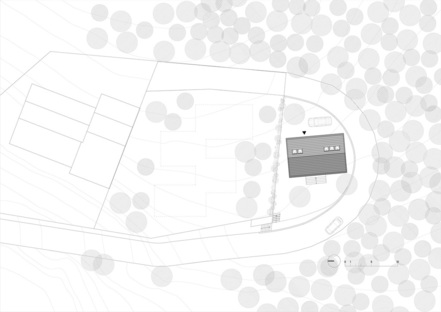 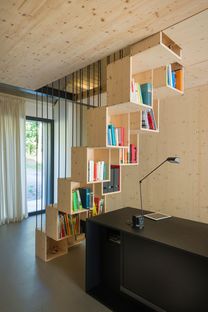 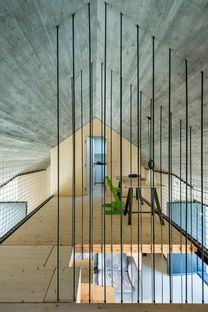 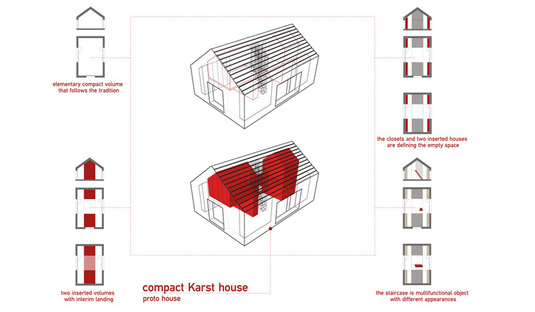