Zandwacht by Observatorium in Rotterdam

Rotterdam-based artists’ collective Observatorium has created the Zandwacht, an installation, that marks the completion of the major land reclamation project - Maasvlakte 2 - in Rotterdam.

Rotterdam-based artists’ collective Observatorium has created the Zandwacht, an installation, that marks the completion of the major land reclamation project - Maasvlakte 2 - in Rotterdam. The Zandwacht shows how landscape is shaped, in this case the large sand dunes along the Dutch coastline of the North Sea. 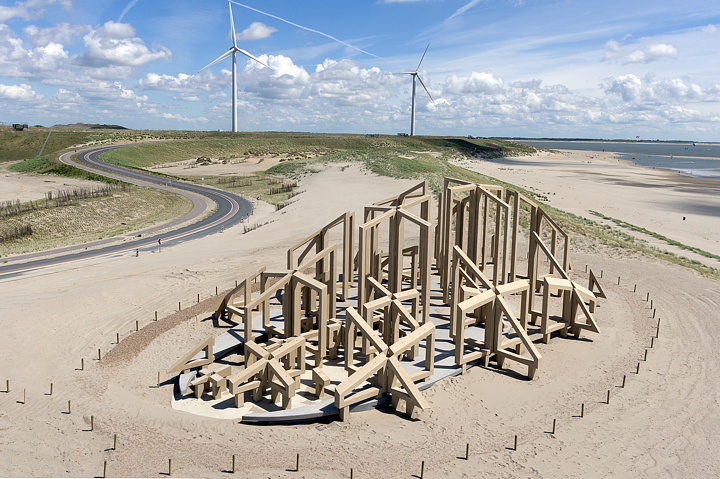 Observatorium is a Rotterdam-based artists’ collective that mainly works in the field of Land Art and recovering developed landscapes and giving nature back to them, like Warten auf den Fluss at the Emscherpark in Germany and  Péage Sauvage at Nantes.

In Rotterdam, the creative collective explored the theme of landscape creation through an installation consisting of 92 slender, concrete elements which represent the three-dimensional pattern of a large dune. Located on a beach created by major civil engineering works - the large land reclamation project in the North Sea in front of the port of Rotterdam, Zandwacht is easy to get to from the city and will give visitors a better understanding of the great forces of nature that implacably shape our environment. An important issue, even more so in the Netherlands where most of the territory has been gained through the skilled, meticulous effort to take land from the sea.

So the Zandwacht aims to tangibly show the creation of a dune, which provides natural protection frm the sea: the wind blows the sand into the air, then when this sand settles it builds up slowly to form bigger and bigger dunes. Actually there is already 1 meter of sand lown up since last year. Zandwacht, as explained by Andre Dekker, is destinated to dissapear under the real dune.
However, the Zandwacht - in the full tradition of Observatorium's twenty-year work - is also an artistic gesture in the environment. Something that drives more visitors to the site, and in the case of Zandwacht has also turned out to have an unexpected acoustic quality. The installation is like an open air theatre where it is possible to put on recitals and shows with the spectacular backdrop of the sea, the container terminal and the city of Rotterdam. The first of these shows will be the poetry marathon on 18 June 2016.

If you want to find out a bit more about the work of the Observatorium collective, why not come to today's Lectio Magistralis at 5 pm at the Pisa DESTeC, where Andre Dekker, artistic and scientific director of the International Summer School 2016 “The City and the Water” will be speaking about the interaction between politics, landscape and people.
More information about the International Summer School on the institutional site and soon on Livegreenblog, confirming our collaboration with the workshop again this year, after 2015  (link).

Project: Observatorium
Location: Rotterdam, The Netherlands
Years: 2015
Images: courtesy of Observatorium
Information about The City and The Water” 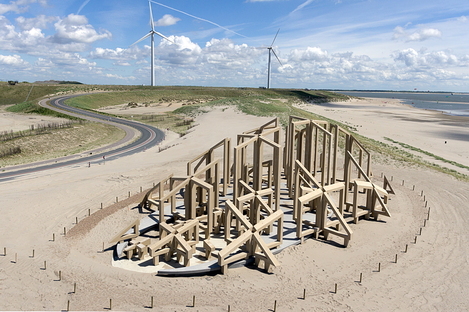