"The Vanished House" by Hu Quanchun of Field Confirming Studio is an artwork created for the second East Lake International Ecological Sculpture Biennale, held in Wuhan in 2021. The exhibition was held in Wuhan Shimenfeng Memorial Park, a cemetery in a beautiful natural setting with a serene, tranquil atmosphere. 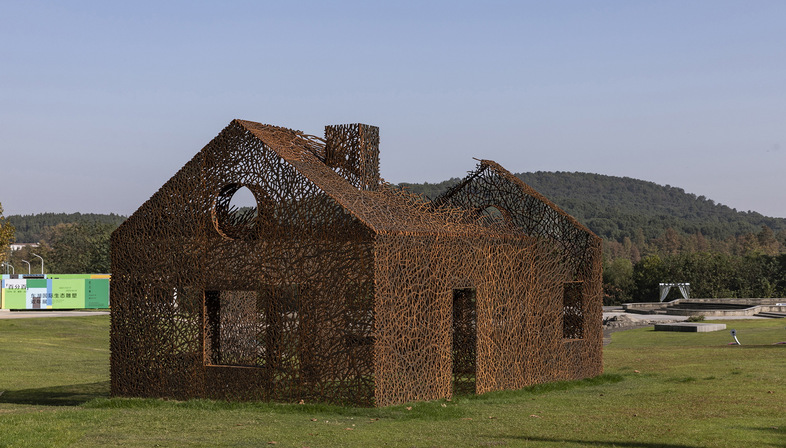 We were talking about cemeteries in this blog only a few days ago, discussing Battle y Roig’s experience near Barcelona mediating between the demands of the natural habitat and the human need to mourn the dead. It is important to find a place providing the right atmosphere for commemoration and mourning. "The Vanished House”, an artwork by Field Confirming Studio, an interdisciplinary design studio for the creation of public art and research in the design of public space under the direction of Hu Quanchun, was created precisely to respond to this need.
The project was proposed during the East Lake International Ecological Sculpture Biennale, an event first held in 2017 in Wuhan, in Hubei province, intended as the world’s first sustainable sculpture exhibition. The second edition of the event, postponed until March 2021, continued to reflect on environmental issues with works enquiring into the role new ecological technologies and materials can play in making the world more sustainable; the organising committee invited Chinese and international artists to present works in the city’s cemetery, Wuhan Shimenfeng Memorial Park.
"The Vanished House” is a work representing a house covered with ivy, in which the space is formed by the vines, recalling vanished living space in a clear reference to people and things of the past. The team chose a simple, archetypical house shape like a child’s sketch of a house, to which the patterns of sprawling creepers introduce more sophistication.
It was a matter of using climbing plants to convey the feeling of a house that had disappeared. To achieve this, the designers created a miniature cardboard version of the home on a scale of 1:10 and then sketched ivy onto this model to see how the plants would grow.
In this way the designers could also control the density and size of the vines, as well as the connections which practically form the walls of the structure. The designers report that “ the process of sketching was the most sentimental and exciting part of the creation and has brought a distinctive feature of handicrafts and paintings to the work.”
Hu Quanchun used Corten steel to build the sculpture, treated with a laser-cutting process. There are two reasons for this choice. The first is colour change: as it rusts, Corten steel turns crimson, a colour perfectly expressing the consistency of the climbing plants. The second is the fact that "The Vanished House" is a sculpture people can use, that is, enter and spend time inside; it therefore requires a certain strength to form a space that is permeable to light without relying on other structural forms. As Hu Quanchun comments: “The two-centimetre-thick Corten steel plates provide the structural strength required for the wall to support itself. Over time, the colour of the Corten steel plates will get darker with sunshine and rain, and the intention of this work will become increasingly prominent.”
The construction of “The Vanished House” was made possible by laser cutting and required meticulous manual conversion of files scanned in vectorial file mode, available for laser engraving, producing an inviting commemorative space. 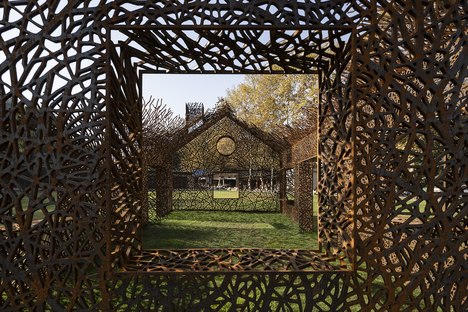 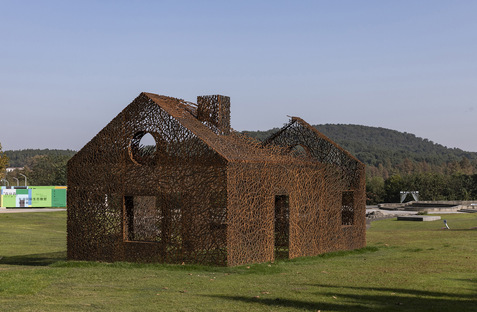 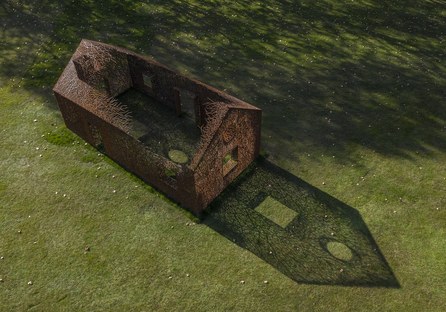 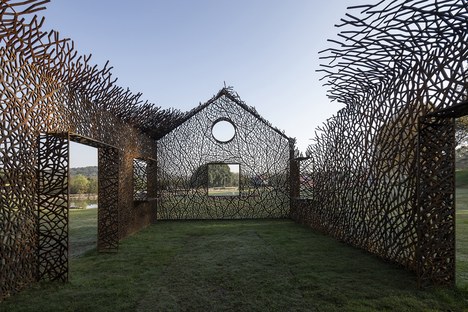 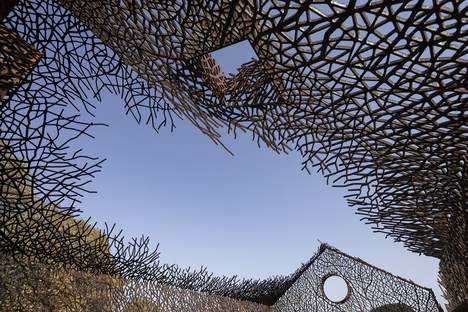 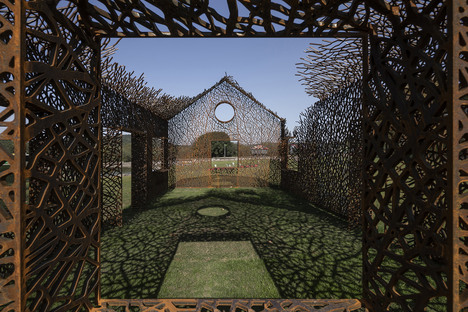 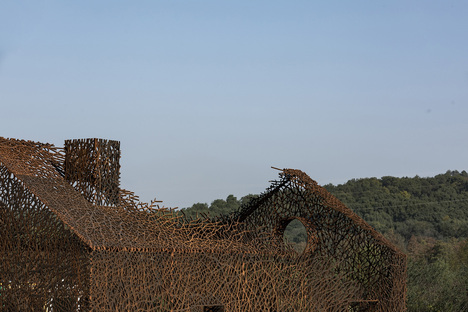 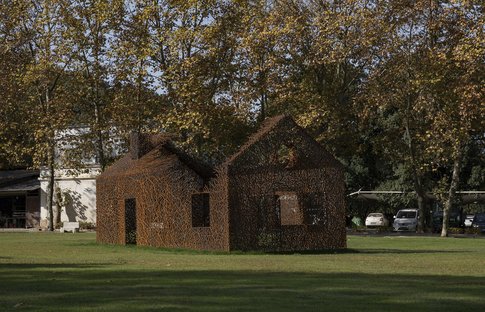 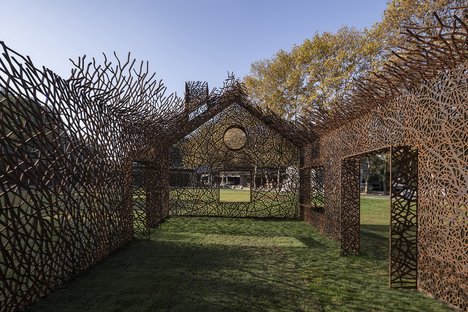 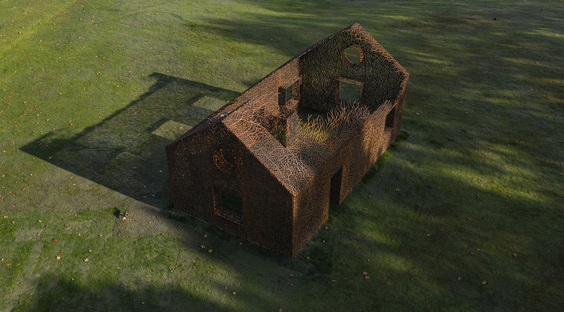 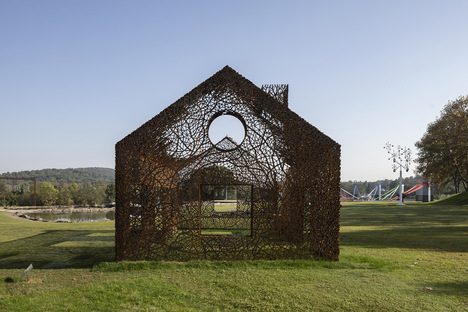 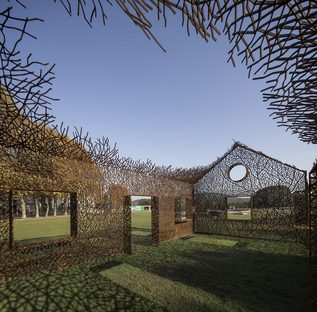 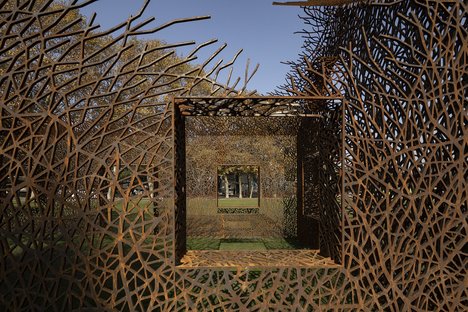