The Italian architecture studio, RECS Architects has designed an uncluttered, almost symbolic building in São Gonçalo do Amarante, Brazil: the showroom for a new smart city on the Atlantic coastline.

The Italian architecture studio, RECS Architects has designed an uncluttered, almost symbolic building in São Gonçalo do Amarante, Brazil: the showroom for a new smart city on the Atlantic coastline.


The architecture studio, RECS Architects, with offices in Parma, Dubai and Brazil has designed the showroom for the new residential district of Croatá, currently under construction in the municipality of São Gonçalo do Amarante, in the north-eastern state of Ceará, Brazil. São Gonçalo do Amarante was originally called Anacetaba in reference to Aldeia dos Anacés, the native population that originally inhabited the area, and it is located on the Atlantic coast, 55 kilometres from Fortaleza, the capital of Ceará state.
This particular building is positioned at the entrance to Croatà, a new-concept social smart city characterised by affordability and sustainability and has been designed as a flexible construction so that it can be repurposed after it has completed its function as a showroom for the municipal government.
ReCS is a portmanteau word invented by the studio that stands for Re City Size, which references a concept of redefining and re-thinking the dimension of a city. True to the meaning of their name, here, too the team from Recs Architects has conceived the urban space as a smart, inclusive, liveable and sustainable organism that engages with the community. These ideas are translated by the team under the leadership of Pier Maria Giordani and Mario Scaffardi, co-founders of RECS in an unadorned building, where the significance of each and every element is a reflection of its purpose.
The architects explain that the idea behind this project, which was then expressed in the architecture, “is of a space encapsulated between two slabs, recreating a public plaza, sheltered from the sun, a place whose concept is very public-focused”.
The external facade is “broken up” by six visual telescopes (seven if you include the showroom entrance), which are portrayed by large windows projecting outwards, to create advantageous viewpoints of Croatà and that, from inside, look like a series of screens showing real-life videos of the city under construction.
Designers who formulate and represent a personal idea, in this case, a plain building constructed with only two architectural elements - the slab and the telescope windows - have a great responsibility on their shoulders. Which is also a duty, in the words of the RECS team: “Architects force others to live in their art, unlike painters or sculptors, so they have to take responsibility for their actions…”
When it comes to the Croatà Sales Center, the initiative of RECS is rooted in the modernist tradition of Brazil. The marked material substance of the showroom is reminiscent of this, without neglecting the strong connection with the context where the geometric volume lightly stands. The pavilion blurs the lines between sea and sky and stands as an architectural backdrop that frames the city of Croatà in the making. 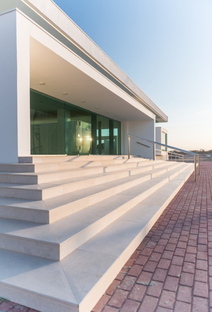