One of the regular fixtures of the Fuorisalone, and also of Milan Design Week 2021, was and is the exhibition-event Interni Creative Connections, which is still open until 19 September. Among the participants is Peter Pichler Architecture with the Vertical Chalets installation, based on his design for the Six Senses Kitzbühel Alps hotel. 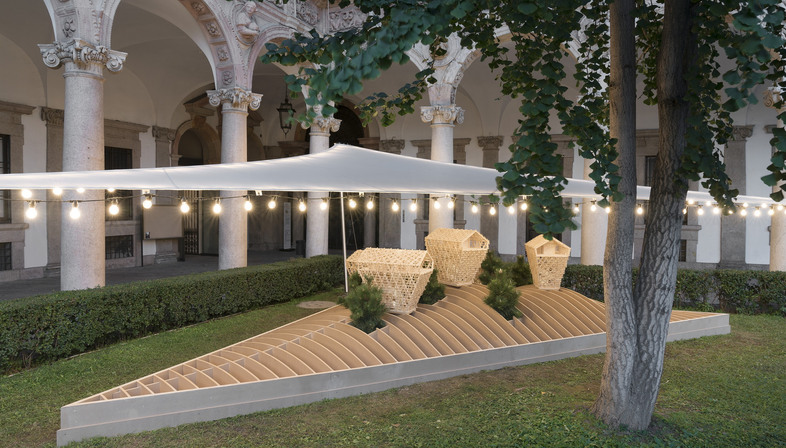 The inner courtyard of the Università degli Studi di Milano Ca' Granda once again this year featured the stars of the world of architecture, with installations having great visual impact. These include the Peter Pichler Architecture studio, known to our audience for its works that pay great attention to the environmental context of its projects, such as the Oberholz Mountain shelter, or its Future Space installation, also at the same venue during the Fuorisalone 2017.
This year's installation, on the other hand, offers a small-scale representation of the so-called "Vertical Chaletss”. These are the result of a radical hospitality project that Peter Pichler Architecture has developed for the Alpine region and is now implementing for the first time for a hotel near Kitzbühel in Austria.
The five 1/20th scale models that can still be admired until 19 September in the courtyard of Milan's Università Statale are handcrafted pieces created by model maker Antonio La Colla. The prototype structures take their inspiration from the local vernacular architecture of Kitzbühel, reinterpreting it in a contemporary way. The connection between humans and nature is a key criterion in this project. This is because the architecture in question is designed to activate and amplify the human senses through the use of simple, local materials, so that a new spatial experience can be enjoyed in the environmental context in which the artefacts are placed.
In detail, the installation consists of a platform reminiscent of a mountain landscape, made up of wooden strips with an 18 mm section, interlocked and glued together. The five chalets, on the other hand, were made of spruce. The structure consists of a diagrid exoskeleton encased in a second 'skin' of overlapping wooden slats, designed to filter light into the living spaces and ensure privacy. This design solution creates an extraordinary spatial experience, similar to a bird's nest. In fact, during the day the structure filters the sunlight and creates a joyful effect of light and shadow, while at night it allows the houses to transform into lanterns in a forest. The prototype models thus become a tangible example of the project that Peter Pichler Architecture has presented in Austria as a radical, innovative approach to sustainability and a new form of tourism, in which the relationship between man and nature is fundamental, but the harmonious integration of structures in space is also considered.
The Vertical Chalets in Kitzbühel will serve as “stand-alone” suites to a hotel in the forest, where the shared spaces and facilities are located. Each chalet will have different dimensions and will be raised above the ground, thereby allowing people to live at treetop height. We can already sense that it must be something spectacular, thanks to the installation created for Fuorisalone 2021. 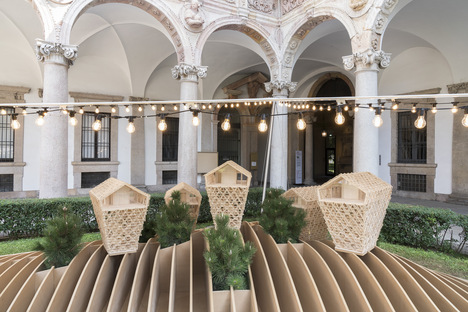 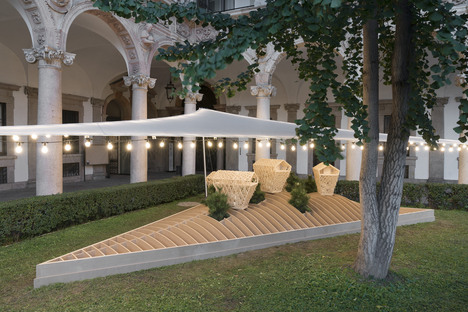 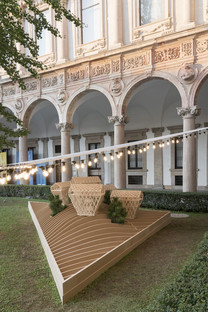 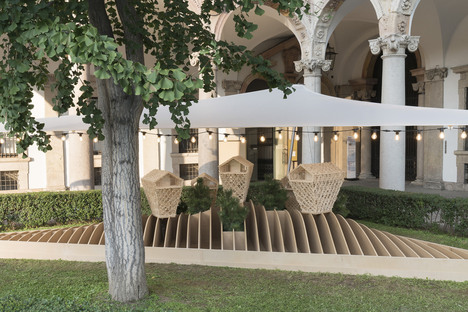 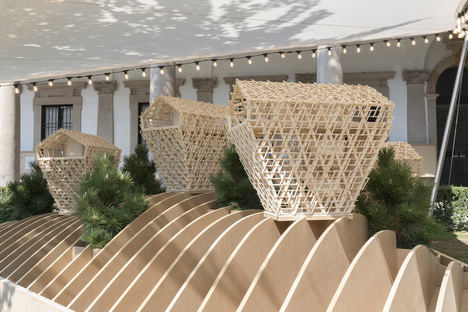 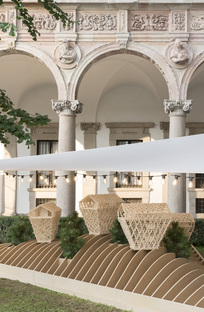