The architecture firm of Peter Pichler designed the recently opened Hotel Milla Montis in Maranza, South Tyrol. Architecture inspired by the local vernacular, by the majestic Dolomites landscape, and using locally sourced materials so guests can enjoy a holiday with low environmental impact. 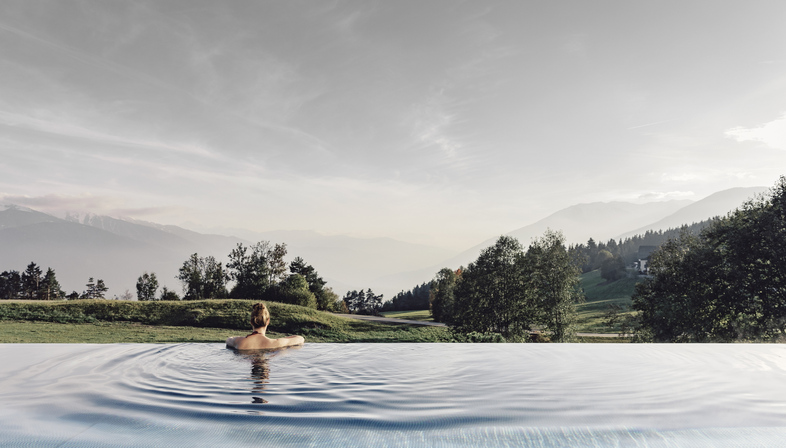 After a year that came out of the left field, it’s nice to think of a possible holiday destination. And even better if you add iconic architecture into the equation and respect for the natural environment with design solutions aimed at complying with sustainability requirements that are now part of our charter of ethics to boot.
The Hotel Milla Montis is a virtuous example of this approach. This is a kind of offshoot for the Oberhofer family, who were already operating a guesthouse in a remodelled old mill in the Pustatal valley. The Hotel Milla Montis stems from the desire to construct a hotel in Maranza that could build a bridge between the region's deeply rooted traditions and the expressive power of contemporary architecture. The Milanese architect Peter Pichler won the competition-by-invitation launched in 2019, and the hotel opened in October, adding an architectural landmark to the zone. Because this was a fundamental requirement for the clients, who expressly asked for a reinterpretation of the origins of the alpine home, which would stand out from the other buildings without overwhelming the landscape of Maranza, a favourite destination for hikers, providing breathtaking views of the Dolomites.
Peter Pichler’s proposal splits the new hotel structure into four staggered volumes to break down the entire establishment's dimensions. This is an intelligent way of reducing the facility's visual impact and respecting the scale of the surrounding buildings.
The whole thing is an interpretation of the region’s vernacular and the traditional wooden barn-like buildings, with a contemporary twist.
The sweeping arches of the building envelope’s facade that also features large windows are a nod to the pitchforks used by local farmers. This is a tribute to the farming tradition of Maranza, where many of the locals venture into tourist operations simply to supplement their work on the land. By the same token, this proposal makes it possible to create an open, minimalist design where the facade shape's charred-wood style creates an unmistakable image of the whole.
Peter Pichler also designed the simple, functional hotel interiors that offer up a timeless alpine style, based on locally-sourced materials. The skilful mixing and matching of light ash wood furniture and green loden textiles add a splash of colour to the rooms and continue the surrounding landscape's natural colour palette.
Wood is the leading player in this project, both externally and internally, with a marked contrast between the charred wood on the outside and the light wood on the inside.
The Hotel Milla Montis designed by Peter Pichler confirms the painstaking attention of the Milan-based firm to the natural settings of their understated architecture and to the use of local materials and traditions, at the same time adding that contemporary touch that sets apart the projects of our times. 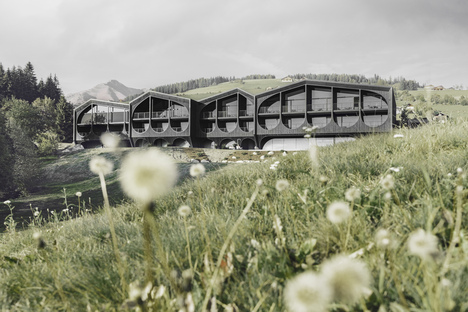 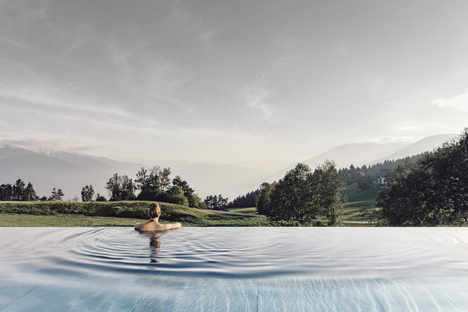 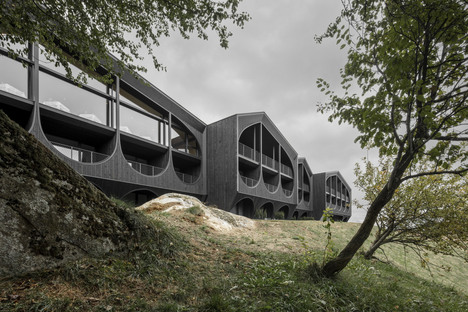 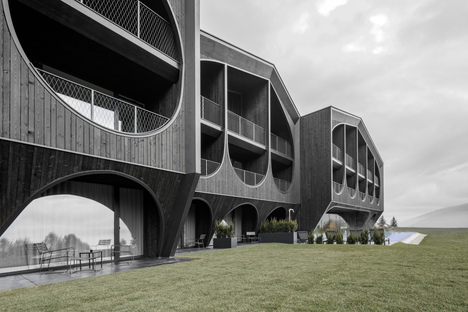 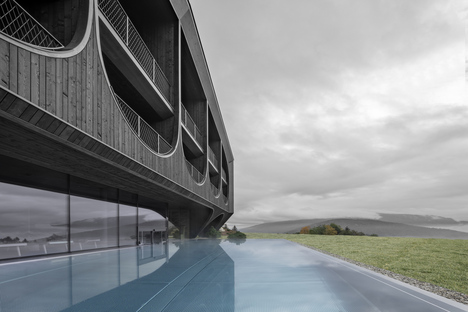 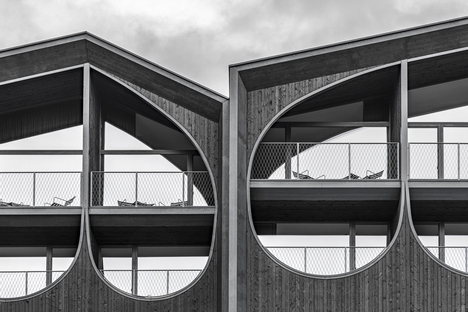 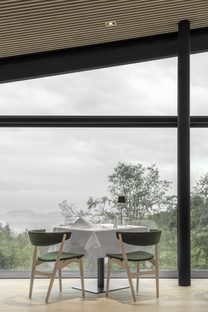 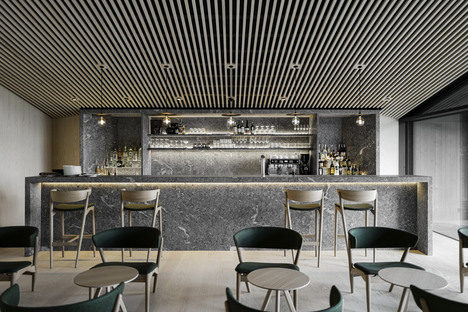 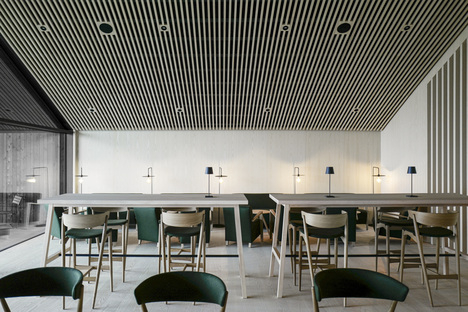 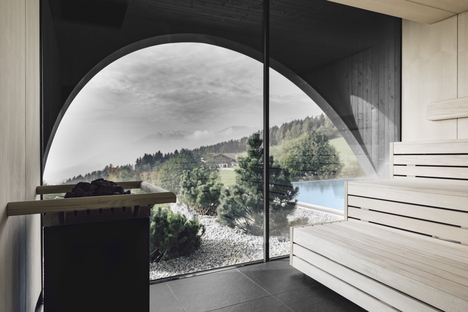 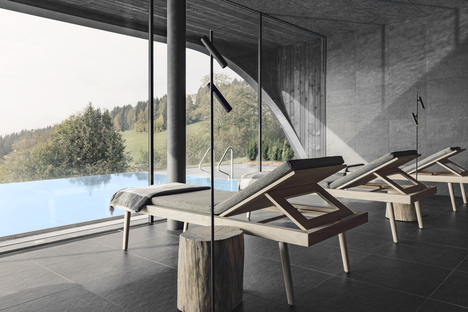 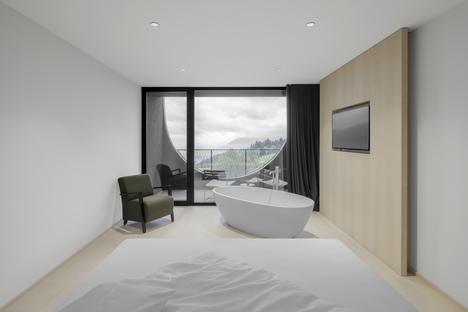 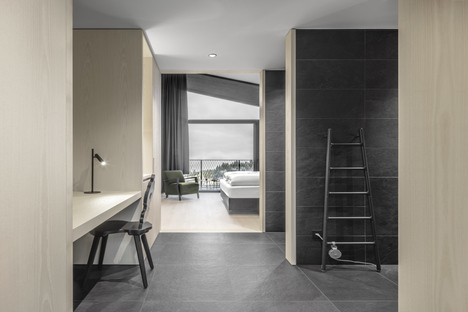 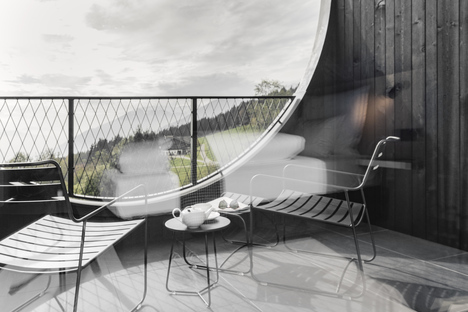