The Moon Garden is the last lot in a project commissioned by Iper Montebello Spa, designed by Charles Jencks and Andreas Kipar and developed by LAND Italia on the former Alfa Romeo industrial site at Portello. This final lot concludes a process that began more than 20 years ago, bringing the size of the park up to a total of about 73 thousand square metres. If a circle is a measure of time, the completion of work on Portello Park closes a lot of circles. It all started more than 20 years ago with the commitment of Ennio Brion, a unique promoter of quality architecture and design, with two brilliant minds, Gino Valle and Charles Jencks, and now the people of Milan can finally enjoy this landmark in memory of the former Alfa Romeo factory in its entirety.
Alfa Romeo Industrial Park at Portello is located on the site of the first Alfa Romeo factory, in operation between 1906 and 1986 in Milan’s Portello district. The industrial zone was built on a vast yard bordering on the areas that hosted the Expo 1906 pavilions, in a space in the open countryside to the northwest of the city. The site has once again found its vocation for landscape thanks to the initiative of IPER MONTEBELLO S.p.a., a company owned by Marco Brunelli, the entrepreneur who appointed LAND to prepare the final landscaping project, implemented in lots in 2009-10. The first part was opened to the public in 2011, followed by a second lot in 2015 and another in 2017. Andreas Kipar, with LAND S.r.l. and great American landscape architect Charles Jencks, the principal theoretician of Modernist and Postmodernist landscape architecture, who passed away in 2009, designed the park on the basis of a series of circular lines in space forming the lines of construction of the three "green sculptures": Mound1, Mound2, and Mound3, which, along with a little Time Garden, represent different periods in time: Prehistory, History, the Present, and individual time. Andreas Kipar explains the gesture as follows: "An interweaving of circles and lines that echo the course of time, both circular and linear, repetitive like the heartbeat and sequential like evolution."
From a morphological point of view, the park is developed at different heights, recovered through a system of paths called Time Walk. In a broader perspective of relationship with the city, Portello Park is also part of a green system of pedestrian and cycling paths, the Green Rays which pass beyond the ring roads to connect the centre of Milan with the hinterland.
In a ceremony held on 23 November 2022, the final lot, between Viale Serra to the southeast, Viale De Gasperi to the southwest and the existing park to the north, was returned to the public. The inspiration for the design of this part of the park comes from the heavenly bodies of the Sun and the Moon and how they interact with the Earth, inspiring the name of the new part of the park: Moon Garden. Its shape is inspired by Athanasius Kircher’s diagram illustrating the “Phases of the Moon”, representing the cycle of the moon as a double spiral, for both hemispheres of the earth, in which these forms portray the duration of the Moon’s visibility in the sky, as it rises and sets. The rising spiral path of the park incorporates shady rest areas with benches. Fifty trees, including maples, tulip trees, linden trees, mulberry trees and Japanese pagoda trees, alternate with 1,500 square metres of colourful flower beds planted with herbaceous plants and bushes and groups of rhododendrons.
Moderation of the park and the entire redevelopment process was guided by the principles of Charles Jencks, whose project is his legacy for the people of Milan: a park where they can feel free to experience the rhythm of time. Because, as Jencks himself wrote in 2009, "Landscapes and gardens always bear the imprint of time on their surfaces, in their growth and decay“. 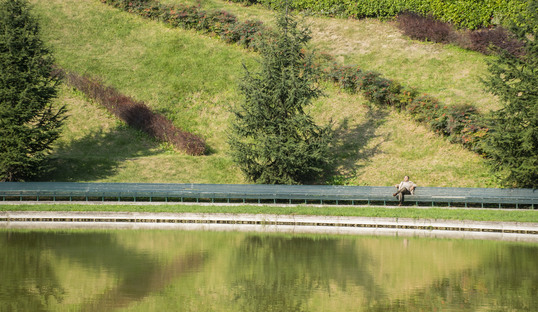 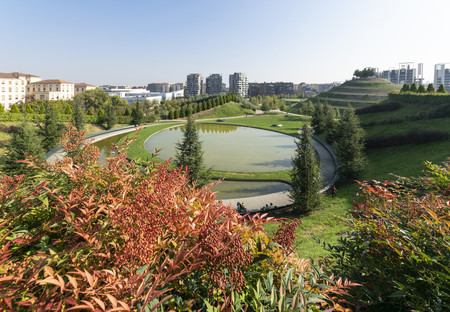 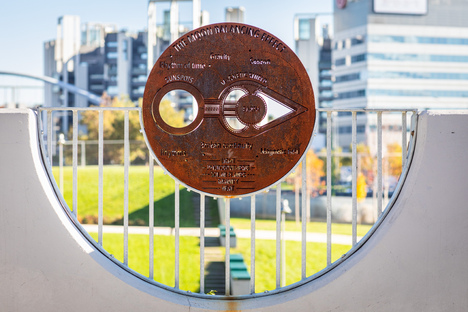 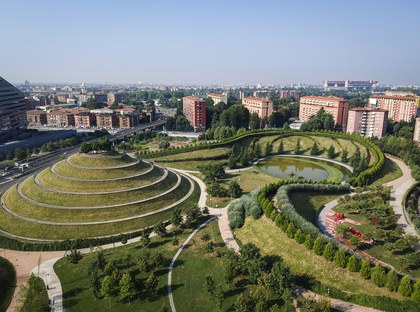 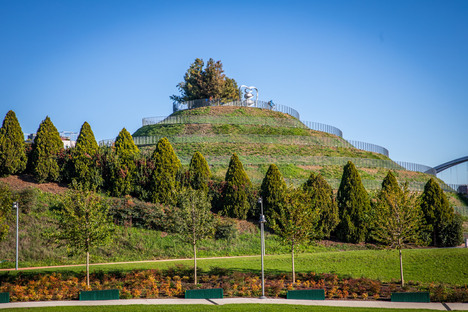 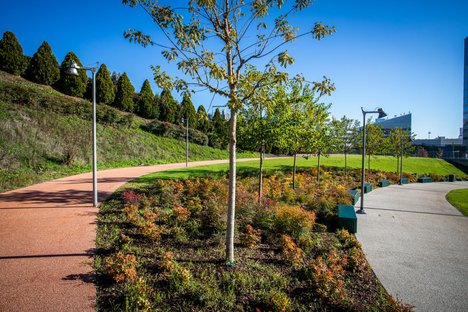 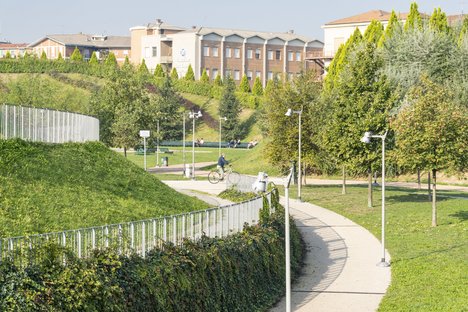