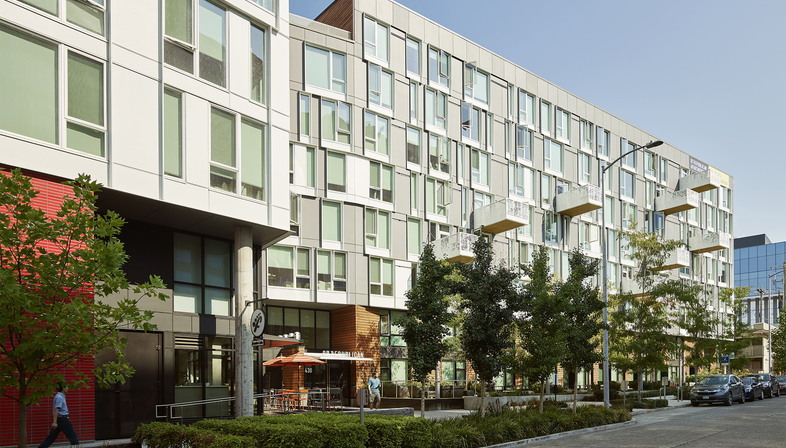 In its early days, South Lake Union was home to mill workers and a key industrial centre for Seattle; it fell into decline after the trees were all cleared but is now transitioning towards a hip neighbourhood with a real tech vibe, not least of which is due to places like the Amazon headquarters (link) and other top biotech industries and organisations.
The rapid growth forecast for Seattle, with over 70,000 new housing units to be developed within the city limits over the next 20 years will shape the city’s public space. Which is why being sensitive to urban development that can combine the interests of both the private and the public sector is becoming an important asset. And this is the approach that Seattle-based The Miller Hull Partnership, founded in 1977 by David Miller and Robert Hull has been pursuing for many years; it specialises in performance-based designs and is widely recognized for projects that actively engage the site and their communities.
The 8th & Republican Mixed-Use Development, crafted in partnership with Runberg Architecture Group is located along the Republican Street commercial corridor and 8th Avenue, a bustling residential street. The new complex includes 211 apartments, a photographic equipment showroom and a small neighbourhood café on a pedestrian-oriented street.
From the start, the exterior public space formed by the building was at the heart of the project. “It all came together when we realized that by configuring the building diagonally across the site, we were able to provide more units and a public space”, said Mike Jobes, principal at Miller Hull and design principal on the project.
The building was set back from the street at mid-block provides a generous public courtyard, the backdrop for a well-loved neighbourhood café and patio with a participatory, community water feature, which doubles as an on-site stormwater infrastructure. This dynamic composition of the public space enables the building façades to remain simple and cost-effective while positively impacting the public realm, foregoing more expensive façade modulation typically required by Seattle’s Design Review Board.
The topography of Seattle was used as the inspiration to shape the building’s bulk around a generous neighbourhood green space, with the Megastoop, an elevated public walkway traversing a large bio-retention rain garden through a grove of trees. The eight-story concrete building forms the backdrop for a green pocket park similar to the Cascade Mountains rising behind green foothills.
The 8th & Republican Mixed-Use Development is doubly sustainable. So the strategic selection of construction systems played a big role in the financial viability of this building for the developer. Type l post-tensioned concrete was chosen for its reduced structural depth, enabling the addition of an extra floor and another 29 apartments. Between concrete slabs, exterior non-bearing walls are framed in wood in lieu of light-gauge metal to reduce thermal bridging and the need for expensive exterior insulation to exceed energy code requirements.
This new urban reality is a virtuous example of urban development that focuses on the overall wellbeing of the community it sits in, also receiving an AIA Seattle Honourable Mention in 2018, for good reason. 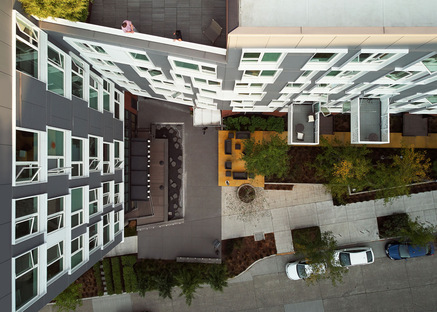 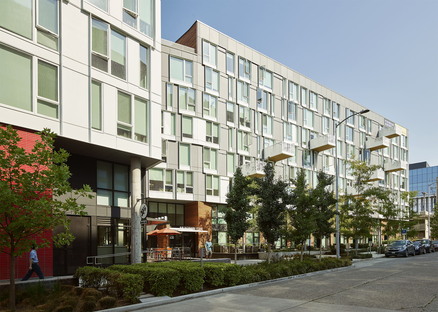 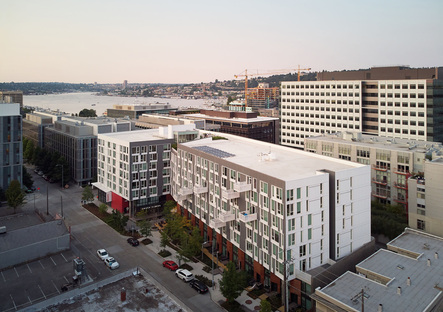 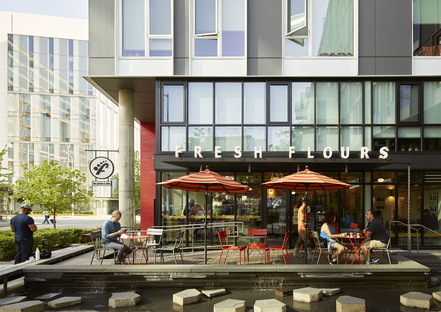 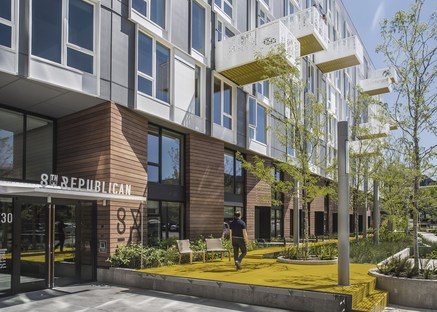 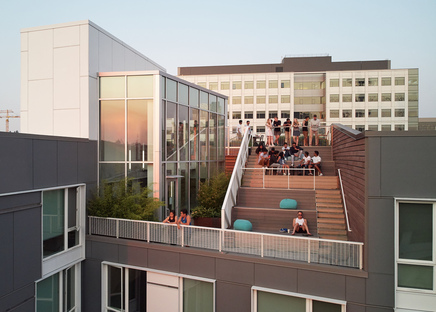 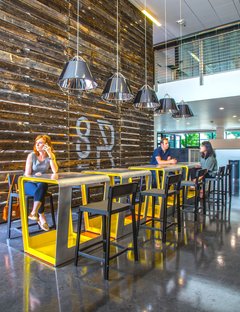 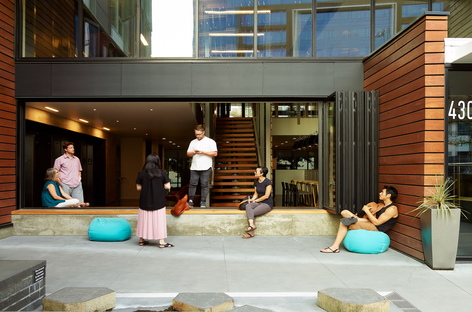 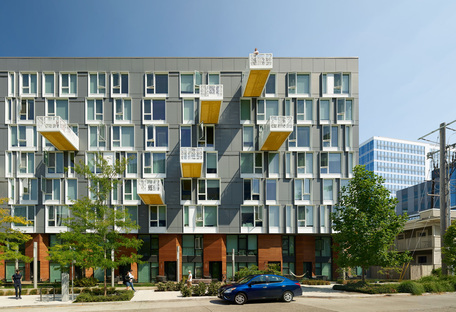 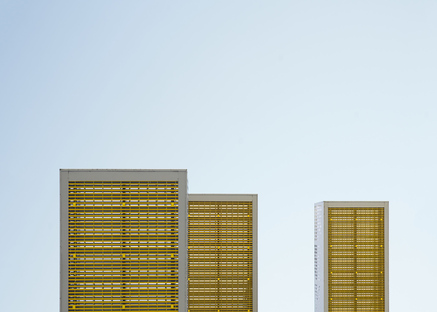 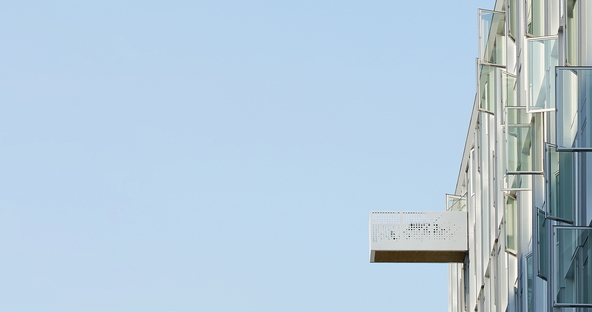 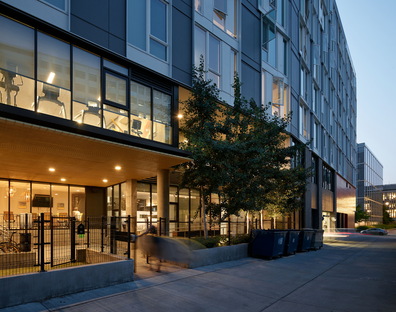 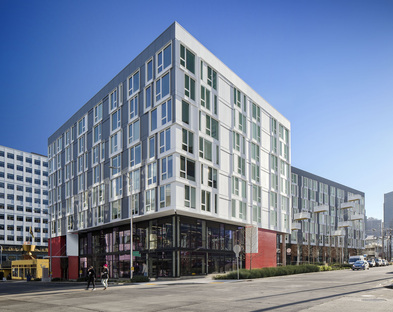 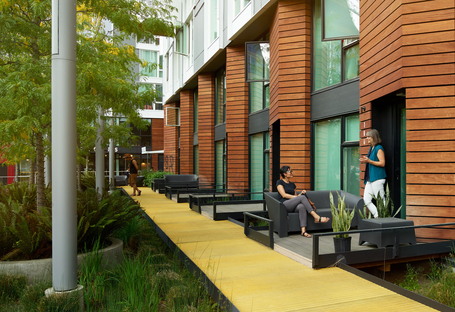