Living Theatre Mount is the name of the work designed by the Chinese Wutopia Lab architecture studio for the demonstration area of the Vanke Cloud Valley project for builder Xuzhou Vanke. A multifunctional building that serves both as an exhibition space to showcase the new neighbourhood under construction, as well as an element of urban connection. A place that fosters social interaction between new and old residents. 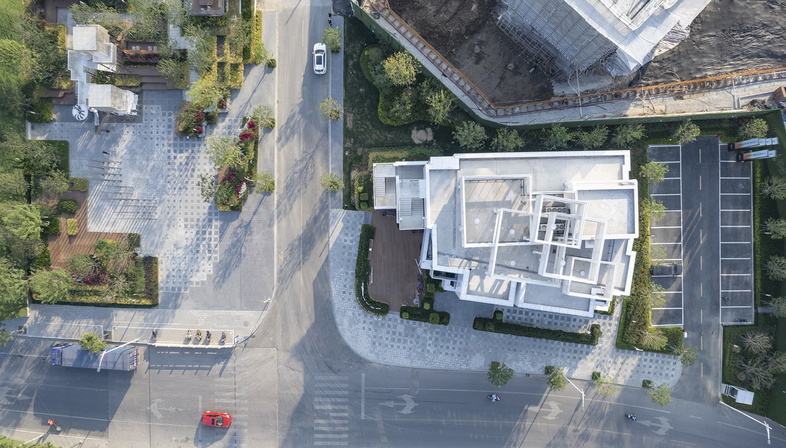 The Living Theatre Mount by Wutopia Lab is an exhibition space for meetings and events, created by builder Xuzhou Vanke in the Chinese province of Jiangsu. A city with a thousand-year history, but unlike what is often done, designers from the Wutopia Lab architecture firm directed by Yu Ting have approached the project from a social point of view: namely emphasising the connections between the people who will come to live here, rather than revisiting a glorious past.
An approach that has led to creating a sort of stage for the people who will live in this new neighbourhood, not least in response to the challenging years of the pandemic, with its restrictions on interpersonal contact. In short, this is not your typical self-congratulatory centre, as these architectures that often play the role of a showcase of the city to come typically are but, rather, a project that opens up to the neighbourhood’s new citizens.
Living Theatre Mount stands on a narrow, trapezoidal portion of land on the border of the old and new cities in northwestern Jiangsu province. The total construction area of the prototype, including two sets of sample houses, is only 1000 square meters. Considering that the height limit was set at three stories, there was not much space for additional uses. A condition that stimulated Wutopia Lab’s creativity, which began by re-analysing the programs and circulations of Vanke’s sales centre and their classification, yet opting to categorise them differently. Thus, around a shared central space that extends over three floors, we find the other functions designed as "plug-ins": the audiovisual hall, the office, the model room, the tea room, the café, the VIP reception, the internal garden and other spaces are all "boxes", connected to the large space.
A solution also reflected in the shape of the architecture, as these "plug-ins" have large windows or balconies, in reference to the image of the stage. A set of side stages that does not occupy floor space then appears on the façade. In addition, these boxes on the façade are no longer just a box, becoming showcases, or stages for "a scene from everyday life", as architect Yu Ting writes. Together, they become a mountain where the theatre of life takes place, the Living Theatre Mount.
To get around the 3-story height limit that would have negatively affected the "mountain effect", turning it into a flat roof, the architects continued to use the boxes even on the roof. The typical aspect of a stepped "mountain" thus took shape which, at least as far as Wutopia Lab intended, was conceived to be used by people who would be able to "walk up the steps to the top, where they could look around and appreciate the beauty of the landscape". In the end, due to both legislative and budget restrictions the boxes that form the top are unfortunately not walkable, but at least they make it possible to conceal the technological systems and equipment on the roof.
The appearance of this multifunctional work lends itself to multiple interpretations, from a mountain to a "data cloud". The main building creates a solid volume through metal panels and glass, while the pavilion, including the fire escape connected to the building, creates a lighter, more imaginary shape with perforated aluminium panels.
The Living Theatre Mount, with its mix between monumentality and everyday life, is an architecture that certainly makes an impression, succeeding in its ambitious intent to connect the present to the future and to bring people closer to each other, far beyond the classic sales centre. 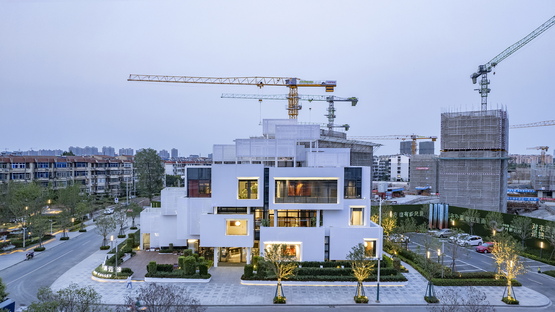 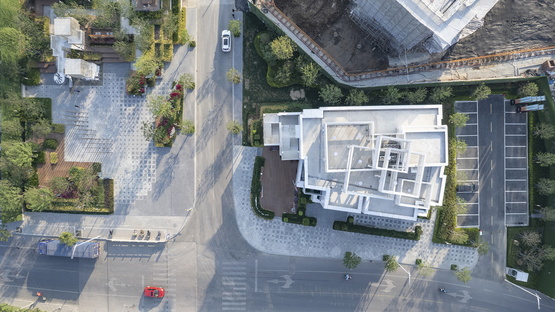 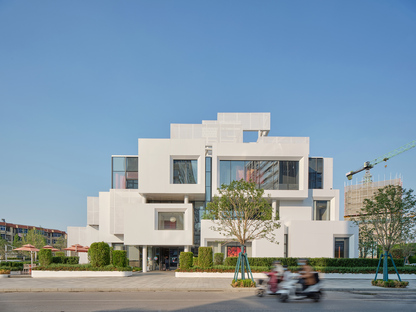 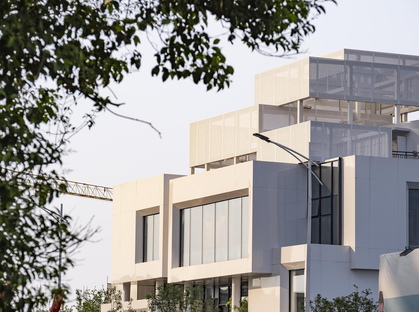 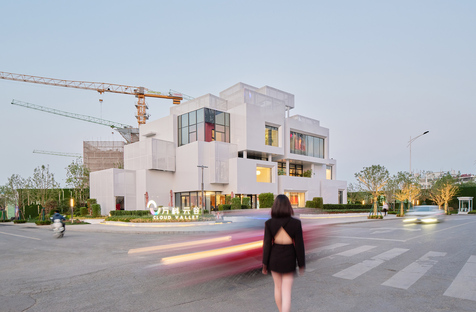 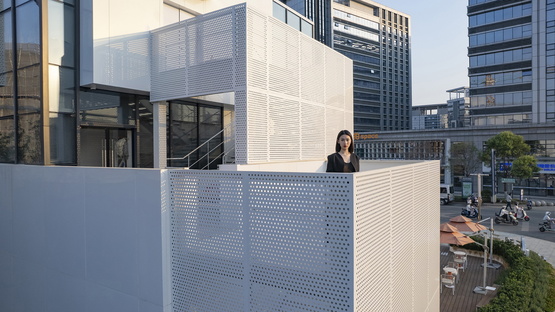 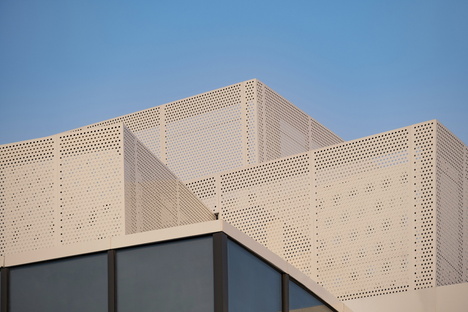 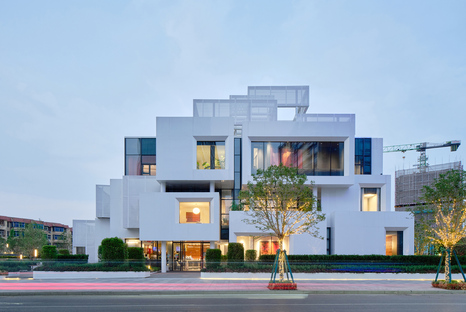 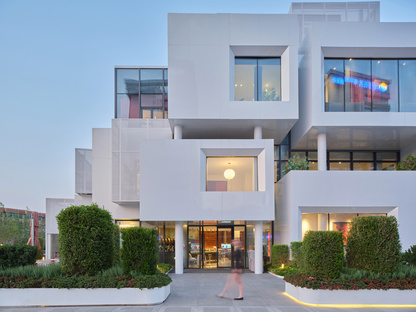 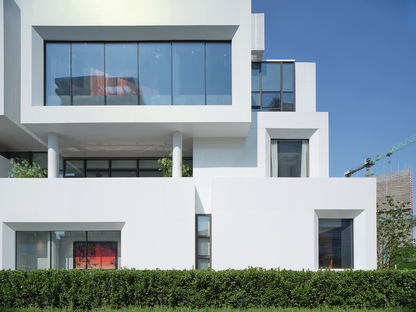 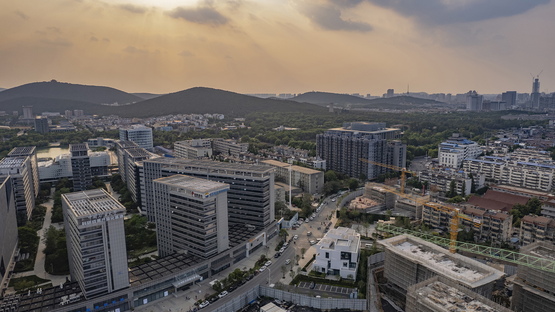 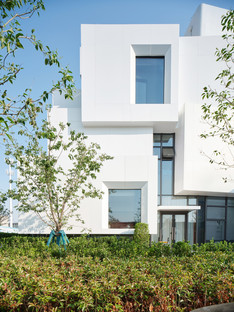 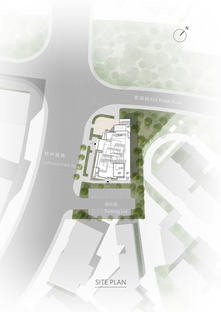