The French artist Jacques Toussaint has created a new site-specific work from his "L'Esprit des Lieux" series for the church of Santa Maria Assunta in Riola di Vergato (1976-1978), designed by Finnish architect Alvar Aalto and constructed after a long labour of love.

The church of Santa Maria Assunta in Riola di Vergato (1976-1978) is the only building in Italy designed by the renowned Finnish architect and designer Alvar Aalto. Floornature readers are familiar with it through the documentary “Non abbiamo sete di scenografie. La lunga storia della chiesa di Alvar Aalto a Riola” (We do not thirst after scenography. The long story of Alvar Aalto’s church in Riola) made by architecture and design journalist Mara Corradi with cameraman and director Roberto Ronchi.
The location has now attracted the interest of Jacques Toussaint, a French artist who has lived and worked in Italy since the 1970s. In the early two-thousands, the artist began creating a series of site-specific art projects in historical buildings, crafting video installations and immersive spaces to interpret the site. These works, entitled L'Esprit des Lieux, are expressed in several chapters often focused on religious buildings rich in history such as the former convent of San Francesco in Pordenone, the church of San Francesco in Como, the Valmarana Chapel by Andrea Palladio in the church of Santa Corona in Vicenza, the architectural complex of the Seven Churches in Bologna and the Oratory of San Francesco in Crespellano. He has now come to Riola, and Alvar Aalto’s church. Because for a while now, Toussaint has been attracted by modern architecture and its minimalist spaces, for the most part, devoid of ornamentation.
The church of Santa Maria Assunta was designed to meet the needs of the small community of Riola in the valley of the Reno River in the Apennines. It was certainly not intended to be a showcase of monumentalism. After seeing some of his work exhibited in Florence, and appreciating his innovative, human-centred approach that respected nature, the Archbishop of Bologna, Cardinal Giacomo Lercaro, commissioned the architect Alvar Aalto (1898-1976) to design a small church. The result is a deceptively simple building, the end result of the Finnish master’s extensive research into religious architecture. The plan has an unusual roof system consisting of stepped, longitudinal vault fragments inclined towards the chancel. The vertical surfaces of the vaults are glazed so that the whole church is bathed in light - typically associated with Aalto’s work - reflected by the white vaults. The vault system, which rises at ground level from one of the long walls, is borne by seven gently curved, asymmetrical concrete arches.
“L’Esprit des Lieux” by Jacques Toussaint, which can be seen from today (24th) until 26th January as part of Arte Fiera Bologna, allows for a discreet, timely intervention with total respect for the Church of Santa Maria Assunta. The French artist adds a few art elements to bring out the building’s great architectural qualities, using a medium that he includes in all his installations - electric blue light emitted by neon tubes with body-coloured glass. The purpose is to draw the visitor’s eye towards the 12 small crosses - which represent the 12 apostles in Alvar Aalto’s design - on the pillars to the right and left of the nave. A video projection, also using blue light accentuates the large wooden crucifix designed by Aalto, which will be flanked for the occasion by two silver-plated glass crosses set on either side of the altar. In the baptistery area, which Aalto positioned to the right of the chancel, overlooking the Reno River is a water-themed video, where the flowing images follow the direction of the river current, completing the artwork.
“L’Esprit des Lieux” in Riola di Vergato is a real must for all lovers of modern architecture and site-specific installations. It is also an excellent excuse to visit the only architecture in Italy - apart from the Finnish pavilion in the Bienniale Giardini - designed by Alvar Aalto. 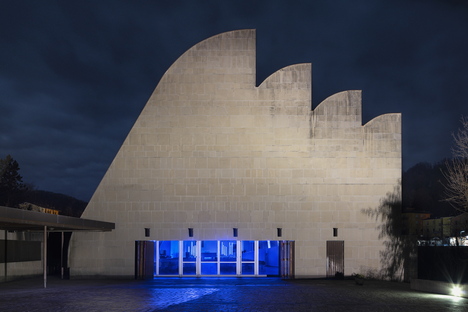 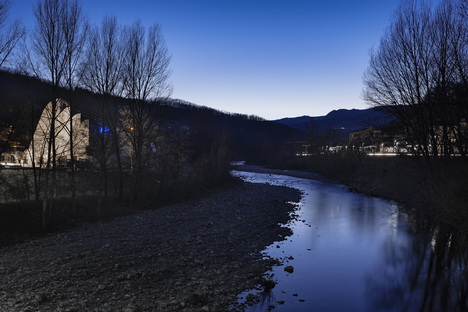 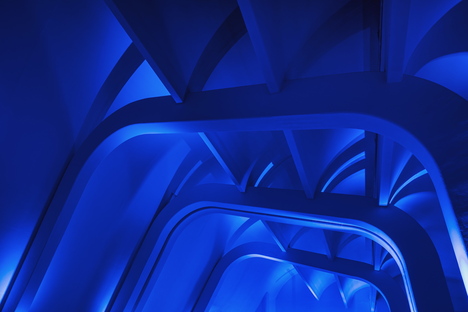 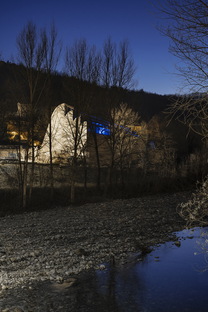 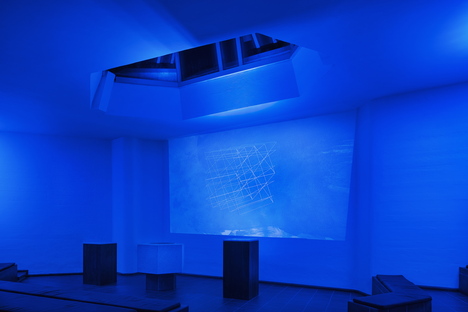 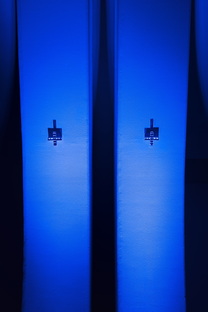 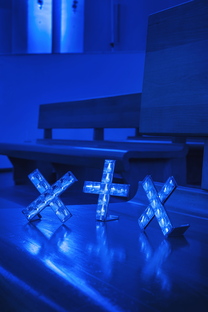 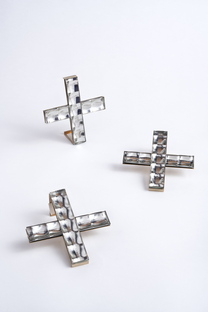 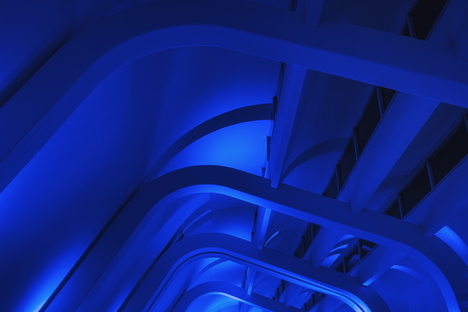 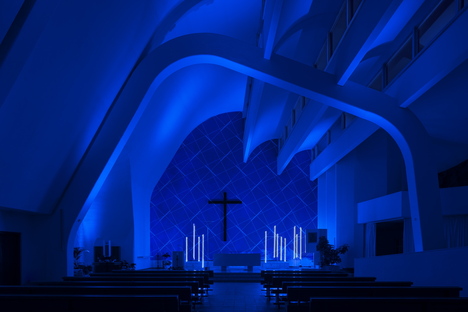 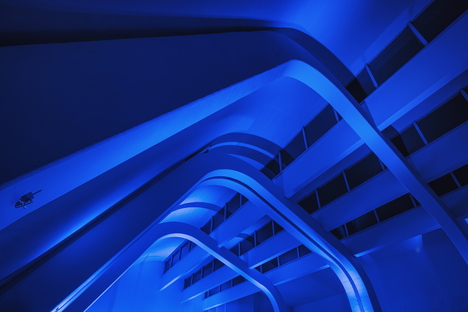 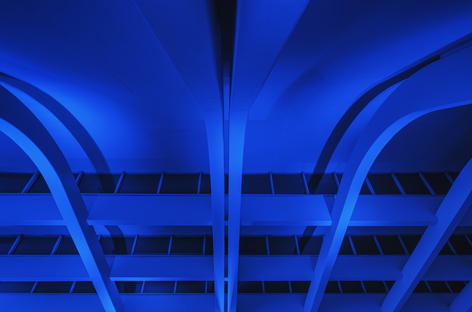 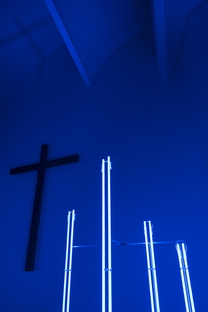