Architect Claudia Storelli presents the event and exhibition “Impossible Dialogues” in the historic centre of Bisceglie, in Puglia. Her art project establishing apparently impossible dialogues between two different works of art first began on the internet, but now comes to one of the narrow lanes of the artist’s hometown, in the attempt to establish a new dialogue between the citizenry and an abandoned part of the town centre. Can digital technologies help promote Culture with a capital “C”? Claudia Storelli, a young architect from Bisceglie with experience working for international architectural studios, is convinced that it can. And in fact her project “Impossible Dialogues” employs digital tools in both the creation and distribution of her artworks. The artist painstakingly assembles two different works of art widely known among the general public, putting them together to create something new. Her artworks arise out of connections, that is, impossible dialogues that cast a bridge between paintings and canvases that would initially appear to be very different, setting them in a new context so that the connections between the different elements seem always to have been there. Thus Dalì’s tigers leap out at Botticelli’s Venus, while Medusa’s raft, painted by Gericault, is overturned by Hokusai’s Great Wave. Storelli’s collages overcome the centuries separating two paintings and playfully interpret different currents in art history, creating a pleasing sense of alienation which encourages us to delve deeper. Because a bit of curiosity is all we need to find out more about the world of art, finding it to be much more interesting than it seemed at first impact, judging from school textbooks and field trips to museums!
Claudia Storelli now brings her project from the web to her hometown, Bisceglie in Puglia. From September 23 through 25, Vico de Luca, a tiny alleyway in the city’s historic centre, becomes an open-air art gallery exhibiting works from the Impossible Dialogues series. The alley is only minutes away from the Romanesque Cathedral of San Pietro Apostolo, in an architecturally prestigious area which is, however, “at the centre of an area that has been neglected by city planning policy for decades, cutting it off from local dynamics and turning the neighbourhood into one of the most decayed, abandoned parts of the town,” as the architect reports in a note for the press.
Depopulation and neglect are, unfortunately, common problems in Italy, and the exhibition encourages dialogue promoting cultural enhancement of the historic heritage of such places. Storelli’s approach begins with attentive analysis and in-depth respect for the urban context, with an installation in harmony with the look of the neighbourhood, blending into its white stone surfaces: “a wooden slat supporting a linen cloth is the basic element of the exhibition, evoking an image typical of the villages of Puglia, that of the balcony with laundry hung out to dry: an expression of domestic life, the only element remaining to keep these streets alive.”
Art has brought Vico de Luca back to life, at least for the duration of the exhibition and event. A red carpet consisting of orange netting on the ground guides curious visitors in discovery of the “impossible dialogues” created by Claudia Storelli. The area has been temporarily brought to life with the intention of encouraging possible dialogue about the fate and, above all, the potential of Bisceglie’s historic city centre: a wonderful example of art driving urban renewal, and of how a digital project can have concrete repercussions for the local area. The architect already experienced this positive effect in 2021, when she took her project to the deconsecrated Romanesque church of Santa Margherita, now a FAI property, attracting greater interest in the location among the citizenry as a result. 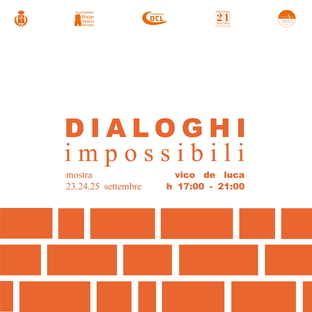 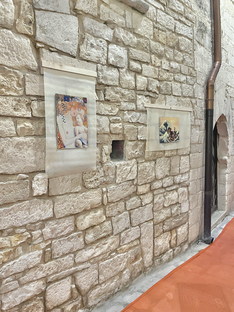 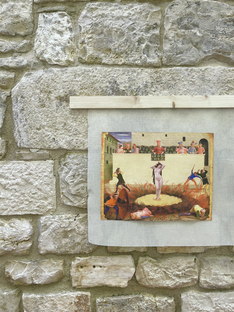 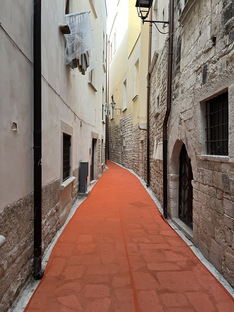 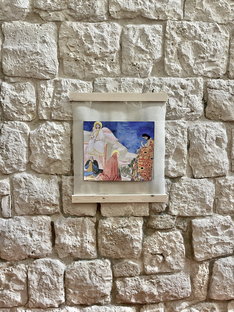 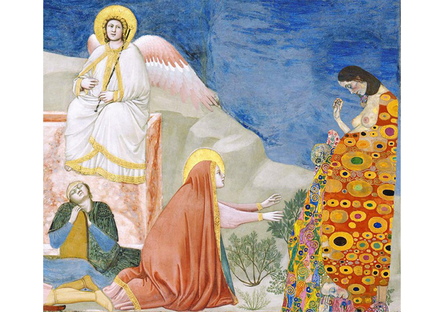