The Canadian EVOQ + ARTCAD studios have jointly created the expansion of the Chibougamau-Chapais Airport, the gateway to the Eeyou Istchee James Bay region in Québec, Canada. Emphasising its proximity to the Boreal Forest, the terminal's design showcases locally produced wood. 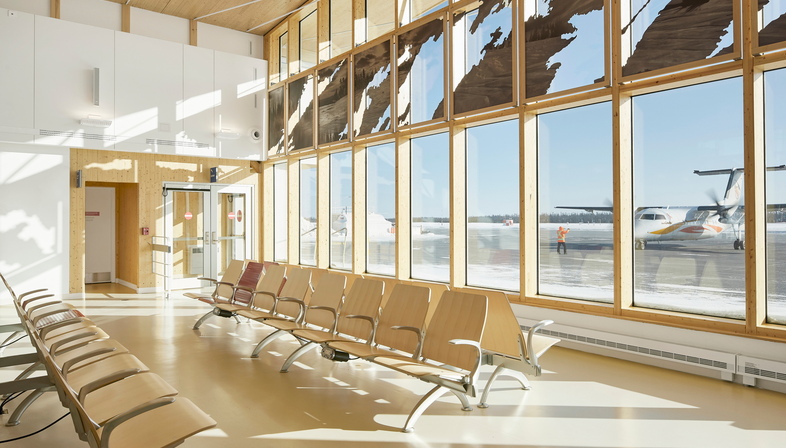 In Canada's vast territory, aircraft use is often the only way to connect with remote locations. Faced with growing demand, a new passenger terminal was needed at the Chibougamau-Chapais Airport, literally the gateway to the Eeyou Istchee James Bay region in northern Quebec, serving a large area that includes the communities of Chibougamau, Chapais and Oujé-Bougoumou.
As the designers, a joint team from the EVOQ and ARTCAD studios, explain "the new terminal was designed according to the latest standards in order to provide seamless passenger experiences and to express the aspirations and culture of the communities it services."
The new building is composed of two low structures on either side of a glazed concourse that connects all the terminal's functions and services. In addition, this linear element establishes a visual connection from the passenger parking lot to the runway, who can already see their aircraft on the runway.
The fluid aspect of this dynamic space and full of natural light, with a seamless and expert transition to the supporting artificial lighting, is further enhanced by the consistent use of materials combined with great attention to the local First Nations culture.
In fact, on the external façade of the new terminal we read the name of the airport in Cree and in French, adorned with an artwork by French artist Emmanuelle Gendron, which the designers have integrated into the transparency of the timber curtain walls. A tribute to the Eeyou Istchee region, a territory equivalent to a regional county municipality of Quebec, represented by the Grand Council of the Crees. Gendron's work was selected by a committee that included representatives from the communities of Chibougamau, Chapais and Oujé-Bougoumou.
In a project such as this, the choice of materials could only be dictated by the proximity to the boreal forest. Locally sourced wood, and in particular high-performance products such as glulam and cross-laminated timber (CLT) structural slabs, in fact are the protagonists of the new terminal. The waiting area is delimited on three sides by timber curtain walls, topped by a raised roof that forms a south-facing clerestory. The roof structure combines wood and steel components. The stressed CLT panels, which extend for 12 metres, are supported by wooden columns at each end, reinforced by high-strength steel bars that connect the centre to the ends.
Thanks to the mixed structural system used, EVOQ and ARTCAD propose an architecture that surprises when it comes to its size, creating an open public space. The system also makes it possible to reduce the thickness of the roof, while contributing to the interior shading strategy thanks to its generous overhangs protecting the façades. A solution which therefore ensures natural light and better energy efficiency. In addition, as the architects explain, this solution "contributes to the structural bracing, while the clerestory acts as a load-bearing axis, eliminating the need for a structural beam."
Thanks to this minimalist and highly efficient approach, the fundamental principles of the project are underlined: transparency, lightness, comfort and functionality for the Chibougamau-Chapai Airport. 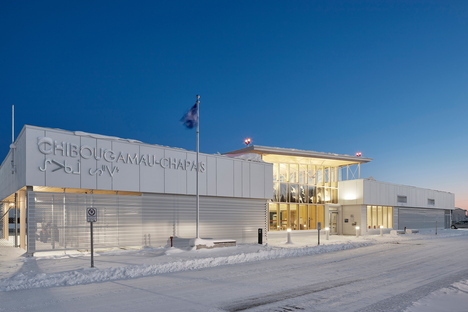 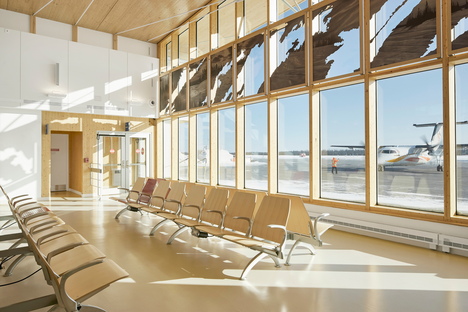 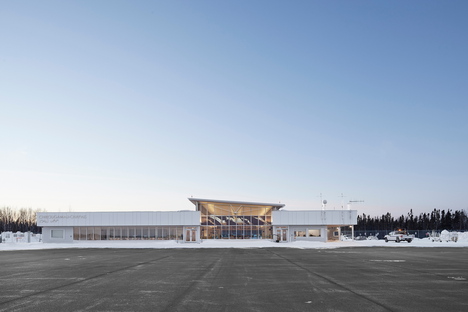 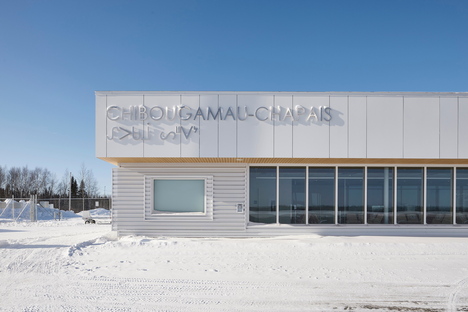 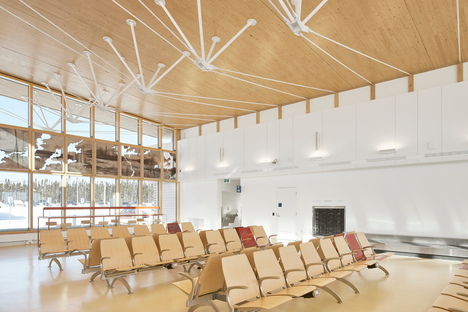 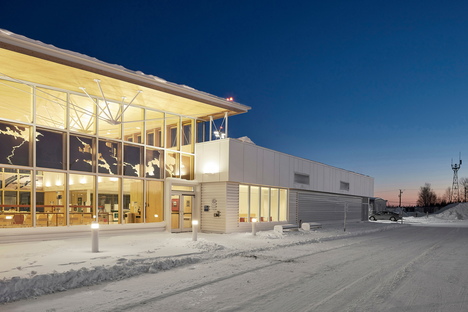 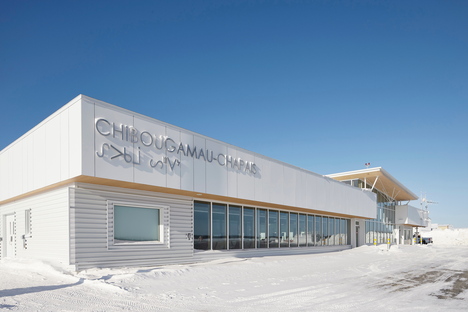 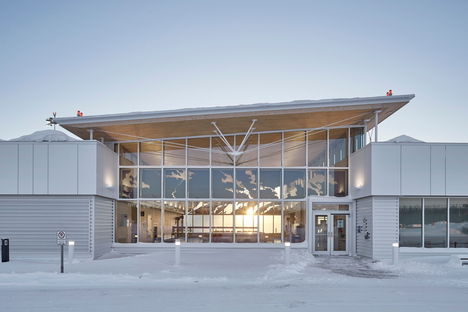 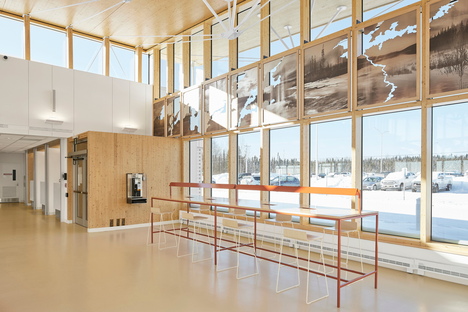 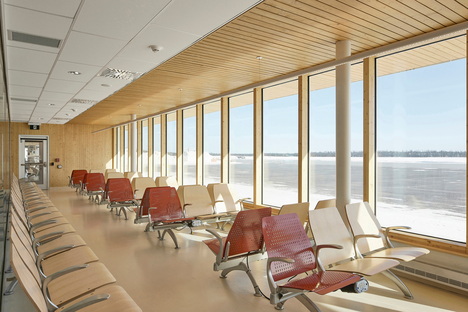 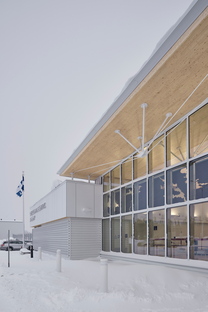 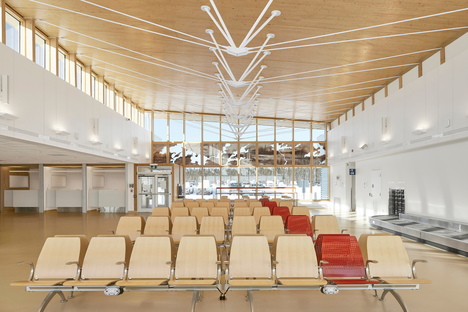 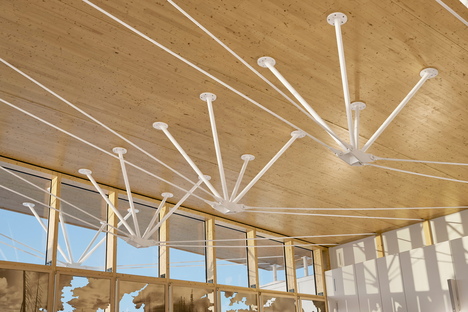 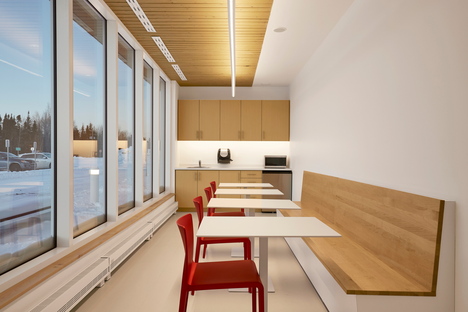