Prague-based firm, CMC ARCHITECTS have completed a fascinating refurbishment and restyling project of the historic Czech Radio headquarters in Prague. The result is a café with a sleek, simple, and stylish interior that corresponds to the aesthetic of the original 1930 interiors. 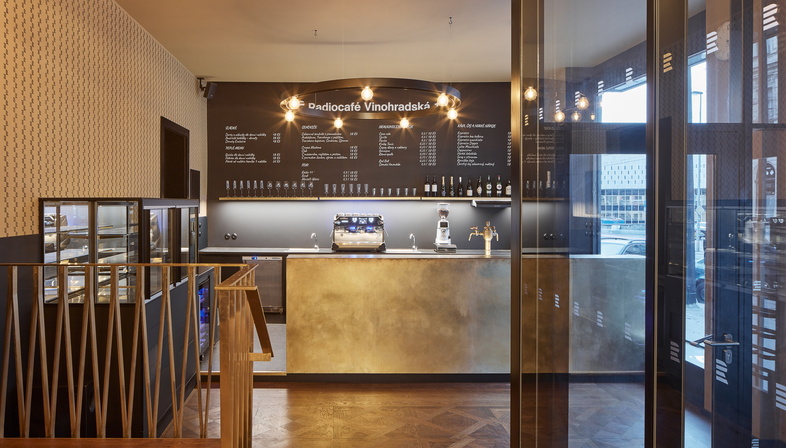 An intriguing brief for the creatives from the Czech firm, CMC ARCHITECTS: Czech Radio wanted to open its programming up to its audience and needed room for this mutual interaction. Basically, a place for friends to catch up, an informal café, and somewhere to host live broadcasts and social events.
And it’s all set in the historic Czech Radio headquarters on Vinohradská 12, Prague, a Functionalist building designed by the architect Bohumil Sláma and built between 1929 and 1932. The project’s principal investor was the Ministry of Post and Telegraphs, as the new premises were to include, in addition to Radiojournal (Czech Radio), the Post and Telegraph Directorate in Prague. Initially, several shops were planned for the ground floor. The building was bombed and partially destroyed during World War II. After this, the listed cultural monument has since been extensively reconstructed and expanded, some with successful results, others less so.
The task of CMC ARCHITECTS was to turn two of the building’s original units into a single environment - Radiocafé. The architects needed to take into account the historical and architectural value of the existing building while attempting to meet the client’s needs to incorporate modern elements and technologies into the space so that they could be broadcast live from the café without distorting the atmosphere of the premises.
The visual references to the 1930s building are the key to the interior design project by CMC ARCHITECTS. They leverage the site’s heritage and at the same time, use modern construction techniques and materials to create a café in harmony with the building’s original aesthetic: sleek, simple and stylish. The architects used a warm colour palette for the surfaces and materials, combining it with white glass, a nod to the lobby’s marble lining. Oak flooring, a brass bar, leather benches and marble tables are the visual anchors of the elegant space. The dialogue with the lobby is underscored by duplicating the rhythm of the columns from the entrance hall in the café space. This organizes the café into areas and separates the groups of tables, while circular light fixtures emanate a golden glow from the acoustic ceiling. The sizeable glazed partition with double doors to the entrance hall is a historical replica of the existing hall door. This meets the project’s acoustic and fire requirements without interfering with the listed facade that could not be changed.
Despite Radiocafé Vinohradská 12 being a place for live radio broadcasts, the architects were able to minimize the visual impact of the technology and retain the stylish atmosphere of the venue’s renowned past. A place where people can get together with friends and a place for the programme moderators and guests.
Christiane Bürklein 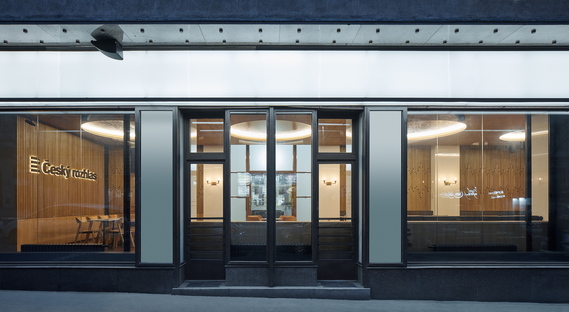 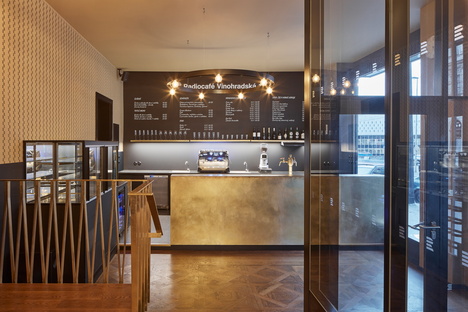 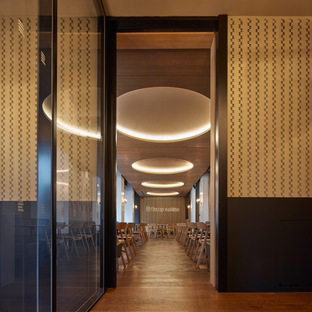 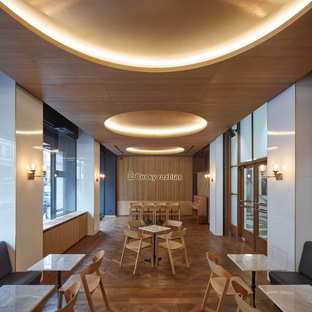 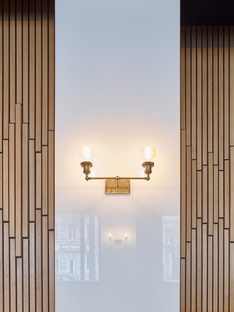 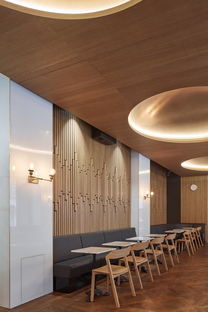 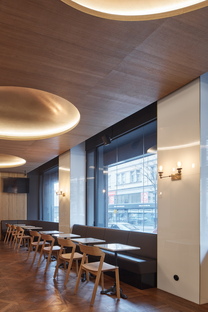 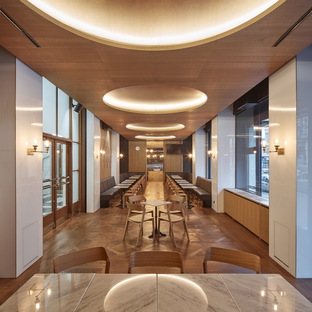 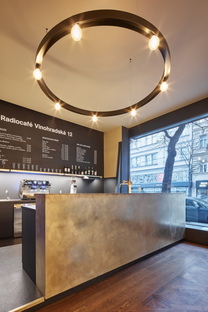 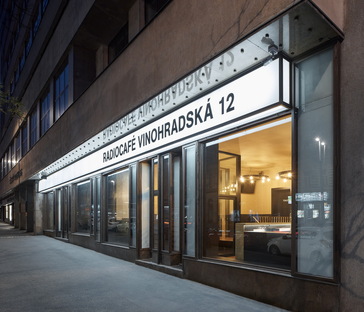 Loft with Love in Prague by CMCARCHITECTS