Getting closer to art has never been easier and more fascinating: thanks to the new depot of the Boijmans van Beuningen Museum in Rotterdam, the immense collection of the famous Dutch museum becomes accessible to everyone. The large mirrored "bowl" designed by the MVRDV studio in the Museumspark has already become a popular city attraction, the second landmark created by the studio in its native city. 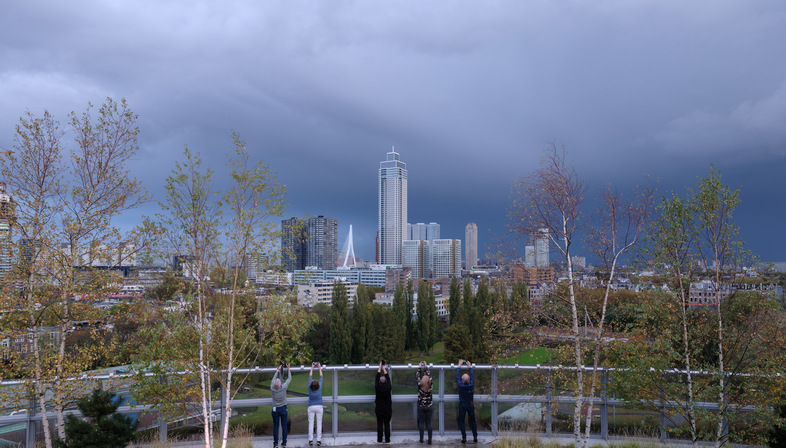 Conceived to provide a concrete solution to an urgent need, namely to store and preserve the more than 151,000 works of art of the Museum’s collection in one place, safe from being stolen but above all from the increasing risk of flooding of traditional museum cellars, the Depot Boijmans Van Beuningen is the first publicly accessible art depository in the world.
Normally, museums are able to exhibit only a small percentage of their works, while many treasures remain hidden, as does the extensive work which the conservation and protection of works of art entails. Hence the client’s desire to draw the curtain on the museum’s work, having a "container" created that would enable a democratic and unprecedented use of art. Indeed, stepping into the depot offers visitors a completely new experience: the artworks are arranged according to size and climatic needs, not according to art history periods. Old and contemporary works are juxtaposed, inviting users to make new and unprecedented connections.
It was the Dutch MVRDV studio that won the design competition for the construction of this unusual place, for which the architects had proposed an equally unusual shape. The design team, led by architect and urban planner Winy Maas, opted for a round, sturdy and functional building that does not turn its back on its neighbours – which in addition to the Boijmans Museum also include the Kunsthal by OMA (Office for Metropolitan Architecture) and the Het Nieuwe Instituut – instead establishing a new relationship with both the Museumpark and the city of Rotterdam. The ambition was therefore to create a building which, thanks to its mirrored façade, seems to disappear into the surrounding environment, while at the same time serving as a safe-house for the Museum’s collection, which is worth billions. Winy Maas, co-founder of the MVRDV studio, explains that – as surprising as it may sound – the inspiration came from an IKEA salad bowl. What at face value may appear as a mere quirk, instead has a rational basis, allowing to reduce the impact of the new building on the ground by taking up less space, to then curve upwards with a 10-metre protrusion to accommodate the entire programme – consisting of storage spaces, restoration studios, catering services and the films and presentations rooms – in an area of about 15,000 square metres.
The mirrored façade is followed by an equally spectacular interior, almost out of a movie. The atrium, with its criss-crossing stairways and windows that open onto the storage spaces brings to mind a panopticon, where the artworks can be seen from all sides. Thirteen large display cases welcome visitors as soon as they step into the building, with collages of pieces from the collection, the only element curated according to traditional exhibition criteria. To create the interiors, the MVRDV studio closely collaborated with several artists: John Körmeling designed the entrance and Marieke van Diemen the display cases. Outside, on the other hand, Pipilotti Rist designed a light installation that allows the depot to come to life at night.
The Depot is the studio's second landmark in Rotterdam after the Markthal completed of 2014. But the focus goes far beyond the architectural attraction, as the depot does not in any way lose sight of the environment, offering an experiment to add nature to the city. This takes shape in the form of the 35-metre-high rooftop forest, where a restaurant completes the Depot's offering. A proposal that was recognised with the award for the best Dutch roof even before the official opening of the structure on November 5. The 75 birch trees, 20 pines and various types of grasses and plants placed on the roof help retain water, promote biodiversity and reduce the city's heat island effect. The combination of a geothermal system, solar panels, LED lighting and high-performance insulation makes the building energy neutral. Moreover, rainwater is stored in the basement and used for irrigation and sanitation, reducing the building's water consumption.
MVRDV's Depot Boijmans Van Beuningen is an icon for the world of art. A building which, despite its impressive size, fits perfectly into the local context, becoming a mirror for the city and its inhabitants, an invitation to discover the artistic treasure that it presents with joy and primordial strength, within everyone's reach. 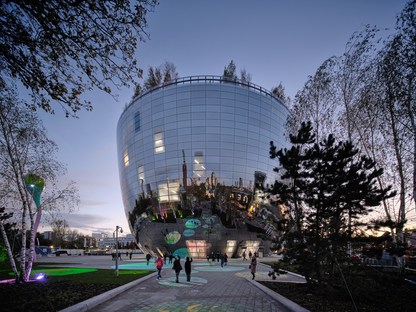 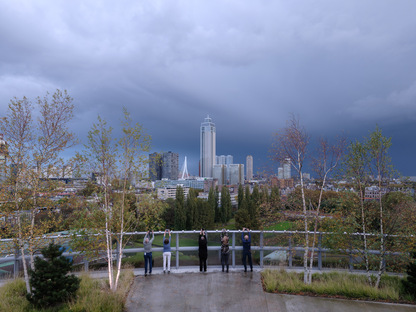 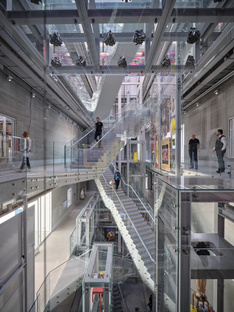 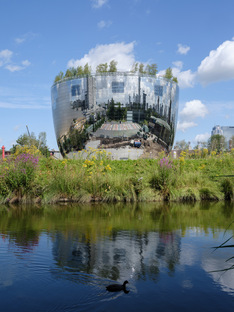 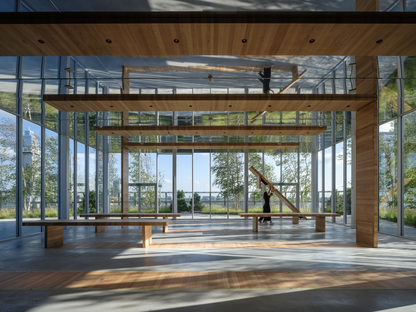 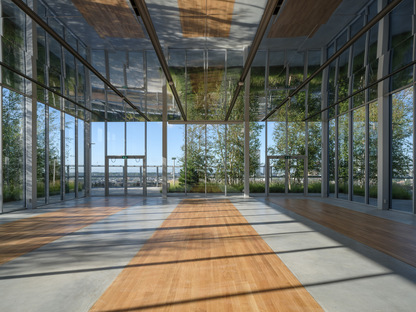 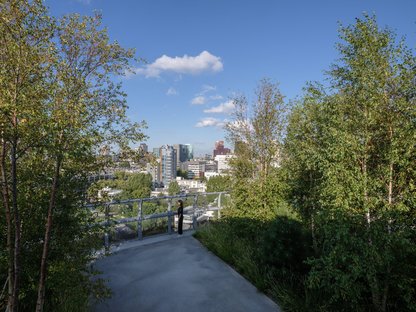 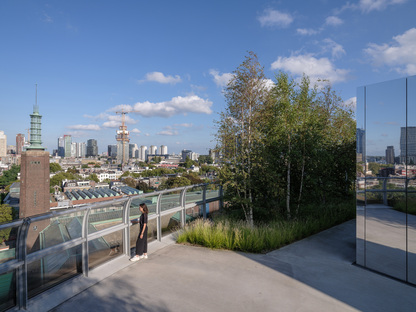 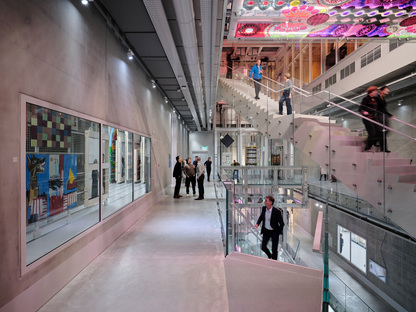 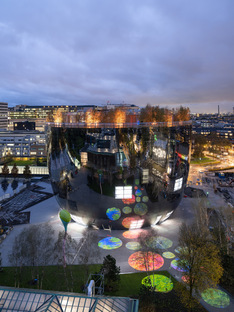 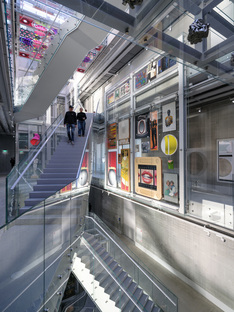 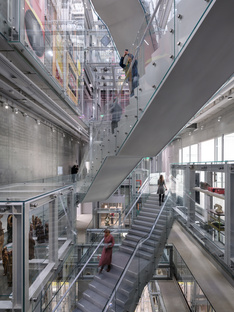 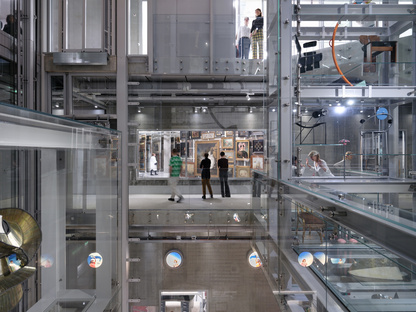 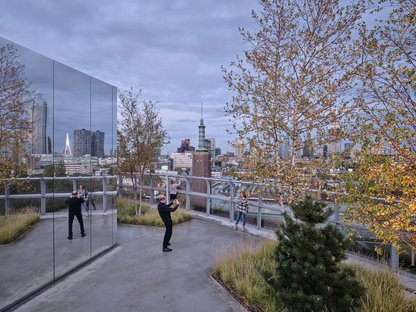