B2 Architecture’s Kabelovna Studios represents interior design style for recording studios and post-production areas. The architects have designed mind-blowing neon lights in the shape of sound waves that dominate the industrial space with their high-tech touch. 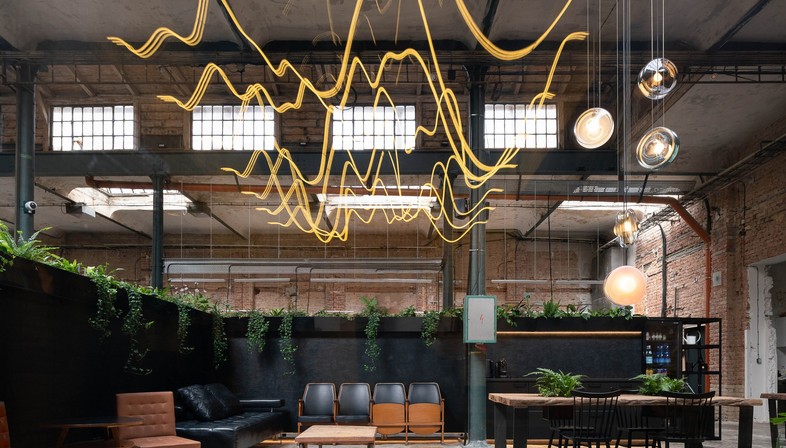 Barbara Bencova came up with a new interior design concept for a music recording studio in Holesovice, a former industrial district in the city of Prague. Kabelovna Studios challenge the idea of the sealed, anonymous container typical of cold high-tech offices, which are often insulated black blocks with no particular quality. In this project, the architects drew inspiration from the landscape in which the building is located, coming up with a new image for buildings serving this type of function.
The innovation is a product of the fresh international approach of B2 Architecture, founded in 2012 by Barbara Bencova, who took degrees in Venice and then Prague and studied under Renzo Piano, and was later joined by Zuzana Bartasova.
The space in question, a 250 square-metre area on a single ground-floor level, is located in a former electrical cable factory at 191/27 Dělnická Street. The Holesovice district in central Prague is now a mixed-use district in which big apartment buildings housing families alternate with gardens and offices, but it is still possible to find workshops dating back to the second half of the nineteenth century, when one of the first factory workers’ colonies was built here. In a century and a half the area has evolved around the historic industrial complexes, which now stand out for their size, often covering an entire block, for the rhythm and size of their windows, which are much larger, and for the rigid decoration of their façades.
So the area still has an industrial feel, deep down underneath. Barbara Bencova and Zuzana Bartasova recognised the narrative value of this architecture and decided to maintain its distinctive features, underlining them with a project that is partly about conservation but also grafts elements in a contemporary idiom onto the building. 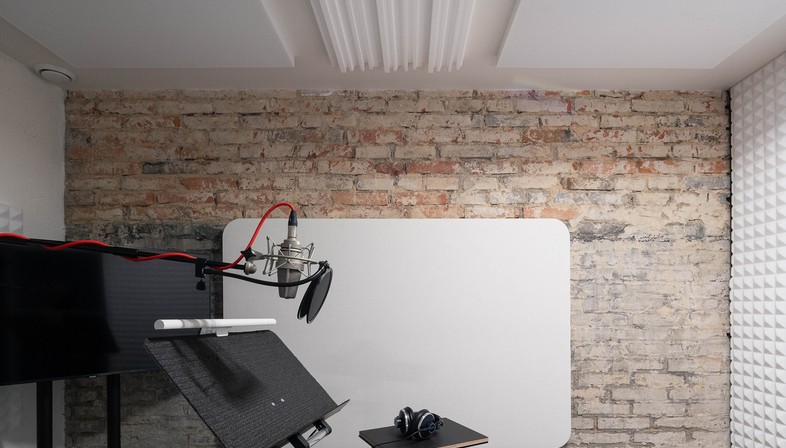 The brick walls were entirely reclaimed and consolidated, revealing all the different textures of the construction below the plaster, with all the flaws, different hues of clay and infill that have succeeded one another over the years. New features have been added to these, redesigning the entrances to the recording rooms, in which steel architraves for soundproofed glass doors have been preferred to the original arches. Black, traditionally the colour associated with recording studios, is used here to underline contemporary elements such as the door jambs and doors, the skirting boards, the utility systems and technical equipment on the ceiling and the newly built L-shaped wall embracing the reception area at the entrance to the studios. Black also identifies all the new metal furnishings, custom designed for the project by the architects.
The studios take up a portion of the ground floor, which also hosts other artistic activities: a stylist, a painter, and a silk-screening company, creating a lively creative environment. In the portion of the floor containing Kabelovna Studios, the factory’s high ceiling, about 5 metres, is emphasised in common areas such as the reception, lounge and mixing rooms, but sacrificed to permit acoustic requirements to be met in the recording rooms. The layout makes approaching the heart of the recording studios a gradual process, with a more public area followed by a buffer zone and then a private area which is protected and insulated for recording music.
A lamp hanging over a massive wooden table in the reception area further underlines the vertical dimension of the space. The original concrete floor has been reclaimed without eliminating the signs of time. A big untreated wooden table, a lounge furnished with 1970s upholstered armchairs in dark hues matching the brick, a row of cinema seats restored with recycled leather, and ornamental plants all around the brick walls create an authentic rustic atmosphere.
In addition to this versatile space, part waiting room, part meeting room, and part lounge for socialising, three glass doors open onto the three mixing rooms. A new beige anhydrite mineral floor establishes continuity in the space, allowing us to focus our attention on the walls and other existing structures and elements.
Here the architects add what may be the most expressive detail, establishing the identity of the entire project: neon lights in the shape of big, warm soundwaves travelling through the air along the ceilings, each with its own particular shape, standing out against the black acoustic panelling on the ceiling. In addition to the choreographic light of these elements, designed by Barbara Bencova and Zuzana Bartasova, in the daytime the true lighting comes in through three big original pyramid-shaped skylights, now restored.
A final row of glass doors leads into the recording rooms, covered with surprisingly white sound-absorbent panels that maintain the required performance while ensuring that the spaces have an airier feel than might be expected in a recording studio. 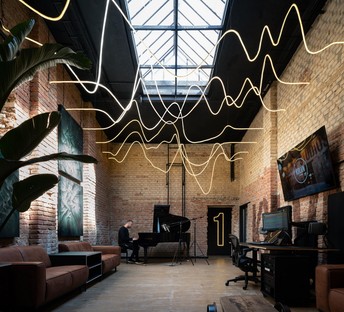 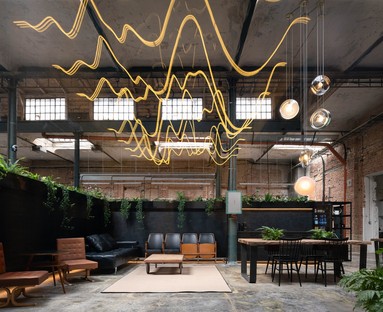 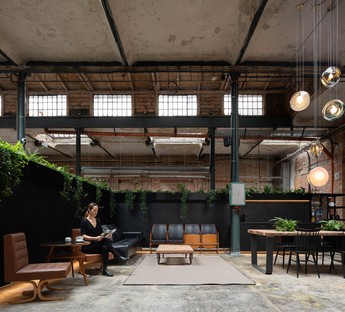 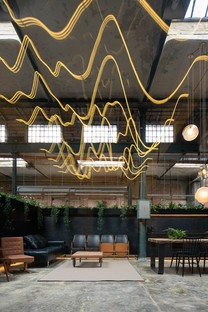 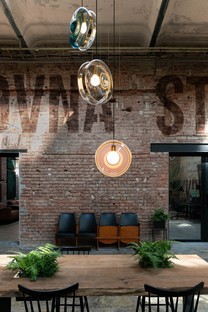 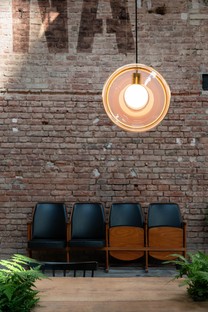 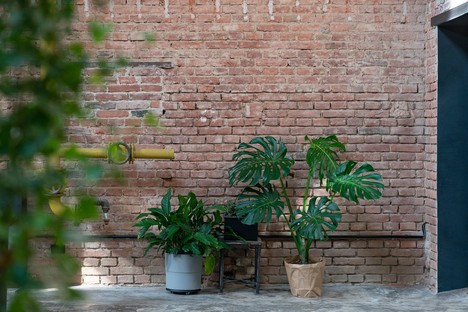 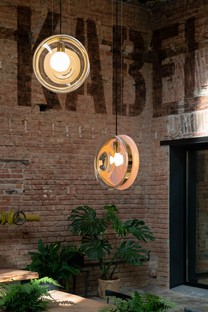 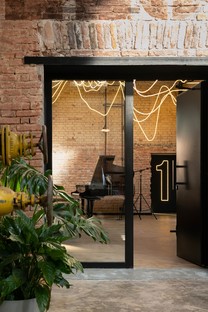 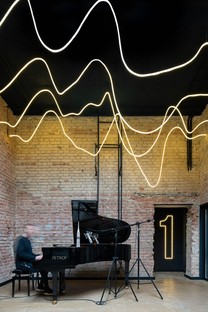 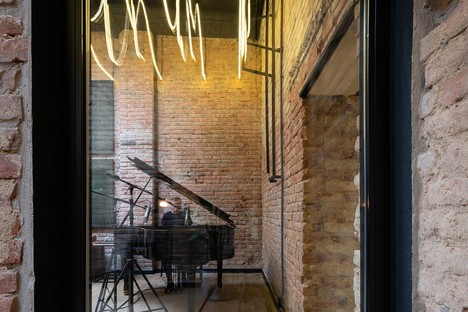 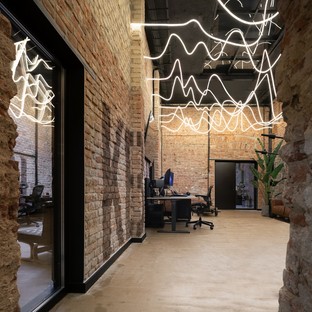 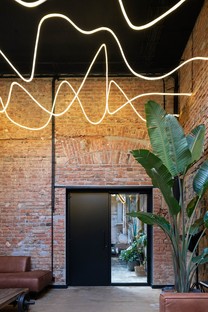 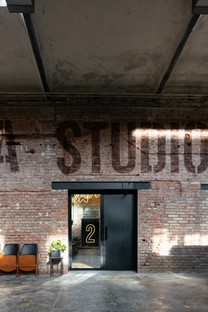 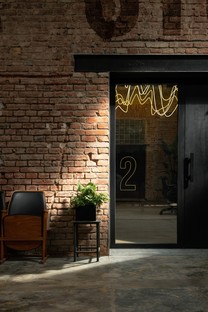 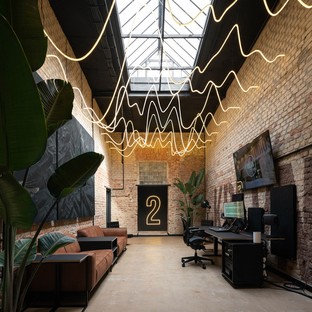 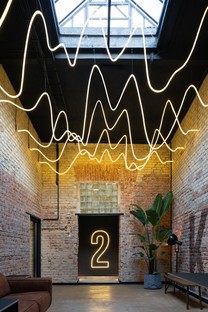 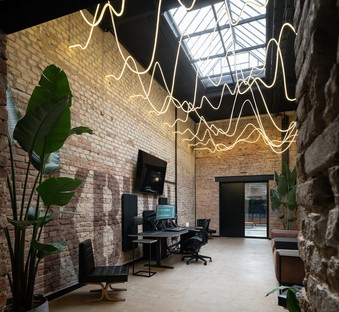 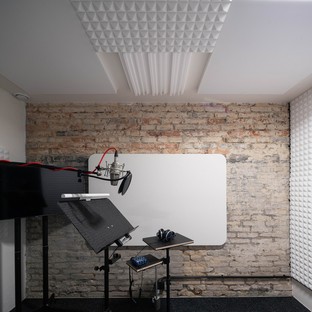 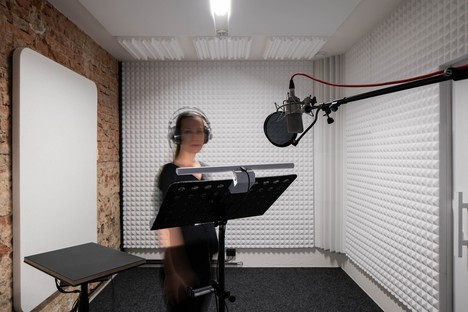 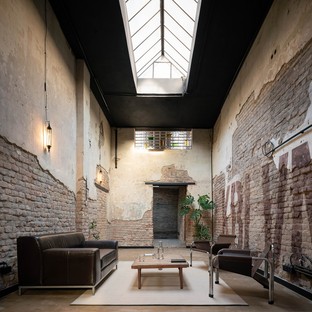 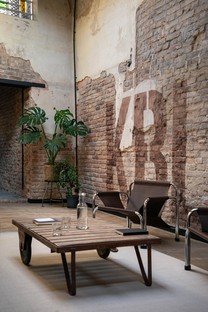 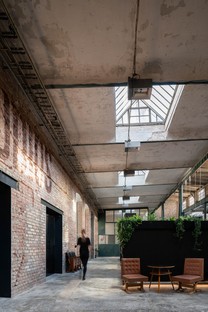 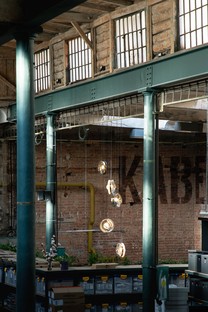 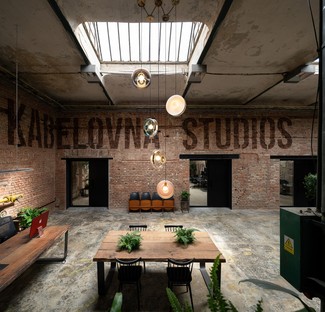 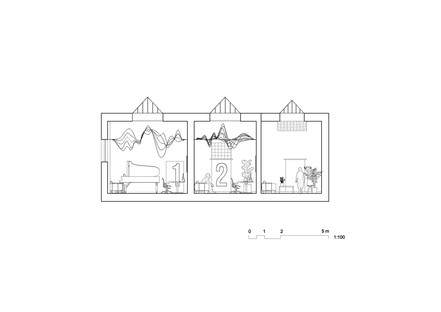 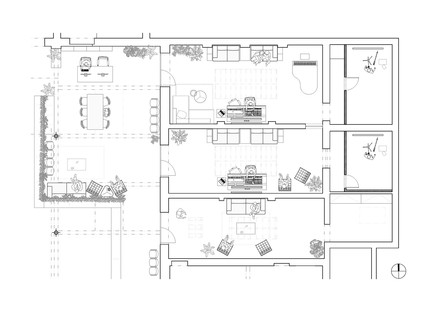