The Asti Architetti studio has designed the redevelopment of an important urban block in the city of Milan. The project, “il Cortile della Seta” involved a typical courtyard building located between Via Moscova and Via Solferino. The architects redesigned the street front of the four above-ground levels, the covered courtyard and the new glass roof. 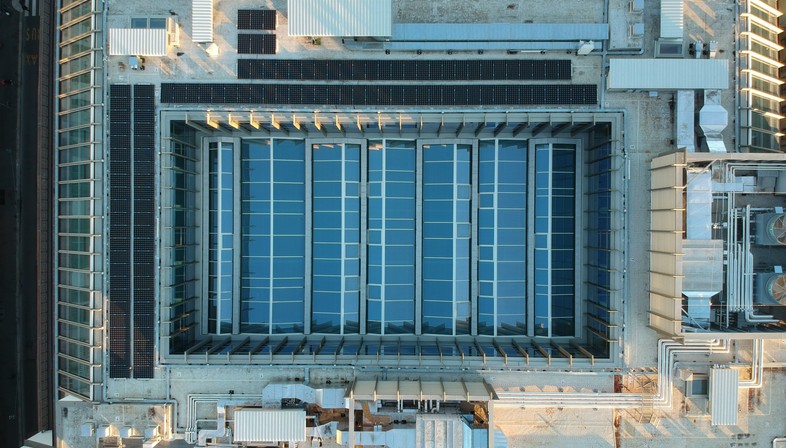 On the corner of Via della Moscova and Via Solferino in Milan, Asti Architetti has designed the redevelopment of an important urban block. This large, typical courtyard building with its long history and many transformations is now set to house offices and retail activities for major brands.
In the area that had previously been a barracks of the Napoleonic Cavalry, then a military bakery of the Austrian government, the Società delle Sete (Silk Company) built the “ Cortile della Seta” (Silk Courtyard) in the mid 19th century. It was a large building with a large covered central area, initially used as a warehouse and as a room for maturation of cocoons, and later as a meeting place for the commercial negotiations of the "bigattèe", craftsmen and silk merchants. Following the crisis in the sector, starting in the 1950s, the Bank shifted its area of interest and became “Banca Popolare Commercio e Industria”. In 1954, having been extended and restored, the building was inaugurated once again, and since then it has retained its role as a representative seat, with its linear and unadorned façade, but its grandeur has always played an important role in the city. This role, as architect Paolo Asti emphasises, has not been diminished: “The restoration project has not distorted the perception of the city and its surrounding buildings; on the contrary, it has aimed to increase the relationship with the surrounding urban context”.

For this typical Milanese courtyard building, with four levels above ground and one basement, a number of the façade features have been left unaltered to preserve continuity and the relationship with the surrounding urban fabric. At the same time, all the necessary measures and modernisations to increase energy performance have not been overlooked. The new " Cortile della Seta" meets the requirements of NZEB (Nearly Zero Energy Building) and has been awarded LEED Gold certification. The architect sought and created a dialogue between newly conceived design solutions and elements inherited from the building's past. On the façade, for example, the size of the existing windows has been increased and new shop windows have been created in line with the openings on the upper floors, whose shape recalls that of the entrance at the corner of Via della Moscova and Via Solferino introduced in 1954. The replacement of the window and door frames and the use of hidden frames helped to create a modern image for the building, and enhanced its visual interaction with the city. The central courtyard, an important and characteristic element, has taken on a new and significant role: it has become a covered and multifunctional square. The new glazed roof, designed by Asti, is made up of sheds of different sizes, a solution which provides considerable daylight to the area below and is designed to evoke the building's industrial past.
The top two floors have been designed as a luminous “lantern”, with continuous glazed cladding, providing a vantage point from which to observe the city, and whose façade solution allows them to be clearly distinguished from the historic building below. 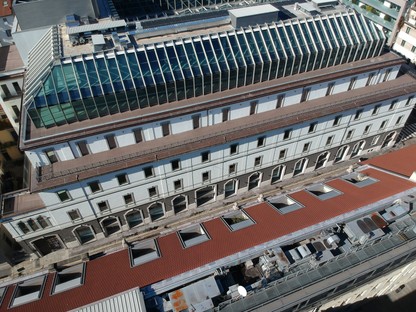 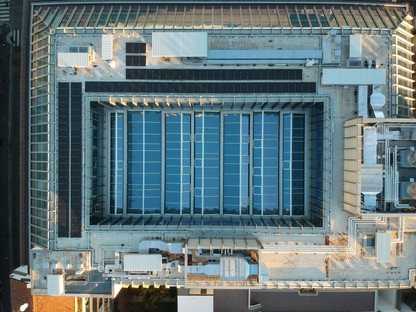 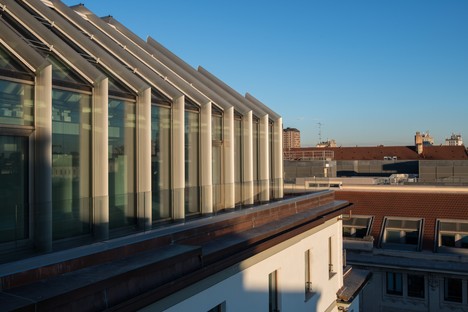 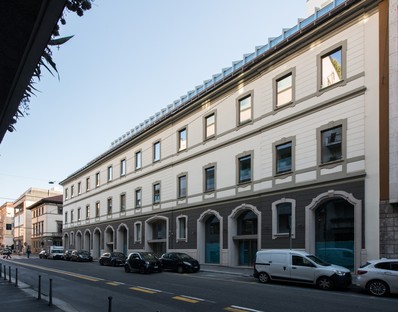 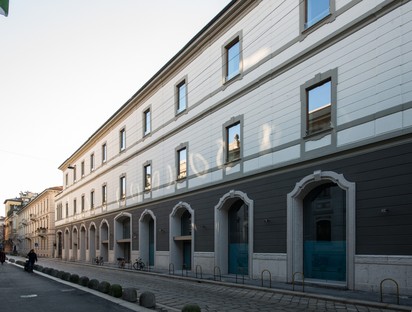 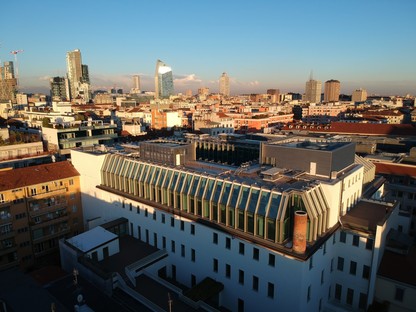 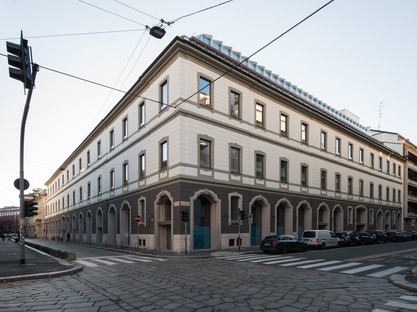 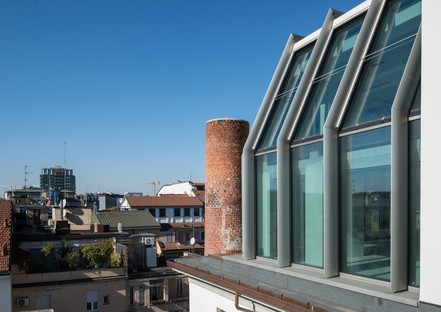 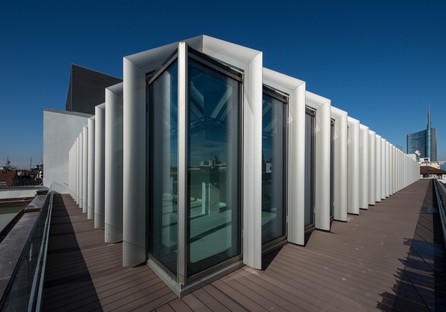 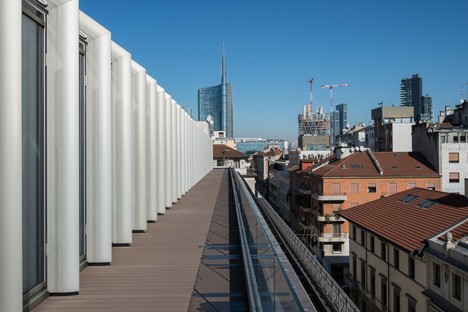 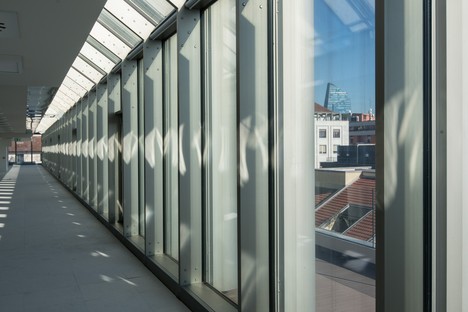 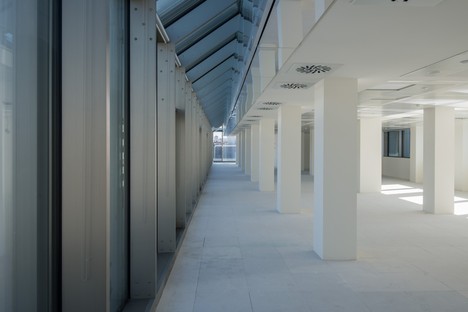 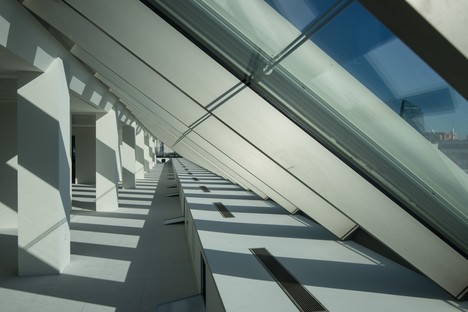 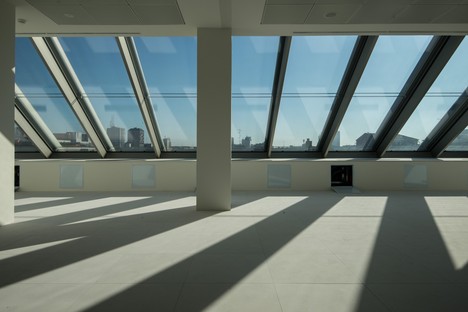 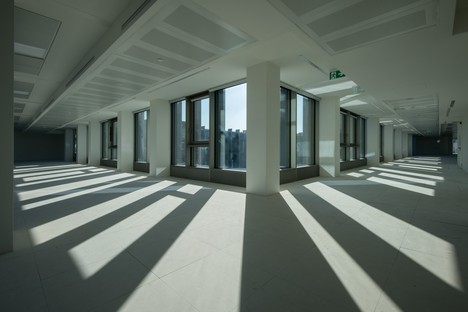 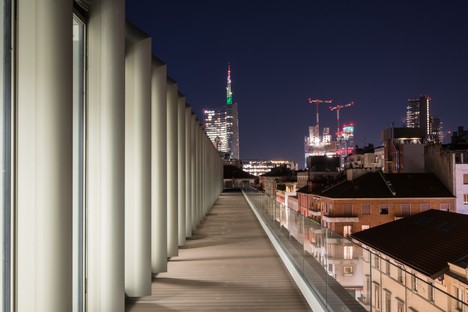 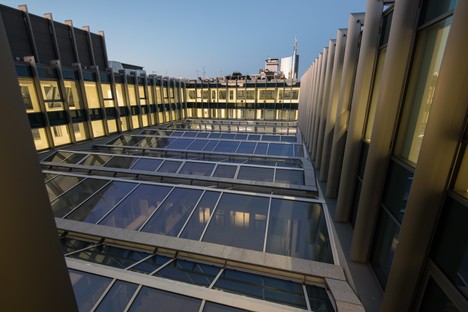 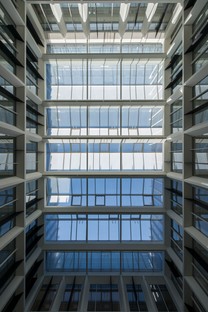 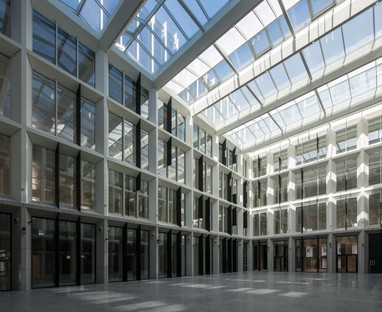 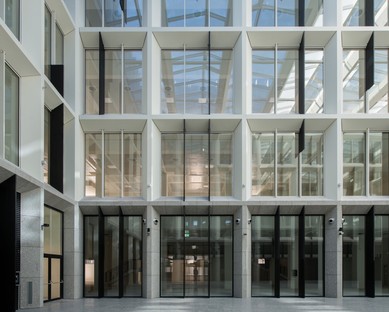