The new station and multimodal pole in Rennes looks like a big cloud of light seeming to rest on the built landscape, providing a gateway to the French region of Brittany. The project by architectural studio AREP, developed with the structural designers of MAP3 and with SNCF Gares & Connexions, serves as a meeting-point for different urban and extra-urban transportation lines with pedestrian and bicycle paths, connecting the north and south of the city of Rennes. 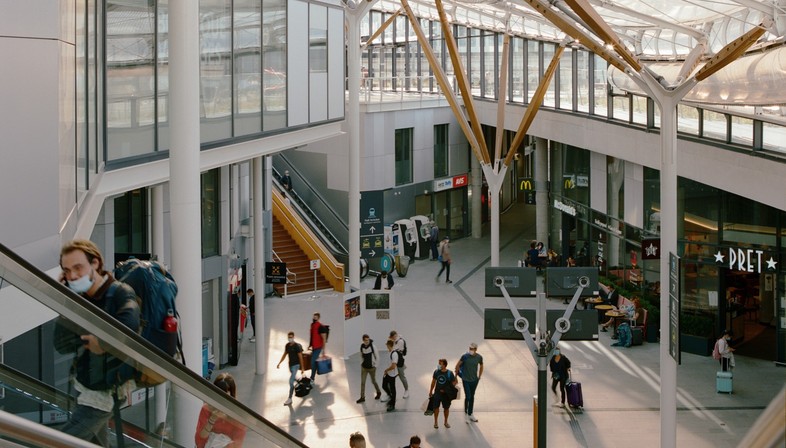 The city of Rennes in France has a new railway station and multimodal pole designed by AREP with the structural designers of MAP3 and SNCF Gares & Connexions. The project aims to prepare for the opening of the new Bretagne-Pays de la Loire high speed line and the city’s new metro line B, and will be a meeting-point for various different urban and extra-urban transportation lines with pedestrian and bicycle paths, joining the north and south of the city of Rennes.
The city’s first railway station was built in the late 19th-century in the southern part of the city centre. It has been modified repeatedly over the years, particularly in the 1980’s and 90s’, when it was transformed into a bridge station, insufficient for the requirements of the city’s public transportation system. The old station stood above the railway line, with an office building to the north of the station square directly connected to the city centre and a second building, complete with parking lot, to the south, 10 metres above the level of the tracks. AREP’s new station fits into the broader picture of the neighbourhood, in a vast transformation operation affecting the entire neighbourhood on either side of the railway tracks, owned by French national railway operator SNCF as well as private owners, as part of a ZAC (zone d'aménagement concerté).
In this context, the station becomes an essential element symbolising the gateway to Brittany. The architects drew their inspiration from the region’s landscape, with its misty moorland hills, to build a covered space with a façade that is not monumental, topped by an ethereal transparent roof. Construction of a landscape rather than a single building was essential to connect the areas to the north and south of the railway line; the project achieves this with an artificial hill rising gently from the historic station square to the north of the station up to the level of the railway line, 7 metres above. The hill is a pedestrian zone and landscaped element created with a complex reinforced concrete structure that becomes a part of the roof of the station hall. The built landscape thus becomes a key element in the fabric of the city, providing access from the hill to the central exchange concourse, sheltered by the big roof. This big hall running the full height of the station building is flooded with light and dotted with a forest of wooden and concrete pillars; an empty space that fits between the built landscape outside and the existing station, preserved underneath the ETFE roof. This concourse plays a key role in the building, not only as a node for travellers but by allowing daylight to filter into all the levels of the station and providing good ventilation, ensuring a balanced transitional space between the underground metro lines, the railway station and the city. 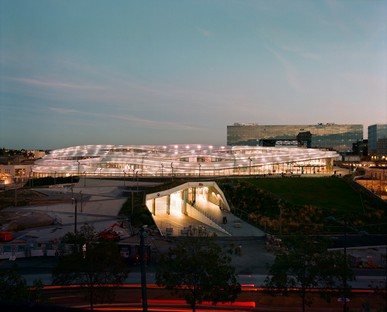 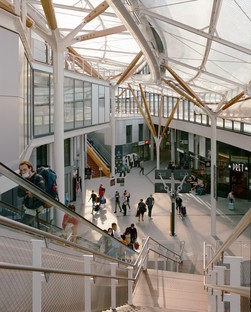 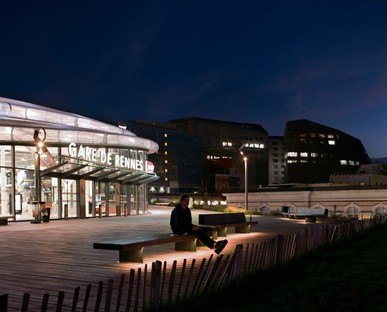 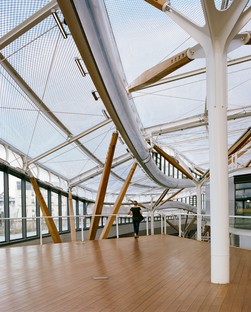 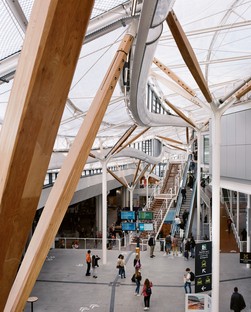 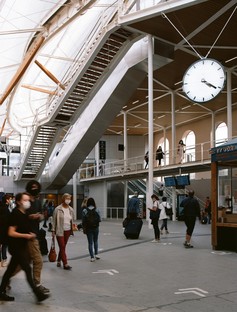 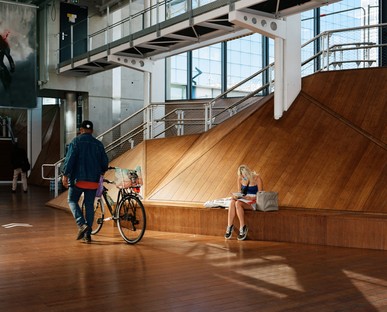 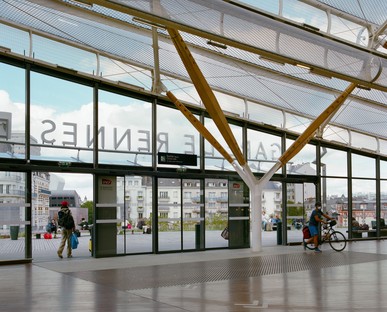 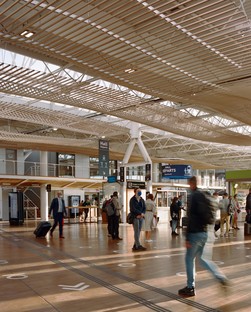