The Casa-Port station designed by architectural firms AREP and Groupe3 Architectes in Casablanca is part of the general modernization of the infrastructure network of Morocco spearheaded by King Mohammed VI. The strong points of the initiative include the "winged horse" Al-Boraq high-speed line that will connect Casablanca and Tangeri, and the large Tangeri-Med port hub, projects that contribute to increasing the African country’s role as a bridge to Europe. 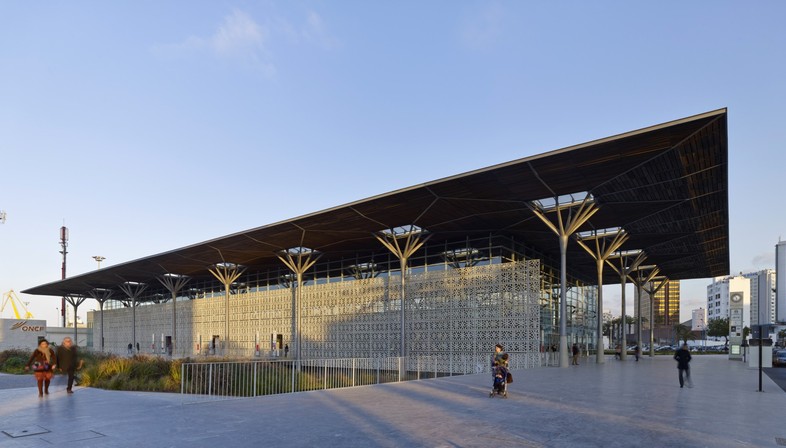 The development of the infrastructure network with the high-speed railway station of the Casablanca - Tangeri line and the large Tangeri-Med port hub are flagship initiatives of the modernization project of Morocco spearheaded by King Mohammed VI, who celebrated his 20th year of reign on 30th July 2019. The projects under construction and under development contribute to increasing the role of the African country as a bridge to Europe.
Al-Boraq, a mythical winged horse, is the name given to the Moroccan high-speed railway line that connects Casablanca and Tangeri in just over two hours, cutting the previous travel time by more than half. The important development of the railway system was also functional to a general renovation of the stations of the four main cities: Rabat, Casablanca, Kenitra and Tangeri. In Casablanca, the modernization of the regional railway system, connected to the high-speed line by a system of shuttles, regarded stations such as Casa-Port, a project by architectural firms AREP and Groupe3 Architectes that created a dynamic transportation hub for the city that anticipates its future needs. 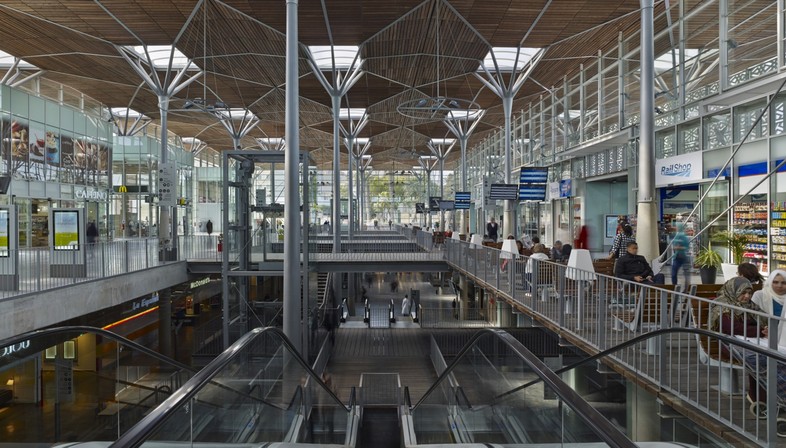 At Casa-Port an important urban hub of the city has been created. As the name suggests, the station faces the port in the meeting point between the medina, the art deco district, and the city centre. The design of the station and the adjacent public spaces is part of a more general programme of remodelling for the waterfront and the districts in the vicinity of the port of Casablanca.
Under a large, unifying roof supported by slender columns, all the functions of a modern station are distributed. These include a large waiting room for passengers, a shopping centre, a two-tier underground car park, along with the waiting and railway circulation spaces, and the offices in an adjacent building that completes the project.
The concourse is the main element of the station, a large hypostyle hall that opens onto the nearby square to the southwest. Its dimensions and those of the walkways leading to the railway platforms are designed to deal with the heavy traffic of commuters that fill the station during peak hours. The concourse houses all the travel-related services (ticket offices, information displays, reception, waiting areas, etc.) as well as a prayer room situated away from the intense foot traffic. Vertical circulations pass through the large central floor opening and link the concourse with the retail area below and with the underground car park.

The wood and steel roof juts out beyond the façade with ample projections towards the square, providing shady areas outside as well. The slender load-bearing columns that support the roof are split in the upper part into four branches, like a stylized capital of which only the lines of force remain. In correspondence with the stem of each column, the roof therefore does not have structural functions and is replaced by a skylight that allows sunlight to penetrate into the station. The floor-to-ceiling glass façades guarantee continuity between the public space inside the station and outside in the square. Also contributing to the image of lightness and innovation, though always tied to tradition, is the west façade which, like a large mashrabiya, filters the strong afternoon sunlight and pays tribute to the modernity of Casablanca. 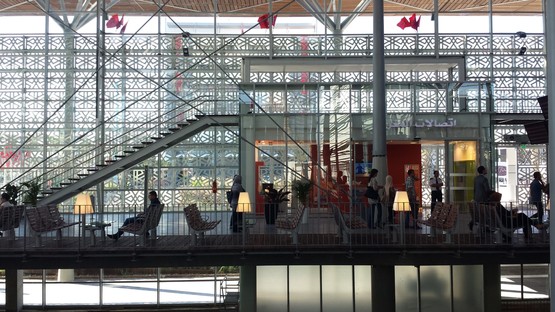 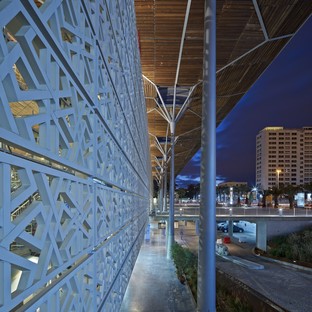 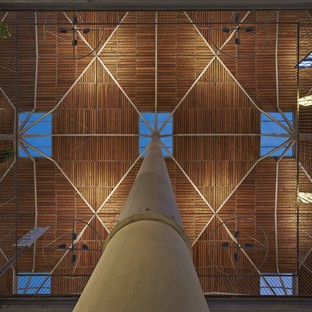