Andrea Maffei Architects has created the interior design project of the DAV restaurant located in the Citylife complex in Milan, on the first floor of the Allianz Tower designed by Arata Isozaki and Andrea Maffei himself. 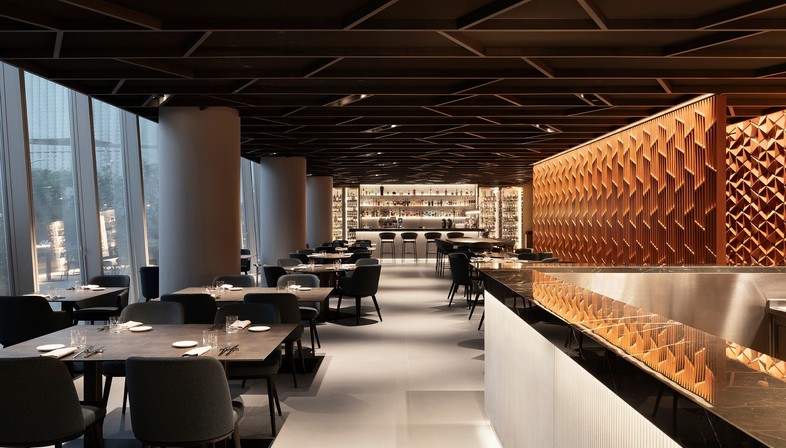 The Citylife complex in Milan has transformed the area of the old fairgrounds into a new part of the city featuring skyscrapers, residences and a large public park.
Here, we find the three towers designed by architects Zaha Hadid (Generali Tower), Daniel Libeskind (Libeskind Tower), and Arata Isozaki and Andrea Maffei (Allianz Tower).
It is precisely in the Allianz Tower that the Andrea Maffei Architects studio recently returned to create the interior design project for the DAV restaurant, a brand of excellence on the Italian scene, the three Michelin star Da Vittorio restaurant in Brusaporto, which with DAV aims to attract a younger and more metropolitan audience.

The restaurant is located on the first floor of the skyscraper, a space originally intended for offices with an outdoor terrace. The architects had at their disposal a long central rectangular space glazed over the terrace, enclosed by the two tower stairwells. For these spaces architect Andrea Maffei and his team have created a project that evokes the atmosphere of large international metropolises. The two extremes, the north and south sides, are dedicated respectively to the restaurant's kitchen and the guest reception. In the central section, starting from the reception cocktail bar area, the restaurant develops along the long glass façade and then continues onto the outdoor terrace.
The guiding idea that defines the project is that of a fluid space that shapes itself and welcomes guests, leading them to their table. This concept is translated into architectural elements through the long wood panelling composed of pyramids that rotate in various ways recreating the idea of fractal calculations. This panelling is the fil rouge that connects the different environments of the restaurant, highlighted and emphasised in its geometric games by the carefully studied oblique lighting and the use of a neutral colour palette for floors, walls and finishes, which contrasts with the warm cherry colour of the panelling. 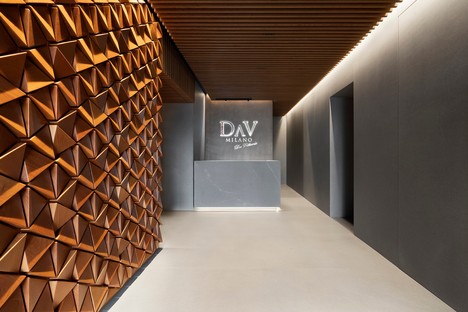 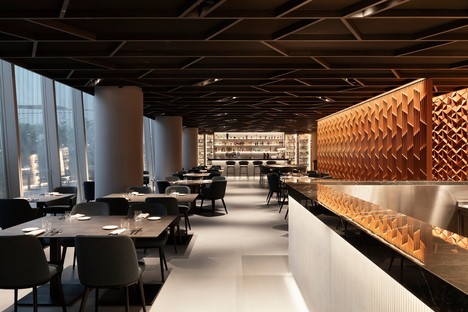 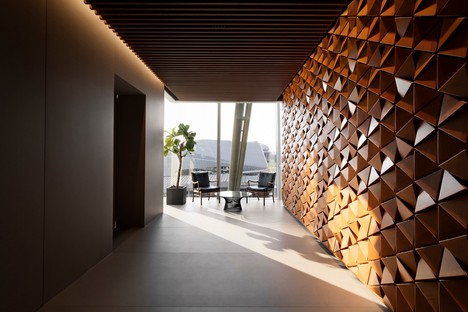 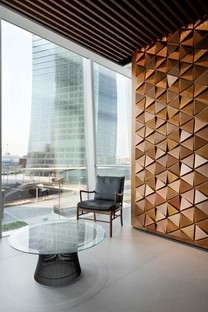 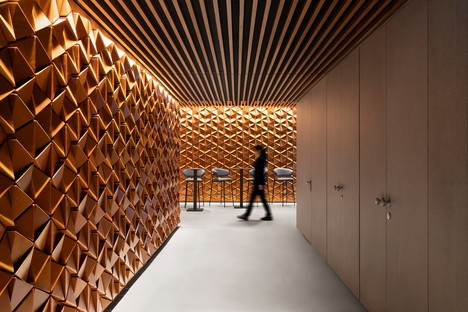 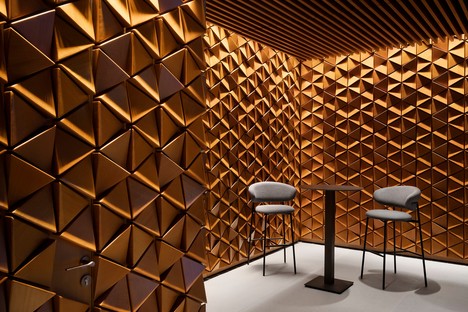 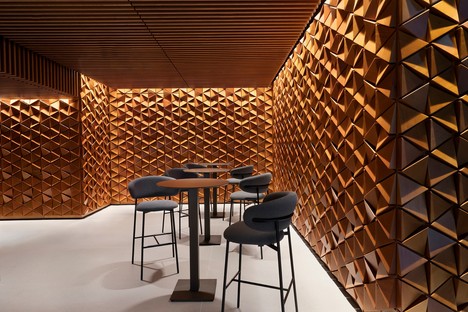 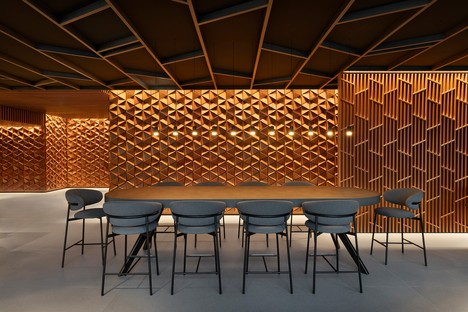 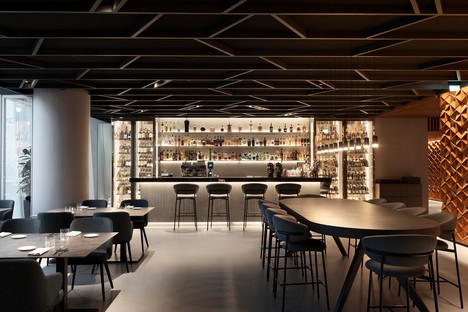 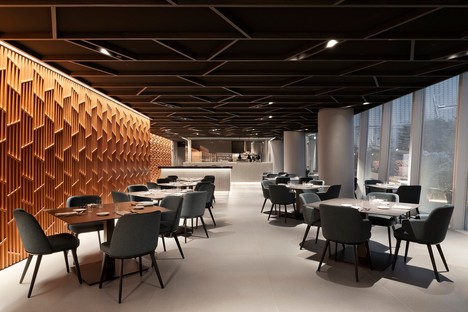 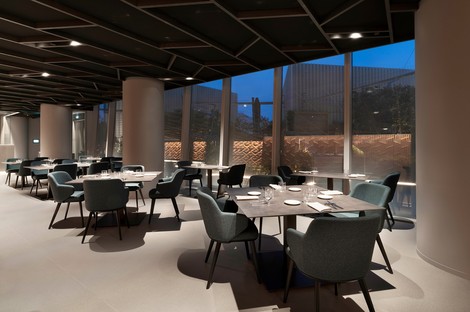 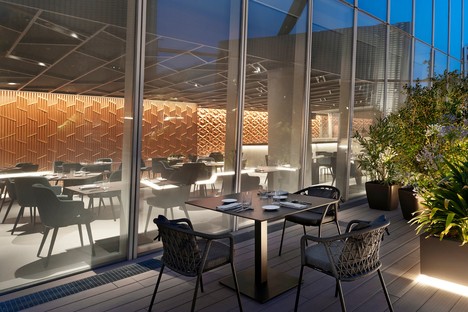 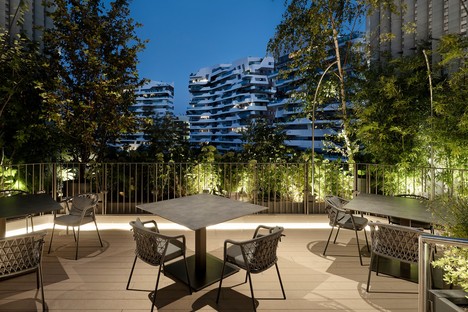 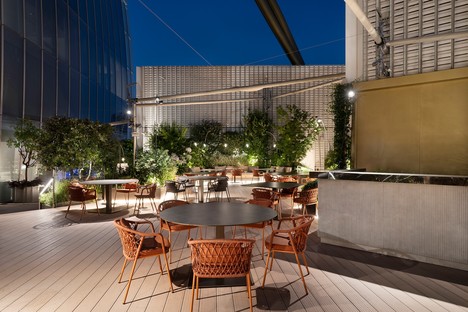 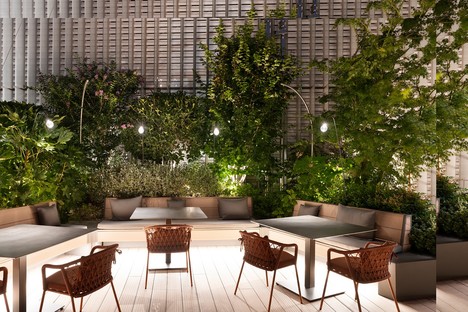 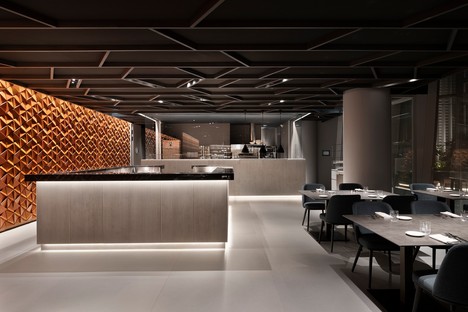 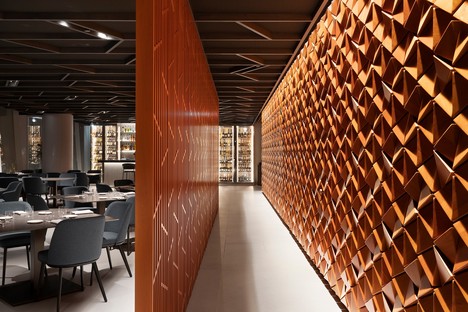 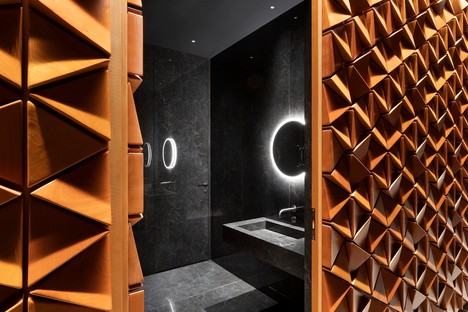 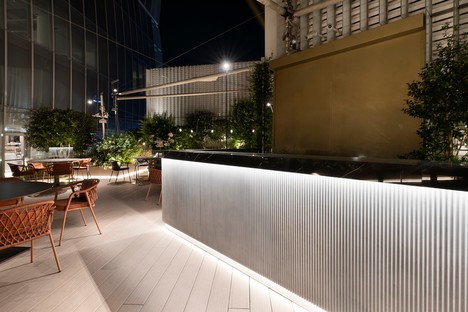