The vault as symbol of a spiritual path is the focus of Casa Volta, a holiday home designed by Jorge Ambrosi and Gabriela Etchegaray in Puerto Escondido on the Mexican coast. 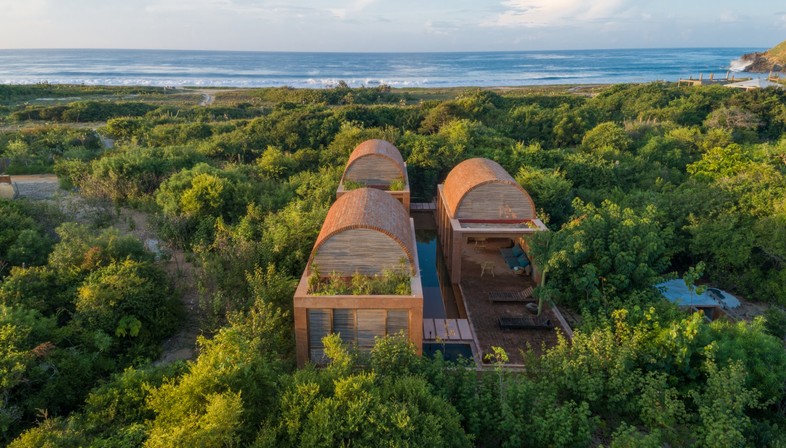 It’s definitely unusual to find a building with a vaulted roof on the Mexican coast of Oaxaca, and the beach town of Puerto Escondido is no exception. Here, amidst the dense vegetation, stands Casa Volta, designed by Jorge Ambrosi and Gabriela Etchegaray, with three vaulted roofs like observation towers overlooking the immensity of the ocean before them.
Puerto Escondido, considered a paradise by Italians since the publication of Pino Cacucci’s book and the 1992 film by Gabriele Salvatores of the same name, is a town of low houses with flat roofs with a strong vocation for tourism and commerce. Ambrosi and Etchegaray’s iconographic reference in the project is more likely to be the colonial architecture of Oaxaca de Juárez, the state capital, the historic centre of which has been declared a UNESCO World Heritage Site.

Three brick vaults floating above the dense vegetation along the coast form the roofs for three spaces for living and contemplation, designed as the client’s holiday home. The choice of the vaulted roof is by no means random, referring to a spiritual path through the building (in which the vault built by human hands is a symbol of the celestial spheres), where human beings are seen in relation to creation. The vault encourages us to raise our eyes and gives concrete form to perspective, to the search for infinity. The circumscription of this momentum into a circular form conveys the sense of a completed, revelatory path.
Ambriosi and Etchegaray’s project has three barrel vaults, each supported by 12 columns. Three indoor spaces alternate with three outdoor areas of practically the same shape to form a rectangular layout. The longitudinal axis of symmetry is a channel of water symbolically tying the house to the ocean, which cannot be seen even though it is only a short distance from the house. On the whole, the project displays a strict sense of order like that associated with the projects of Louis Kahn. Two bridges at either end of the construction allow people to walk all the way around it, passing through interior and exterior spaces, through nature and buildings, walls and sky, in a perpetual alternation of experiences that adds value to everyday living. The home’s simple yet complete programme for living includes two bedrooms with bathrooms in two of the vaulted spaces, with a kitchen and living room in the third. Adjacent to each of them is a terrace, mediating between the home and its wild natural surroundings. No space is designed to be completely closed-in and circumscribed, and, except for three of the outer walls, all the walls are constructed using a system of sliding wooden shutters so that all the indoor spaces can be opened up to the outdoors.
Everything in the project is highly symbolic, even the house itself, an image of idealised everyday life, with spaces specifically designed for sleeping, preparing food, and relating to the home’s natural surroundings, though without protecting against them, making it an idyllic project.
In the end, as Ambriosi and Etchegaray would say themselves, Casa Volta appears to be a turning point, leaving behind the concrete, pragmatic construction typical of recent Mexican architecture to enter the world of research and reflection on the discipline. Not long ago, in fact, the two architects, companions in life and work, complained in an interview of Mexican architects’ recurrent habit of starting to design buildings while very young, just out of university, and reflecting on the discipline or developing their own style only after beginning to build, if at all.
Ambriosi and Etchegaray’s participation in the last Biennale in Venice as curators of the Mexican pavilion definitely represented a step in this direction, presenting projects implemented with special attention to and reflection on the rural context, from the desert to the tropical forests and lakes, for which the projects were designed and built.
The local climate and materials also determined the choices made in Casa Volta. The vaults, along with the bamboo grids that shut in their sides, allow the breeze to blow into the house, while water refreshes its exterior, keeping it cool even in the hottest temperatures. The structure is made out of brick, with clay and cement flooring, in homage to Casa Wabi, the well-known art foundation with residences and exhibition spaces opened by Mexican artist Bosco Sodi and designed by Tadao Ando in 2014, for which Ambriosi and Etchegaray designed a pavilion in 2018. 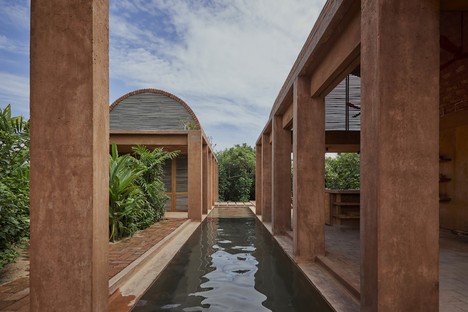 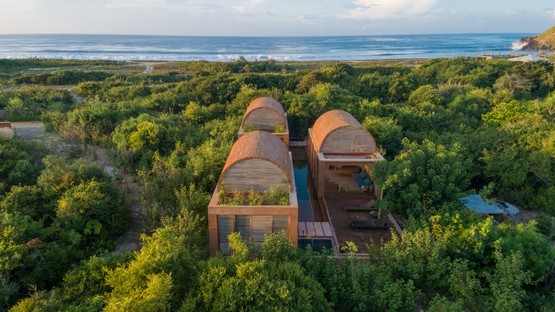 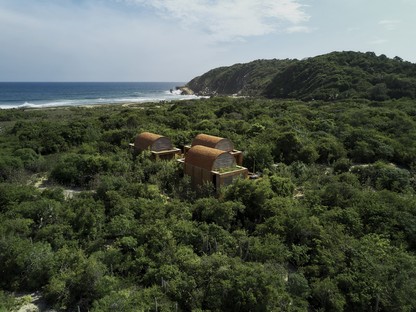 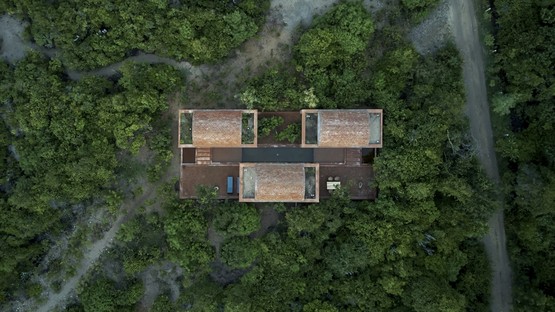 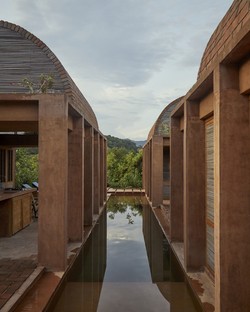 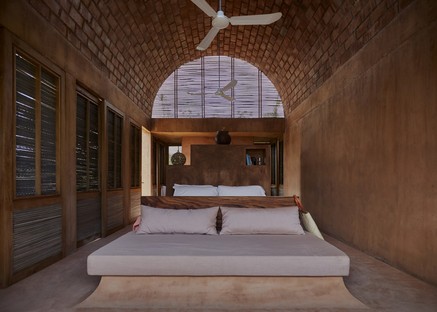 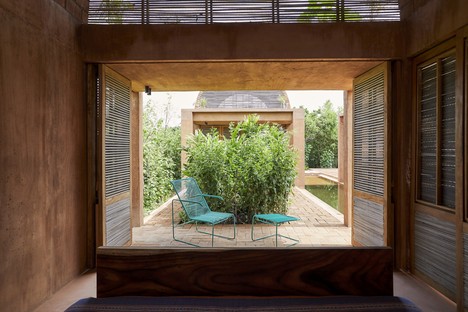 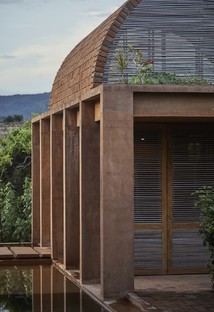 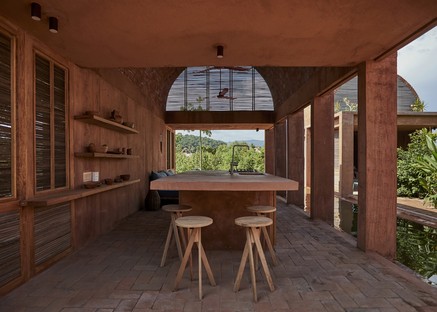 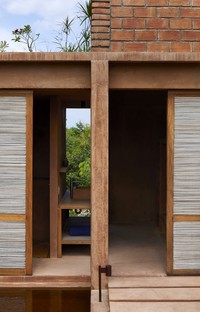 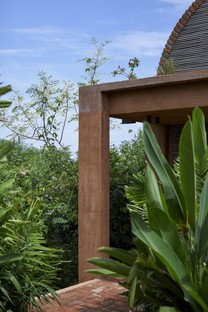 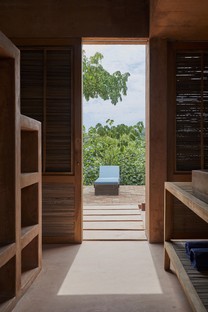 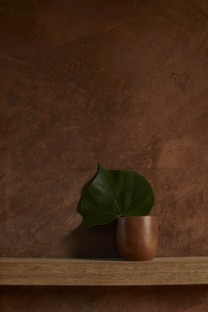 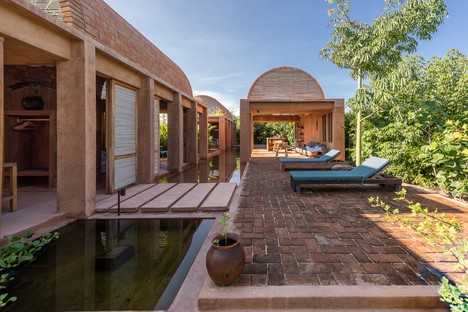 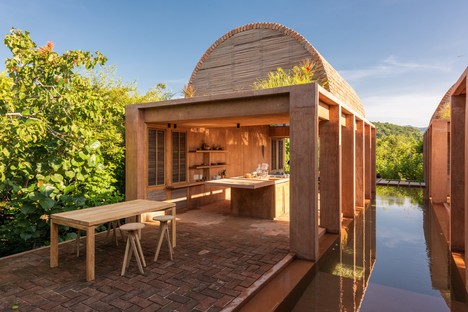 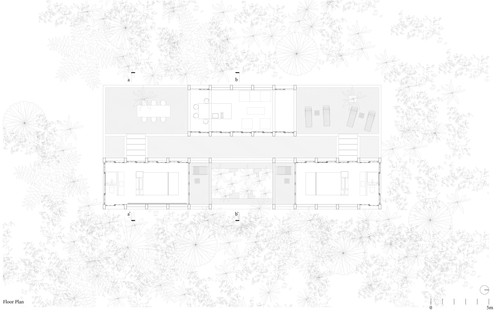 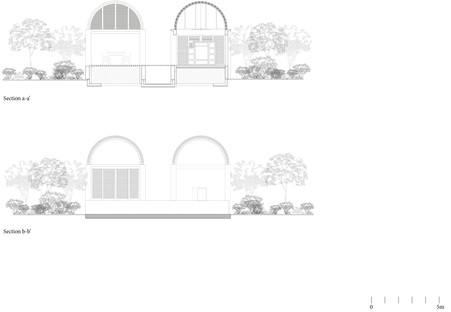