31/44 Architects mend tears in the urban fabric and increase the density of cities with incremental actions on small, underused and neglected plots of land. After the Red House in East Dulwich, London, the studio has built Corner House in Peckham, recovering and expanding another end-of-terrace property. 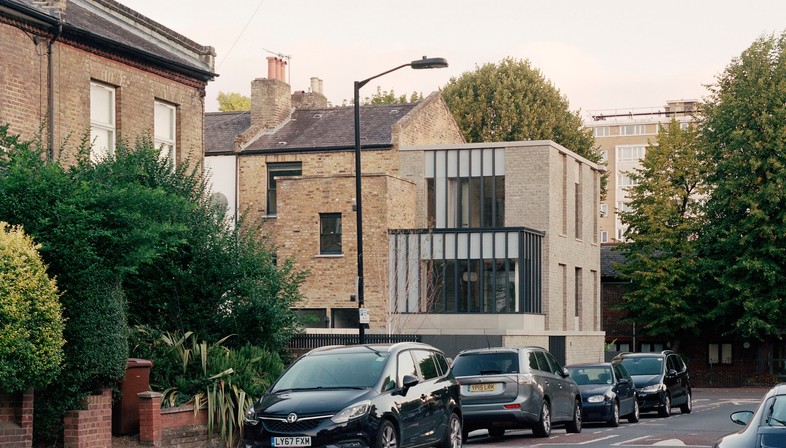 After completing the Red House in London’s East Dulwich district, presented here a few months ago, 31/44 Architects received a proposal of similar intent and starting conditions, the Corner House in Peckham, South London.
Working with a different real estate investor, Sara Mungeam, who took care of the project’s interior design herself, the project has the same basic aim as the Red House: making the most of an underused, wasted boundary plot at the head of a row of suburban terraced houses.
Will Burges, director of 31/44 Architects, has a specific interest in “mending” urban places where “fractures” have arisen over time, leading to unresolved situations of the kind commonly seen in our cities: undefined, neglected corners or street junctions. This is the case of the project in Peckham, where a fenced-in garden plot invisible from the outside on the corner of Talfourd Place and Denman Road offered no particular value for either the residents or passers-by.
Sara Mungeam wanted not only to renovate a Victorian terraced house, but to expand the building by constructing a new house at the head of the row. A single residential unit has been replaced by three homes: a new house on three levels, a two-bedroom ground-floor apartment in the Victorian terraced house, and a two-bedroom maisonette on the upper floors.
How could all this be done without upsetting the historic and aesthetic heritage and identity of the neighbourhood? As in the Red House project, the architects make the most of the building by transforming it into a node, not only in terms of its position, but as a recognisable landmark.
As in the Red House, in the Corner House 31/44 Architects prolonged the line of the cornice and the stringcourses of the original home in the expansion. The architects imitated the type and colour of brick that originally distinguished the row of terraced houses, ignoring disrespectful changes that had been introduced over the years. Lastly, where it was not possible to reproduce the original lines, they added a false pattern of lines to establish a new geometric harmony with a minimalist orientation. Thus the slightly arched windows were replaced with perfectly rectangular ones; the decorative white window-frames were entirely removed and replaced with slight recesses in the walls. The new brick façade turns the corner with a rounded edge in imitation of the pub on the opposite side of the street, made of grey rather than red brick, so that the new construction stands out as separate from the original house.
The entrance door at the raised level has been split, creating the illusion that there are two doors, just like in the other terraced houses: but in actual fact the new “door” is only a window, and the metal porch canopy appears, on first sight, to be a staircase parallel to the real one.
Introduced by the rounded corner, the new façade on Denman Road adds another variation: on the raised level is a glazed pavilion screened with dark wood mullions paying homage to the Victorian conservatories containing a living room or tearoom at the back of 19th-century London homes. The same decoration appears on the upper level, in the boundary wall around the courtyard closing the lot behind the house, and in a band of timber mullions screening the ground-floor kitchen window, forming an easily recognisable identifying motif.
The building’s interior layout has been reconfigured. The ground-floor entrance to the new home leads into a kitchen, living room and dining area in an open-plan layout, with sliding glass doors to the private gardens at the front and back of the property, both protected by the garden wall. The adjacent ground-floor apartment has a small courtyard and a little back terrace letting light into the interior, while the maisonette on the upper levels has been reorganised by relocating the internal staircase in a more central position. 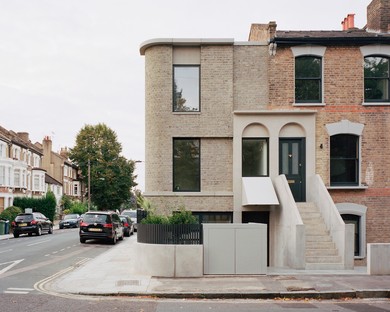 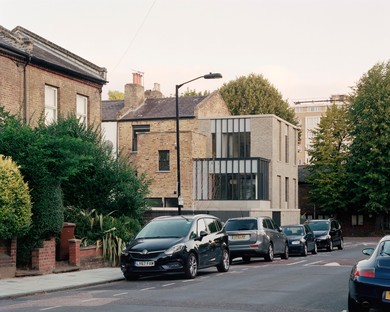 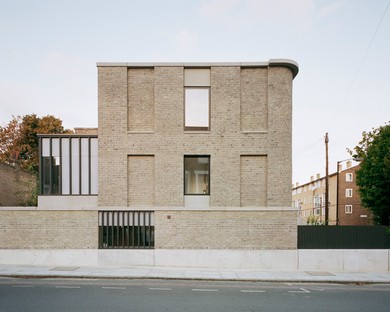 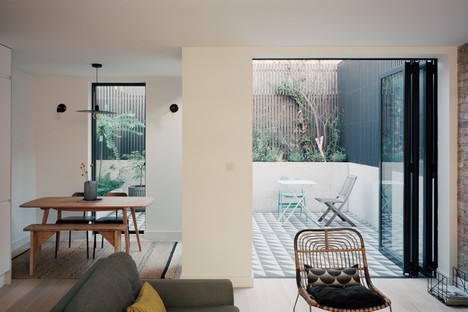 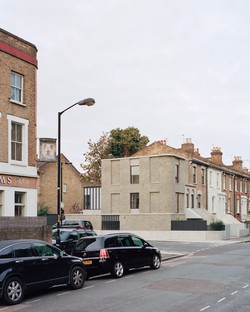 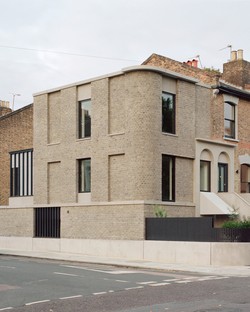 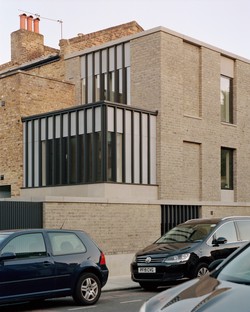 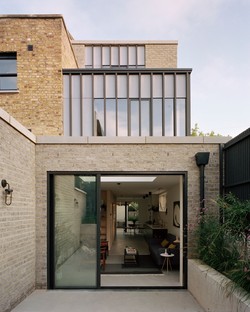 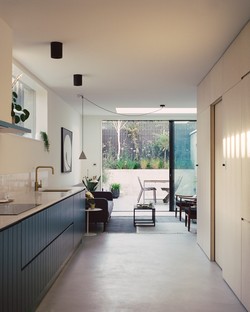 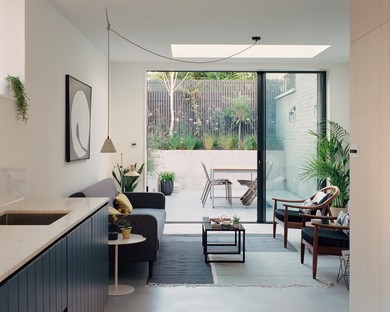 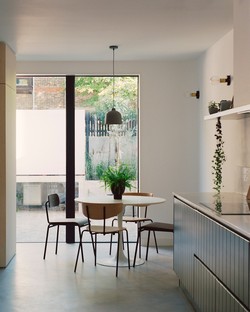 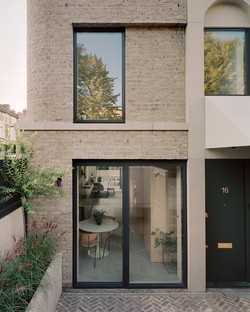 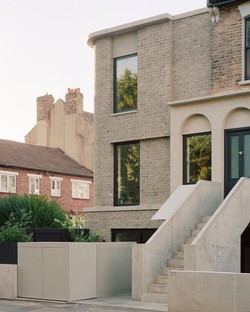 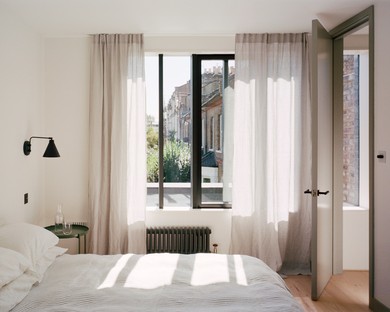 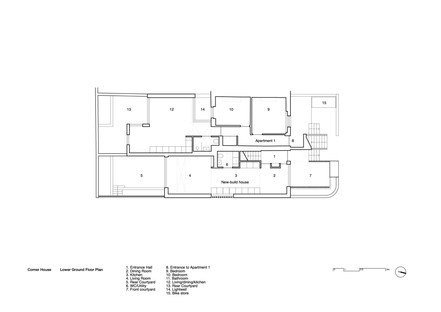 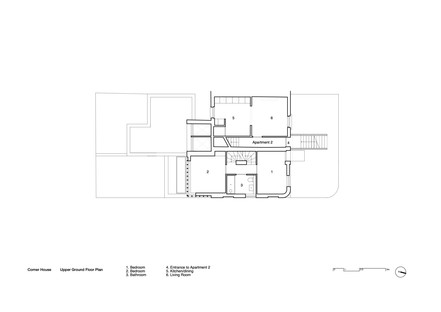 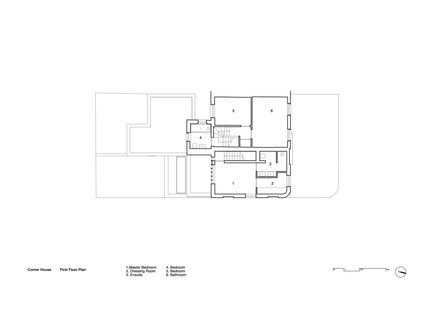 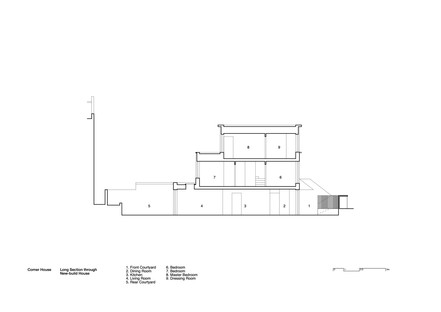