The new Xinxiang tourist and cultural centre designed by the Zone of Utopia and Mathieu Forest Architecte studios is a new landmark for the city in China. The iconic building has been conceived as an out-of-scale sculpture that resembles a huge mountain of ice cubes, a direct and evocative reminder of the winter sports to which the entire tourist district will be dedicated and that will also include a indoor ski slope. 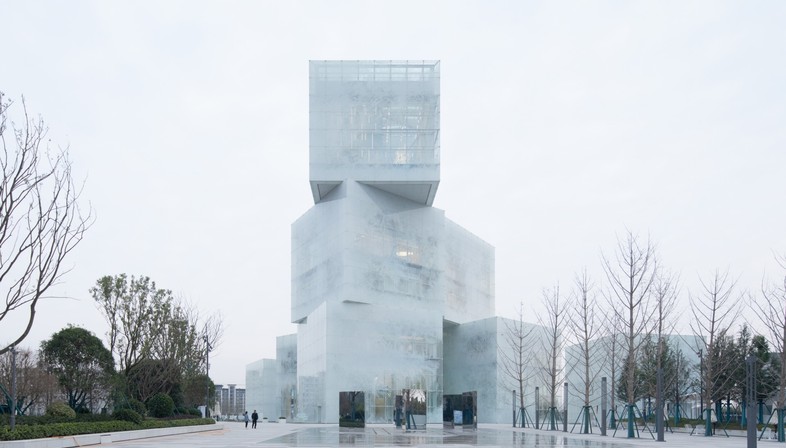 The Zone of Utopia and Mathieu Forest Architecte studios have designed the new tourist and cultural centre in Xinxiang, China. Architects Qiang Zou and Mathieu Forest, founders of the two studios based in Paris, have worked together for some time at the Atelier Jean Nouvel and, since 2018, have decided to continue in their professional partnership, sharing a cultural and poetic approach to architecture.

The new Xinxiang district will be dedicated to winter sports and its exceptional facilities – including an indoor ski slope – are expected to attract many visitors and tourists, local as well as from neighbouring regions.
It was therefore necessary that the building designed by Zone of Utopia and Mathieu Forest Architecte would become an important reference point for the neighbourhood and a new landmark for the city. The architects’ solution was to create an iconic building, an out-of-scale sculpture where it is not possible to discern the number of floors. The architecture, which immediately brings to mind the winter sports to which the entire district will be dedicated, is characterised by a pure form made up of nine "ice cubes". The ice cubes stand about 17 metres tall each and have been assembled overlapped and staggered. There are no visible load-bearing structures. The façades of the cubes are made of glass panels supported by stainless steel cables and connected by minimal elements. The intent is to offer a light and diaphanous image of the building, letting everything appear like glazed lace, through which the light can be observed. Indeed, when approaching the building, the glass façades reveal a texture made up of a multitude of tangled translucent "ice crystals". The panels thus become filters for the light and ensure privacy inside the building. In addition, seen as a whole, and from the outside, the building looks like an illuminated and inhabited block of ice.
The architects, however, were not looking to create a static sculpture. On the contrary, the new Xinxiang cultural centre reflects the surrounding context and changes continuously according to the weather conditions, the seasons and the time of day. An effect further enhanced by the presence of water and the nearby lake, on which the architecture seems to float. Moreover, depending on the direction and the path taken to approach the building, the volume reveals itself to visitors in a different way: from one side it appears as a balanced composition of volumes, from another it takes on a more dramatic character thanks to the pronounced overhangs of the stacked cubes. On the north side, instead, the cubes come closer together to create the vertical gap that forms the entrance, inviting visitors to step inside. At the top of the complex we find the volume of the Sky Lounge, where the public can stop and admire the surrounding landscape, taking in the 360-degree panoramic views.
At night, in the dark, the architecture transforms into a lighthouse and, with its fully illuminated façades designed to attract visitors, it becomes a landmark for the entire neighbourhood. 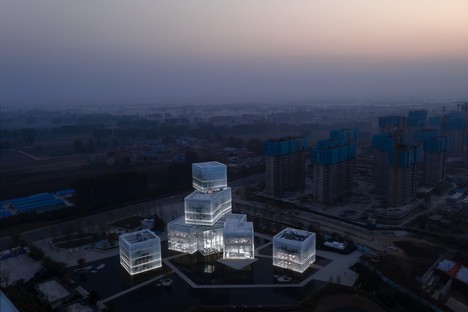 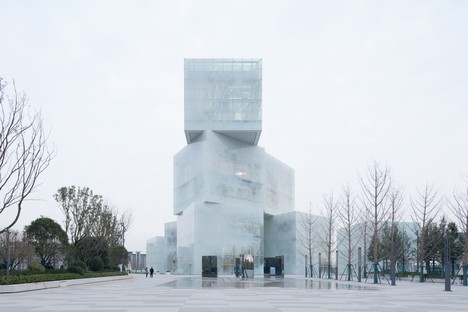 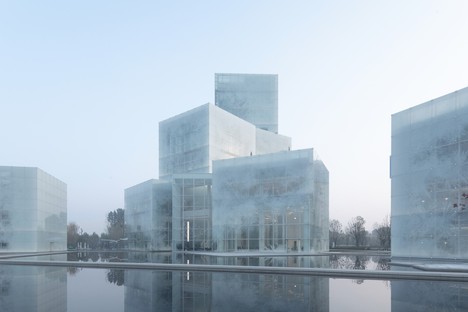 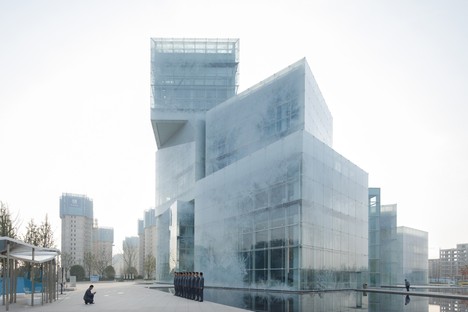 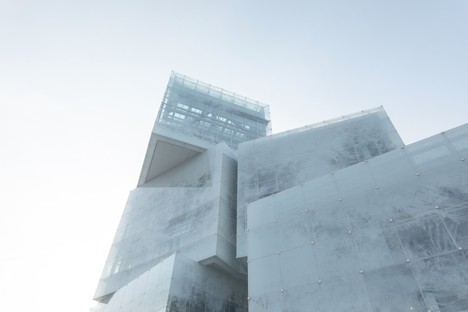 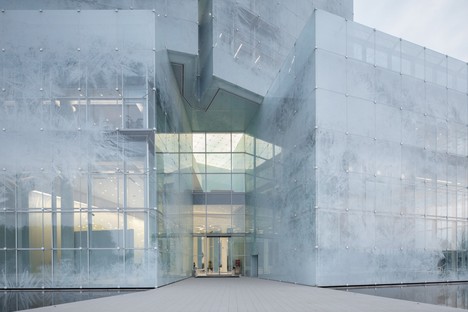 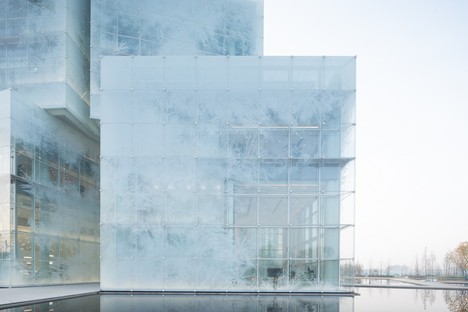 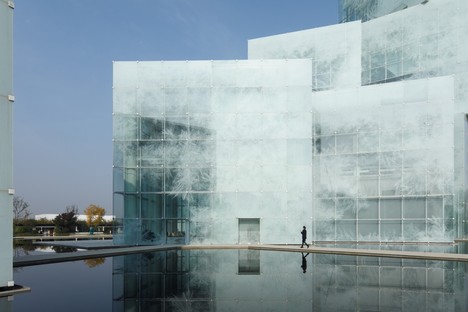 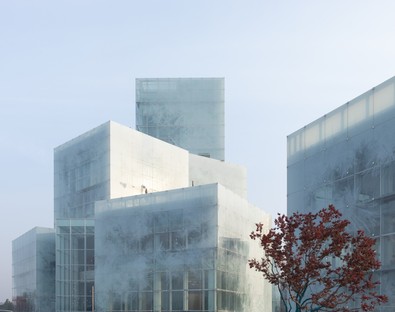 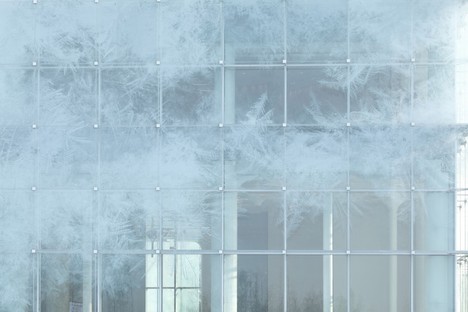 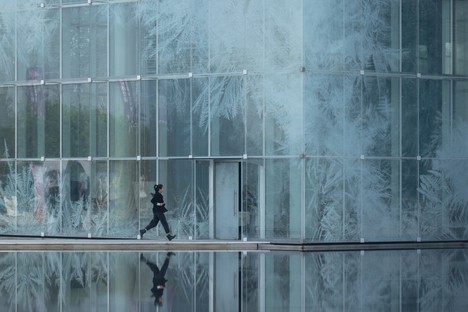 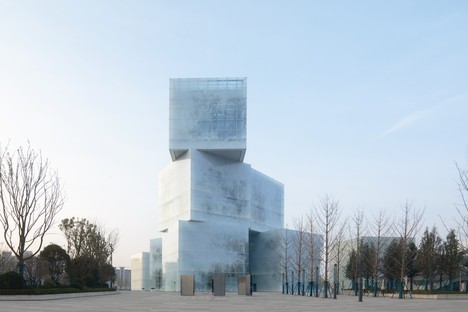 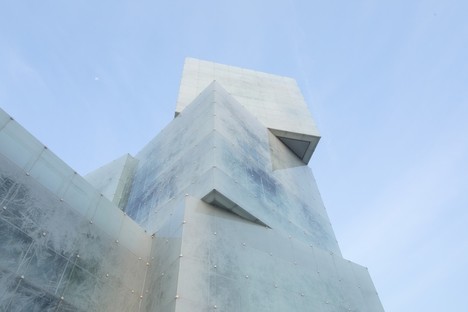 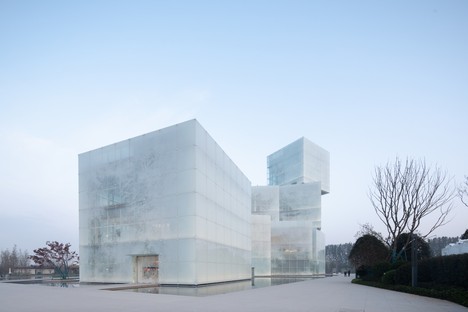 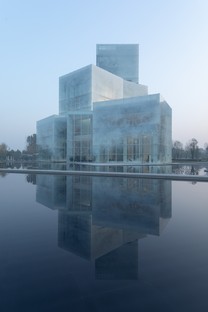 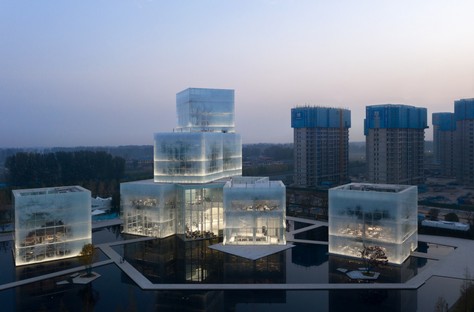 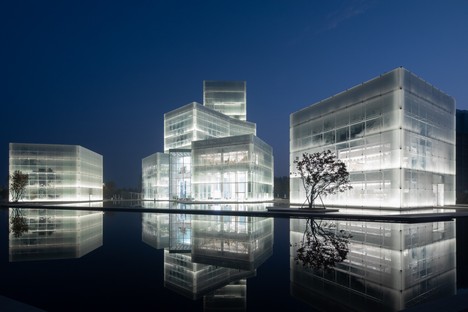 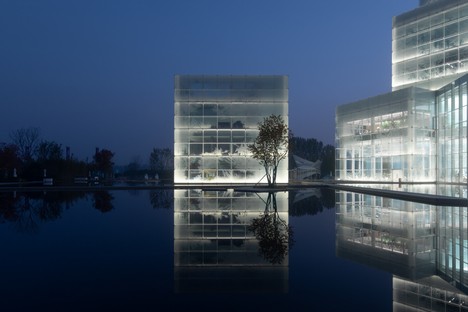