Work is underway on Zhuhai Jinwan Civic Art Centre in China, the new centre for contemporary creativity designed by Zaha Hadid Architects for one of the world’s most dynamic regions. The complex will house four separate cultural institutions and benefit from railway links with the cities of Guangzhou, Shenzhen, Macao and Hong Kong. 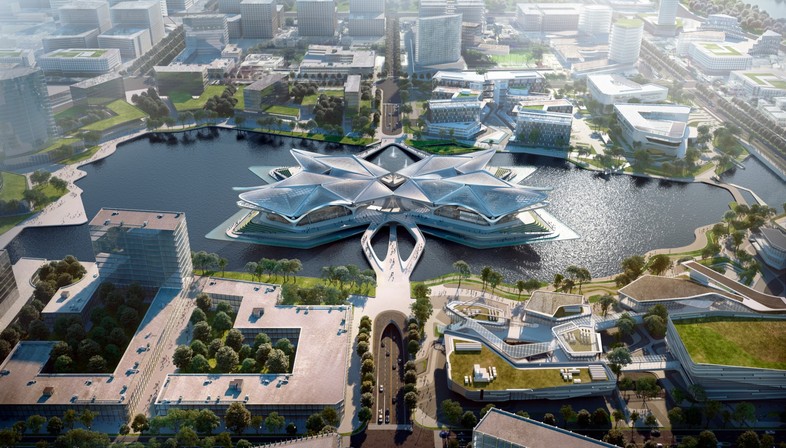 A big flower with steel petals is about to bloom in the Jinwan district of China’s Zhuhai prefecture: the new centre for contemporary creativity designed by Zaha Hadid Architects, currently under construction in the heart of the Jinwan district’s Western Ecological New Town. Located in southern China, one of the world’s most dynamic regions, the new centre will enjoy direct links with the city of Zhuhai and its airport, and connections with the major metropolises of Guangzhou, Shenzhen, Macao and Hong Kong via interchanges.
The new Zhuhai Jinwan Civic Art Centre rises in the middle of an artificial lake. The landscaping design of the centre and the lake are an integral part of the "sponge city" initiative for the city of Zhuhai, requiring natural permeation, storage and reuse of at least 70% of the city’s rainwater and employing aquatic flora and fauna to naturally filter out contaminants and reduce water consumption.

Zhuhai Jinwan Civic Art Centre appears to be a single complex measuring 170 metres in width and 270 metres in length, but in actual fact the facility houses four separate cultural institutions for the city: a 1200-seat theatre; a 500-seat multipurpose hall, a scientific centre and an art museum. The buildings housing the four institutions each have their own distinguishing features and are contained in the four petals of the flower, or wings of the complex, two large and two small, arranged symmetrically around the central plaza. A system of pathways incorporating bridges over the lake allows citizens and tourists in Zhuhai to access the public plaza in the middle of the complex, an open-air foyer shared by all four cultural institutions which will become the heart of Zhuhai Jinwan Civic Art Centre. People in the plaza will be able to look into the buildings through their glazed façades, connected via footbridges and stairs. When the work is completed, the theatre and art museum will appear light in their materiality, while the multifunctional hall and the science centre will have a darker palette of materials; an outdoor amphitheatre on the western side of the centre will host open-air performances and activities.
The architects designed a latticed steel canopy over each of the venues in the complex inspired by the chevron patterns of migratory birds in flight in the skies of southern China. Made up of modular elements, this roof soars above the four buildings and the common areas, ensuring that the complex is seen as a unified whole. At the same time, as they are made of up elements configured through repetition, symmetry and changes of scale of the basic unit, the roof module may be adapted in response to the particular functional requirements of each of the four buildings in the Art Centre, allowing different amounts of light into each building as appropriate for its function and orientation. 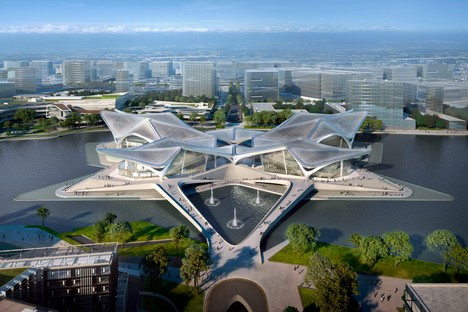 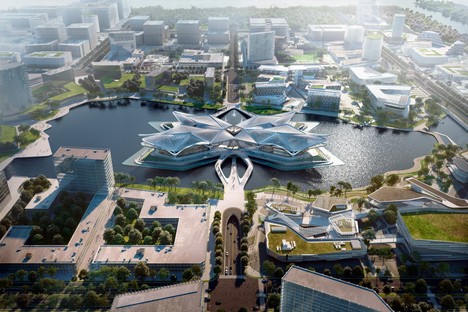 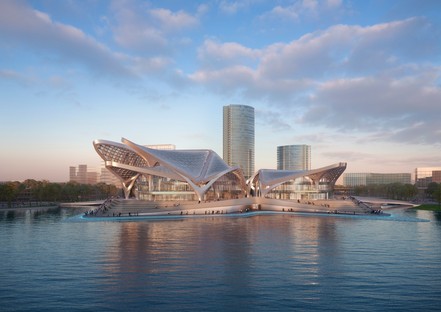 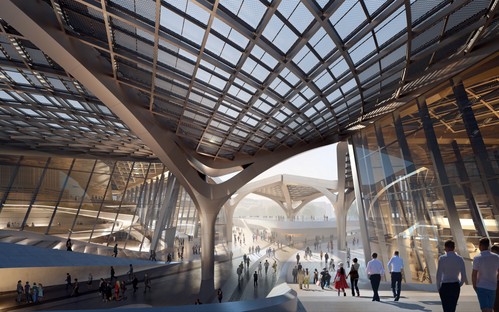 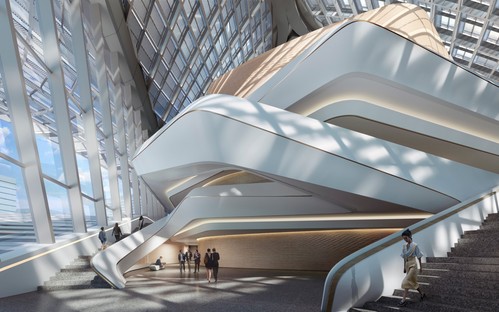 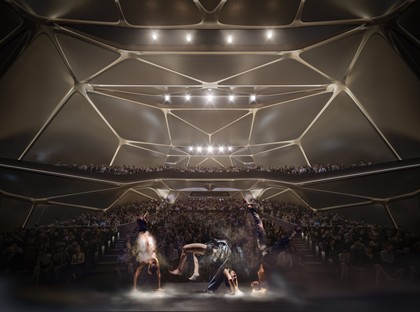 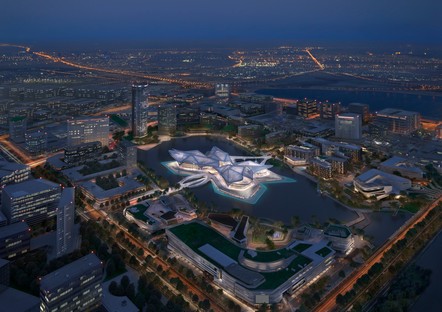