Vessel, the new gem from Heatherwick Studio for Hudson Yards

New York’s new urban landmark designed by British architect Thomas Heatherwick was completed in March. When designing it, the key points were accessibility for the public and maintaining a unique and iconic shape that dominates the central square of Hudson Yards. 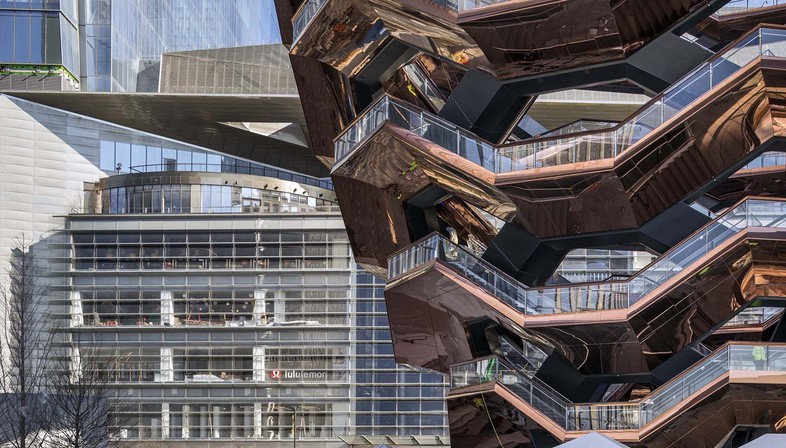 “Vessel is a new kind of urban landmark”. These were the words chosen by Heatherwick Studio to describe its latest, impressive work, completed this March on the Upper West Side of Manhattan. To be exact, it is located in the square in the centre of Hudson Yards, one of the largest property projects in the history of the United States, which is transforming the former railway station into an entirely new neighbourhood, complete with - amongst other features - five acres of parks and public spaces.

So, what exactly is a new urban landmark? Concretely speaking, it is sixteen floors with a circular plan, almost two thousand five hundred steps, about eighty terraces, and views over the Hudson River and Manhattan. In a word: Vessel. Oxford Properties asked Thomas Heatherwick to create the central piece for Hudson Yards, something to welcome visitors into the heart of the new neighbourhood, something that could become a landmark meeting point in the central district of the Big Apple.

The thorniest issue when it came to designing Vessel was creating something memorable that could hold its own amidst the plethora of towering skyscrapers all around it and confronted with the scale of the huge public space located in front of the square itself. As such, the first phase involved many configurations being examined, then eliminated one by one, finally resulting in the decision to create a single entity, rather than a series of objects spread out in space. So, instead of an inert sculpture, Vessel was to become an exciting place, a place for meeting and participation.

Given these premises, research continued by analysing what formed points of spontaneous aggregation in cities. They were often simple, obvious infrastructures - part of daily life, but with an allure that naturally evoked a sense of conviviality. What passed this difficult stage of the selection was the archetype of steps, the most egalitarian seat in existence. One could make infinite references here, but from an endless list of famous examples, Heatherwick Studio wished to focus on the Spanish Steps in Piazza di Spagna, Rome.

However, in order to design steps on an appropriate scale for Manhattan, another reference was needed: Indian stepwells, known by the name of Kalyani, Pushkarani, Barav or Baoli, depending on the region. These are wells in which a multitude of flights of steps cross, forming a single, incredible regular pattern, which makes it possible to reach the water regardless of its level. And it is this structure that was the real source of inspiration guiding the Heatherwick Studio team when they created Vessel, with its peculiar shape which can now be explored on foot.

Unlike the Indian Baoli, Vessel is specifically designed not to hold water, and as such, there are many openings between the flights of steps. In this way, a three-dimensional grid has been created that faces both outwards, like a lookout over the views of the city and the river, and inwards, like an amphitheatre revealing the spectacle of the stepped pattern, working as a centripetal force capable of attracting observers towards the centre. From an urban point of view, Vessel is an extension of the square in which it sits. This square extends upwards, providing more than a mile of new routes in the construction, all explorable in various direction.

Given the sculptural importance of the work and its unusual shape, it was essential for this new urban landmark to be self-supporting. To achieve such a result discreetly, without adding columns or beams, a steel backbone has been inserted between each pair of staircases, creating a clear division between the “above” and “below” of each flight.

Each of the 154 intersecting staircases that make up Vessel was therefore made entirely to measure, from the joints to the handrails, all the way up to the shiny copper covering on the bottom part, making for attractive reflections and light shows for anyone observing it from below. Seventy-five colossal steel parts were made in Venice and brought to the United States in six different shipments. Once they reached New York, they were brought up the Hudson aboard huge barges and assembled on site in a process that took three years.

Regardless of its size, Heatherwick Studio’s project was built on a human scale, so that it would feel natural to explore it by climbing and enjoying the views it offers. In short, Vessel’s strong point is its simple complexity. The basic concept of a staircase as a meeting point, but expanded and stressed to make it imposing, contemporary and worthy of a city like New York. 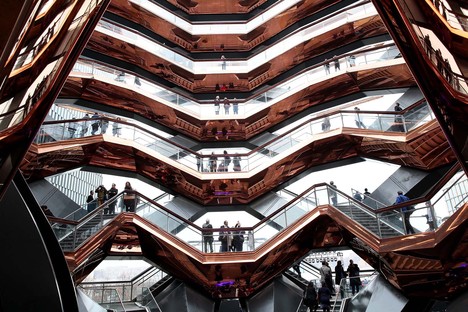 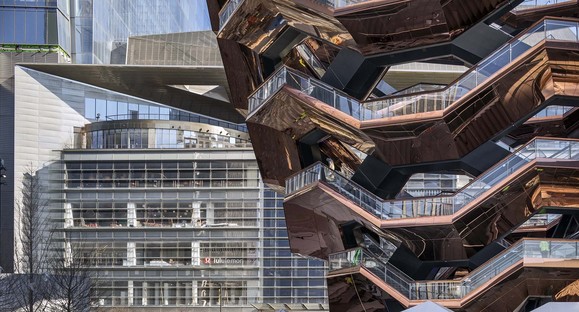 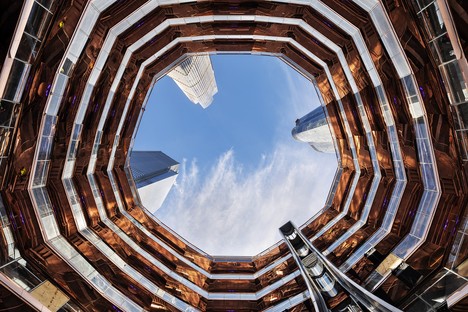 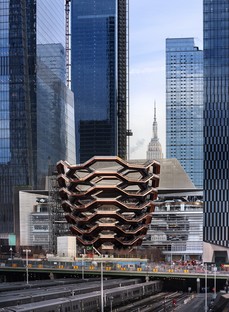 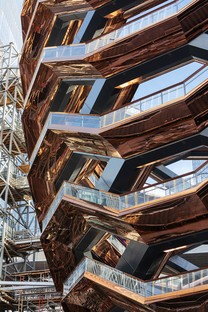 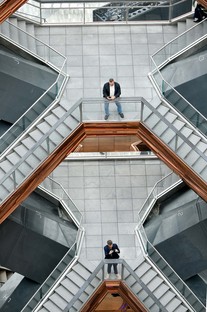 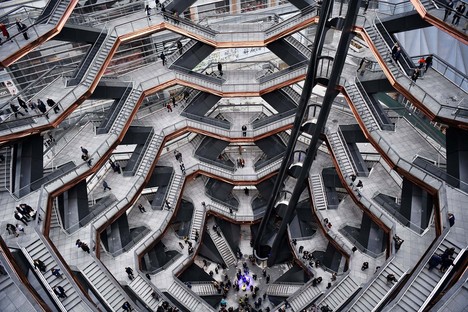 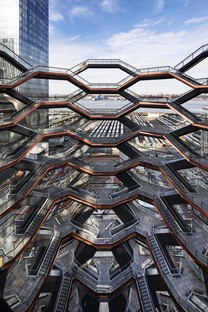 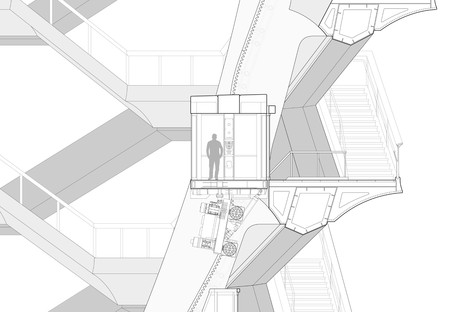 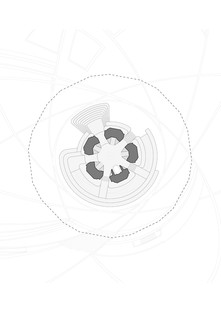 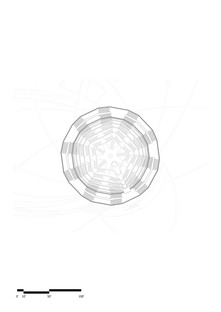 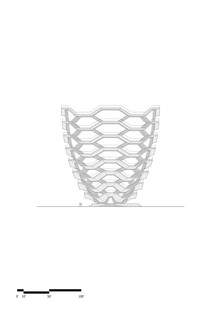 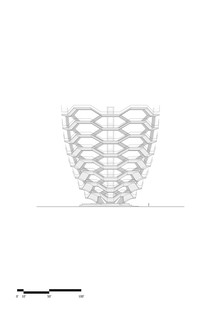 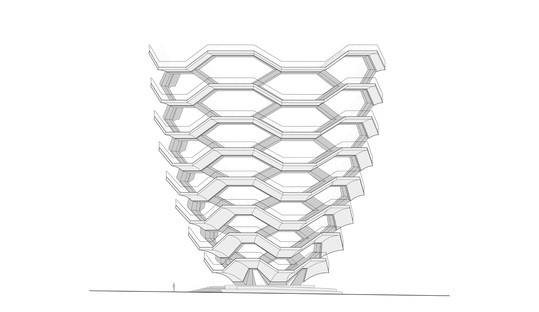 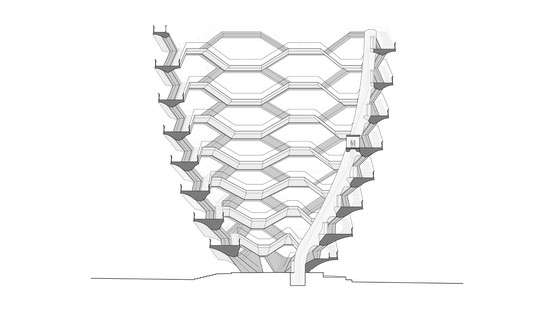 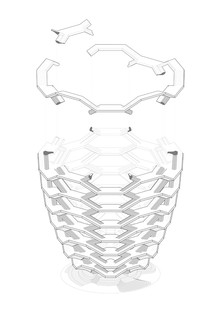 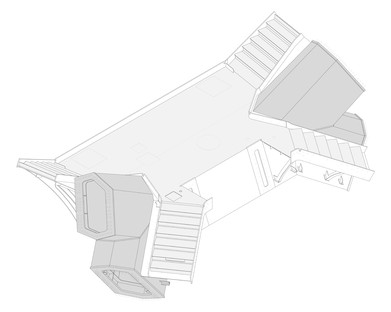