UNA Arquitetos, the studio coordinated by architects Fernanda Barbara and Fabio Valentim, now partners in UNA Barbara and Valentim, designed Villa Lobos, a home in a panoramic location on a hilltop in a residential district in San Paolo, Brazil which maintains deep visual connections with the luxuriant garden around it. 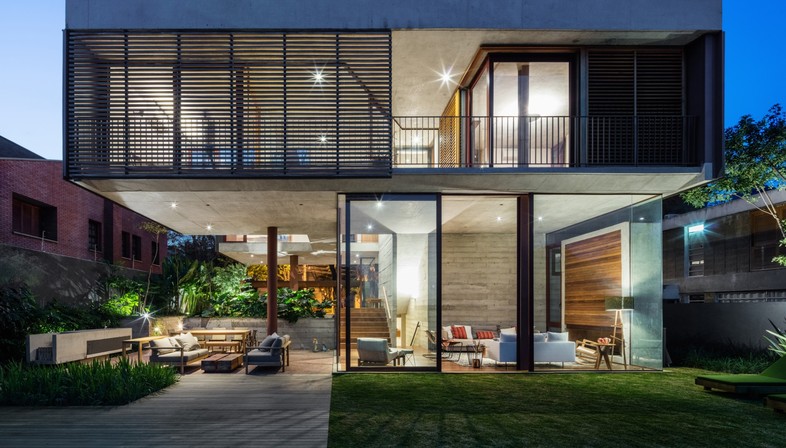 Architects Fernanda Barbara and Fabio Valentim designed a contemporary family home, Villa Lobos, in a panoramic location on a hilltop in a residential district in San Paolo, Brazil. The architects first oversaw the planning of the project as coordinators of UNA Arquitetos, continuing as partners in the studio UNA Barbara e Valentim. The house has beautiful panoramic views over the extensive wetlands of the Pinheiros River and is set in an area abounding with vegetation, a condition which the architects take advantage of, using plenty of glass to establish profound visual connections with the home’s surroundings.
The particular geography and the need to make the most of the home’s surroundings are the elements that inspired the architects to come up with a project based on the natural lay of the land. This decision is reflected in the organisation and distribution of space in the home: the living area, consisting of a dining room / kitchen and sitting room, is a single continuous space with functions on different levels. The sitting room is sunken below the other two spaces, becoming a double-height space, in response to the lower level of the land. The house has three gardens following the differences in level of the lot: we enter through the first garden, containing a big cherry tree, at street level, the highest level on the site, while the second garden, which becomes the home’s inner courtyard, is in a central position in the construction and separates the garage from the veranda which is located on a lower level. Lastly, on the same level as the veranda and the living room, the back garden extends across the entire width of the lot and includes a swimming pool.
In the central garden, two metal columns support a large metal beam, fully 16.5 metres long, visible above the roof, like a gigantic frame from which the volume of the home’s first floor is suspended. A cutout forming a void over the central garden permits daylight to illuminate the interior and establishes visual links between the two levels in the home. In this way, people in the living room or on the veranda can see and talk to someone in the study or bedrooms upstairs. In the middle of the bright, open layout of the ground floor, bounded only by the transparency of glass, is a big block of concrete: the core containing the stairway to the upper levels in the home. This opaque element limiting our vision adds to the sense of wonder we feel upon reaching the upper level, where the view opens up again over the vast landscape around the home. The first floor contains the home’s most private spaces, the parents’ and children’s bedrooms, aligned on opposite sides of the floor plan. Lastly, the top level of the home is a panoramic rooftop terrace from which to enjoy an incredible view of the city. 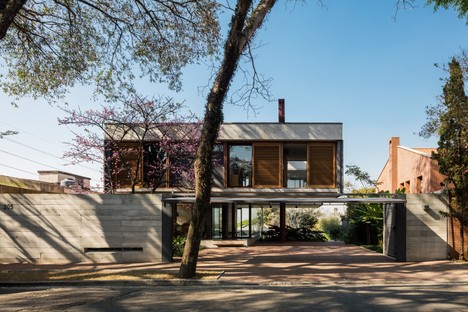 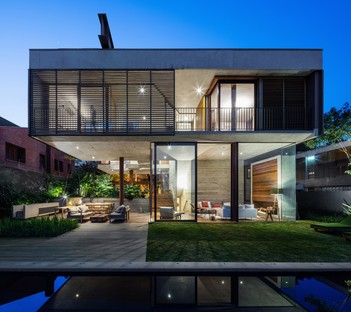 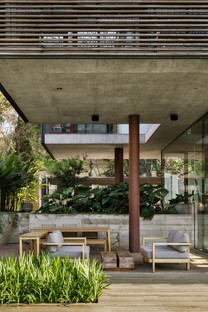 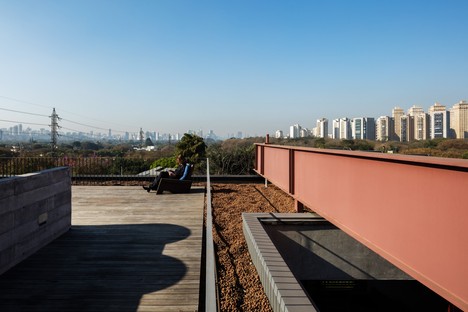 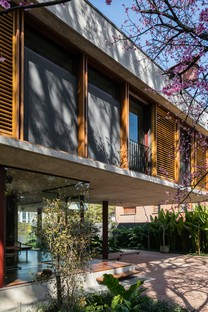 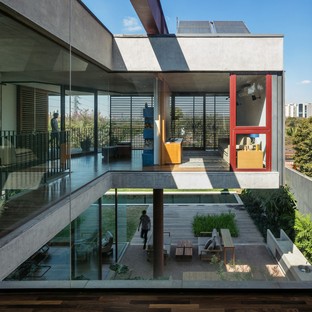 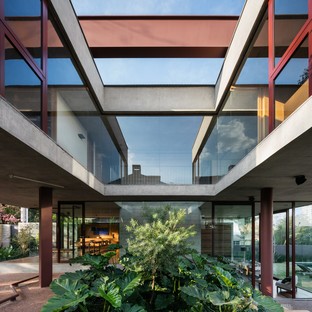 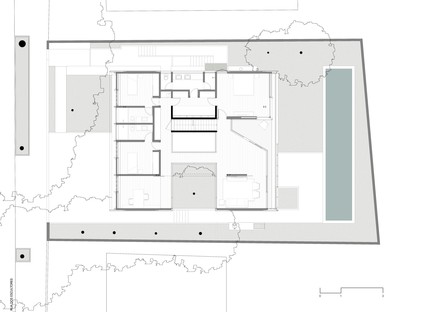 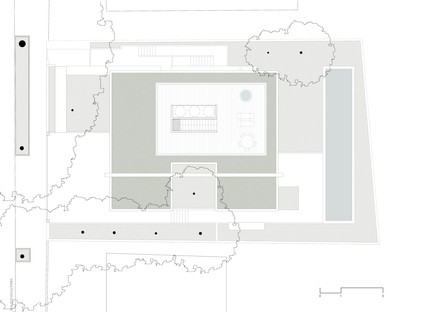 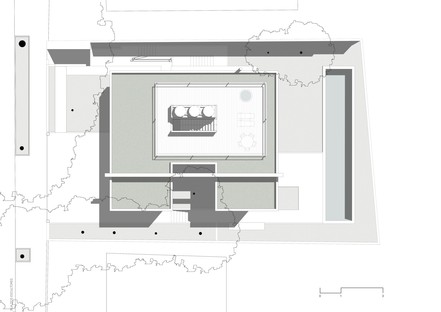 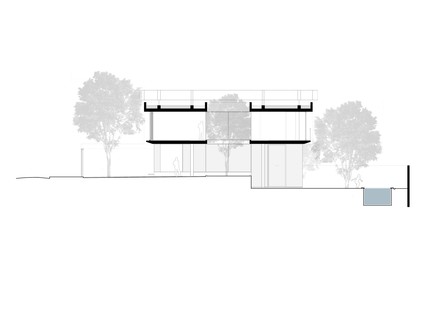 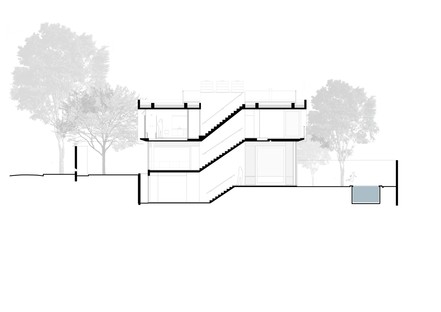 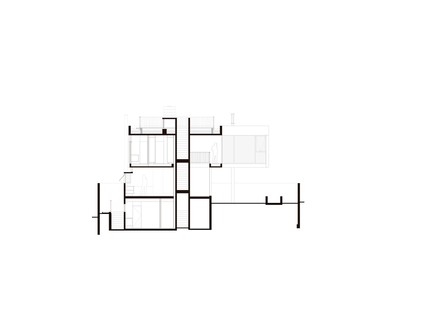 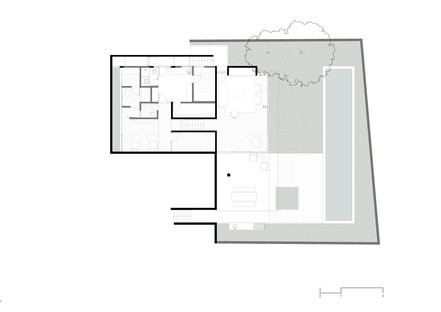 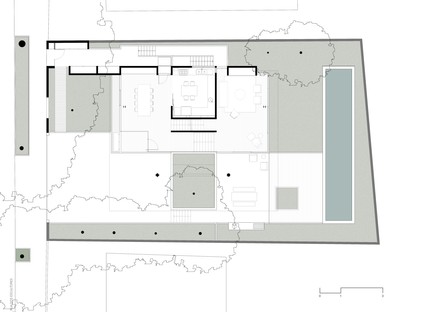 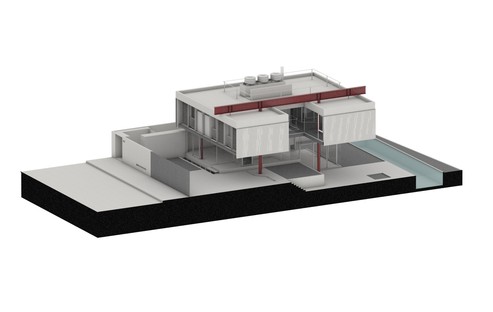