UNA arquitetos, under the leadership of architects Fernanda Barbara and Fabio Valentim, designed a new family home, Mantiqueira House, surrounded by greenery and relating to its natural surroundings in multiple ways. The recently completed home is located in São Bento do Sapucaí, Brazil, a resort town about 200 km from San Paolo known primarily as a rock-climbing destination in the Baú mountains. 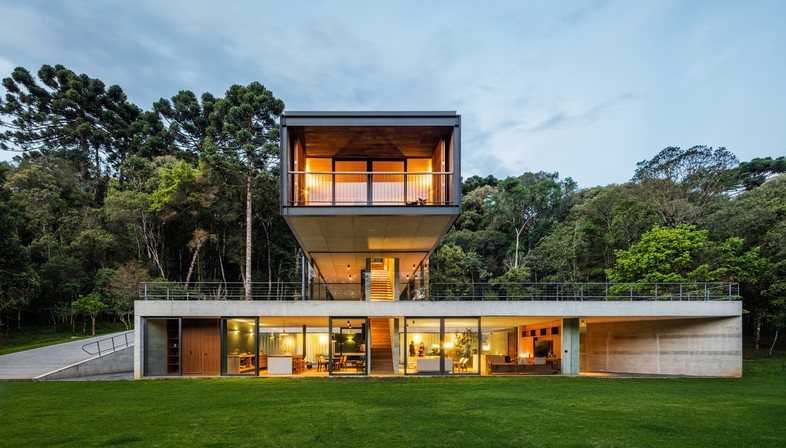 In São Bento do Sapucaí, Brazil, a resort town about 200 km from San Paolo primarily renowned as a rock-climbing destination in the Baú mountains, UNA arquitetos designed a new family home, Mantiqueira House. The big house is surrounded by greenery, allowing its inhabitants to relate to the natural environment around them in multiple ways. This was the key concept inspiring architects Fernanda Barbara and Fabio Valentim in responding to the client’s request to establish a variety of different relationships with the land around the house, with multiple panoramic views over the highly various landscape.
Architect Fernanda Barbara emphasises that no trees were cut down to build the house, which was constructed without altering its natural surroundings.
The selected site is a clearing in a dense forest in the Mantiqueria mountains, a 545 square metre area on a slight slope by a stream with a splendid panoramic view of São Bento do Sapucaí.
The architects designed a home for the site composed of two main volumes. The first, forming the base of the building, is made of concrete and fits into the relief of the land even while remaining partly detached from it. This volume contains the two bedrooms, utility areas, and the living area including a sitting room, dining room and kitchen, a lounge area with a sauna, with an open inside patio connecting all the social parts of the house. The idea of non-stop fluid motion between inside and outside is the key feature of the home. As architect Fabio Valentim explains, there is no distinction between rooms; the entire home is conceived as a single space where “you cook, eat, talk and enjoy the landscape".
The second volume in the building is perpendicular to the natural slope of the land and has a metal frame. It contains two bedrooms and a sitting room, each of which has balcony and terrace spaces opening onto the outside in three different directions to offer three different views of the landscape. The architects describe the upper volume as a “waggon”, a metal structure which was assembled on-site and then raised with two cranes to be positioned on its concrete supports, the core of the staircase joining the two volumes and a partition wall positioned symmetrically in relation to it. The architects use the clearly visible detachment between the two volumes to create a route that joins the house with the land via a big ramp and includes a large terrace, a bridge, a water garden and a swimming pool. As in other parts of the home, in this space the multiple relationships with greenery and the landscape maintain constant dialogue between the home and its surroundings. 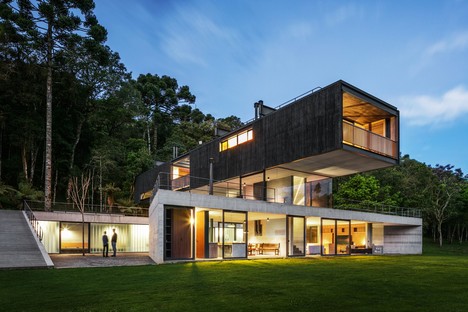 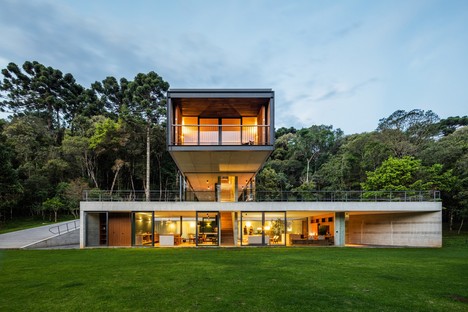 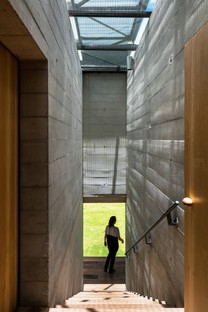 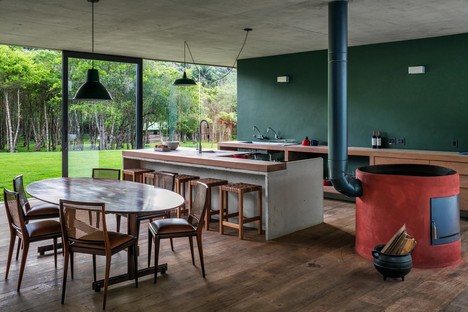 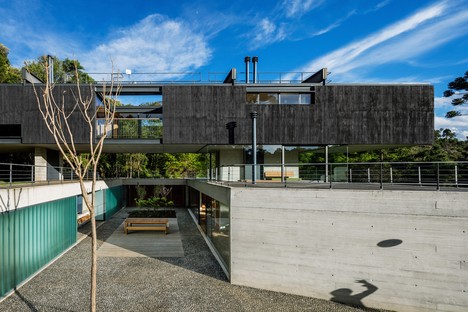 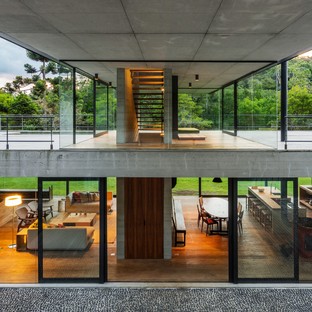 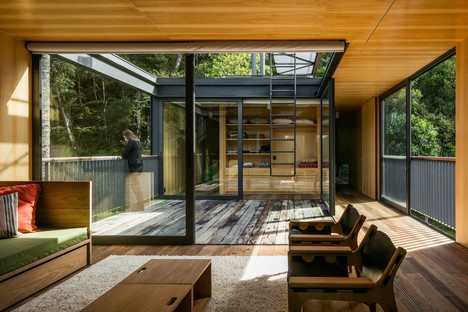 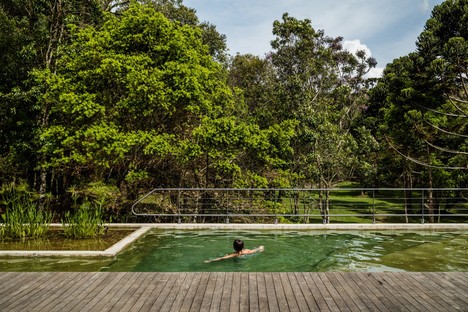