A spiritual tourist visit concept lies at the heart of the belvedere with a tower overlooking the Swan Lake in Rongcheng, China, designed by TAO: Trace Architecture Office. A flat volume stretches out, ‘grazing’ the ground, whilst a tower provides a stunning raised viewpoint over the entire lagoon. 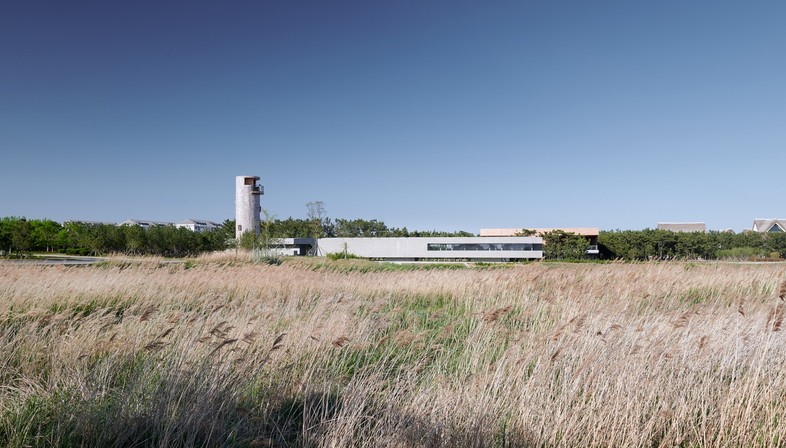 The recent design of a belvedere with a tower overlooking the so-called Swan Lake in Rongcheng, China - the work of TAO Trace Architecture Office - is particularly interesting in terms of its architectural typology and the approach that the firm has adopted. Floornature has long been keeping an eye on Hua Li, founder of TAO, and his way of approaching projects that are both wide-ranging and distinctive in type, such as the Museum of Handcraft Paper, for which he opted to cover the interior walls of the museum’s rooms with the paper handmade by the villagers themselves. Or like in the primary school in Xiaoquan, in the province of Szechuan, rebuilt after the earthquake which hit the area in 2008, where the public building became a symbol of the village itself, echoing the shapes of streets and squares in an effort to establish a new place for the community. These, much like other projects he has recently had a hand in, convey his desire to amplify the initial intention of the design, generating new features, as is the case in the belvedere over Swan Lake in Rongcheng.
It is important to know that the natural park in question is a vast, flat lake area located near the Yellow Sea which made up of many bodies of water and is characterised by reed beds and meandering watercourses. Every year in October, when the coldest season begins, visitors can witness the migration of the royal swans from Siberia, from Lake Baikal and other far-off places: during this seasonal ritual, over ten thousand birds come to these shores for the winter and stay until March, looking for food, playing and enjoying the sun. This natural spectacle, often called a true marvel, has given rise to a specific kind of tourism which attracts a great many photography enthusiasts, which is why in 2017, the local administration decided to build a structure which could provide these tourists with hospitality and refreshment services. However, although the request was initially limited to a covered structure with just a café and public toilets, the plans were later expanded as a result of an analysis phase carried out by TAO about what expectations people actually had from the site. The needs that emerged from of this survey led to the design of a belvedere architecture, i.e. a structure capable of containing the basic amenities originally requested, but in a form designed to enhance the tourist experience by showcasing the distinctive qualities of the site.
As a result, Hua Li dreamt up the complex, comprising two separate yet juxtaposed volumes, located in the northeast corner of the park. The first building - a short parallelepiped with a length of up to 71 metres, containing a restaurant, toilet facilities and the belvedere path - is located beside a pine forest and overlooks the lagoon; the second volume - a cylindrical wooden tower standing at around 15 metres high, slightly offset from the first - serves purely to provide a place from which to contemplate the landscape. Looking at the overall structure conjures up suggestions of this public complex as a religious site with a sacred hall and a bell tower, a nod to the spiritual approach with which enthusiastic visitors flock to the lake to admire the surprising natural phenomenon of the swans’ migration. In the first, dubbed the bridge building, people follow a path of discovery and knowledge which varies in terms of moments and spaces: the bar and toilets are at the heart of the building, each facing a ring-shaped walkway, where indoor parts on the lower level interlock with outdoor parts on the roof. The tower encourages visitors to observe the site and the behaviour of the swans from a higher altitude, allowing them to see the entire lake.
The two buildings make up an interplay of opposites: the first is a concrete volume which extends out towards the lake to the south, whereas the second is a wooden tower which climbs skywards. Five massive plinths raise the structure of the bridge house from the ground and the water by a few metres, lending the whole thing a certain lightness, despite the material it is built out of. Covered with shingles on the outside and clad with wood inside, the tower, meanwhile, conveys the language of a temporary installation. Where the first path is open and permeable, the second is enclosed and shaded.
Structurally speaking, the building occupies the space between two concrete slabs poured on-site, interspersed with shear walls to reinforce the division of the spaces. The pine formwork impresses a fine wood-grain pattern onto the walls which brings the manmade construction closer to the natural landscape in which it is ensconced. The tower, on the other hand, is enveloped by waterproofed wooden beams clad with shingles, and inside is a spiral staircase, which is entirely wooden. As visitors climb the stairs, only two small windows provide a tantalising glimpse of the panoramic view waiting to be enjoyed from the roof. Indeed, the light inside the tower comes almost entirely from the skylight at the top, inspiring the idea of a visit based on discovery and fascination. 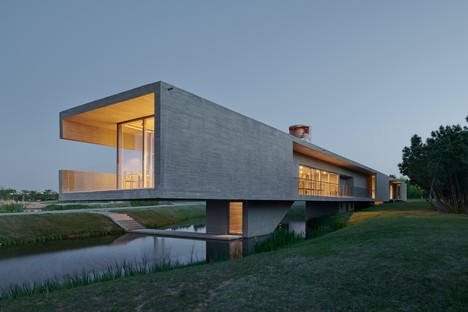 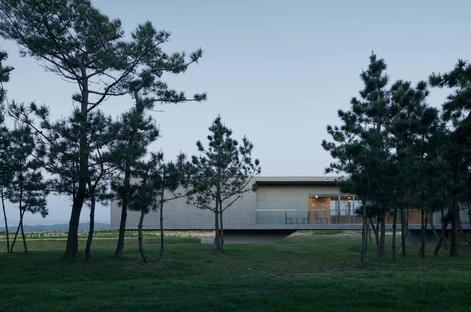 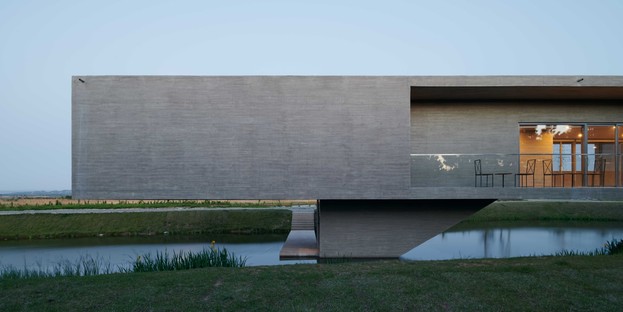 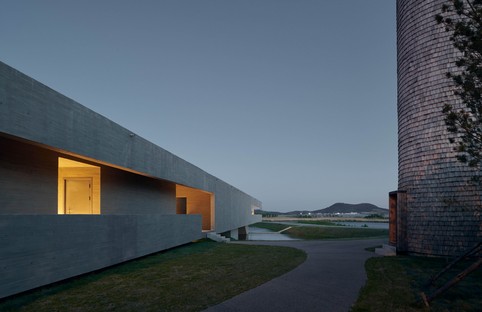 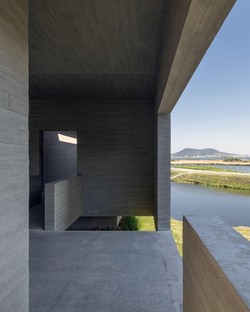 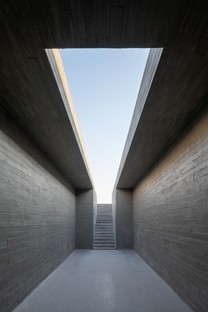 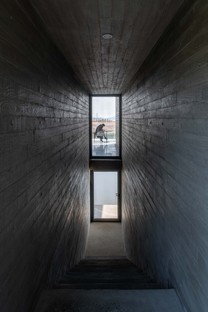 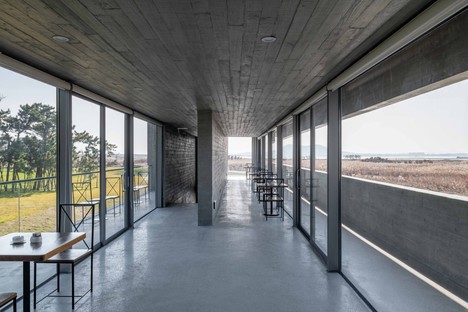 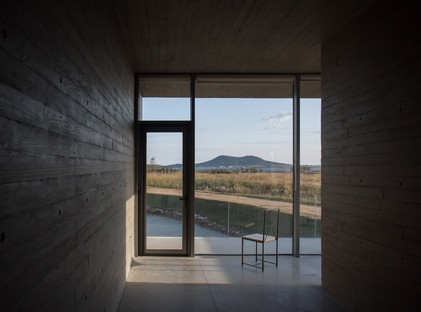 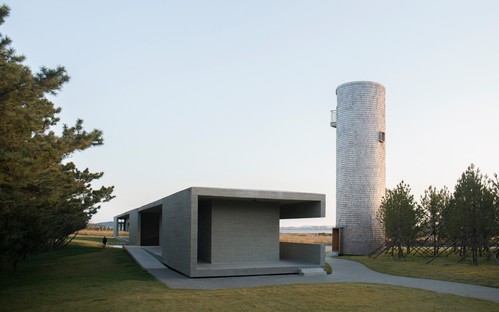 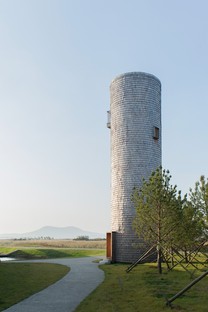 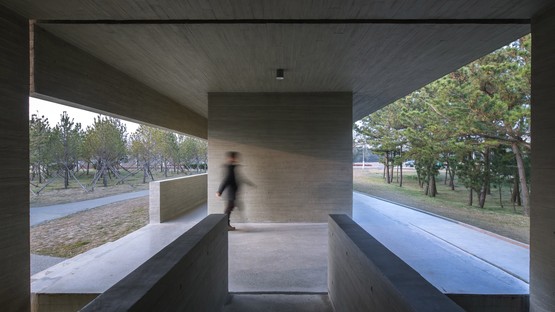 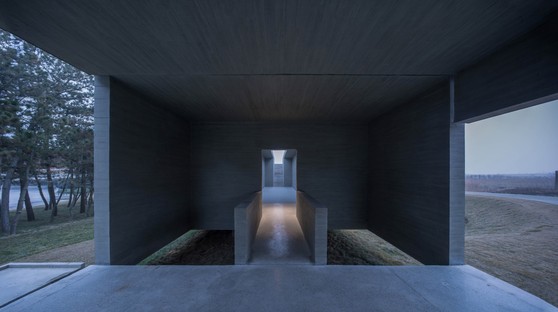 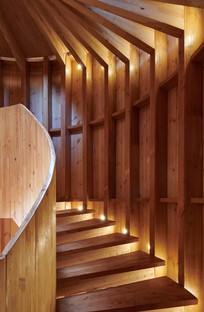 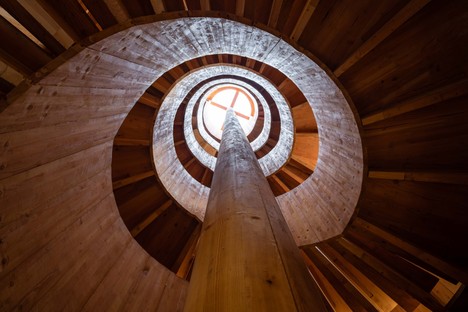 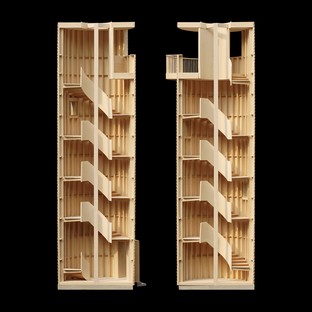 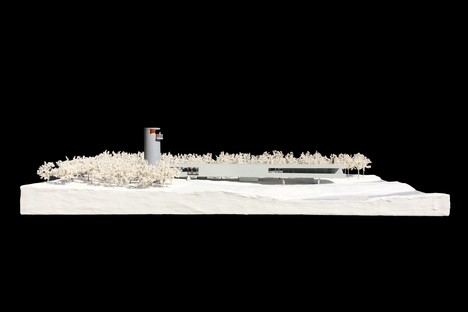 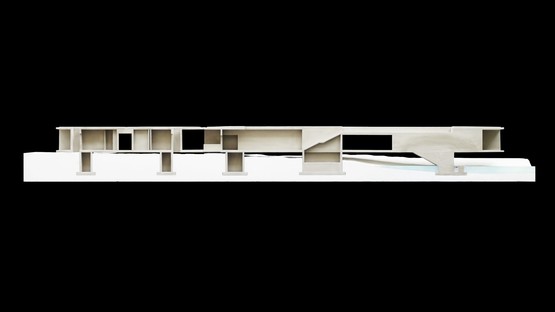 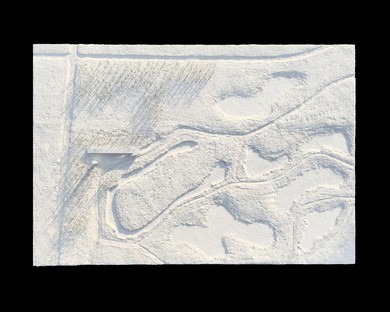 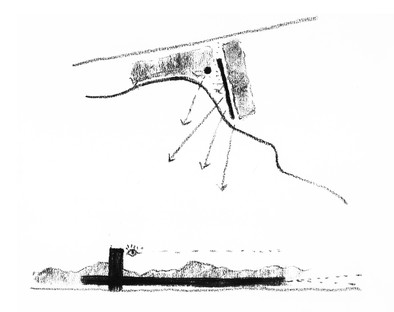 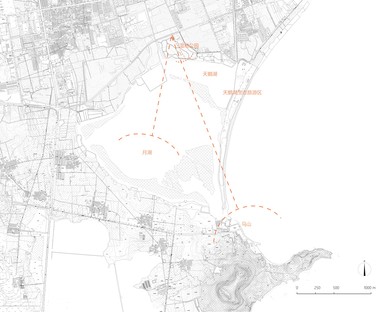 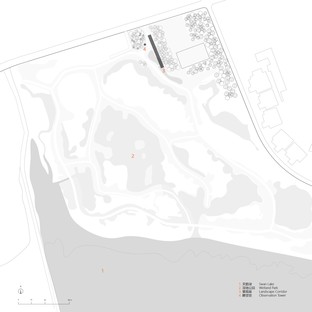 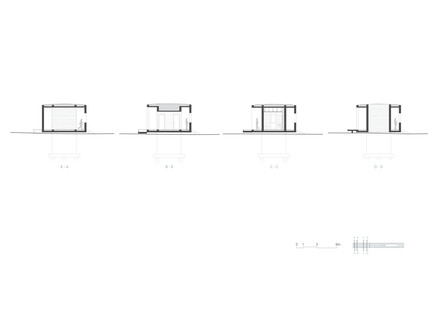 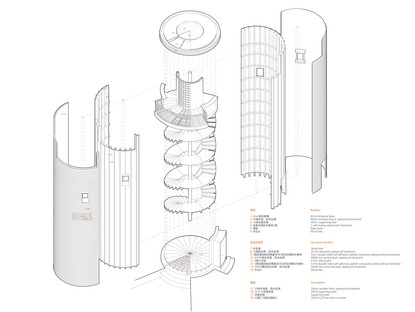