In the design of the Glassell School of Art in Houston, Steven Holl took into account the other buildings in the Museum of Fine Art, a citadel of culture with twentieth-century expansions by Mies van der Rohe, Rafael Moneo and Isamo Nuguchi. 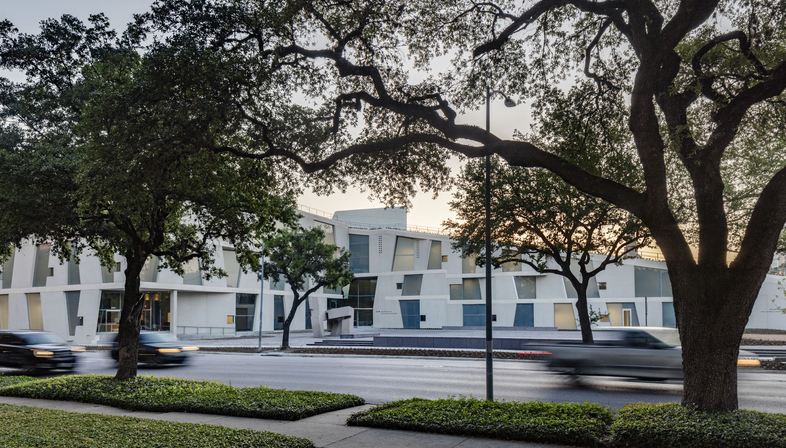 The new Glassell School of Art building designed by Steven Holl in Houston is only the last in a series of museum and exhibition projects dating back as far as the 1920s. This part of the Museum of Fine Art complex is still under construction as part of the new masterplan by Steven Holl Architects.
MFAH was the biggest cultural institution in the southwestern United States when it was founded in 1900. The new general plan covers 140,000 square metres, organised into a sort of citadel of culture and education in central Houston with its structures and landscapes.
With the intention of collecting and displaying an encyclopaedic collection ranging from antiquity to the present day, the Museum of Fine Art’s collections range from American and European art to pre-Colombian and African artefacts, from the decorative arts and design to modern art and photography. It is an open museum, built one building at a time over several decades, starting with the first building designed in 1924 by architect William Ward Watkin in the neoclassical style in vogue at the time. The museum went back to work after the Second World War, constructed new pavilions, such as Cullinan Hall and the Brown Pavilion by Ludwig Mies van der Rohe, with its continuous façades in which Mies confirmed his Rationalist orientation.
In the seventies an urgent need emerged to find a home for the museum’s own school of art, which was growing every year, and in 1979 a generous donation from industrialist Alfred Glassell Jr. permitted the construction of the Glassell School of Art, designed by Eugene Aubry and R. Nolen Willis in concrete and glass. After this came the Lillie and Hugh Roy Cullen Sculpture Garden designed by Isamo Noguchi and the Audrey Jones Beck building by Rafael Moneo, with its massive volumes contrasting with Mies van der Rohe’s architecture.
Steven Holl’s new Glassell School of Art fits into the same track of stylistic autonomy, still using concrete and glass as structural materials but strongly connotated by the American architect’s unique style. The art school has been very important since it was first opened in 1927 and has over time consolidated its role as an educational institution for the arts in the city, acquiring more and more prestige with the aid of the Core Residency Program. Steven Holl’s building combines and integrates the residential spaces for artists and critics with the Junior School, a programme for children aged 3 to 18, and the Studio School for higher education.
8700 sqm of floor space on three levels, with junior classrooms on the ground level containing numerous workshops (jewellery, ceramics, sculpture, etc.), a coffee shop, an auditorium and large exhibition spaces facing the outdoor piazza, while the advanced courses of the Studio School and the offices are located on the second and third floors. The structure is the product of alternation of big prefabricated concrete slabs with opaque glass, with angles of inclination alluding to the walls built by Isamo Noguchi in his sculpture garden. Each form complements the others nearby, creating a dynamism between the parts, an apparent dance with a horizontal texture along the stringcourses: a scheme that allows diffuse natural light to come in and illuminate practical teaching activities. The L-shaped floor plan creates an open plaza in continuity with the Lillie and Hugh Roy Cullen Sculpture Garden, among works by Louise Bourgeois, Henri Matisse, Auguste Rodin and Anish Kapoor. The route then goes back to Steven Holl’s architecture, going up to his green roof, built on a slope to contain an amphitheatre. This massive, imposing structure dissolves in the centre of the L, where the entrance door almost seems to collapse inwards, twisting its shape to involve the three floors up to the roof. By means of this deconstructive effect, Holl creates the space for a new amphitheatre, underlining the importance we now attribute to sharing in artistic practice. 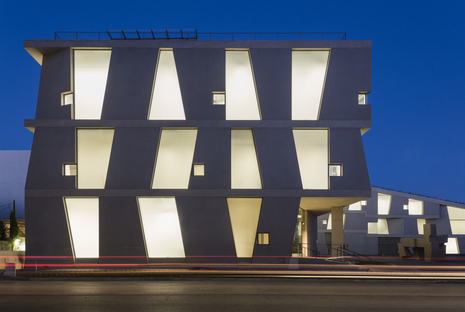 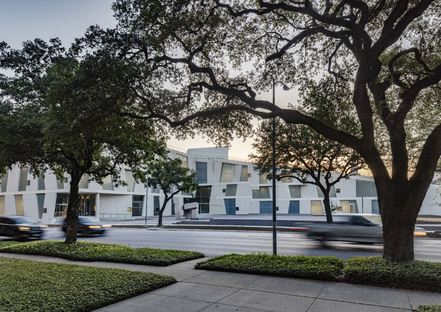 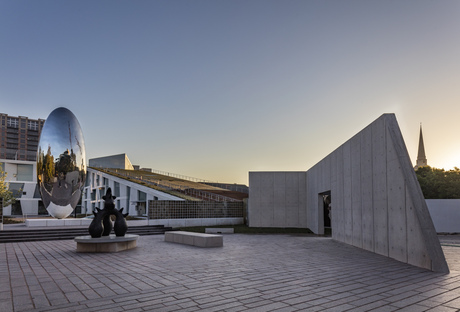 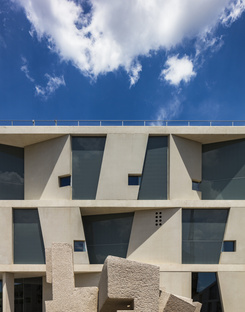 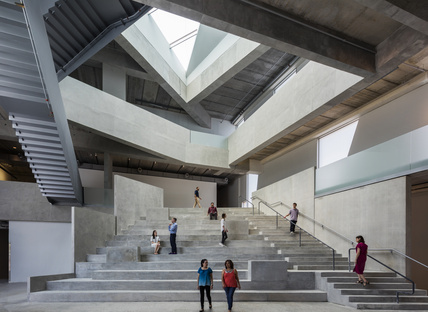 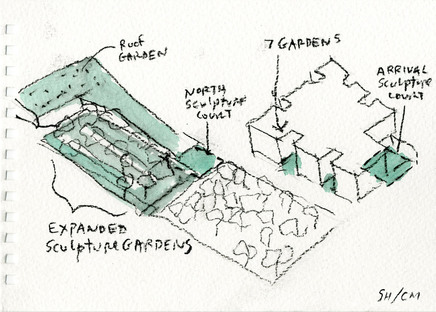 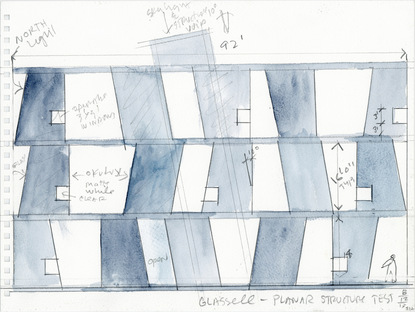 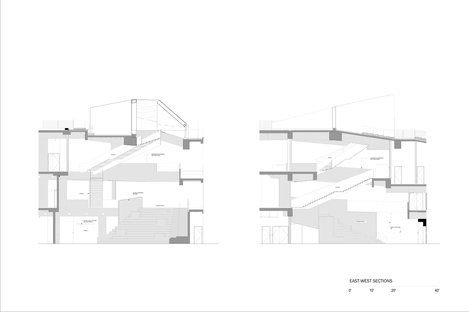 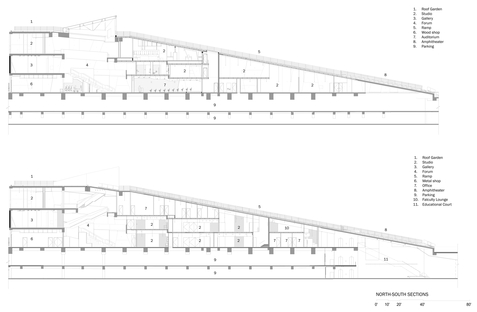 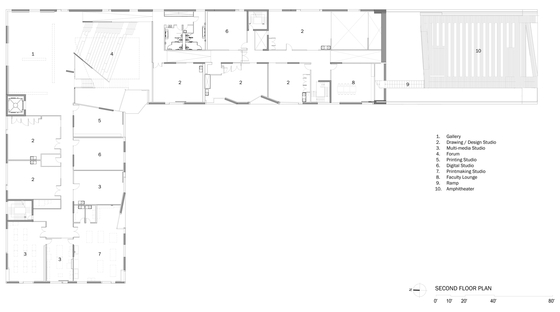 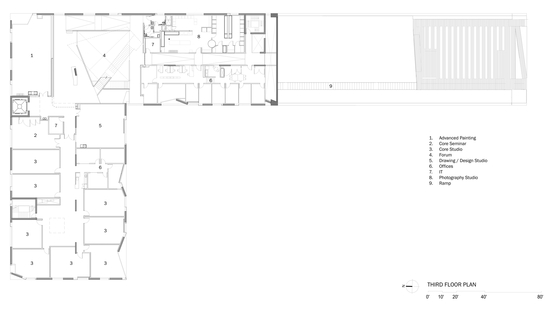