The new Daniel Patrick Moynihan Train Hall, the new train hall at the Pennsylvania Station, in New York, opened its doors to the public on January 1, 2021. The project was designed by architecture firm Skidmore, Owings & Merrill (SOM) inside the historic James A. Farley Post Office Building. A monumental and important civic project that transforms the way millions of people interact with one of the world’s largest cities, reimagining the travel experience and restoring the grandeur of a historic complex. 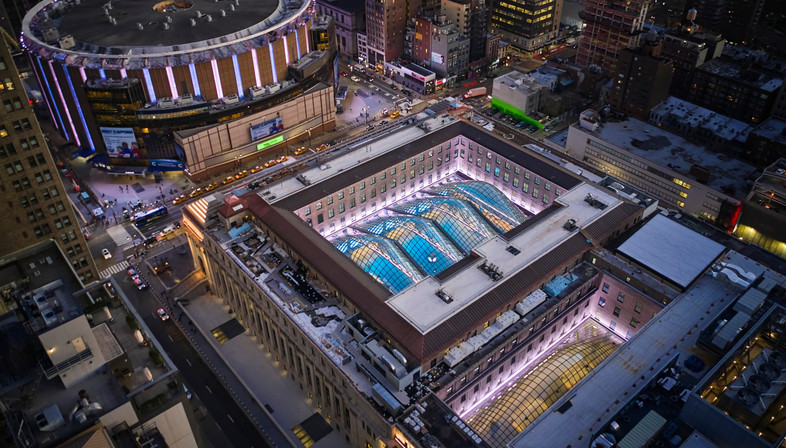 In New York the new year began in a very special way, with the inauguration of the renovated Daniel Patrick Moynihan Train Hall. The new train hall was designed by architecture firm Skidmore, Owings & Merrill (SOM) and named after the United States senator who first commissioned the project in the 1990s. The project made it possible to enlarge the total space of the existing hall by 50% and to evoke the grandeur of a centuries-old building, the James A. Farley Post Office Building.
The historic complex, situated between Eighth and Ninth Avenues and West 31st and 33rd Streets, will become an important transportation hub and will offer a new experience to the thousands of commuters walking through the station every day, interacting with one of the world’s largest cities. The first and most important innovative aspect of the design is the light, which after 50 years makes its way back to Penn Station’s concourses. An element that also adds symbolic value to the project because, as underlined by SOM partner Colin Koop, this is an incredibly important moment in the history of New York City.
The original Pennsylvania Station was designed by architecture firm McKim, Mead & White in 1910. The building was considered a masterpiece of the Beaux-Arts style, allowing direct arrival to New York City for travellers from the south for the first time.
Following World War II, due to the decrease in passenger traffic, the station gradually lost its importance. Over the years, various demolitions and renovations of some of the buildings changed the spaces, transforming them into the modern Penn Station, with only the underground concourses and the platforms remaining from the original building. In the last 50 years, thanks to a progressive increase in passenger traffic, which has gone from 200,000 to over 600,000 units per day, the need for major renovations matured. A development that found favourable conditions in the gradual underuse of another building, also designed by McKim, Mead & White in 1913: the Farley Post Office Building. This historic building presented itself as the perfect place for the new railway station, both for its position (it is located above the Penn Station tracks), and for a number of architectural elements, such as the grand staircase and the colonnade, which echoed the firm’s design for the historic station.
The new train hall became the heart of the entire transformation. The hall was built in the 31,000-square-foot former mail sorting room, roofed by a dramatic skylight that traverses the entire space, recalling the original Penn Station dating back to 1910. In order to create and support the new roof, composed of four catenary vaults made of more than 500 glass and steel panels, SOM’s architects exposed the building’s three massive steel trusses. The structure became a key element of the new project, stressing the neoclassical design of the original space. The project includes another element that evokes the atmosphere of the historic station: the new clock designed by Pennoyer Architects, situated on the middle truss and inspired by the old analogue clocks that typically dominated train halls. 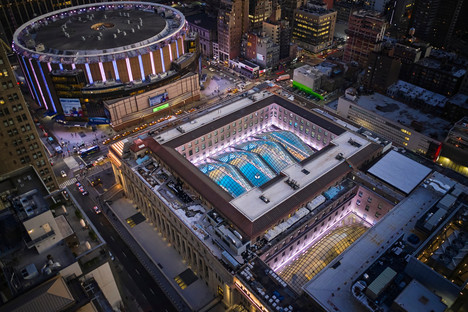 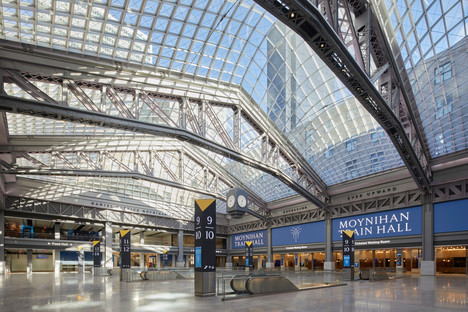 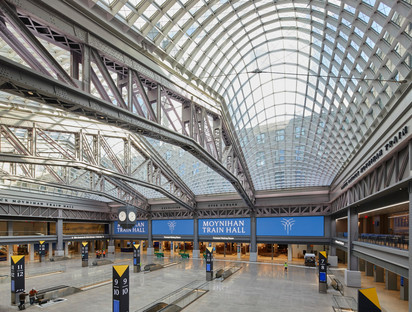 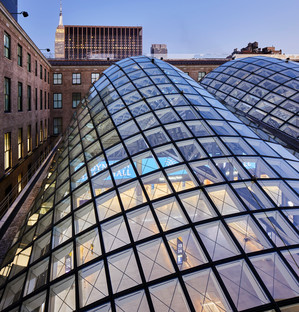 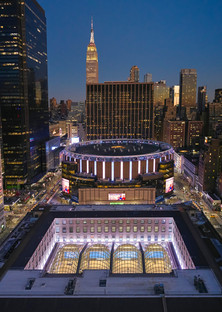 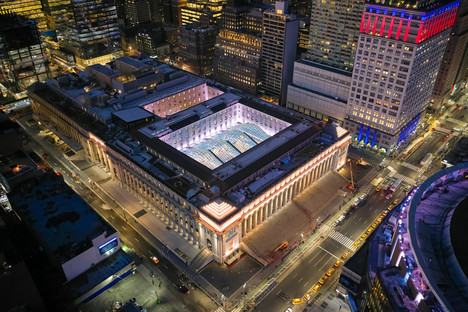 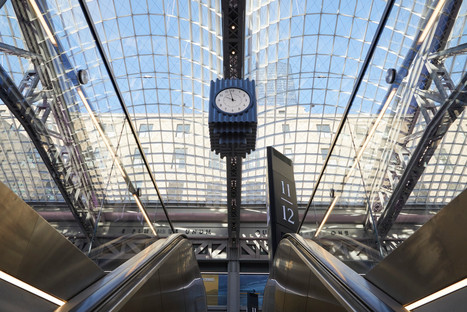