Snøhetta designed the new central headquarters of the Le Monde group in the 13th arrondissement of Paris. The recently completed complex brings together the French publishing group’s 1,600 employees under a single roof, which is semi-transparent to evoke newspaper typesetting with moveable type. 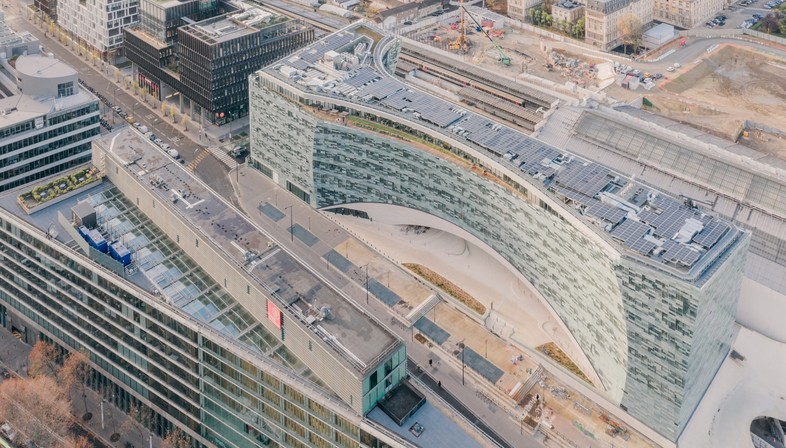 The headquarters of Le Monde publishing group have been completed in the 13th arrondissement of Paris. Architectural studio Snøhetta designed the new office building on a vast scale, more than 20,000 square metres, to allow the editorial staff of six publications (Le Monde, Courrier international, Télérama, La Vie, HuffPost and L'Obs) and all 1,600 employees of the French publishing group to work under the same roof even while maintaining their independence.
Architecture interprets the intentions of the client, a leading French publishing group, reflecting its participation in the active life of the city and its openness toward the public in the building’s structure. The new Le Monde headquarters fit into their urban surroundings with a big public plaza open to all and an all-glass façade, two elements symbolising free, transparent information. A bold, high-impact gesture, especially because the design of the building was approved only days after the attack on the offices of French magazine Charlie Hebdo. At a time when fear and uncertainty seem to rule the day, Le Monde does not build walls but bridges, with a construction encouraging openness and interaction between the world of public and private, outside and inside.

Built adjacent to the Gare d’Austerlitz railway station near the Jardin des Plantes, the new headquarters of the Le Monde Group include a number of “free-spaces”, hybrid places that can serve both Group employees and the general public, allowing the building to fulfil its role as a gateway to the new Paris Rive Gauche district. The public area is partially landscaped and furnished with custom-designed concrete benches, maintaining continuity with the flooring; use of the same material for the intrados of the arch gives the public place a sense of continuity and consistency. Shops bring life to the neighbourhood, while bicycle parking spots under the arch encourage the Group’s employees to use an ecological form of mobility.
The concave form of the complex adds motion to the 80-metre-long façade on Avenue Pierre-Mendès-France and arches over the public plaza in its central part, anchored on both sides with two cantilevered seven-storey volumes rising out of the ground, held together by a complex steel weight-bearing structure: a technical solution that overcomes the many limitations to which the site was subject. It was not possible to construct a weight-bearing structure anchored to the ground in the middle of the site, but only to use the foundations already constructed at either side.
The main façade extending along Avenue Pierre-Mendès-France has a total surface area of 10,000 square metres and is composed of more than 20,000 pixeled glass elements that create effects of transparency which vary with the time of day and the seasons; elements differing in opacity, arranged according to a complex scheme evoking the moveable type of a newspaper printing press.
On December 11, 2020 the building was awarded the Grands Prix SIMI, an important French real estate award. 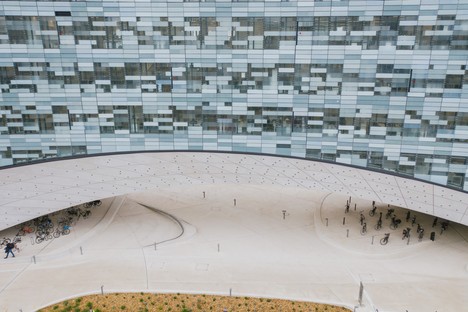 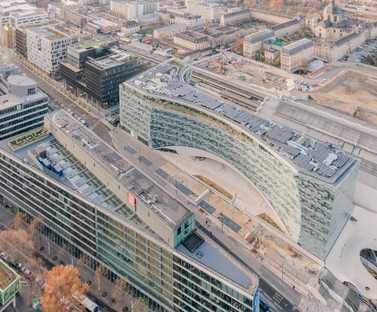 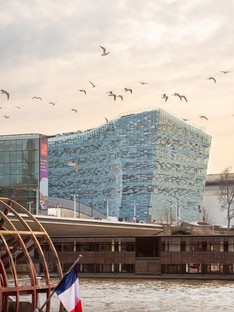 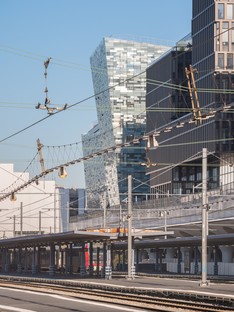 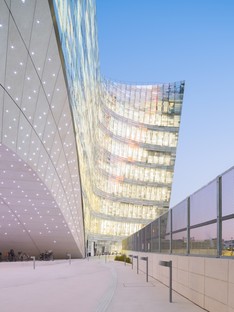 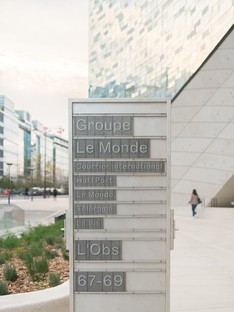 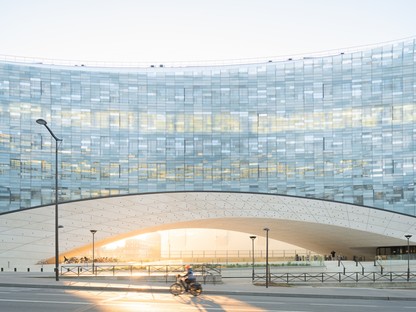 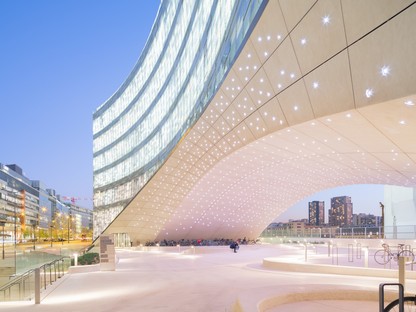 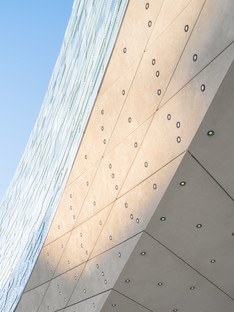 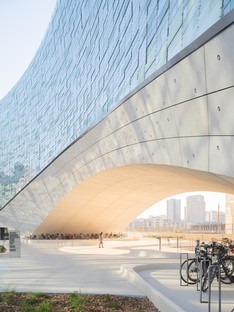 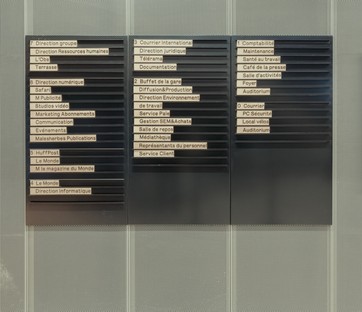 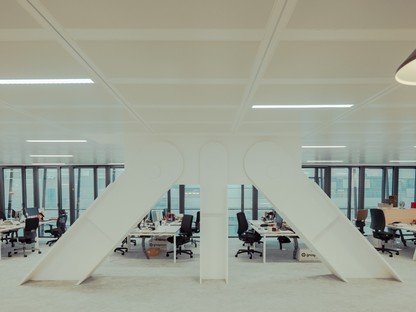 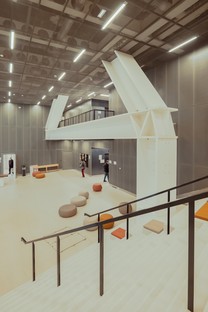 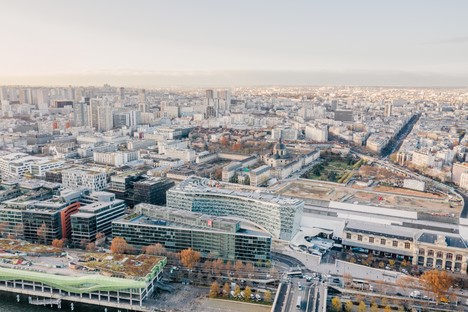 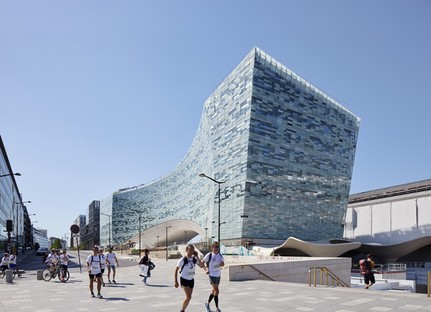 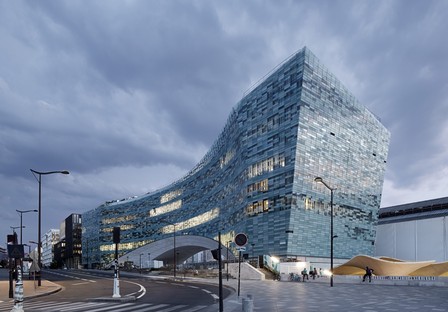 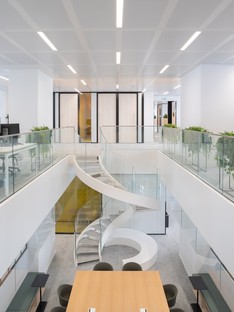 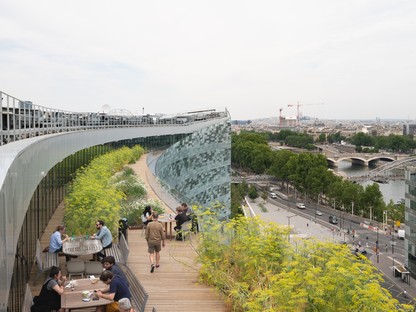 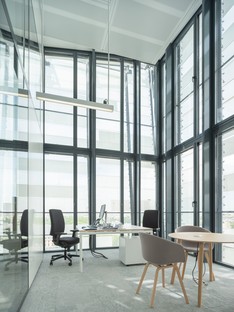