The new Kenitra Station designed by Silvio d'Ascia Architecture in partnership with Omar Kobbité Architects has been described as a treasure chest. The project is part of the first high-speed railway line in Morocco, and indeed in Africa, linking the Mediterranean with the Atlantic via Morocco’s most important cities. 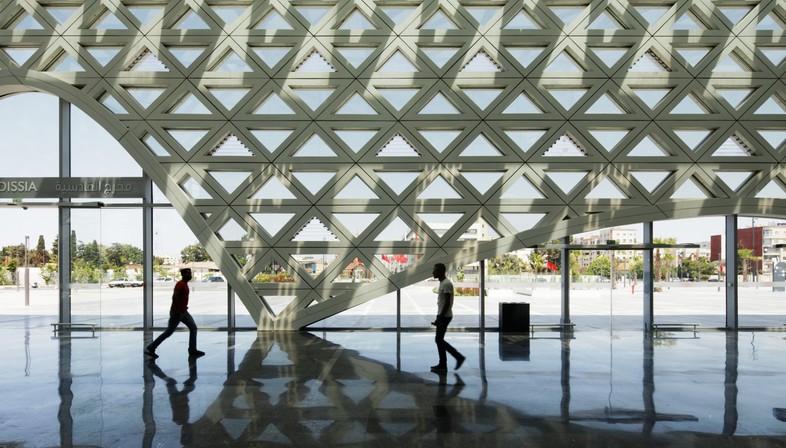 Morocco is working on a major infrastructure development project involving modernisation of the railway stations in its principal cities and construction of new stations for the Al-Boraq or "winged horse" high-speed railway line connecting the Mediterranean with the Atlantic Ocean. The new railway line links Tangiers, and therefore the major port of Tangers-Med, with Casablanca, the country’s financial capital, and will in the future be extended as far as Agadir. This is a true strong point of the general programme King Mohammed VI is implementing to boost the African country’s role as a bridge to Europe.
The "winged horse" Al-Boraq is the first high-speed railway line not only in Morocco but anywhere in Africa, with key stations in Rabat, Casablanca, Kenitra and Tangiers. The station in Kenitra is the last to be completed, a precious treasure chest designed by Silvio d'Ascia Architecture in partnership with Omar Kobbité Architects. 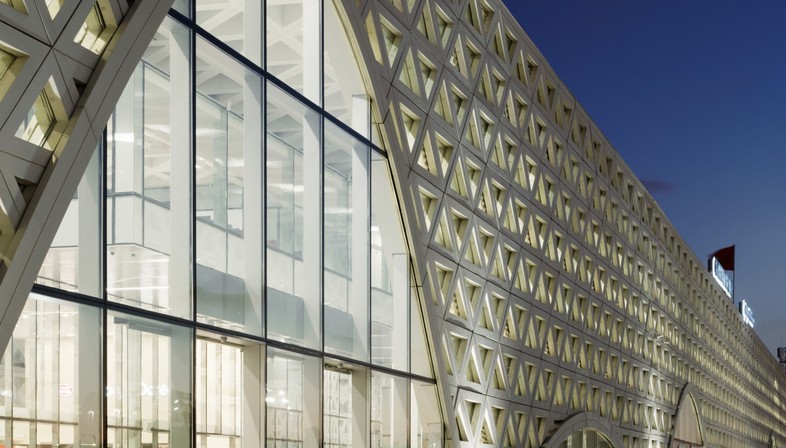 Kenitra Station looks like a treasure chest sitting in the middle of the city, offering a new interpretation of traditional Moroccan architecture. The architects enlarge on an urban scale an element typical of traditional Arabian architecture, the mashrabiya, a grid placed in front of windows to promote natural ventilation of indoor spaces while sheltering them from indiscrete eyes.
As well as serving as an intermodal hub, the station is designed to be an important public space in the life of the city. This was the principal challenge faced by architect Silvio d'Ascia and the members of his team: creating a new connection between the historic and new cities to replace the old underground passageway used in the past. This result is achieved with construction of an urban bridge crossing above the railway line. The bridge links not only the city’s two parts but the wharfs and the railway station, while also providing an urban space offering shops and services for citizens and passengers. In this way the station serves as a direct link between the new parts of the city, such as the university and the university hospital to the south, with the historic city centre in the north. The station has two entrances, north and south, serving the two parts of the city; on the northern side, facing the old city centre, is a public space open to the public, organised into three blocks according to function and subdivided over three levels, plus an underground parking lot below the plaza.
The big urban mashrabiya on the station’s façade is made up of 800 ultra-high performing triangular fibre-reinforced concrete blocks, taking the form of eight imposing arches of different shapes on the northern side of the big square. The triangular motif of the mashrabiya is inspired by the geometric shapes typical of Islamic architecture, a porous skin that filters daylight and air, mitigating indoor temperatures as compared to the outdoors and establishing the perfect balance of light, shade and transparency. In this way the station manages to fulfil the important purpose of providing a place for social integration and human interaction, a meeting-place for everyone to use, whether or not they need to take a train, according to the intentions of architect Silvio D'Ascia. 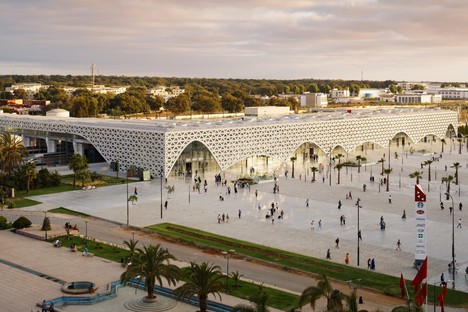 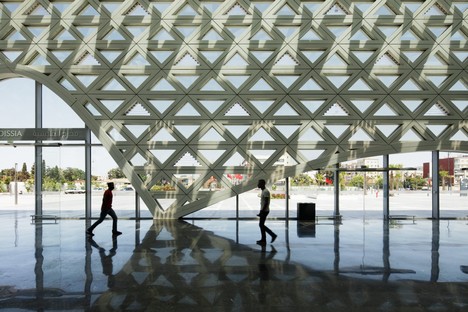 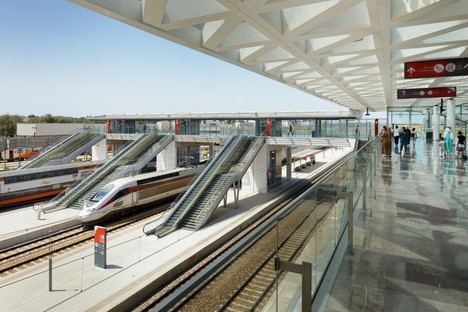 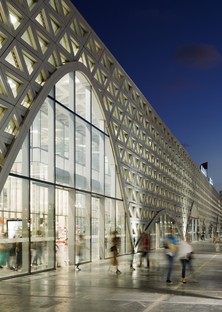 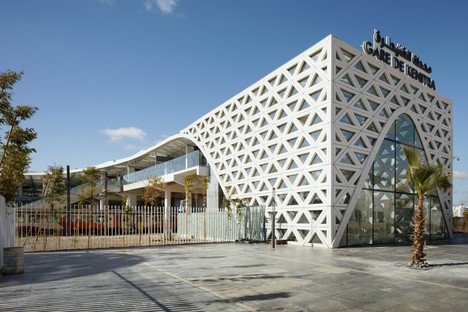 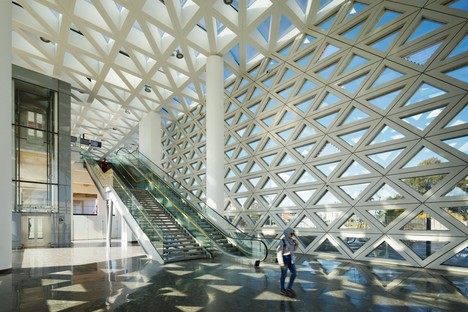 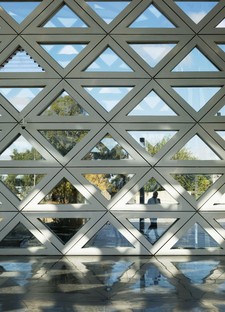 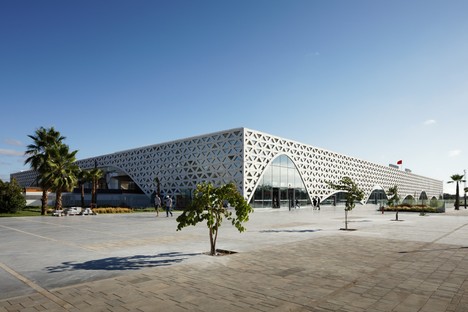 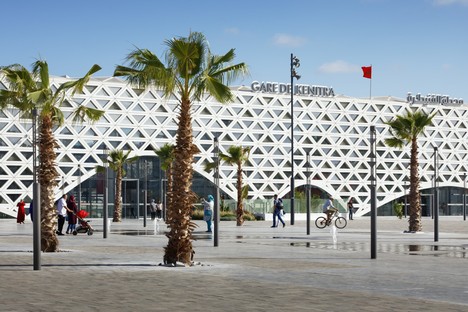 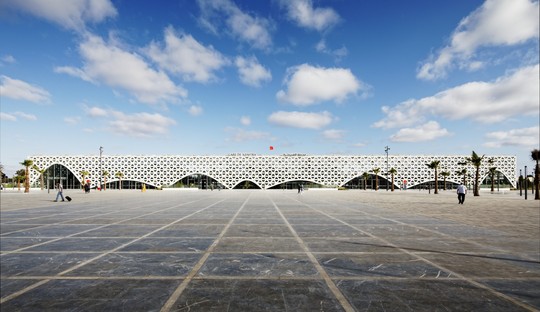 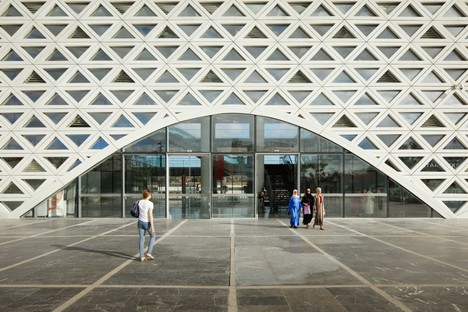 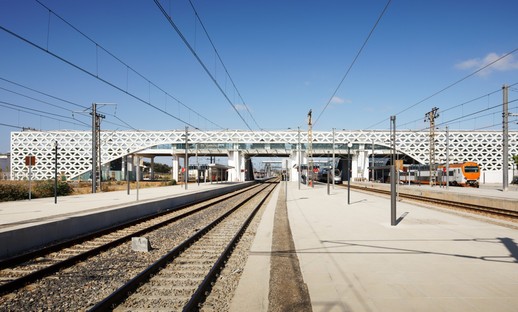 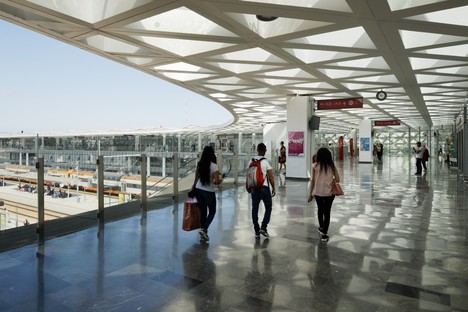 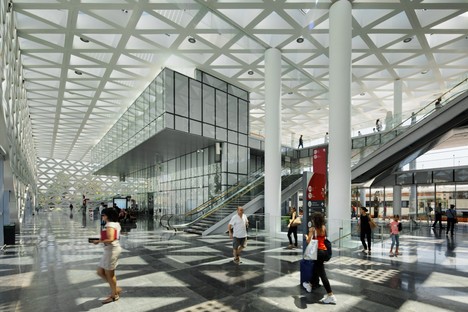 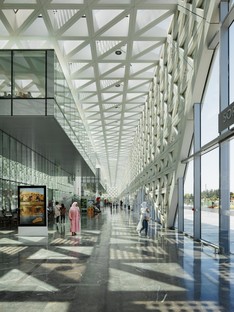 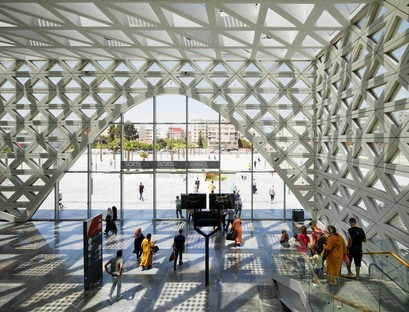 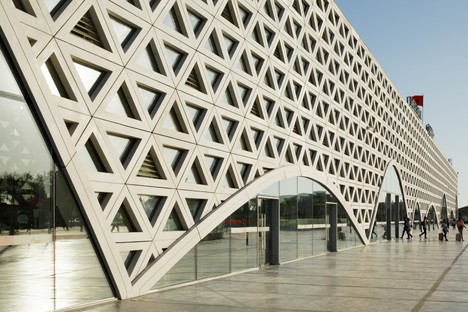 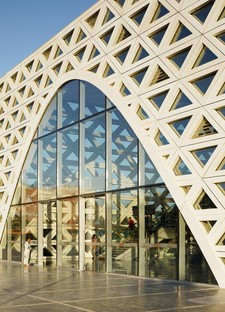 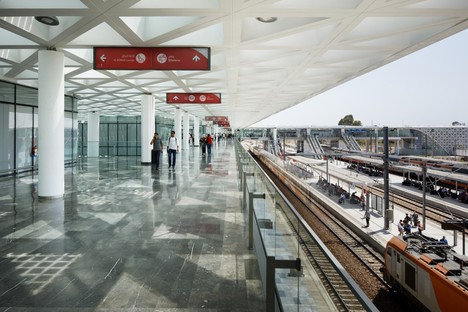