On the campus of the Université Paris Nanterre, the new building of the “Bibliothèque de Documentation Internationale Contemporaine” designed by Atelier Bruno Gaudin Architectes, has been completed. The building, constructed at the entrance to the university campus, houses the library, the archive centre, the museum and the offices of La Contemporaine. This is a major French institution, a point of reference in the field of humanities and social sciences studies that preserves and collects documents and objects relating to the contemporary history of the 20th and 21st centuries. La Contemporaine is a French institution and an important reference point in the field of humanities and social sciences, thanks to its collection of more than 4.5 million documents, paintings, newspapers, photographs, audiovisuals, posters and other objects dedicated to the history of the 20th and 21st centuries.
This immense collection began with the gift in 1917 of a couple of Parisian industrialists, Louise and Henri Leblanc, who had amassed every possible document on the First World War and its causes, and who linked their donation to the creation of a library-museum dedicated to the war. The University of Paris-Nanterre responded to this request by commissioning the Atelier Bruno Gaudin Architectes to create an “atelier de l'histoire”, a place in which to understand how history is written and how to understand the history of the present from the documents of the past.

The lot chosen for the project is small and atypically triangular in shape, but it is a highly public place, located opposite the exit of the RER railway station and on the southwest side of the university campus. This position confirms the building's vocation to become a documentary and educational centre for a broad public, not just researchers.
In the planimetric organisation of the project, the architects were guided by the urban geometry of the lot, using its orientation to design distinct spaces and volumes for the different functions. The western front, facing the university, is the one where most of the services are distributed, and it comes to an end to the south with the permanent exhibition area, which in turn becomes the hinge between the two street fronts. On the south side there is a large portico that beckons the public to enter and leads them to the entrance hall in the centre of the complex.
The highest part of the complex, which the architects describe as a “wind tower”, is located on this predominantly horizontal front. Against a backdrop of imposing buildings, this tower restores the complex's urban scale and becomes a landmark, thanks to its colonnade which, when illuminated by the sun's rays, creates plays of light and shadow on the façade.

In a central position, in relation to the shape of the plot, is the entrance hall which, with its vertical structure, becomes the point of transversal connection between all the functions and the one which allows us to understand at a glance the spatial layout of the library-museum.
On the outside, the entire project is metrically governed by the local grey brick, 37 mm high, a module that determines the size of each architectural element of the façade. Internally, the structure plays a key role in making the multifunctional character of the building even more evident. The architects opted for a polymorphous structure and played with natural and artificial light to imbue each room with its own specificity and poetry. For the reading room, for example, which is illuminated by the windows on the street side, they have used large white concrete arches whose size gives a monumental feel to the space. 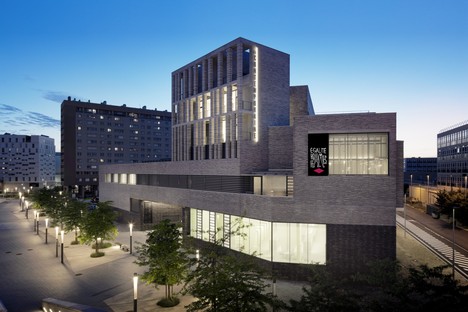 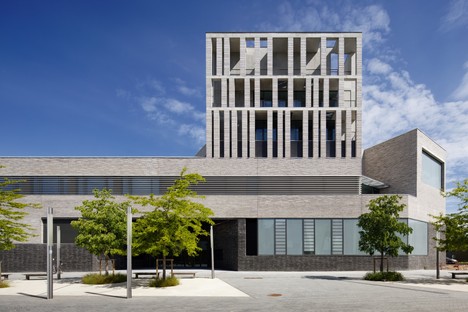 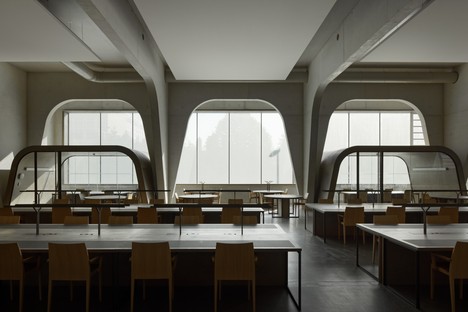 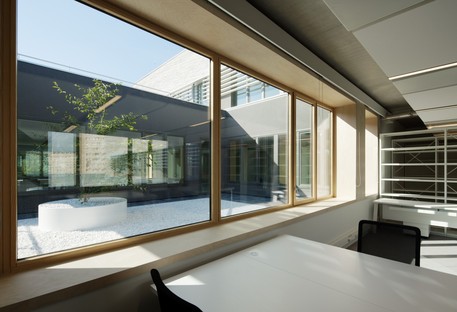 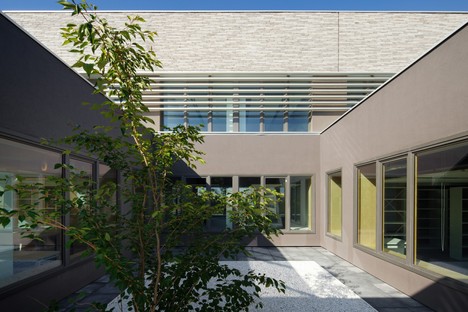 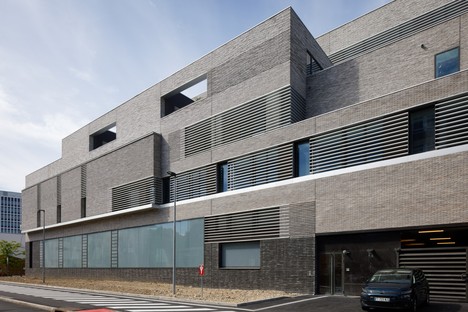 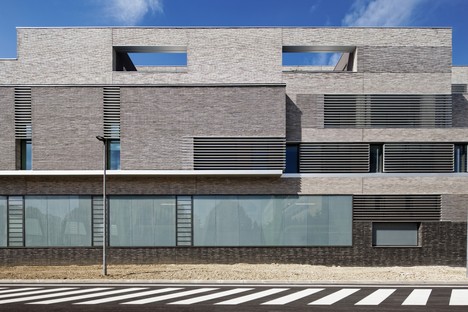 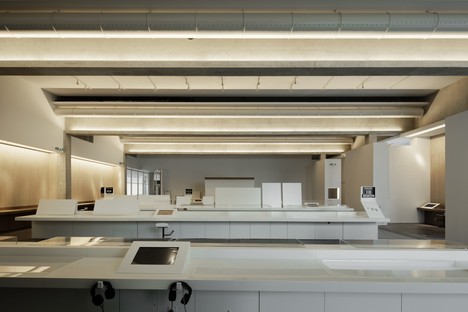 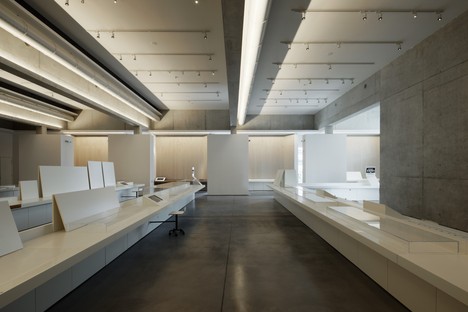 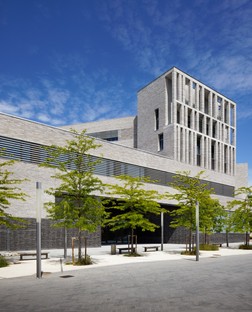 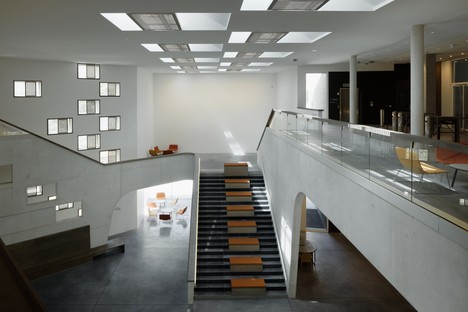 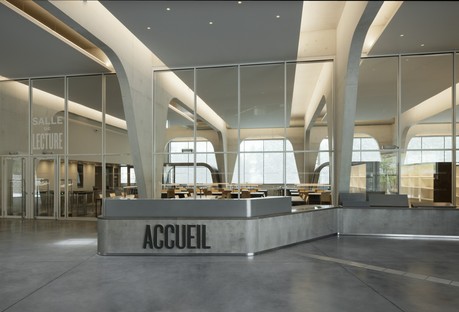 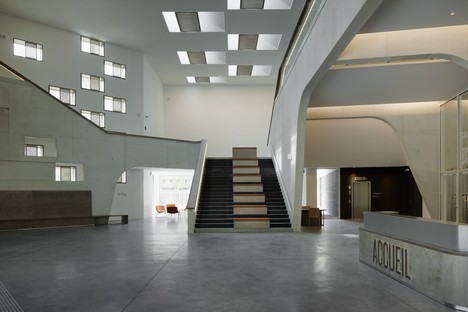 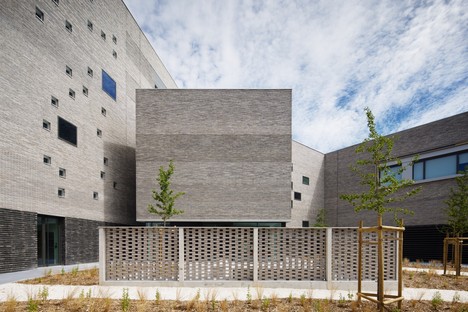 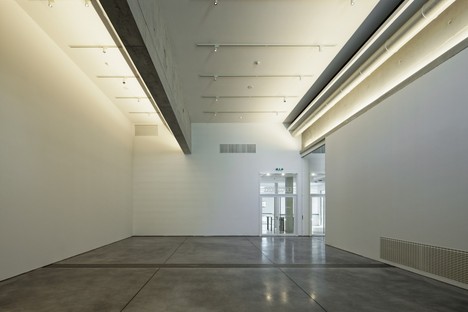 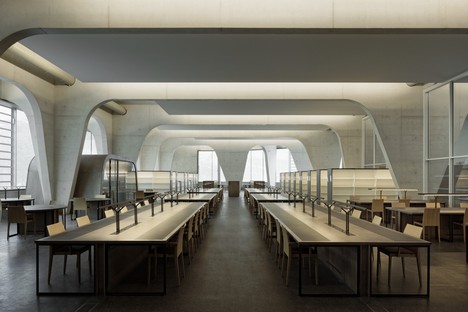 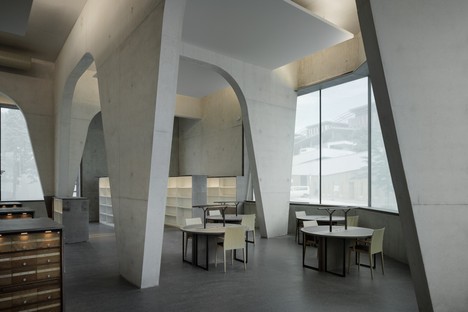 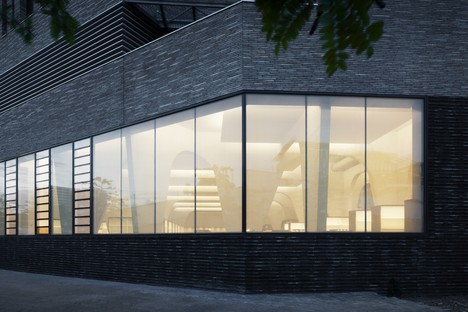 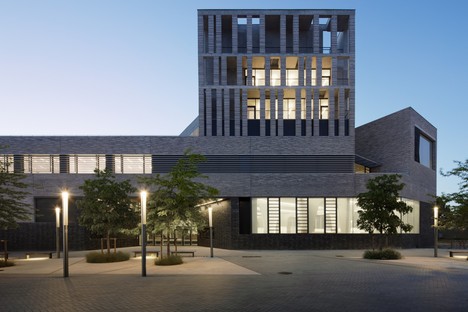 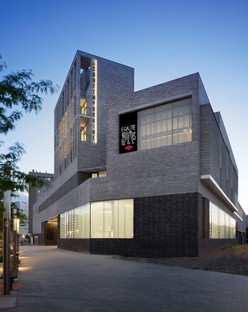 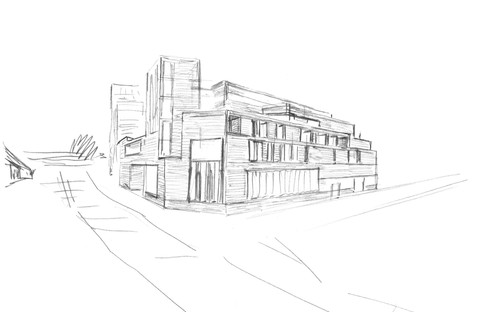 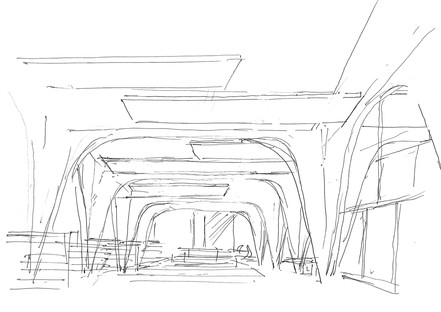