Stuttgart-based firm SeArch has been commissioned by the city government to design a children’s daycare centre to replace the old complex in the Untertürkheim neighbourhood, which is no longer functional. For Stefanie and Stephan Eberding, the references are the Art Nouveau style of the adjacent school building and the back garden. 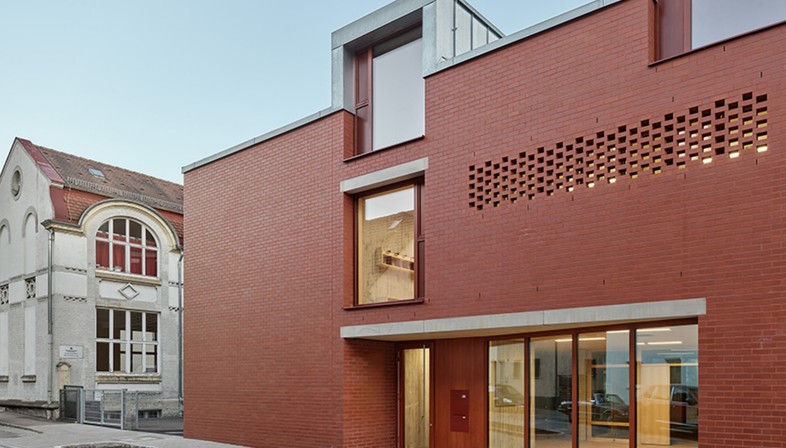 In the mainly residential area of Untertürkheim, Stuttgart, new space and safety requirements mean that significant work is to be carried out on the buildings of the daycare centre for children located on Ötztaler Straße. The City has called upon SeArch Architekten, headed up by Stefanie and Stephan Eberding, to draw up a plan for the future of the existing structures in order to make them suitable for the increased number of children that the centre will soon have to accommodate.
Ötztaler Straße is a long road that runs through Untertürkheim, eventually leading to one of its vineyard-covered hills. The road was overlooked by three structures: the old preschooler complex, the site of the Wilhelm School with the new, low-rise kindergarten building, and finally, the monumental Art Nouveau architecture of another school building whose main entrance is located on the perpendicular Nebelhornstraße. Surrounding the site is a dense, heterogeneous residential area which sits on a gentle slope, interspersed with fields planted with local grape varieties; as such, it could in fact be described as a “village”. What marks it out is its minute scale, low-traffic streets, and regionalistic architecture, which is characterised by bold red rooftops.
The old educational complex consisted of a low concrete pavilion with a flat roof, built in the 1970s, and a two-storey main building with a hipped roof and a turret, built in 1850. The decision to expand these facilities to accommodate more children was deemed impractical and inadvisable in terms of both building regulations and the size of the property. As such, with modernisation works considered unjustifiable, the City finally decided to demolish the buildings and build a new facility in its place, with particular emphasis on its relationship with the internal garden, which is large and boasts tall, centuries-old trees.
The choices made by the architects at this point suggest that the new building will not blend in with the long-established image of the architectural landscape mentioned previously; instead, they are developing a language that offers both continuity and variation with the centre’s surroundings in the form of original solutions.
The two volumes from different eras that have been demolished have not been taken as a model; indeed, the new daycare centre draws much of its inspiration from the building on Nebelhornstraße. The new building bridges the gap present on Ötztaler Straße by replicating the scale of the Art Nouveau building, which is located on the corner: indeed, the building’s two and a half storeys are topped with a gable roof, and the skylights - which lay flush with the façade - echo the tall arched windows of the Art Nouveau façade in terms of size. However, in contrast with the sinuous, organically-shaped décor, the new façade uses a geometric language which constitutes the stylistic signature of the entire composition, whilst the red of the old roof’s shingles is transposed to the new clinker-clad façades. Overall, the different features of the two buildings establish a certain continuity, forming a monumental corner - which underlines their public function - within the smaller, more compact residential fabric around them.
Whilst the main façade remains more closed, despite the large windows, with the striking red of the brick prevailing, the rear side which overlooks the park is intended to be a great deal more open. The entrance on Ötztaler Straße leads to a multifunctional area, which extends down to the vast window overlooking the courtyard, offering an initial view of it. A corridor located to the side leads to the two rooms especially for the care of the youngest children at the centre, the under-threes. The first floor is home to two more age groups, with adjacent rooms arranged along the garden façade, which also has a large balcony. On the top floor are the rooms for the last two age groups. Particular attention has been paid to the amount of natural light entering the children’s rooms: the skylights in the loft provide a bright environment, creating a one-of-a-kind play area with a special view over the city.
On the ground floor, behind a series of glass doors, there will be a dining room with a kitchen, which can be used as a reception room for both school events and external ones. The façade facing the garden, meanwhile, has been designed as a filter space - a transitional area between inside and outside that spans all three floors, bathed in sunlight and ideal for use in the colder months.
From the materials - such as natural wood, glass and concrete - to the clean lines, everything strongly suggests that the daycare centre is a new place altogether, cutting its ties with the past and offering more comfortable, airy spaces that are better suited to a more modern approach to education. Each room features sweeping views which establish a constant dialogue with the urban surroundings; the light enters both directly and - for the rooms on the top floor - indirectly, thanks to the skylight at the peak of the roof. Brick has also been used in the form of brises-soleil to offer shade to certain spaces without blocking the entrance of natural light.
Whilst bold, the intervention is also carefully measured, delicately inserted into a historical context whose image its residents are still very much attached to. 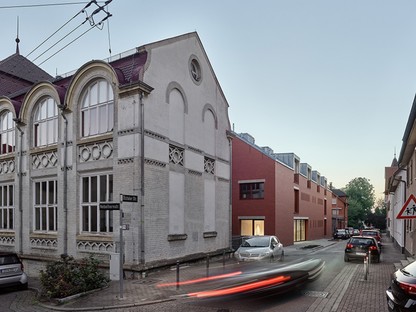 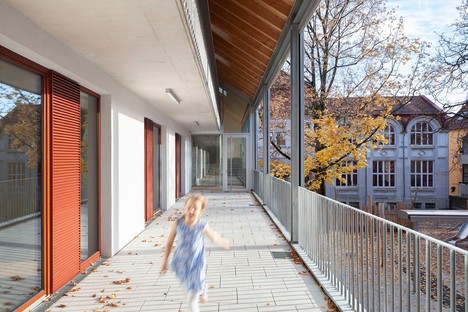 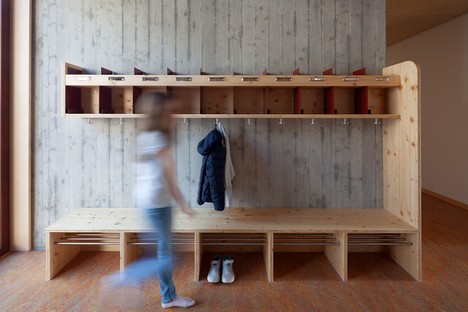 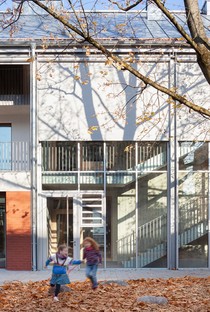 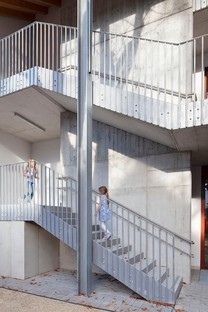 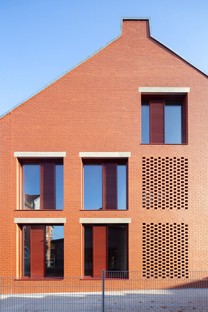 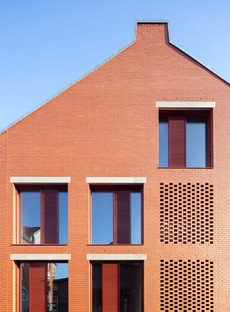 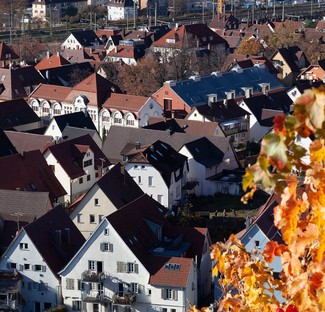 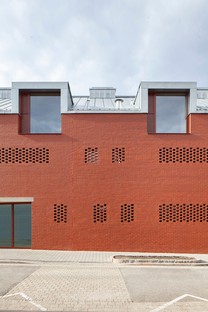 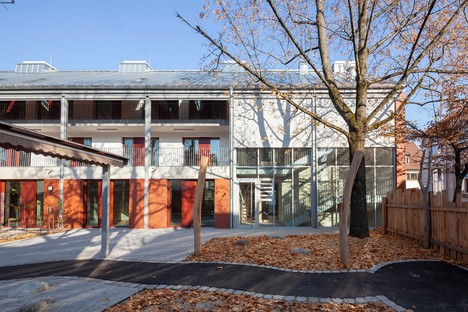 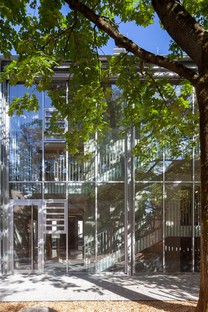 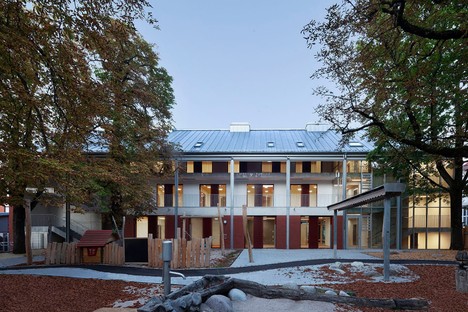 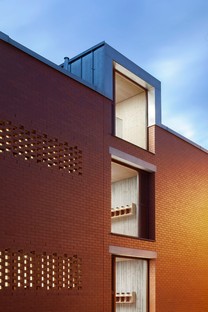 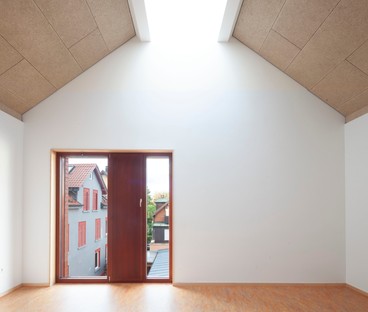 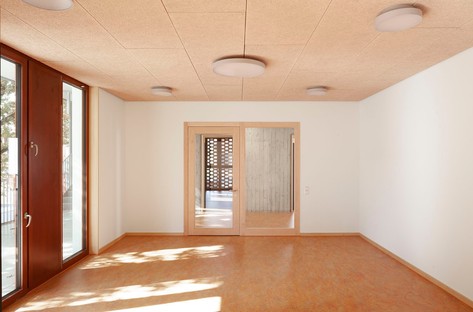 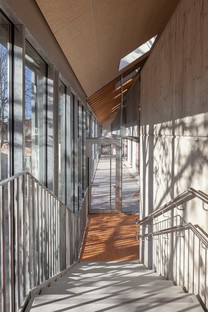 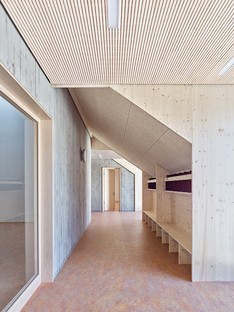 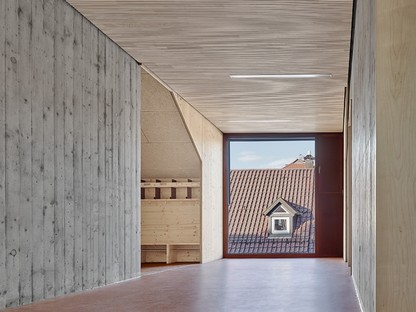 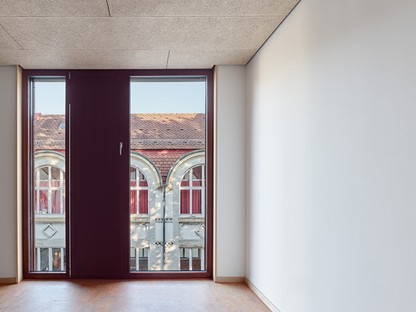 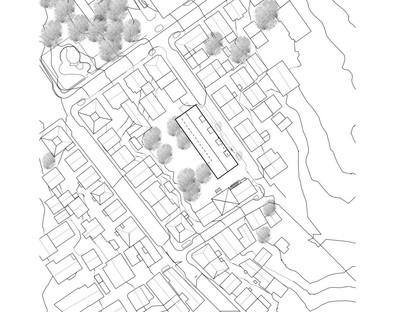 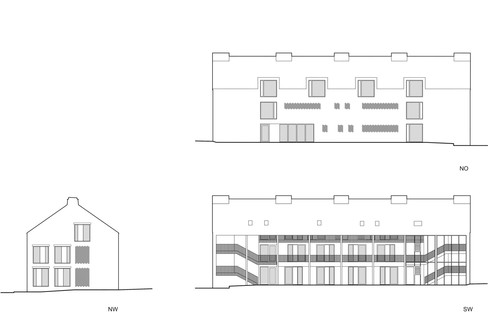 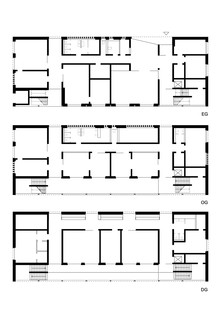