The Wagenhallen have become one of Stutgart’s most important event venues. Built as a locomotive warehouse in the late nineteenth century, they have been expanded and transformed over the years, and have now been renovated by Atelier Brückner as a cultural centre housing numerous artists’ studios. 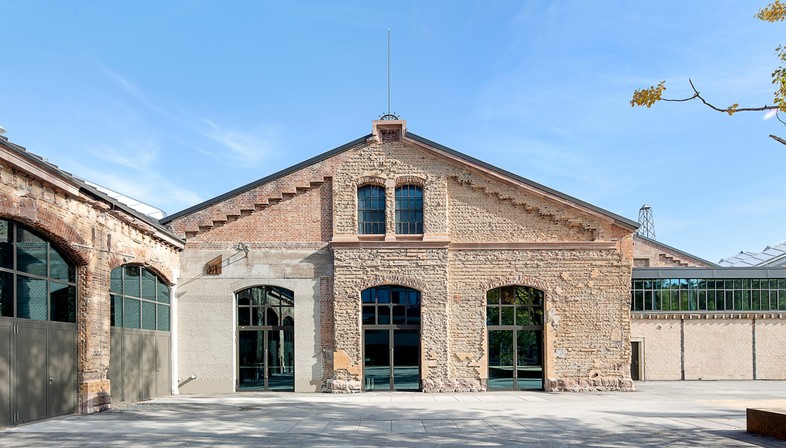 Inaugurated in an official ceremony in October 2018, Stuttgart’s Wagenhallen have become a cultural centre containing spaces for events, artists’ studios, a school of dance and a restaurant located in the city’s former locomotive warehouse, built in the late nineteenth century. In 2015 the City of Stuttgart commissioned German studio Atelier Brückner to renovate the former locomotive storage warehouse, rented to Kulturbetrieb Wagenhallen GmbH & Co. KG for cultural use and occupied by artists’ studios for more than ten years.
Hangar-like constructions dating back to 1895, the Wagenhallen were built to store railway cars and, later, buses on more than 13,000 square metres in the northern part of Stuttgart. The main structure of brick pavilions with gabled roofs has been repeatedly transformed over the years, also as a result of war damage. It became City property in 2003, but was used only to house temporary activities.
The big, tall spaces that make the Wagenhallen particularly suitable for performances and major events had become a popular cultural centre in this outlying district, but the structure could not be considered legally approved in terms of static engineering and fire safety, requiring a complete renovation project. This also offered an opportunity to confirm the building’s new use, in a project with the twin goals of bringing to light the buildings’ original walls and industrial character and offering long-term prospects for the artists working in the centre.
On the basis of this approach, Atelier Brückner preserved the greater part of the old buildings, restoring their historic brick façades and steel roof beams. The new roof is made with lighter metal panels, alternating with big skylights reconstructed on the basis of historic drawings to provide adequate lighting for art and performance spaces. The windows have been redesigned with black steel frames to create a clear contrast between the warm original hues and the contemporary additions. On the basis of the same philosophy, wherever walls had to be knocked down for static reasons, new façades were added which imitate the lowered arches and brickwork of the original building. While the oldest walls are made of red or ochre clinker bricks, depending on the time of construction, the new additions are made of whitened brick, clearly revealing the layering of the building at different times in its history.
In spatial terms, the end buildings to the east and west have been partly demolished, and new functions have been designed which serve as gateways to the central pavilions from either side of the complex. A new space has been created to the southwest, a treed plaza providing an entrance and an outdoor area for events, while a large portion of the building to the northeast has been demolished to construct a new building to contain studios on the same scale as the hangars.
The multicoloured reclaimed bricks, big windows and black steel window frames ensure that this two-storey expansion is consistent with the historic construction, but clearly identifiable as contemporary. A grassy lane and a second plaza in front of the school of dance in the old hangars to the east mark this fascinating break between past and present.
After the renovation, the Wagenhallen have three parts: a 4050 square-metre event space to the southwest, a central part containing workshops which spill over into the new building to the east (a total of 9500 square metres) and the 450 square-metre school of dance. To adapt the building to today’s fire safety standards, a new fire wall has been built between the studios and the event space.
To make the most of the hangar’s ten-metre height, it is divided into studios with freestanding structures, separate and independent from the walls: with the idea of hosting performances and major events, these volumes are even designed to be taken outside on the warehouse’s old train tracks.
The architectural structure is still fully visible, underlining its industrial nature by leaving the new pipes intentionally in view and restoring the old installations and technical signals uncovered on the walls.
Creation of green plazas not only allows the centre to host outdoor events and provide a public attraction, but establishes interaction with the industrial surroundings of the Wagenhallen. As if to drive home the point that art should not be considered an isolated experience limited to a single point in time, but guided by the life of the city and, in turn, capable of influencing it. 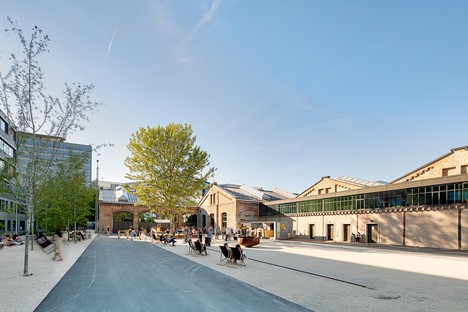 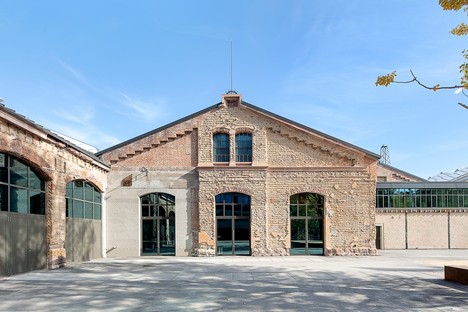 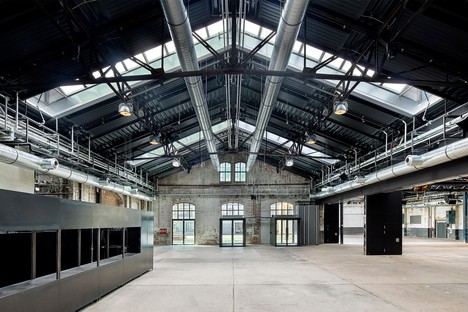 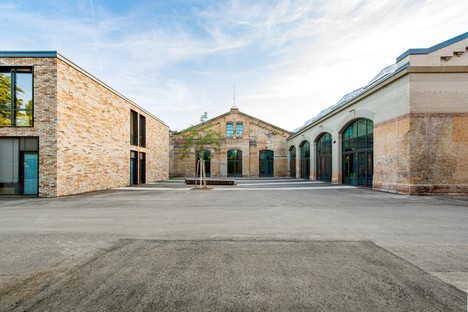 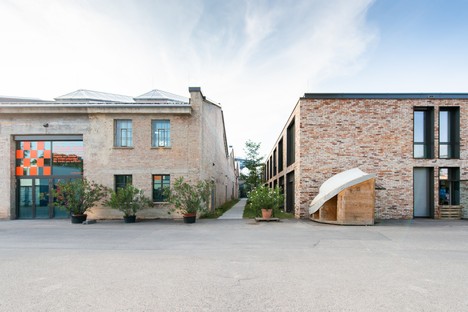 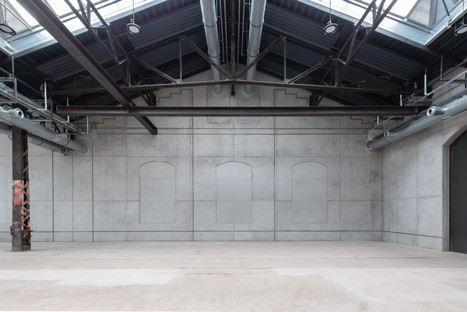 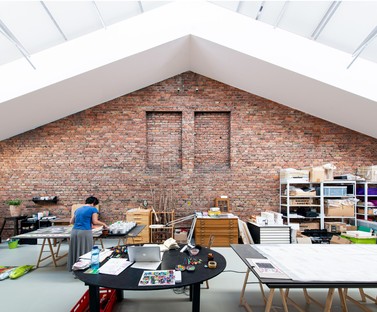 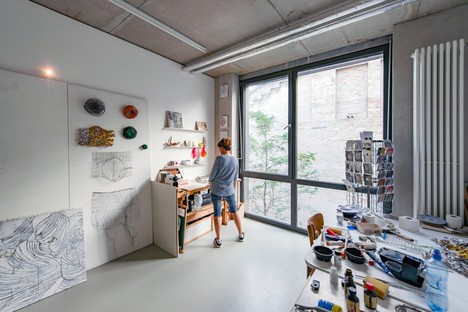 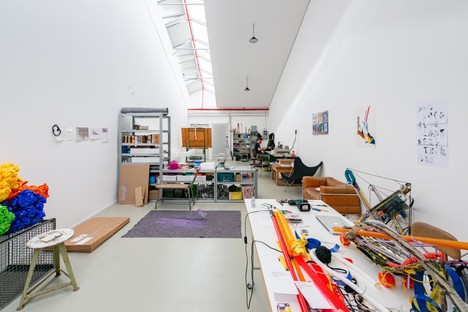 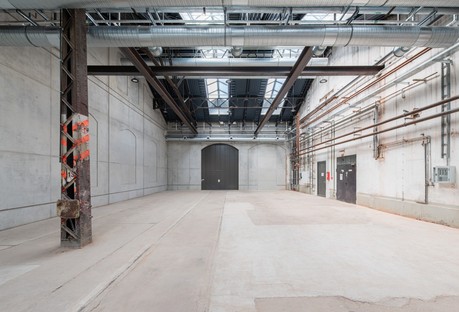 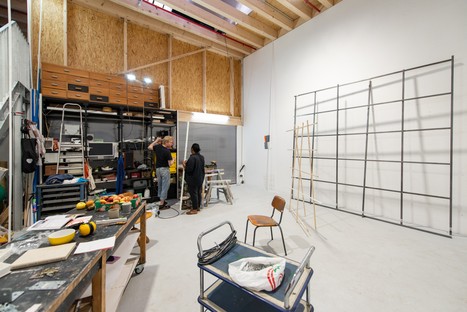 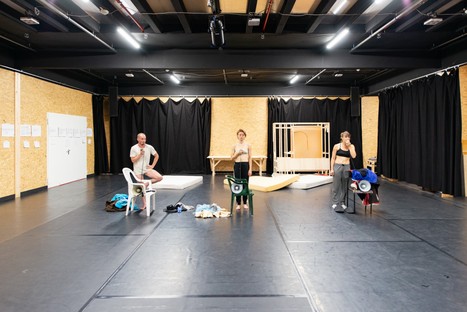 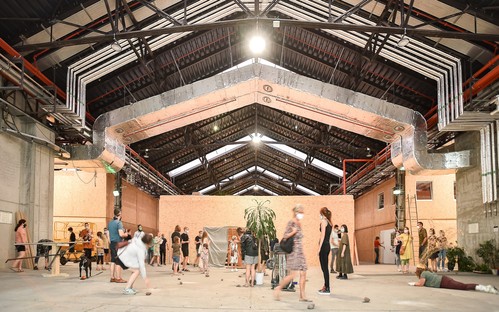 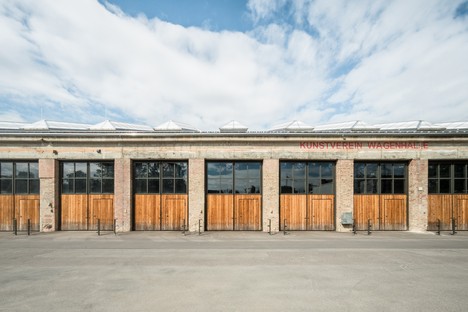 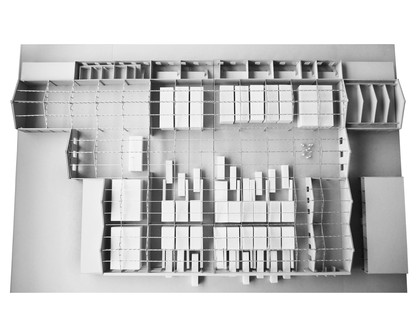 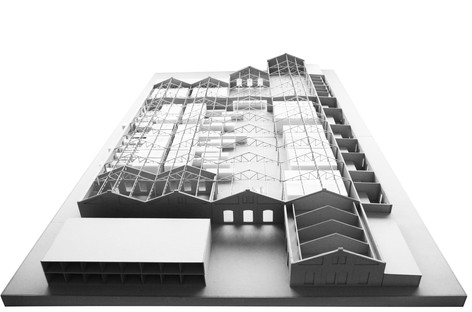 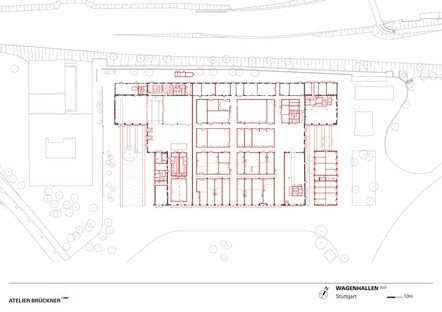 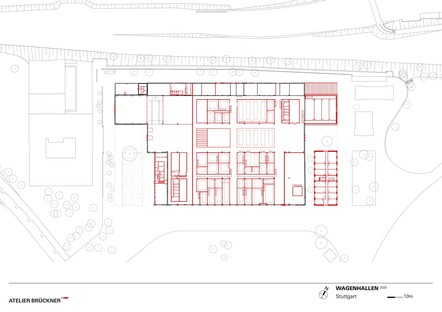