The Powerhouse Company architecture studio has designed a technology museum and reception centre for a new neighbourhood in Chengdu, the old Chinese city and capital of the Sichuan province. The project immediately became an important point of reference, especially for the iconic structure enclosing the area, a circular trail in the shape of a long red ribbon that follows the natural hills characterising the location, inviting people to explore it. 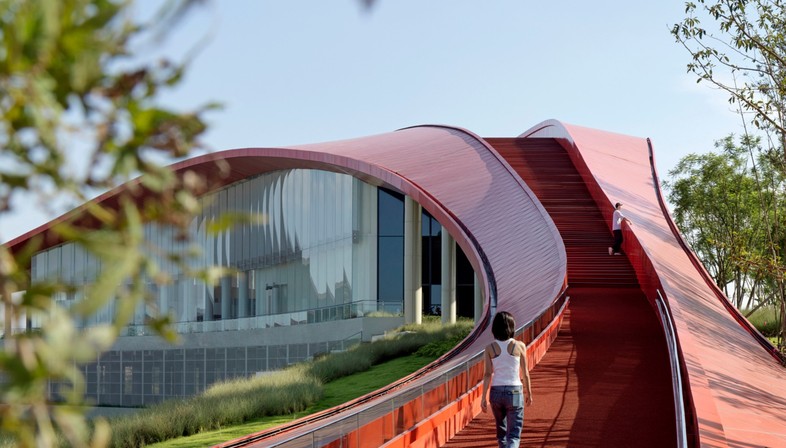 The so-called “Loop of Wisdom” and the new technology museum and reception centre, designed by the Powerhouse Company architecture firm, instantly became an icon, an easily recognisable landmark for the local community. We are in Tianfu, a new neighbourhood in Chengdu, an old Chinese city and capital of the Sichuan province. Here, the Unis Chip City, commissioned by the Unis Group, is one of several commercial and residential developments recently springing up along Tianfu Avenue, one of the main arterial routes in the area. The Loop of Wisdom Museum and the Reception Centre designed by the Powerhouse Company architecture firm was commissioned by the important Chinese company, which produces high-tech chips and components. Initially, architects were only asked to design a temporary structure able to attract public attention and to stress the presence of the technological training centre and of the reception centre closely connected to the new developments.
The project proposed by architects from the Powerhouse Company studio, drawing inspiration from the archetypal shape of a ring and closely connected to the natural hills characterising the location, obtained full support and favourably impressed the client, so much so that it became a permanent design. The long red ribbon, which recalls the geometric surface known as the Möbius strip, follows the natural hills characterising the area and becomes an inviting place for people to enjoy a walk. The strength of this urban landmark lies in not being an ephemeral structure. Indeed, it is able to establish a strong relationship with people. It is an icon that people can experience and, at the same time, a representation of the functions contained by the buildings below. The choice of the Möbius-like form, in fact, alludes to human ingenuity and to the high-tech know-how characterising the Unis Group, as well as the high quality of the building and the avant-garde technology used in the project and during its construction.
The red ribbon is made of a specific asphalt used for running tracks. This makes the route, which extends for 698 meters and reaches a height of 25 metres, suitable for runners, while offering panoramic views of the surrounding landscape and the distant mountains. The red was chosen as the predominant colour because it creates a strong contrast with the green characterising the natural surroundings, as well as making the route clearly visible during the day. In the evening, each element, such as the handrails and gutters, is carefully hidden from view. LED lights highlight only the aerodynamic profile of the structure, enhancing its fluid lines and elegant simplicity.
Under the iconic ribbon structure, the exhibition spaces of the museum are delimited by 13-metre tall and fully glazed façades. In this way, the boundary between indoor and outdoor spaces becomes evanescent and an uninterrupted connection with the natural surroundings is established.
The Loop of Wisdom gained immediate public success and will continue to play a key role for the local community, as it will become a sports centre with a school and an Olympic running track. 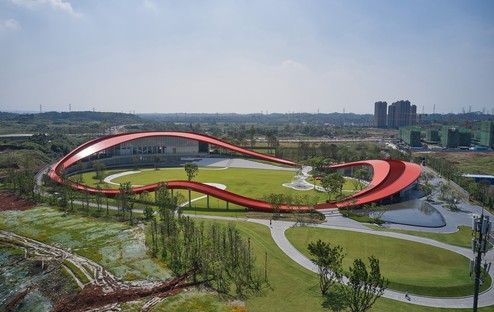 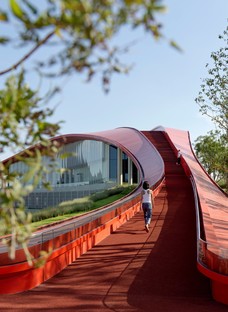 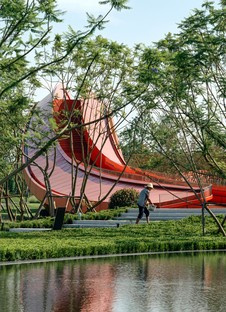 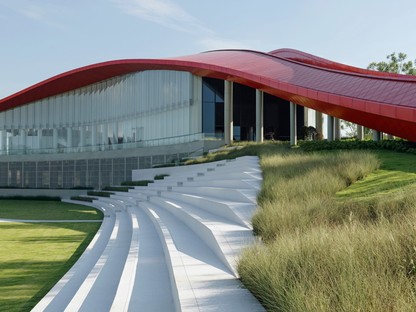 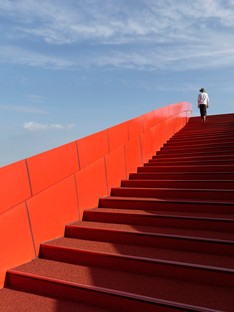 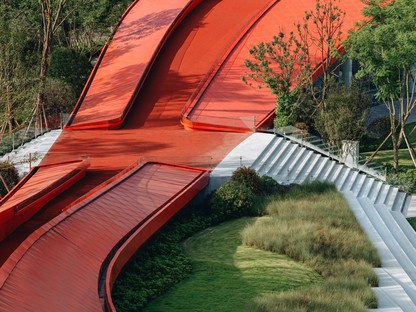 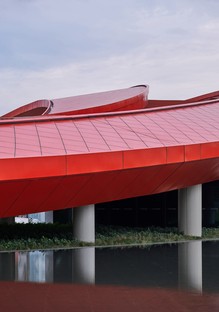 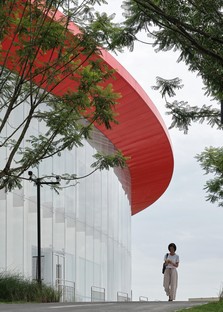 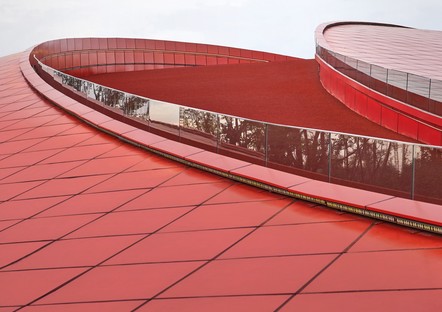 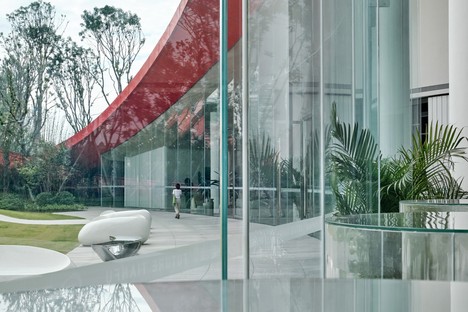 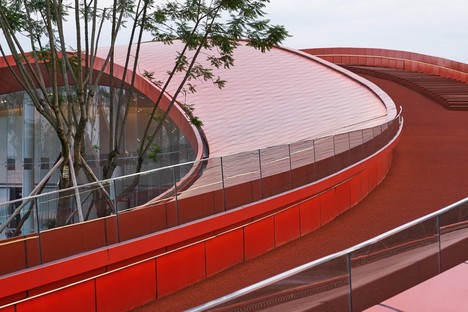 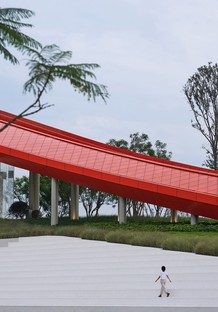 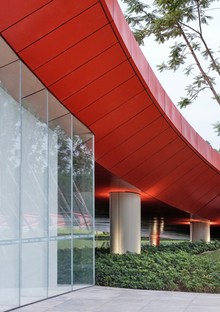 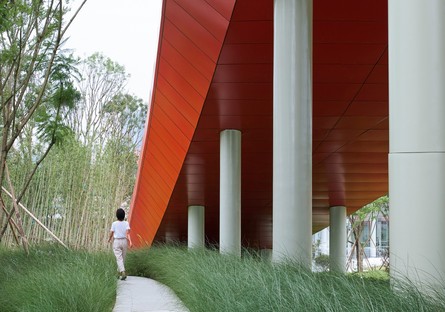 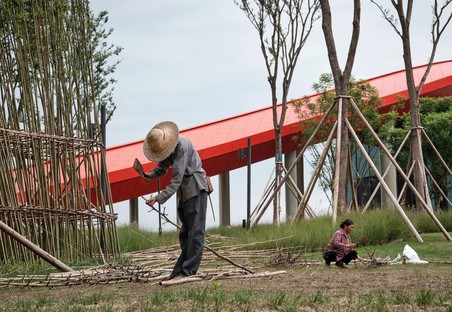 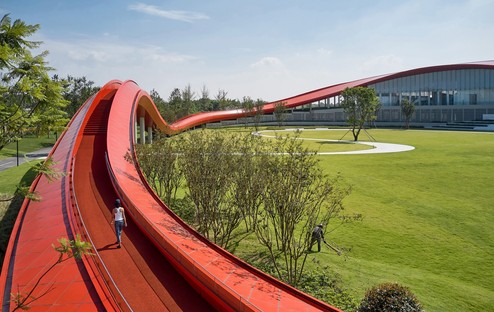 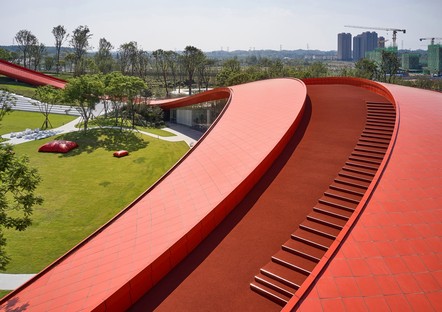 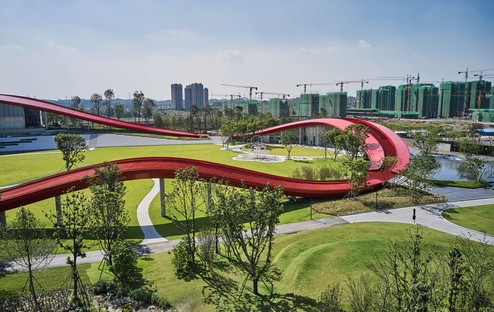 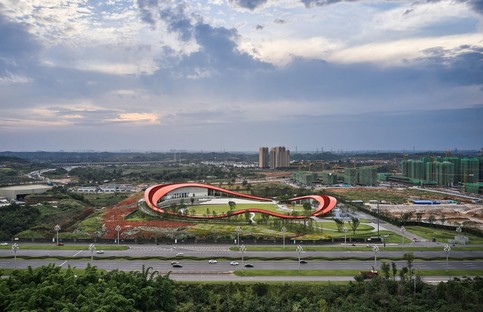 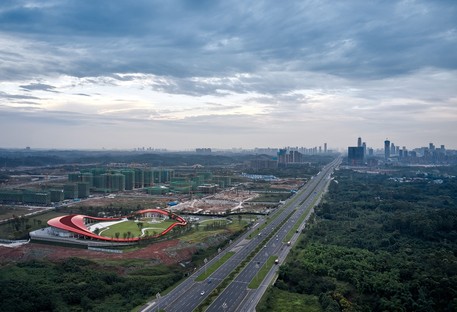 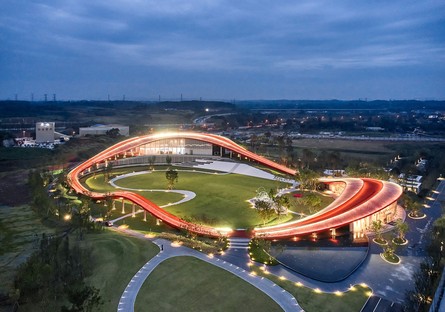 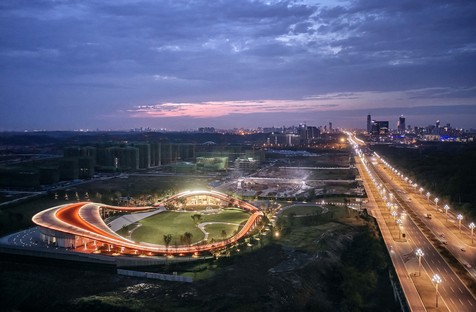