Architecture firm Piuarch was chosen by the famous Italian sneaker brand P448 to design its first store in Milan. The new store, recently inaugurated in Milan, is an innovative and unconventional space, a project designed with great attention to details and to quality materials. Piuarch, the architectural firm founded by architects Francesco Fresa, Germán Fuenmayor, Gino Garbellini and Monica Tricario, recently designed a new single-brand store for a well-known men’s and women’s footwear and accessories brand. The studio had previously designed several projects for a number of leading Italian and foreign fashion and luxury brands. The collaboration between the architectural firm and Dolce & Gabbana goes back more than twenty years, while more recent projects include the Givenchy flagship store in Seoul that opened its doors in 2014, Gucci’s new headquarters housed in the former Caproni aeronautical factory in Via Mecenate, in Milan, which later became the Gucci Hub and was inaugurated in 2016, as well as the commission to design the new Fendi Factory to be built in Bagno a Ripoli, in the Province of Florence, won in 2018.
Together with these projects, the firm has also designed concept stores for brands such as Yamamay in 2018 and, recently, the new and first single-brand store in Milan for P448, a prominent Italian brand known above all for its sneakers. 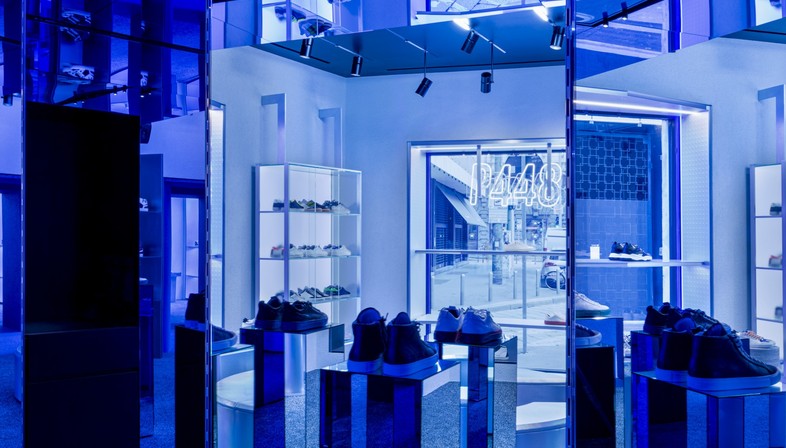 The first P448 store in Milan opened its doors in the Brera District, at the corner between Via Ponte Vetero and Via Cusani. For this site, architects from the Piuarch firm used their visionary approach to give shape to an interior design project able to celebrate the vision and identity of the emerging brand. A 100% Made in Italy brand specialised in men’s, women’s and children’s footwear collections, including the famous P448 sneakers. The project is the result of a synergy between the Piuarch architecture firm with Marco Samorè and Andrea Curti, creative directors and founders of the P448 brand. Located in the heart of the Brera District, at the corner of two prestigious streets, which it overlooks through five large windows, the new store covers a space of over 80 square metres.
The project concept was to create an innovative and unconventional store by paying close attention to details and using quality materials.
In order to succeed, the architects chose to use an iconic electric blue colour strongly linked to the brand, which became the leitmotif of the interior design project as well as the characteristic element that makes the store recognisable in the urban context. Indeed, at night, the store is immediately recognisable thanks to its bright blue lighting, closely interacting with the urban context.
Moreover, the project also brings this urban context inside the shop. The materials and furnishings selected by the architects – from the neon art installations to the two-tone floor, the rubber characterising the shoes, or the metal grid and aluminium elements used to contrast the iridescent surfaces and shiny fabrics – are all aspects that shape the space, creating an urban style environment, unconventional but sophisticated and in line with the brand spirit. The attention to details used in the interior design project becomes a demonstration of the nature and quality of the products presented. At the same time, the use of unconventional materials selected for the architecture reflects the experimental approach and research that the brand applies to its footwear production. Moreover, dark blue lacquering, blue mirrors and lighting are all elements which, in the immersive environment of the multifunctional room, help create an immediate and strong reference to the brand’s identity. 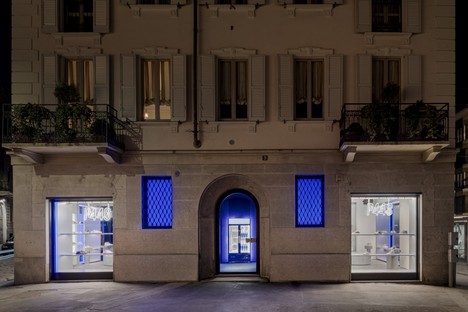 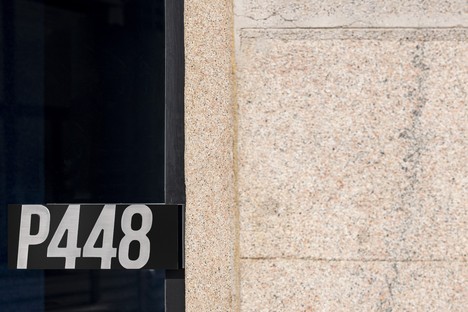 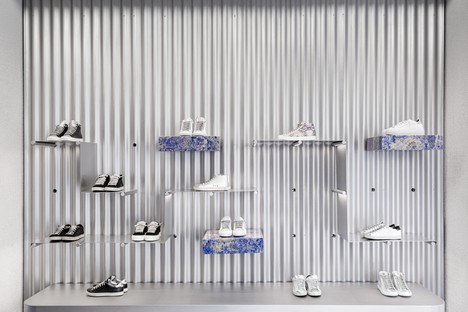 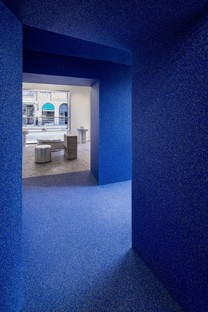 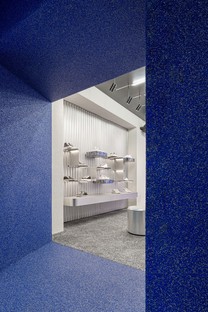 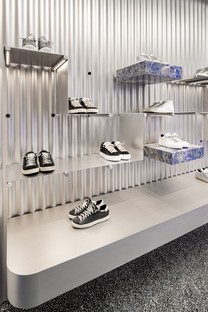 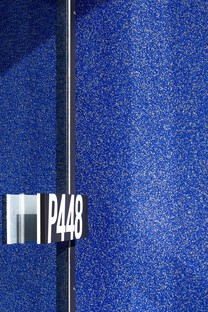 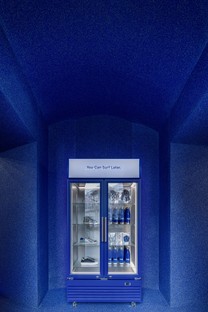 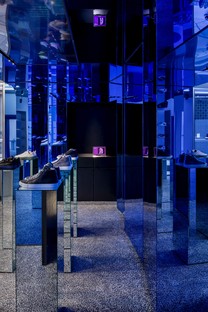 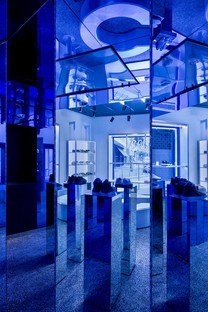