French architect and designer Philippe Starck directed the restyling of the Hotel Eden au Lac on Lake Zurich. The new five-star hotel, now called "La Réserve Eden au Lac Zurich", offers customers the experience of an imaginary yacht club with majestic interiors of timeless, classic elegance from which to enjoy stupendous panoramic views of the lake and the city. 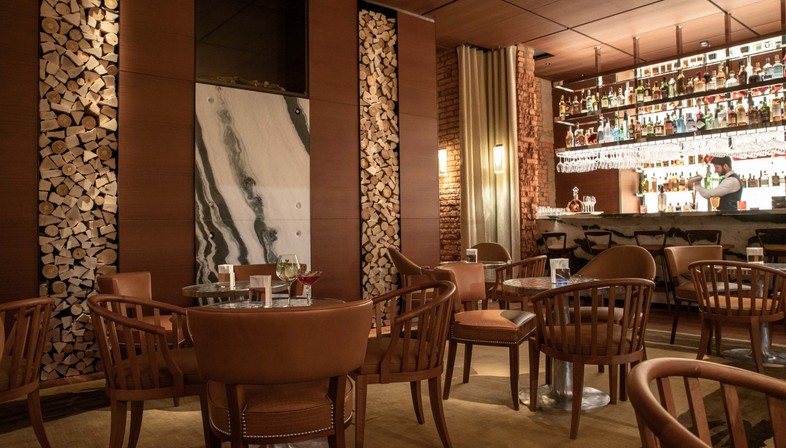 In Switzerland, in an outstanding panoramic location on the shore of Lake Zurich, stands the Eden au Lac, a luxury hotel built in neoclassical style in 1909 which survived the First World War, followed by twenty years of splendour and another decline before being relaunched in the thirties by Swiss businessman Arthur Louis Thurnheer, then surviving another World War and more transformations by various businessmen. Its long history has made the building a cultural monument, one of the world’s most historic hotels, now ready to be launched yet again in a recently completed project which the new owner, Michel Reybier, entrusted to French architect and designer Philippe Starck two years ago.
Philippe Starck designed an imaginary yacht club for the new five-star hotel, now known as La Réserve Eden au Lac Zurich: a concept developed by reclaiming nautical materials and atmospheres to offer guests majestic, sophisticated spaces of timeless elegance. 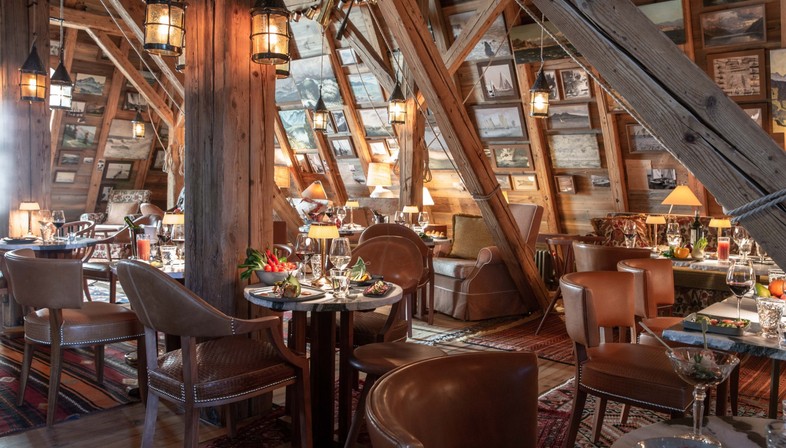 The starting point for Philippe Starck’s restyling project was restoration of the building’s structural core, making it visible once again by freeing the original construction of subsequently added layers of plaster, tapestries and wallpaper. The brick, marble, solid wood flooring and original cement trim were brought to light, and the historic sculptures on the building’s façade were preserved and restored, such as the lions’ heads silently testifying to the spirit of the place and the history of a building that witnessed the unfolding of the twentieth century.
Having restored its original structure, the architect gave the hotel the a new surrealist dimension as an imaginary “yacht club on the lake”. The imagery of the yacht club and the world of boating are evoked using materials, “artistic surprises”, and sophisticated, curated objects, as well as sentimental items reclaimed and placed here and there about the hotel, such as photographs and paintings of sailboats and a collection of resin "half-hull" boats and oars. The choice of materials is true to the yacht club imagery, such as the chiselled red wood like that of a boat’s hull, or the pale wood flooring made of wide boards like those of a boat’s deck.
The new lobby is one of the few exceptions to a restyling project that privileges the existing structure and elements. Guests are now welcomed to the new space via a side entrance, adding new comfort and privacy during check-in. The lobby is connected with the upper levels via the restored original wooden staircase and a large elevator fitted in an elevator shaft decorated with artistic glass by Ara Starck.
In addition to 40 rooms and suites of various sizes, the hotel offers guests a ground-floor restaurant with big windows connecting it with its surroundings, the Eden Kitchen & Bar, as well as a second restaurant on the sixth floor, La Muña, overlooking the city. Built in the dome at the top of the hotel, La Muña reveals the original elements of the building’s monumental structure and offers guests all-round panoramic views over central Zurich, the lake and the Alps in the distance. 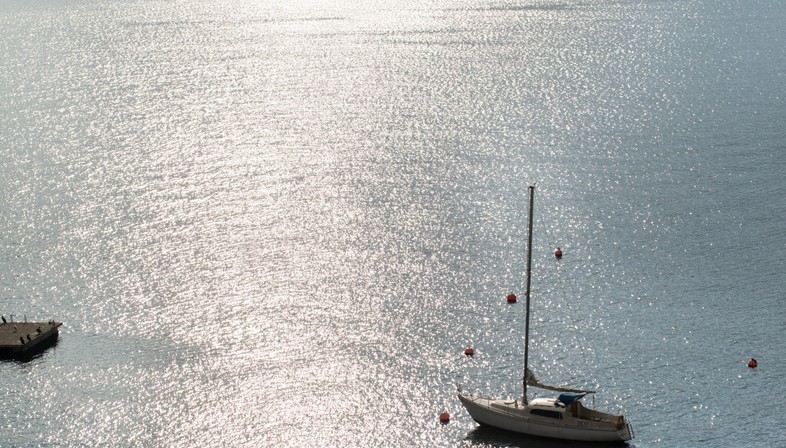 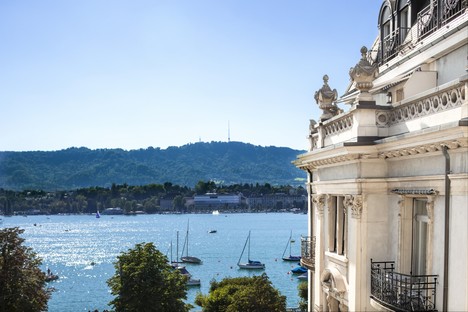 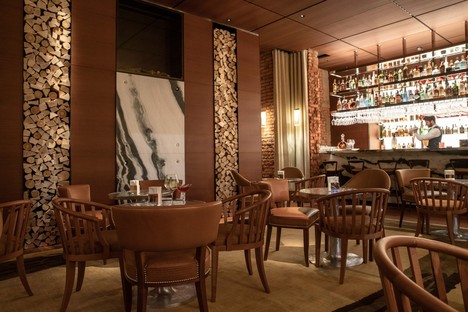 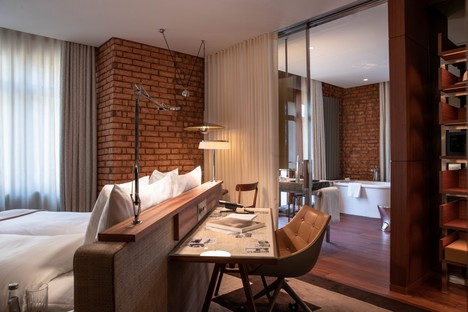 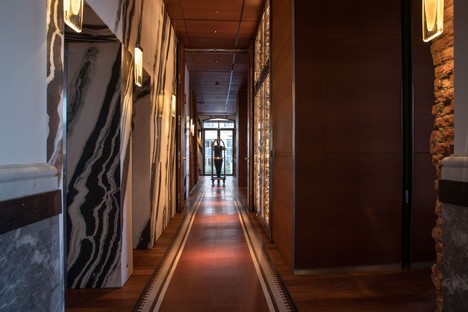 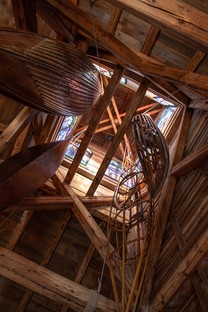 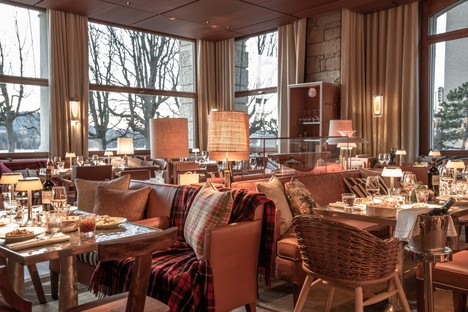 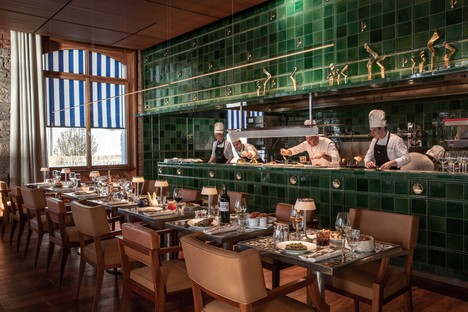 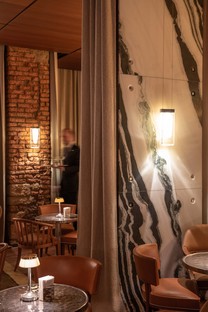 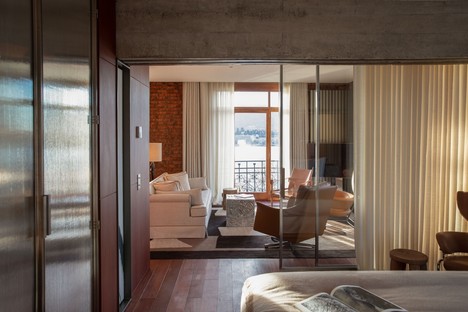 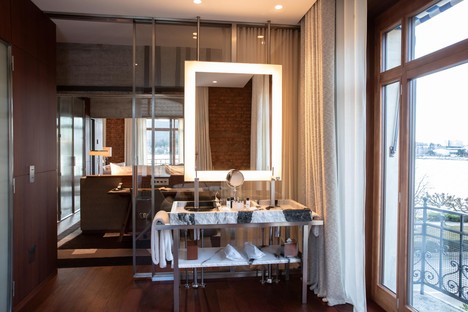 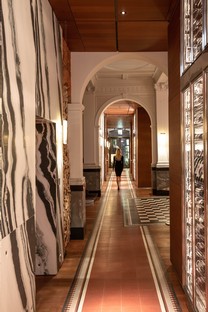 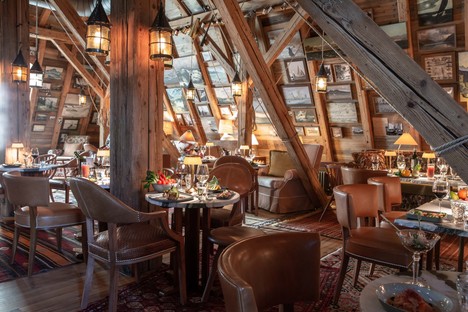 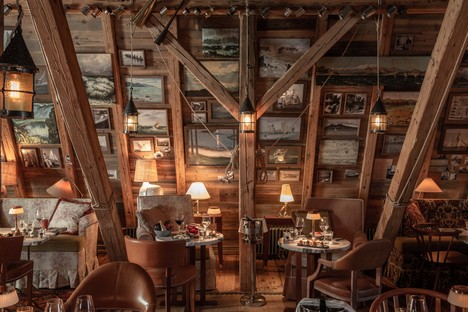 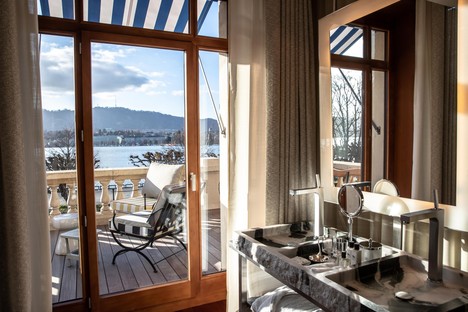 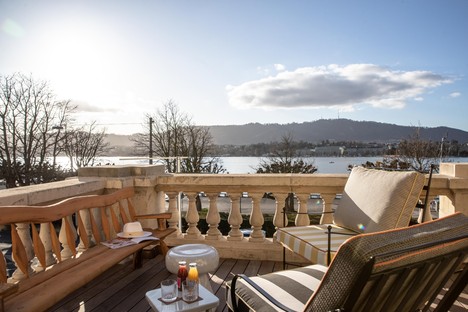 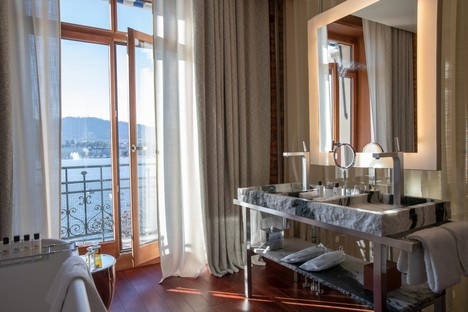 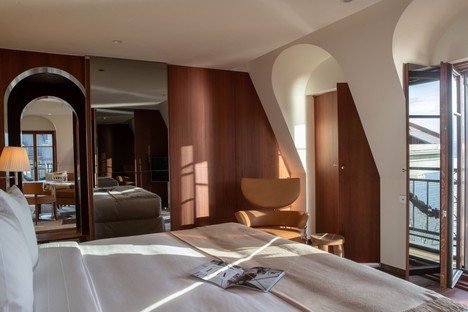 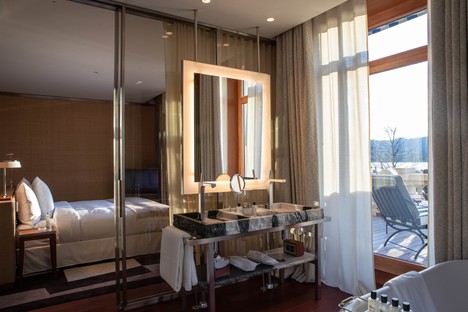 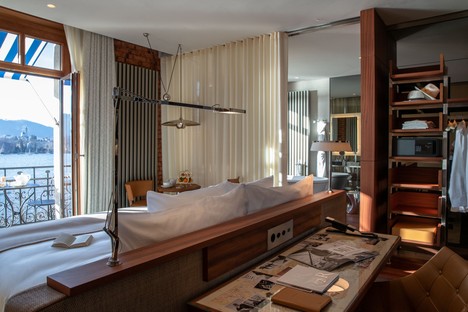 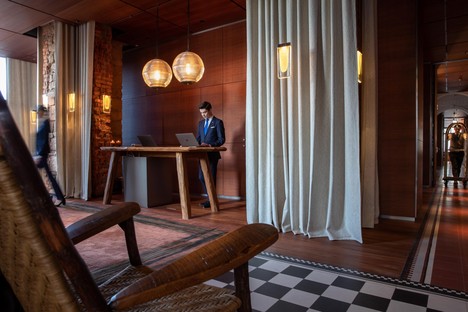 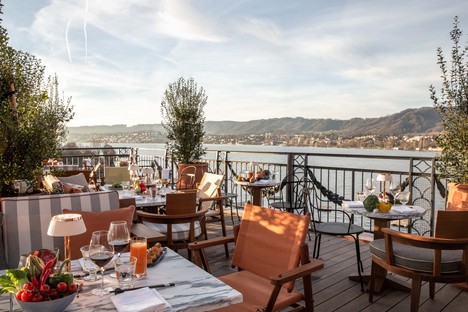 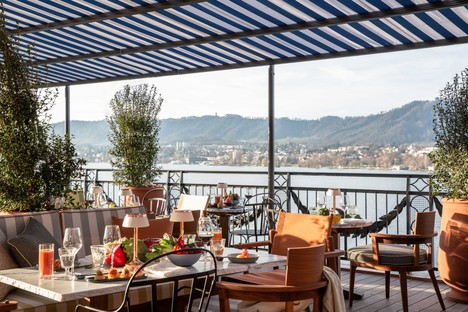 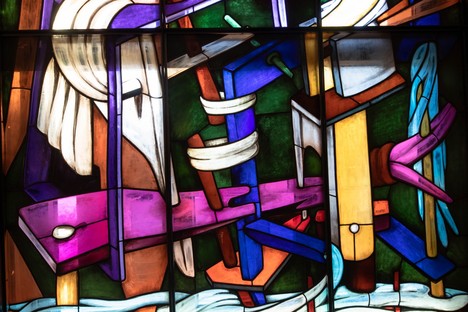 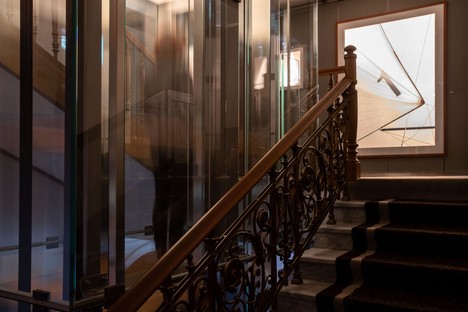 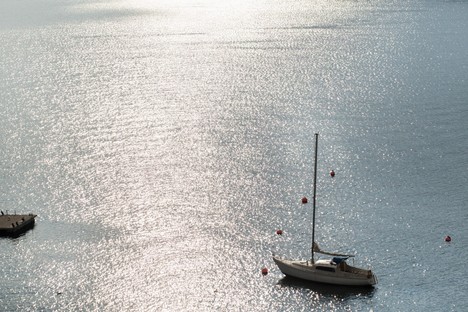 Architecture and interior design for retail