Murray Legge designed the last pavilion in Little Tiger Chinese Immersion School in Austin, Texas. In accordance with the Land Development Code, the bungalow is inspired by the ’40’s style bungalows of the North Loop district and by the architecture of the early American one-room schools located in church buildings. 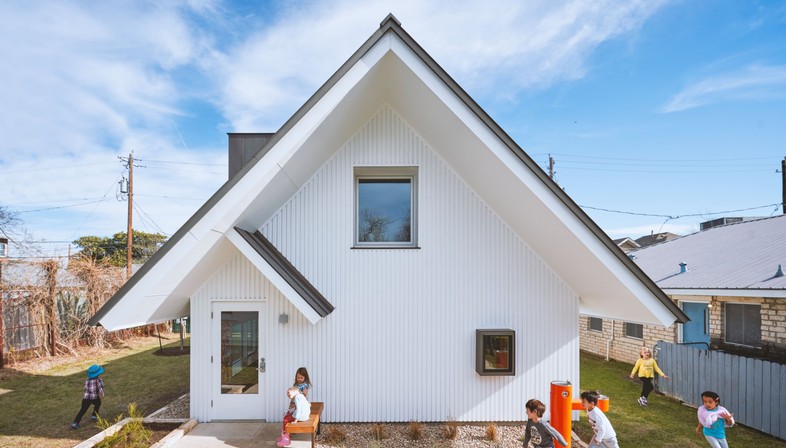 The North Loop residential district north of central Austin, Texas is home to Little Tiger Chinese Immersion School, where local studio Murray Legge Architecture designed a new pavilion that won the 2020 design award of the Texas Society of Architects.
North Loop is a residential neighbourhood divided into lots of bungalows surrounded by greenery representing a continuation of Hide Park, the big park extending beyond the financial district of Austin. This is where the first Little Tiger Chinese Immersion School was opened in 2015, for preschoolers to ten-year-olds. Employing an experimental approach to teaching in which children learn multiple languages right from infancy, Little Tiger Chinese Immersion School has always held classes in a facility like a miniature campus. The concept inspiring the architecture originates in the identify of the neighbourhood and the history of American schools: Little Tiger was in fact originally located in the halls of Ridgetop Baptist Church, located in the same urban subdivision. It was common for schools to be located in places of worship in early American communities.
In this case, the two compatible uses of the buildings also guided subsequent expansions of the school; over the years, the school purchased residential bungalows built near the church in the forties to obtain a permanent home, and held classes in these buildings surrounded by gardens, setting up an outdoor playground. In this way, and in line with the basic principles of learning through direct experience and spending time outdoors, the school developed its structure “like a small town”, to which the latest new volume designed by Murray Legge Architecture is the perfect addition.
The small studio based in Austin, which currently has a staff of only three, explains: „Our architecture reveals the extraordinary opportunities that exist in the ordinary. Employing a creative process that deeply considers practical issues of design, we examine how materials, space, and light create places that resonate and engage.” The design of the new pavilion clearly reveals the studio’s profound knowledge not only of the spirit of the place, but of the local style of construction and building regulations. Murray Legge had already designed the nearby Griffin School, and therefore had some experience in the application of the Austin Land Development Code and particularly the provisions regarding compatible uses of buildings, which permitted homes to be converted into neighbourhood churches or schools. The latest new addition to the school maintains the concept of cores connected by green areas, inspired by the look of the bungalow but with spaces designed for teaching and effective technical lighting.
With the building’s height limited by zoning regulations, the structure has a rectangular floor plan containing a single classroom, with a steeply sloped gabled roof like those on early American churches. A big vertical skylight illuminates the loft over the entrance, like the belfry of a church.
Murray Legge designed very low eaves on both the outside and the inside of the building, reducing the spaces to a child’s scale. The rectangular floor plan is divided into two parts, with the classroom occupying more than half of the space, while the rest includes an entrance with coat-hooks and two parallel blocks containing the washrooms and the kitchen on the side opposite the entrance. A long window with bench provides the children with a place to sit and read oe play while maintaining visual contact between the classroom and the garden to the north; the windows on the opposite side, and the little tables, chairs and other furnishings, are all built on a child’s scale, encouraging pupils to develop their independence. Plenty of indirect light comes into the room in addition to the light flowing in from the peak of the gabled roof, where a continuous skylight tempers the sunlight with a series of deep vertical light baffles contained in a trellis-like structure. This and the vertical skylight are solutions inspired by the work of architect Max Levy, who often works around the dialogue between home interiors and the strong Texas sunlight.
To this pared-down concept of the school classroom, where what counts is above all the lighting and the little details of the layout, we may add reflection on transformation of the building. When the owners asked for the possibility of converting the school back to a home again in the future, in view of its residential zoning, Murray Legge imagined that the ground-floor spaces could become a big living room, with the kitchen and bathroom, and added a loft, which is currently used for storage but could become a sleeping space in the future.
In structural terms, the walls consist of painted white concrete panels, while the roof is covered with metal, in a palette of materials and colours appropriate for the setting of the neighbourhood and the look of the other bungalows around it. This and the architects’ other compositional choices were essential to create a sense of community and shared identity in the little campus, and ensure continuity with the other buildings in the neighbourhood. 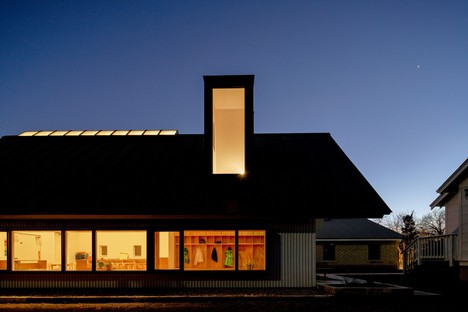 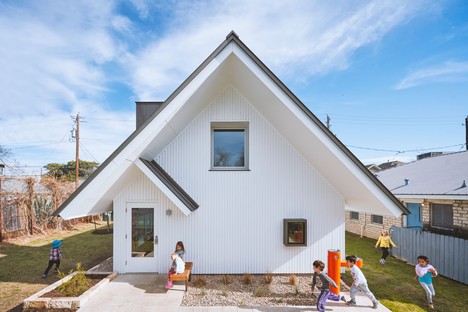 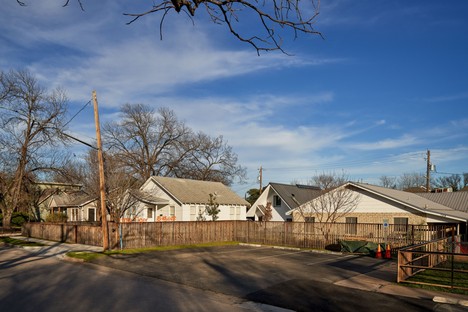 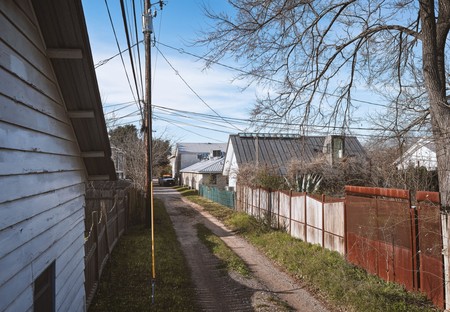 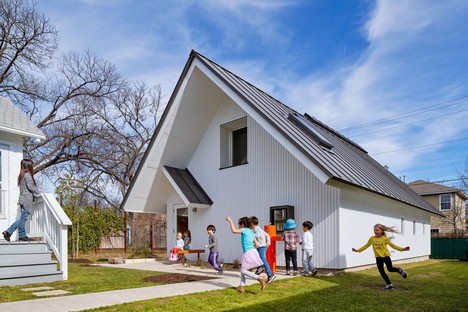 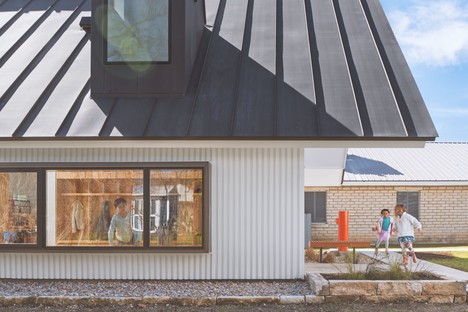 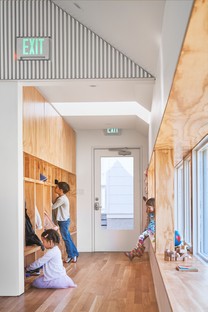 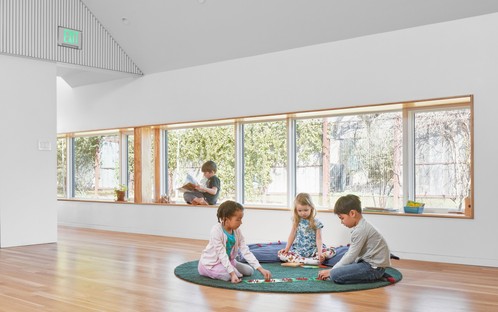 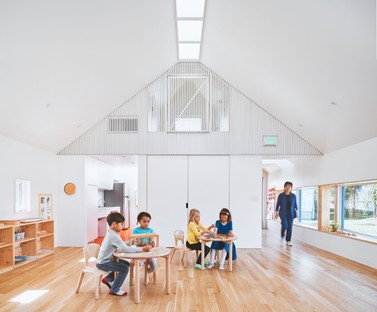 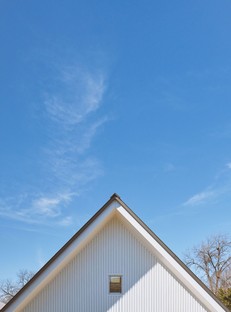 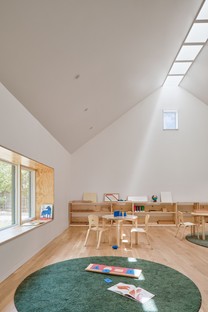 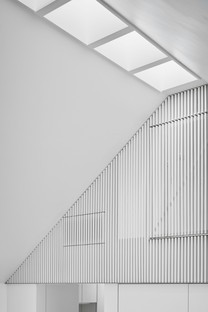 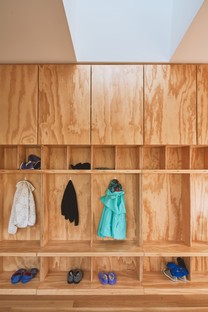 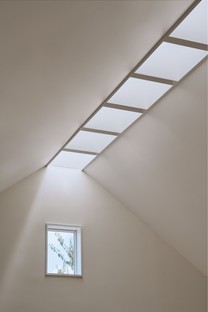 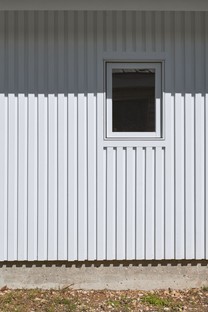 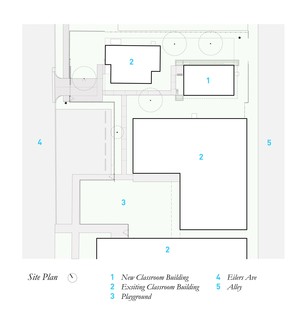 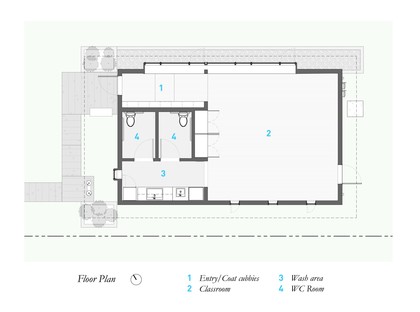 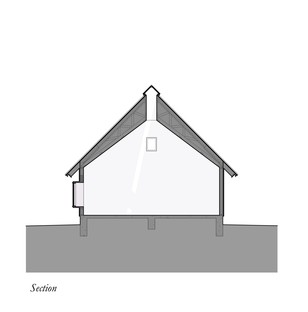