Milan’s Museo Poldi Pezzoli marks the five hundredth anniversary of the death of Leonardo da Vinci with the exhibition "Leonardo and the Madonna Litta". Migliore+Servetto architects’ installation design shows off this masterpiece of the great genius and all the other paintings in the exhibition while allowing visitors to enjoy the historical setting of Milan’s Museo Poldi Pezzoli. 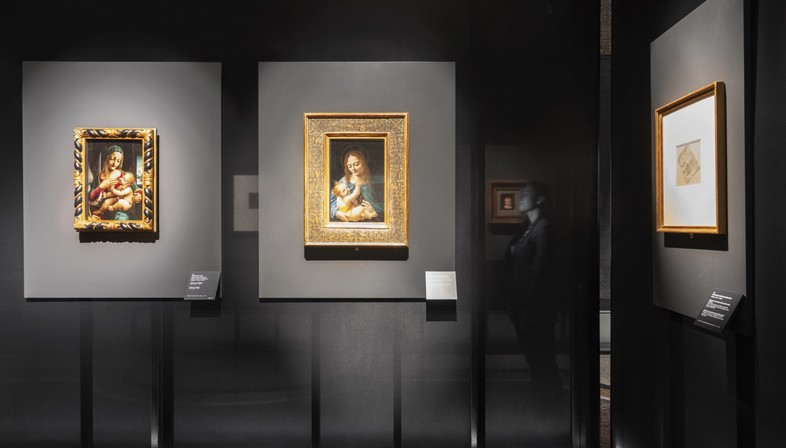 "Leonardo e la Madonna Litta", the new exhibition that just opened at Museo Poldi Pezzoli with an installation designed by Migliore+Servetto architects, is one of the events on the calendar of Italy’s national celebration of Leonardo da Vinci, promoted by MiBACT – the Italian Ministry for Culture and Tourism, and other local institutions in 2019 to mark the five hundredth anniversary of Leonardo’s death.
The great humanist, scholar, painter, scientist and architect was undeniably a genius, one of the most eclectic figures in human history. Milan has special ties with Leonardo, who spent twenty years in the city, working on a number of ingenious projects for Ludovico il Moro, the Duke of Milan, the best known of which are the canals for navigating the city and the painting of the Last Supper in the Refectory at Santa Maria delle Grazie.
Several events are being held this year to mark the five hundredth anniversary of Leonardo’s death and illustrate the city’s special relationship with the great Renaissance genius for locals and visitors alike. 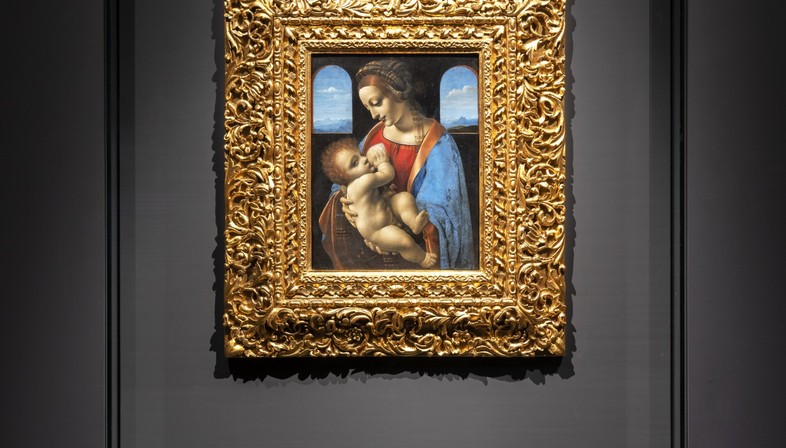 The exhibition "Leonardo e la Madonna Litta" is one of a series of initiatives held in the city of Milan to celebrate the genius of Leonardo and mark this important anniversary, bringing Da Vinci’s masterpiece back from Russia’s State Hermitage Museum for the first time in almost thirty years. The installation designed by architects Ico Migliore and Mara Servetto of Migliore+Servetto architects receives Leonardo’s painting and the other works on exhibit with elegance and lightness while showing off the historic setting of Museo Poldi Pezzoli.
The exhibition design and graphics by Migliore+Servetto architects underline not only the artworks on display but the wealth of the spaces in the home and museum containing them. The exhibition system organised by the architects with tall translucent panels lends rhythm to the museum spaces, and the works are supported on light easels in spaces that underline their beauty. Visitors are accompanied along a path of discovery of the artwork in which Leonardo’s famous masterpiece, the Madonna Litta, plays the starring role. The exhibition curators determined the order of the content and then built a progressive exhibition route as a result. The starting point is a drawing by Leonardo, continuing with discovery of the work of the great master’s pupils before coming to the most important part of the exhibition. The Madonna Litta is exhibited against a dark, veiled background, set off by specially designed spotlighting, so that it is clear that the painting is the absolute star of the scene. Two preparatory drawings are exhibited on the wall beside it, as if in preparation for the view of the famous masterpiece. Works by Leonardo’s pupils follow. Once again, the architects use an elegant non-stop play of transparencies to maintain the artwork’s visual relationship with its historical context in the museum spaces. The exhibition continues upstairs, where a series of videos provides more information on the work and the issues involved in its attribution, presenting visitors with a historical document from St. Petersburg. 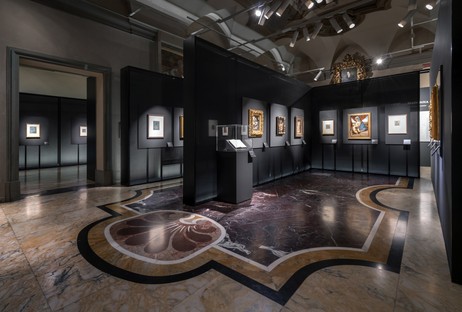 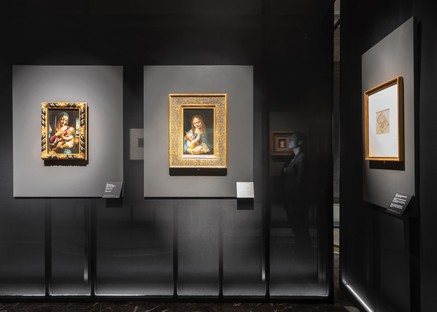 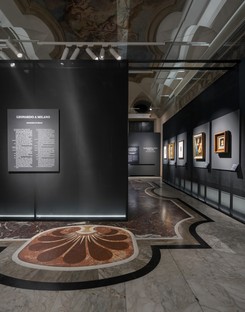 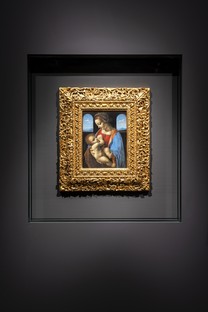 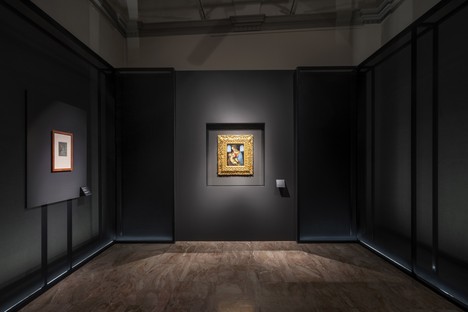 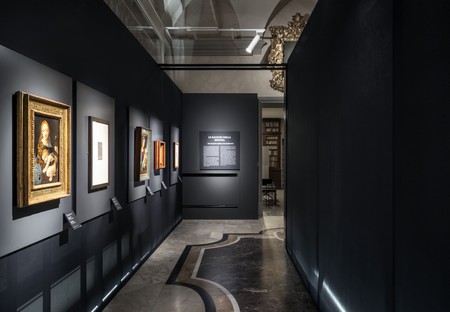 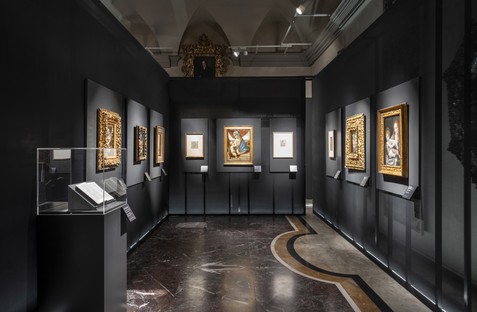 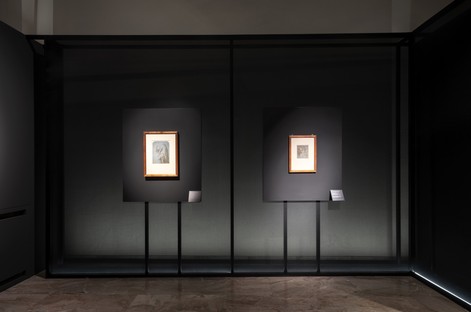 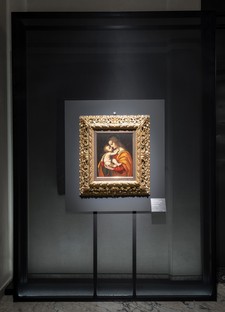 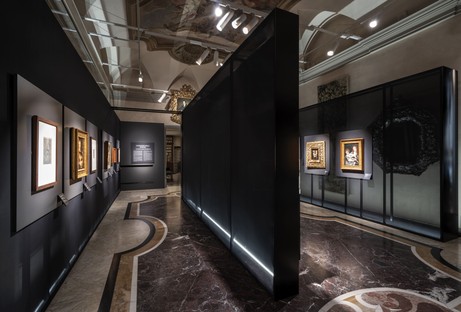 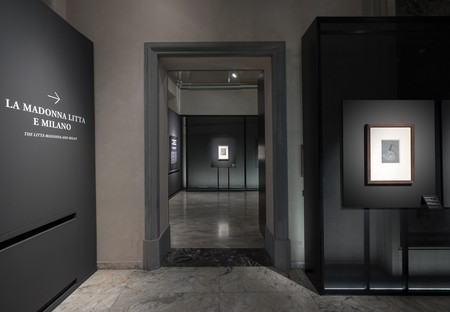 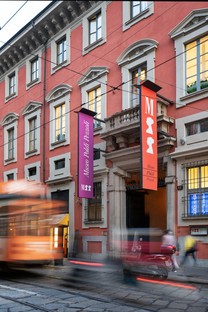