One of the best-known Italian contemporary architects and designers, Massimo Iosa Ghini (1959) is a graduate of Milan Polytechnic.
From the mid-1980s, he participated in the avant-garde currents of Italian and European design, first establishing the Bolidist group and later as a member of the important Memphis group with Ettore Sottsass.
It was in this initial important period that his collection of upholstered furniture created for Moroso (1987) won the Roscoe Award.

Active in all fields of design, from interior to product design, he designs areas and structures for transportation, commercial architecture and museum spaces and is “a proponent of an aesthetic of speed and fluidity.” (Treccani)
In particular, the many projects developed for famous international brands establish Ghini as one of the industry’s points of reference in the contemporary design scene.

Iosa Ghini created showrooms and stores for the commercial activities of well-known brands such as Ferrari, Capital Group, IBM Italia, CMC Group Miami, Seat Pagine Gialle, and Alitalia, in his continuous activity over the decades, marked by many prestigious awards.
These include the Good Design Award by Chicago Athenaeum, the Red Dot Award and the iF Product Design Award in Germany, the Roscoe Award in the United States, the IAI AWARD Green Design Global Award and the IAI Awards in Shanghai, China.
With the many showroom stores created for Ferrari since 2002, Iosa Ghini is one of the representatives of corporate design identity for the prestigious brand. These include the store in the centre of Milan (2005) and the Factory in Serravalle Scrivia (2009), as well as the design of the Maserati Museum in Modena, and the restyling of the Ferrari Gallery Museum in Maranello (2004).

His activities in the 2000s include the Kropcke metro station in Hannover created on the occasion of Expo 2000; the design of The Collection Residences in Coral Gables, Miami (2002); the restyling of the Garage San Marco in Venice (2009); the architectural restoration and the new interior of the Giorgio Morandi House Museum (2009); the office areas and special halls of the new SEAT - Pagine Gialle Headquarters in Turin (2009); and the IBM Software Executive Briefing Center in Rome (2010).
His new home/studio/showroom designed in (2012) "represents a qualitative renovation of an original structure from last century’s rationalist period. The intervention lends dynamism to the original structure without forgetting the component of conservation."
With great attention to detail and a penchant for experimentation, Iosa Ghini reinterpreted the southern façade in particular, so as to attract as much sunlight as possible.

Other aspects to be highlighted are the "minimization of consumption, design of unique custom-made elements, aesthetics, high quality materials and comfort."
His most recent architectural projects include the innovative People Mover transport system designed for the city of Bologna. The infrastructure connects the high-speed railway station and the airport in just a few minutes. The People Mover is 5000 metres long and comprises the monorail, the two terminals, the Lazzaretto intermediate stop, and other services.

"The theme of the stops and the bridge for bypassing the motorway-ring-road system was conceived by studying a typology of architecture that took into account the need to connect an infrastructure to an urban fabric destined to undergo important redevelopment interventions, but which in part is incorporated into the surrounding Bolognese countryside."

The People Mover has the characteristics of "a long and environmentally friendly ‘belt’", with the presence of photovoltaic panels and green areas.
Iosa Ghini has lectured extensively in schools and academies, including La Sapienza in Roma and Milan Polytechnic, the Elisava School in Barcellona, the Köln International School of Design, and the Hochschule Fur Angewandte Kunst in Vienna.

Two important retrospectives have been dedicated to the first thirty years of his career, one organized by the Milan Triennale in 2013, and the monographic exhibition hosted by the MAMbo in Bologna (2014).

What can we expect to see at MAMbo in Bologna? How did this thirty-year adventure begin?

The exhibition at Mambo reflects my own personal evolution, the evolution of the world of design and the evolution of Italian society and lifestyles, all starting in the '80s, a time of great power and strength. I started out in fashion, and in fact the exhibition includes some of my designs for Ferré, Krizia and other stylists at that time.

What is Bolidismo, the movement you became famous for when you were still very young, and what is its message for the present day?

Bolidismo’s manifesto was all about speed. There was no internet in those days, but the movement had an inkling of the idea of simultaneity, of a world in which information would travel much faster, practically instantly. And our reaction, as young architects, was to represent speed in the physicality of objects, in the objects themselves. 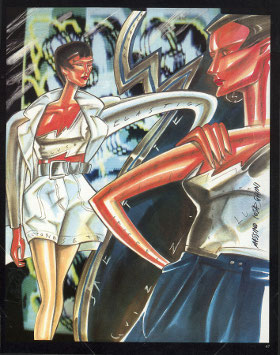 You have worked on a lot of shops and showrooms in your career. How has retail design changed in recent years, and how do you think of it today?

The first shops of any real importance that I worked on were Swatch stores. After which Elio Fiorucci asked me to design some of his stores, which were already something like a chain. And now this is the method: we come up with a concept and apply it to the world as a system, in some cases on a very large scale.
Then there are some retail projects linked with brands that don’t sell a physical product. We recently worked on IBM briefing centres, which are places where the company receives a brief from the client about the software. It’s still a matter of sales, not of a material product but of a project. There’s a shift from the atom to the bit.

The Mambo exhibition includes projects you designed for both Italian and international companies. How has the designer’s relationship with the client changed?

The Italian productive system generated an opportunity to cultivate creativity. Our industry is made up of lots of small but very flexible companies capable of working on projects that the big international companies wouldn’t dream of working on. And this is where the difference lies: the ability to set your heart beyond the barrier, which is a rule for us, an ability that we need to continue developing.

Tell us about Oko, the residential and office complex in Moscow, an important interior design project you currently have underway.

The Oko Office Building is a big complex in Moscow City, Moscow’s office district. In this project we’re using 150x300 cm tiles, a major technological innovation developed in recent years by Iris-FMG Fabbrica Marmi e Graniti, with some really new finishes. It truly is a pleasure to see them made, because these are surfaces that have very little grouting, creating a very prestigious look that I like to use both on the floor and, in part, on the walls.

And what does Massimo Iosa Ghini have to say about sustainability?

I think that what sustainability means today is managing to come up with new interpretations of the idea that we need to save energy, without giving up the effect of surprise, of discovery. Because this is the point: we need to make things that are sustainable, but beautiful too!

After working on the new showroom in Iris-FMG Fabbrica Marmi e Graniti's historic premises, you completed the design by redeveloping the outdoor area around it. What is Linea di luce?

Linea di Luce came about after designing the Iris-FMG showrooms, in which the key idea is dematerialisation. A showroom must provide a background for a product, without competing with it for attention. The basic idea is transparency, light, intangibility as the substrate supporting the tile itself, to highlight all its expressiveness.
The idea of light also inspired me outside the building, where the product is clearly showcased in application in a public space, which also represents the company for practical purposes, where it can organise events. Conceptually the result is a sort of embrace, because the space has a curved shape inspired by the ancient Greek amphitheatre.
To me architecture is design, but also a place of dialogue determining something physical, a manufacture which is based on our culture, on the imagery we all have as citizens living in the city.

Architect Jean-Pierre Lott designed Le Stella in the historic centre and shopping district of the...

The centenary of the birth of Vico Magistretti will be celebrated in 2020. The Fondazione Studio...

Wasit Wetland Centre is a centre for biodiversity and environmental education designed by...