MC A – Mario Cucinella Architects recently completed the Church of Santa Maria Goretti in the heart of Pollino National Park, CEI 2011 Pilot Project winner. The Church is a monolithic white volume 16 metres high, dominating the town of Mormanno, with only a few simple elements of the façade recalling the Christian tradition. 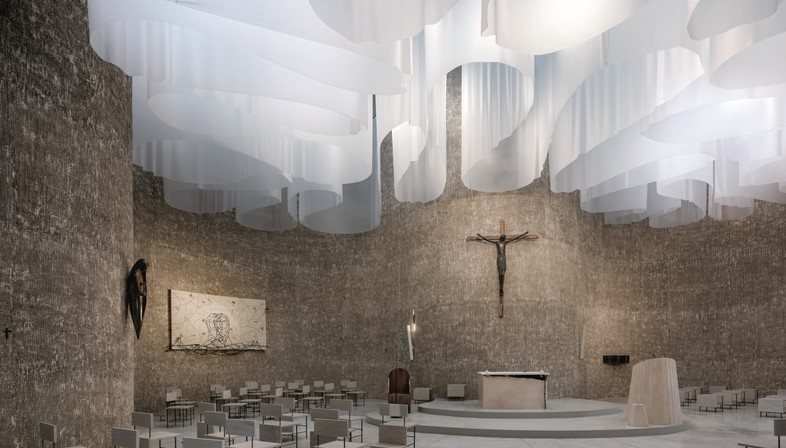 In Mormanno, a small mountain village in Italy’s Pollino National Park, MC A – Mario Cucinella Architects recently completed the Church of Santa Maria Goretti, the 2011 Pilot Project winner of the CEI, the Episcopal Conference of Italy.
The 16-metre-high church is a solitary white volume, a monolithic treasure chest dominating the town around it and containing sacred spaces for religious services.

The new route accessing the church is on the northwest side of the site, where spectacular views over the natural beauty of the park prepare visitors for the spiritual nature of the place of worship. The pavement of the churchyard is the same as the floor inside the church, creating a single path to the majestic entrance, engraved with words recalling the life of Saint Maria Goretti to invite worshippers inside and symbolically mark their arrival in the sacred space. The site is also accessible via the existing road, used primarily to reach the spaces annexed to the rectory, which form a sort of small urban complex overlooking the valley and surrounded by gardens.
Mario Cucinella chose an organic layout for the church inspired by a profound search for balance between architecture, contemporary art and sacredness. “The four arms of the cross-shaped layout”, says the architect, “become petals which, with the complicity of light dialoguing with the structure, surround and embrace the space”. The geometry is inspired by some of Italy’s most beautiful and important Baroque churches (such as the Basilica of Sant'Andrea delle Fratte, the Basilica of Sant’Andrea al Quirinale, the Church of San Carlo alle Quattro Fontane and the Church of Sant'Ivo alla Sapienza, all in Rome, or the Oratorio Ghisilieri in Ferrara) because “Designing a church”, comments the architect, “is a message of continuity with the spirit of art that has passed unperturbed through the centuries of humanity.”

The bonds between architecture, art and the sacred are present in a number of elements, producing some of the key symbols of the Christian tradition. Such as the symbol of the cross, appearing vertically on the main façade visible from the new square in the form of a subtle incision of great symbolic power which is lit up in the darkness of evening. This result is obtained through a simple but powerful gesture, from the intersection of the entrance portal with the subtle separation of the cladding on the façade.
The outer cladding contains another important reference directly linking the saint to whom the church is consecrated with an essential ritual in the Catholic liturgy. The story of the “the stages of the cross” is told in a series of clay tiles on the church’s outer cladding, designed by artist Giuseppe Maraniello and made by local children during the pandemic. The episode of the crucifixion itself is represented not by a clay tile but through a window framing the crucifix inside the church. Its position was carefully studied to ensure that on June 6, the date of death of the saint to whom the church is dedicated, a ray of sunshine is aligned with the window, completely illuminating the crucifix and creating a symbol of great spirituality. Daylight, a symbol of Christianity, is in fact skilfully used throughout the project. The interior is pervaded with sunlight thanks to the synergy between the Baroque forms of the architecture and the artworks of Giuseppe Maraniello, such as the series of translucent veils suspended in the upper part of the sacred space, recalling the northern lights and contributing their mystic reflections to the creation of an intimate, meditative atmosphere. 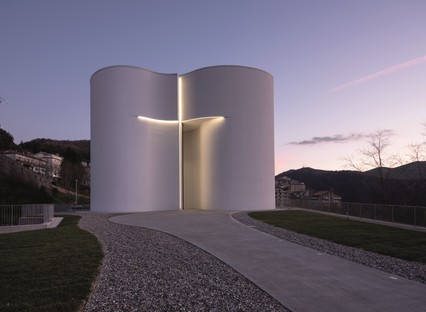 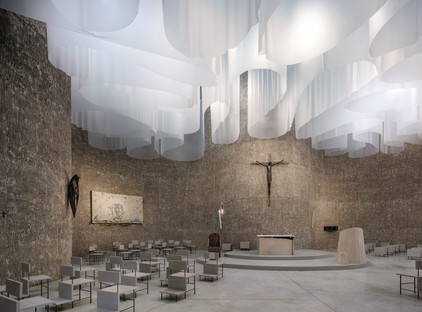 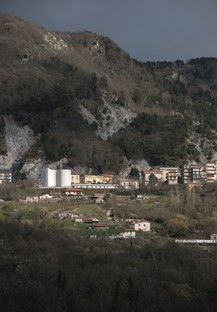 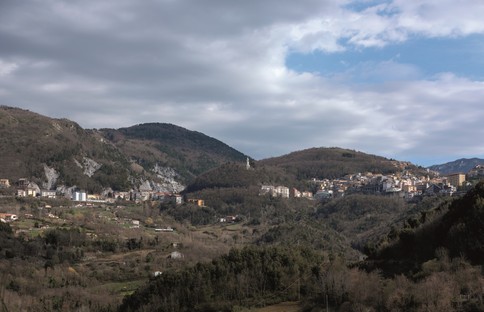 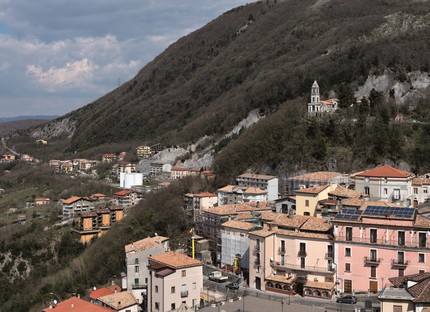 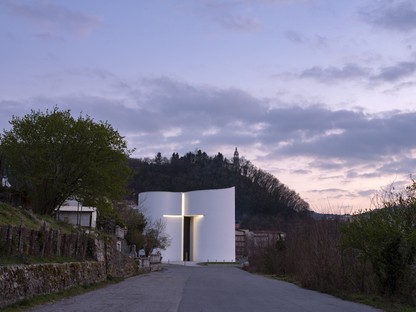 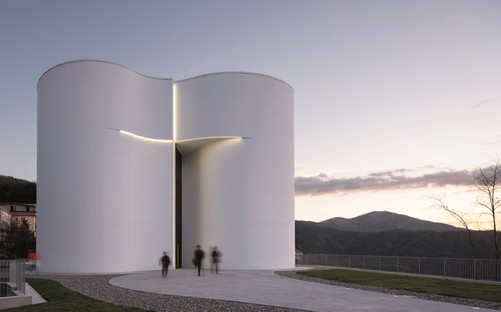 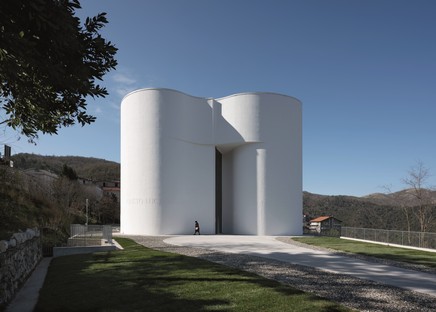 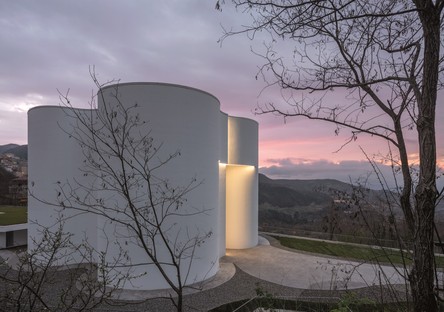 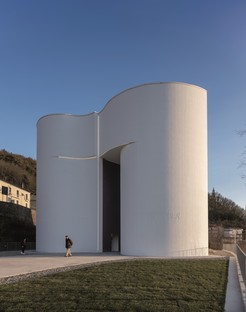 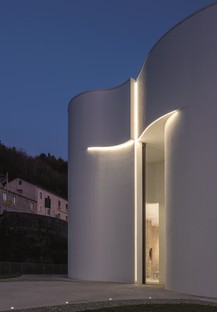 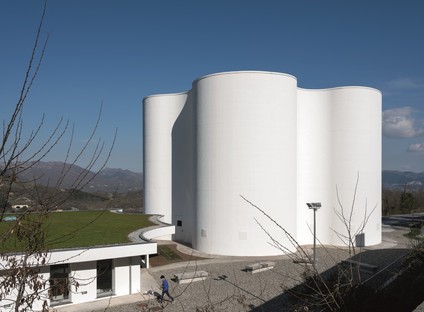 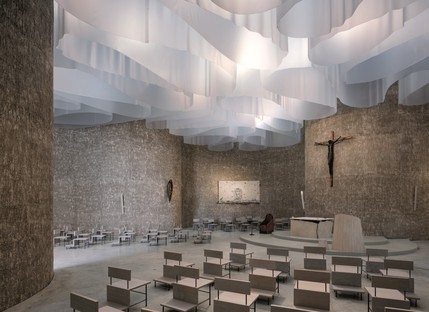 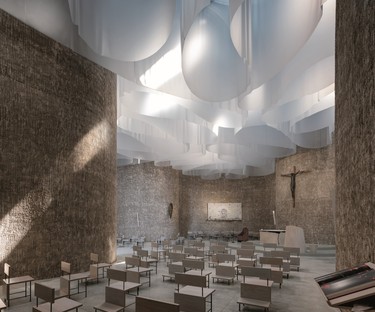 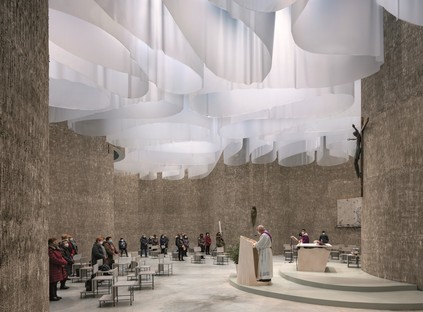 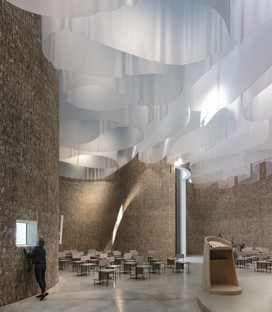 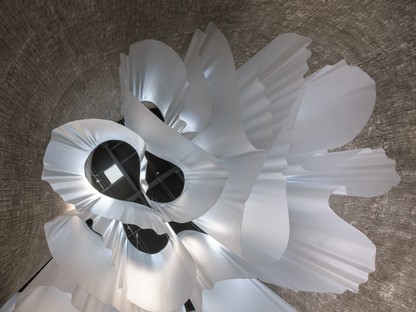 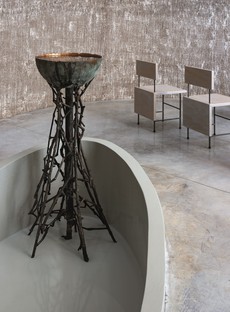 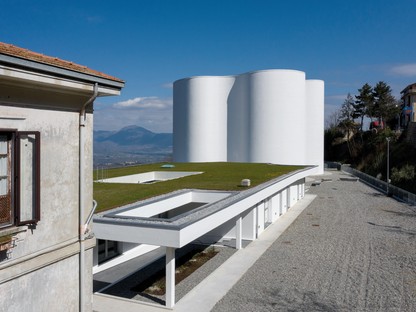