French architect Marc Mimram has designed the new tennis court at Stade Roland Garros in Paris, as commissioned by the Fédération Française de Tennis and the Direction des Espaces Verts et de l’Environnement de la Ville de Paris. Indeed, aside from the new court, the project also includes improvement works for the Jardin des Serres d’Auteuil, with the iconic nineteenth-century greenhouses designed by Jean Camille Formigé that it is home to. 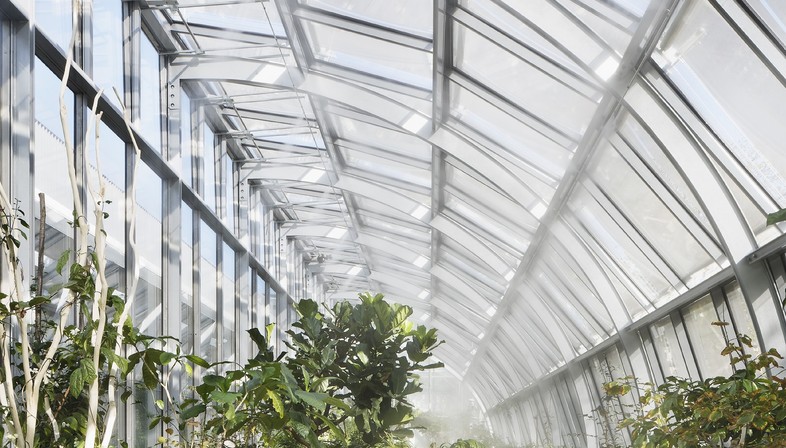 Jean Camille Formigé was a French architect who was responsible for the promenades and public gardens in Paris, designer of two exhibition halls used for the 1889 Expo and several conversions of the squares and green spaces in the City of Lights into gardens. However, the work for which he is undoubtedly most famous is the Large Greenhouse in the Jardin d’Auteuil in the 16th arrondissement.

This towering monument was a novel landmark in its time, one of the first to be made of glass and steel, and retains its historical importance to this day. That is why the Fédération Française de Tennis and the Direction des Espaces Verts et de l’Environnement de la Ville de Paris wished to have the new tennis court of the Stade Roland Garros, the illustrious host of the homonymous tournament, built here.

The two important French institutions called upon Marc Mimram, an architect and fellow countryman, to head up the project, imposing three fundamental constraints on him. The first, which was a given due to the structure’s proximity, was for it to communicate with Formigé’s Large Greenhouse and respect its importance. The other two, meanwhile, consisted of constructing an extremely high-performance building and improving the botanical character of the garden as a whole, building new greenhouses intended to replace some of the existing ones which stood alongside Formigé’s historic design, yet lacked cultural or aesthetic value.

As such, Marc Mimram found himself faced with a systemic project without an obvious solution. The architect decided to remove a series of warehouses in order to create a connection between the wooded park, present on the North-East side of the Jardins, the greenhouse area in the West, and the new court - dubbed the Simonne-Mathieu - to the South. A lush green square, regular and clean, took the place of the buildings, connecting the three poles of the Jardin des Serres d’Auteuil.

In fact, the new court of the Stade Roland Garros is itself a greenhouse. In compliance with the first of the three constraints, Marc Mimram decided that he wished to recreate its typical glass and steel structure. There are at least two reasons for this: one the one hand, the need to maintain a certain visual coherence and dialogue with Formigé’s work, and on the other, a desire to build brand new greenhouses capable of giving space to plant species from four continents other than Europe. As such, the Simonne-Mathieu extends along the perimeter of a pre-existing field, enclosing it with imposing glass-covered tensile structures designed specifically to accommodate unusual and exotic plants. This way, any spectators looking up will have the impression that they are actually in Formigé’s nearby Large Greenhouse.

According to Mimram’s firm, the life of the Simonne-Mathieu court will be split into two distinct periods. These will be the duration of the Roland-Garros tournament, on the one hand, and the time when the greenhouses and botanical garden are once again the stars of the park - namely, the rest of the year - on the other. Indeed, the court will only be active during the tournament, whilst the rest of the year will see its external windows open to the public as it plays host to exhibitions and botanical biotopes. These greenhouses, which are located all around the perimeter of the stadium, will have a linear length of 220 metres. For each of the two separate periods of use, the new structure of the Stade Roland-Garros will have a different layout and perform different functions, according to their type of use and intensity of footfall.

The orientation of the new court is the same as that of the Large Greenhouse whose aesthetic it echoes, although the new structure is set to be updated with 21st-century technical capabilities. The steel structure with variable inertia could not have been designed in BIM in the nineteenth century. Formigé would not have been able to calculate the exact inclination of the windows with which to shade all the grandstands and the 4950 spectators they hold without reducing the amount of light on the court, let alone the microclimates and ventilation that would be created in such a complex, orderly and magnificent maze of glass and steel.

To conclude with the words of Mimram himself, the design “is an athletic and constructive jewel which takes its place in the garden with a certain delicacy, improving the exposure of the plants and showing how the new Simonne-Mathieu tennis court can be functional, entering into dialogue with the nature of the garden which plays host to it”. 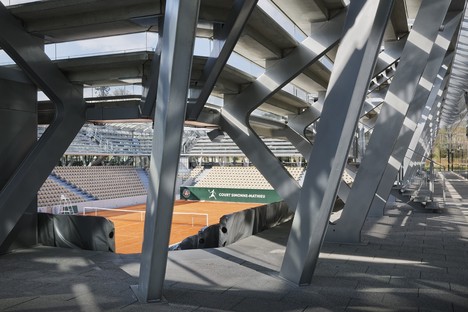 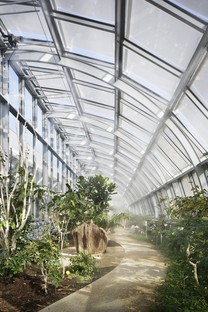 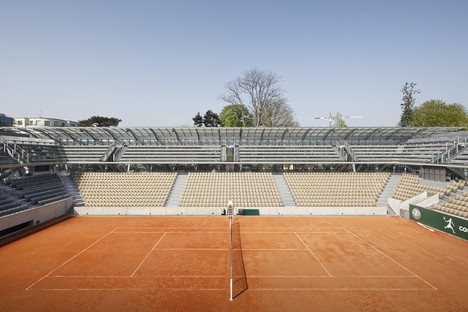 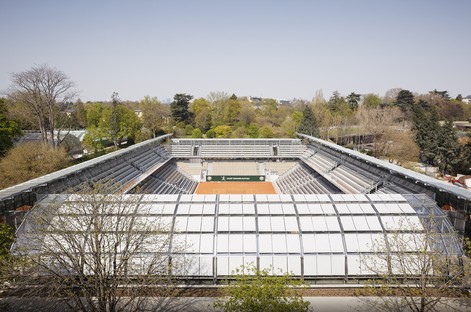 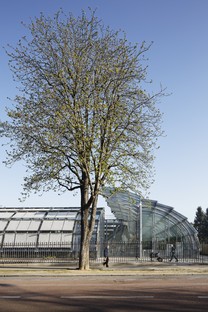 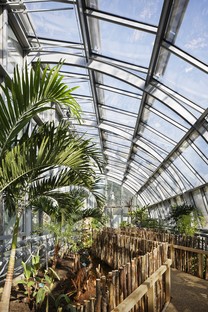 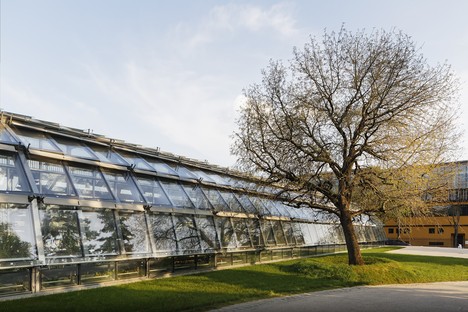 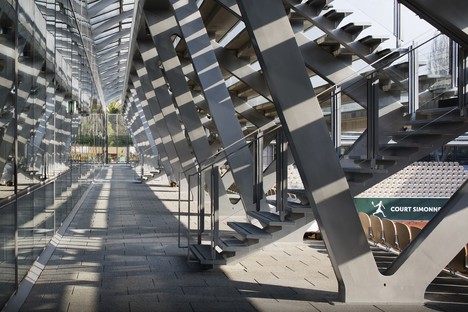 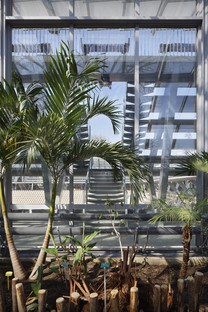 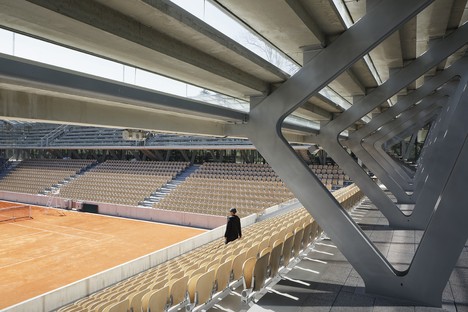 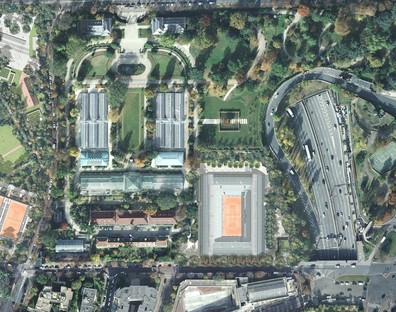 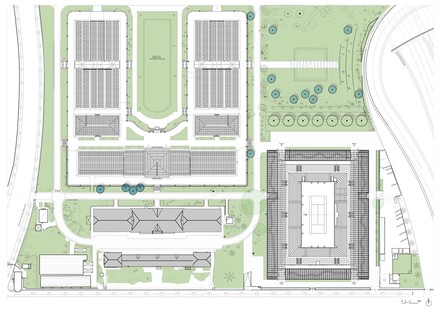 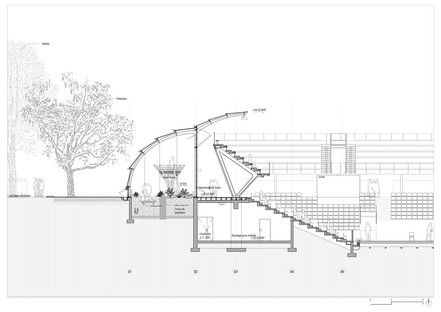 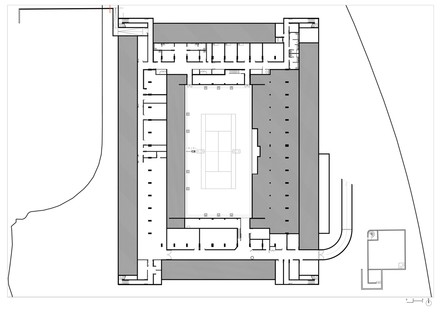 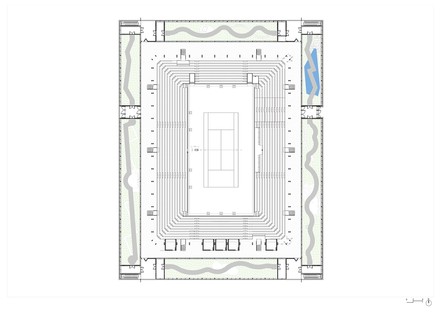 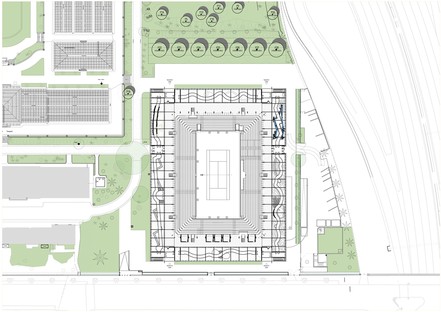