In the heart of Paris, architect Marc Mimram has created Panorama, a new geometric and light office complex, in which the existence of railway tracks running underneath has become the inspiration for an innovative solution capable of offering abundant freedom of design. 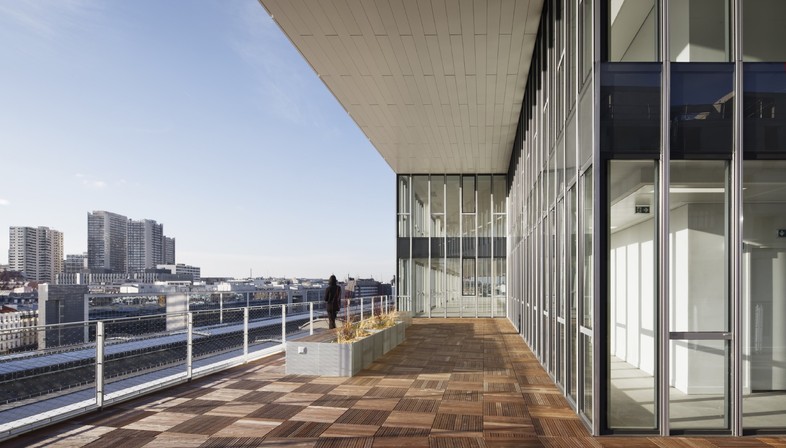 Panorama is Marc Mimram’s latest effort for the City of Lights. It is a large building that also serves as a bridge, connecting the two “banks” of the river of steel tracks that runs between the Avenue de France and the Halle Freyssinet. For an architectural work, this is not a place like any other. Panorama is located in the heart of Paris, in the 13th arrondissement, in a neighbourhood packed with other iconic buildings. One of its most notable neighbours, which cannot go unmentioned, is the National Library of France, designed by Perrault and opened in 1996, which is just across the road.
In the past, when it came to creating a railway crossing in other parts of the city, Parisian city planners always opted, wherever possible, to create a thick layer of reinforced concrete, strong enough to be able to build on it in the future, even without knowing what would be built there. At the same time, however, having a “compulsory foundation” such as this has always limited the options open to designers. That is why Mimram decided not to conform to the design standard, but rather to find an alternative which would allow him greater inventiveness and freedom in his work.
As such, the architect’s proposal approaches the problem from top to bottom, and not vice versa. Instead of installing the reinforced concrete layer - which serves as the roof for the railway tracks and platforms - on the ground, he opted to suspend the structure, hooking it to the combination building-bridge above. In order for this to be feasible, however, the weight of the building had to rest outside of the perimeter of the tracks.
The two large volumes on which the entire building’s structural load - namely 16,000 tonnes, including ??6,000 of steel - is concentrated are therefore positioned at a distance of 58 metres from one another, on either side of the railway rather than on top of it. And it is this design expedient that makes the creative and free use of the forms that make up the entire complex possible. The result is an interlocking geometric composition which conveys a sense of being clean, light and orderly, as per the principles of the contemporary high-tech style. In short, visitors find themselves faced with a large glass container from which four white parallelepipeds emerge, protruding outwards, each studded with square windows of irregular dimensions. Terraces, balconies, loggias and mezzanines become the compositional expedients to expand the working space, following the orientation and panoramic views.
The architecture firm said of it: “These arrangements are the result of previous constraints in the design of the bridge. The solution to the railway line problem sees the roof suspended over the tracks, rather than using a support platform that would have unnecessarily raised the cost of the project. In this way, the architecture gains a certain consistency and the supporting structure performs its function without attracting attention. There is no muscular ostentation, but rather the progressive unveiling of the construction.”
The concept of Stabilised balance best describes Marc Mimram’s latest work. Given the design constraints, the result could have been a massive, dense, imposing building, and yet instead, by studying how gravity affects the different blocks, Mimram created a harmonious set of elements rising out of the ground, giving a sense of stable balance.
The visual dialogue between the building and the city is an essential component of any architect’s idea. For Mimram, seeing and being seen creates a symbiotic echo with the surroundings, whilst the city, horizon, sky, light sources and orientation of the ground are the basic environmental conditions, the constraints which cannot be overlooked - in other words, the pre-established guidelines for the project.
In conclusion, Marc Mimram wants to suggest to those who design and build workspaces that they truly examine their starting conditions, trying to create advantages and freedom in the overall design, as well as using clever tricks of the trade to reduce costs. All this because, for him: ”The world of offices has become too heavily affected by standards and rules... We need to seek out opportunities to innovate and offer a variety of new, more flexible and diverse ways of working and workspaces.”

Pictures courtesy of the Studio 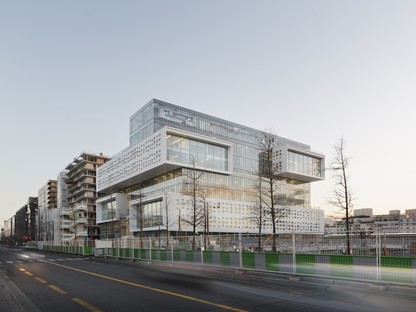 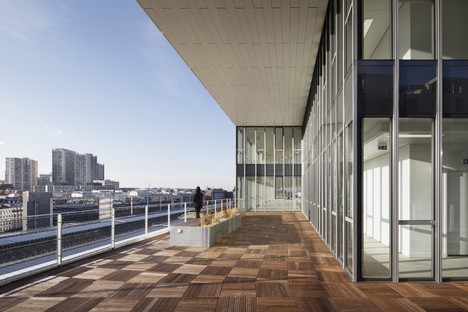 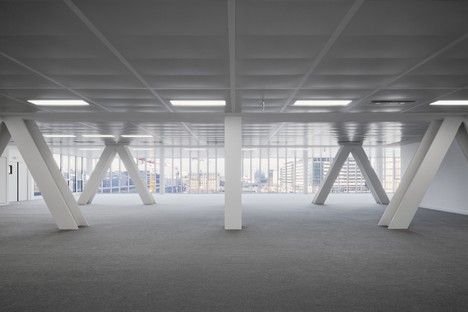 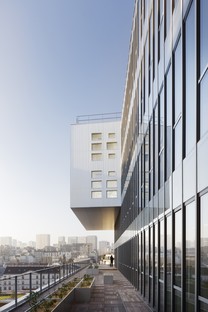 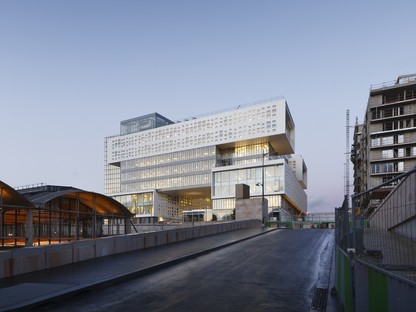 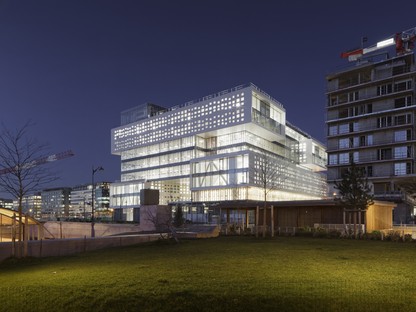 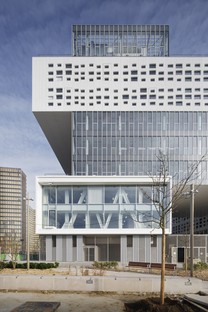 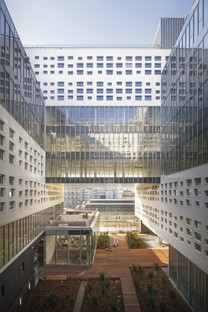 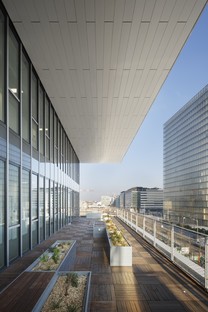 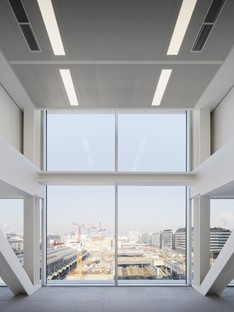 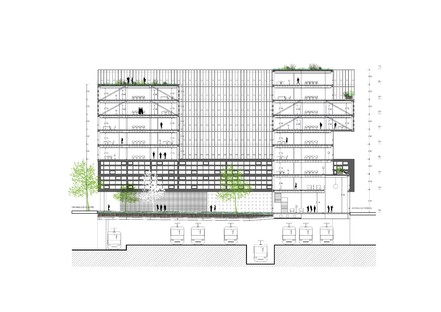 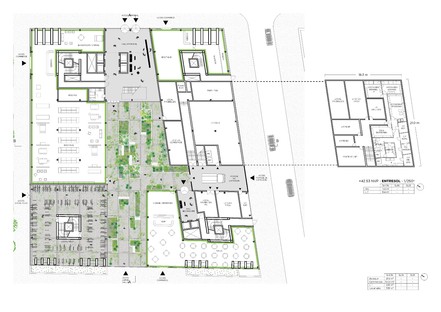 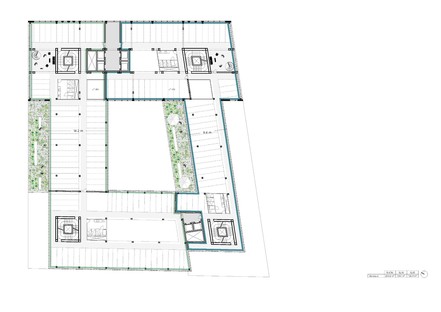 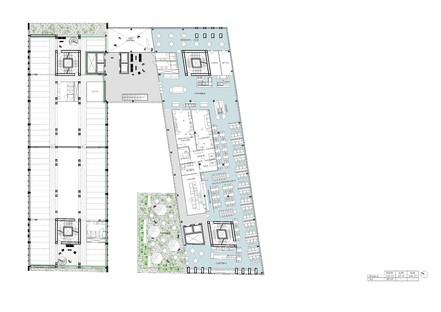