Architects Francesco Magnani and Traudy Pelzel from the MAP Studio recently unveiled the MPavilion 2021 project, the temporary pavilion commissioned from the Italian studio by the Naomi Milgrom Foundation. The pavilion will be built in the Queen Victoria Gardens in Melbourne, Australia. Between November 11, 2021 to March 20, 2022, the new structure will host a rich programme of free events and will subsequently be donated to the state of Victoria and moved and relocated to a new permanent home, where it will continue to serve the community. 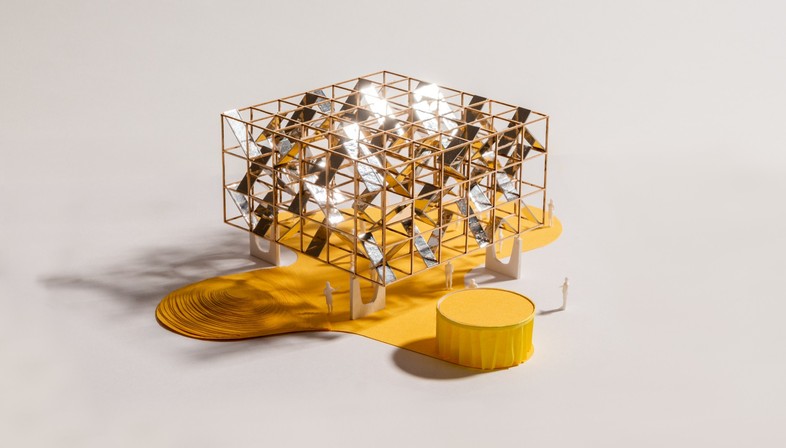 Every year since 2014, the Naomi Milgrom Foundation has commissioned major architectural firms to design a temporary pavilion. The structure, known as the MPavilion, is built in the Queen Victoria Gardens, in central Melbourne, Australia, and becomes the focus of a rich programme of city events held throughout Australia’s summer season.
The Venice-based MAP studio, founded by architects Francesco Magnani and Traudy Pelzel, were originally commissioned by the Naomi Milgrom Foundation to build the 2020 temporary pavilion. Subsequently, due to the prevailing travel restrictions imposed by the Covid-19 pandemic, the initiative was postponed for a year and finally, on July 22 the project for the new MPavilion 2021 was presented, a temporary structure that will host the city’s events scheduled to take place from November 11 of this year to March 20 of next year.
During the six previous editions of the initiative, the temporary pavilion was designed by a diverse collection of international architects: architect Sean Godsell of Sean Godsell Architects in 2014, architect Amanda Levete of AL_A in 2015, architect Bijoy Jain of Studio Mumbai in 2016, the OMA / Rem Koolhaas & David Gianotten studio in 2017, architect Carme Pinós of Estudio Carme Pinós in 2018 and architect Glenn Murcutt in 2019.
All the projects completed so far share a common thread: the pavilion constitutes an interesting experiment in temporary architectural structures, becoming a powerful cultural attraction, as well as a landmark of Melbourne’s creative and dynamic quality. A task that will also be performed by “The Lightcatcher”, the pavilion designed by the MAP studio: a geometric, kaleidoscopic structure that will light up the Queen Victoria Gardens, an urban lighthouse that illuminates and attracts the city’s citizens thanks to the diverse program of free cultural activities hosted.
To create this “abstract” geometric lantern, the architects designed an intricate reticular and modular steel structure, consisting of painted tubular profiles supporting aluminium panels. The basic module is a 2 x 2 x 2 m cube, which will be used to configure a pavilion with a square base measuring 12 m per side and 6 m in height. The resulting volume is raised from the ground thanks to prefabricated reinforced concrete supports with a special U shape. Inside, the structure will define a 64 m2 hollow space, standing 6.4 m high from the ground. Around the central void, metal panels will be arranged inside the module, which will give dynamism to the structure and allow it to change throughout the day. The panels, in fact, will become mirrors ready to reflect light and different weather conditions, as well as the people and the rich programme of activities that will take place in or around the pavilion.
Indeed, the structure will become an outdoor stage where people can attend cultural shows and events. The structure’s function will be supported by a small circular kiosk, a technical room where furniture and seating used for the events can be stored or where other specific activities can be carried out.
Everything has been conceived relying on prefabricated components that can be easily disassembled and reassembled. In fact, at the end of the summer programme the temporary structure will be donated to the state of Victoria and moved to a new, permanent location where it will continue to service of the community, as was already the case with the initiative’s previous pavilions. The MPavilion 2017 architecture designed by the OMA, for example, hosts the events of the Clayton Campus at Monash University, while the MPavilion 2014 by Sean Godsell Architects was subsequently modified and installed in the Hellenic Museum area in central Melbourne. 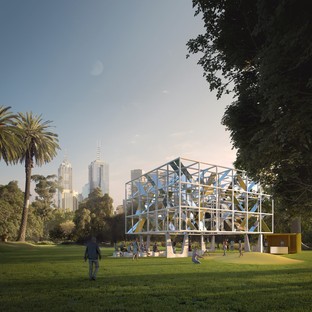 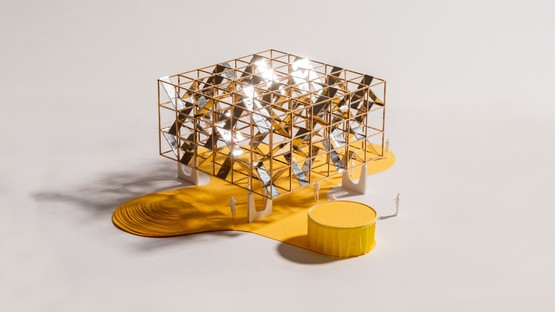 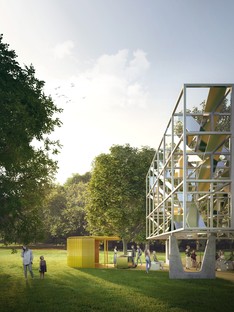