Architect Manuelle Gautrand and her firm have designed two new hotels for the Marriott brand on the site of Paris' Charles de Gaulle Airport, in an area called "Pôle Hôtelier", that will house several hotels and office buildings under the airport's development and renovation plan. 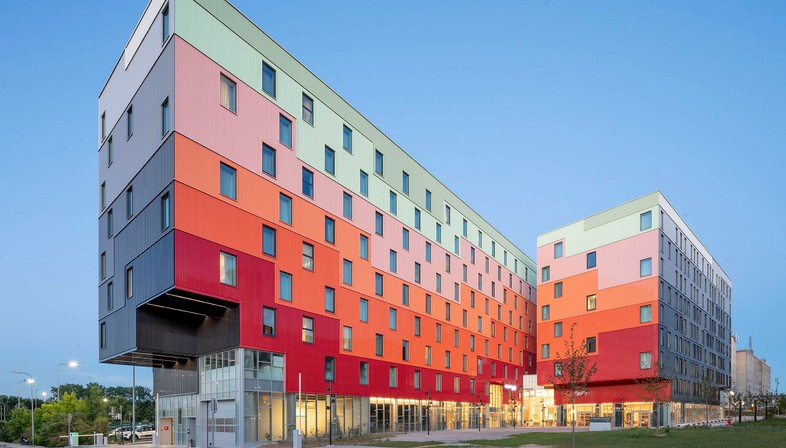 In Roissy a renovation and development plan is underway for Paris-Charles de Gaulle Airport, one of the largest and most important airports in the world. This also includes the recently completed project by architect Manuelle Gautrand and her firm for the Marriott Group. These are two new hotels built in an area called "Pôle Hôtelier," which will house several hotels and office buildings under the airport development plan. The various projects will be carried out along an urban axis that will also be equipped with a tram line and bicycle lanes. All of this is set in a large green area, an arrangement that is expected to be attractive and lively for passengers in transit or arriving at the airport. The plot earmarked for the project by Manuelle Gautrand Architecture is located on the eastern edge of the large urban axis, just before the taxiway used by planes taking off. The project is therefore clearly visible from all directions, and the architects ensured that its façades could provide an interesting visual impression depending on the perspective from which they were viewed by pedestrians, planes and cars.
The architects were asked to design two hotels for two different and independent brands. Consequently, two separate volumes have been conceived, built one behind the other, but interlocking in a single basement where a number of common spaces are located. The larger volume located in the southern part of the plot is the Courtyard Hotel, while the smaller one in the northern part is the Residence Inn. The two hotels actually form a single building made up of two volumes, a solution that made it possible to achieve a lighter architecture rather than a single, compact building block. The architects gave each hotel its own visual identity. Both buildings are set along the east-west axis, but they are not perfectly parallel. The slight inclination between the two volumes makes it possible to create a series of perspectives and plays of reflections, as well as a common space used as an outdoor terrace for the shared restaurant and as a small square that extends the public space of the nearby urban axis.The façades play a key role in the design, and openly state the purpose of the interior spaces to the outside world. In the lower part of the façades, the architects chose the transparency of glass to define the common areas by visually opening them up to the outside world. In the upper part, however, the room façades are clad with lacquered and coloured aluminium panels in gradually lighter hues, creating plays of reflection between the two buildings, and allowing the colours of one flow into the other. The colours of the panels differ according to the position occupied by the façades. For those along the outside of the lot, a relatively neutral and more discreet black-white gradient was chosen. Inside the lot, on the other hand, almost unexpectedly, the colour gradient appears with bright and vivid tones, meaning that guests feel a distinct change. 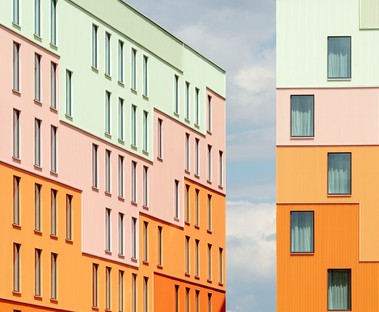 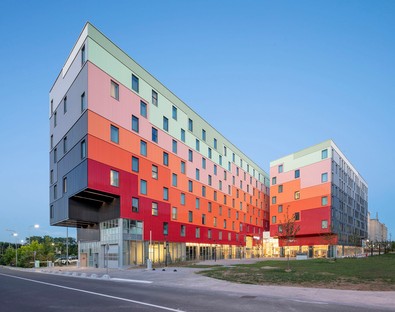 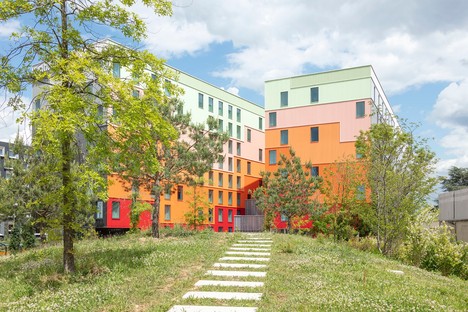 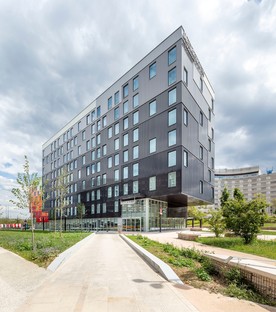 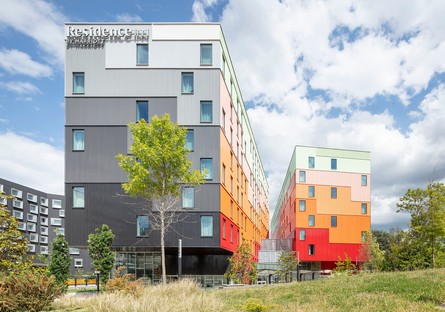 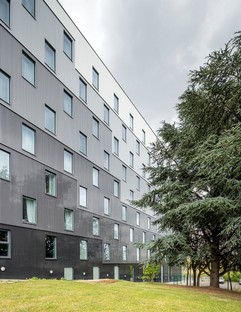 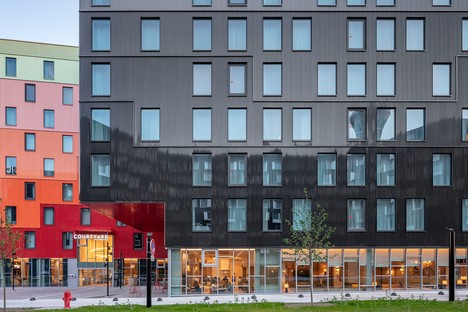 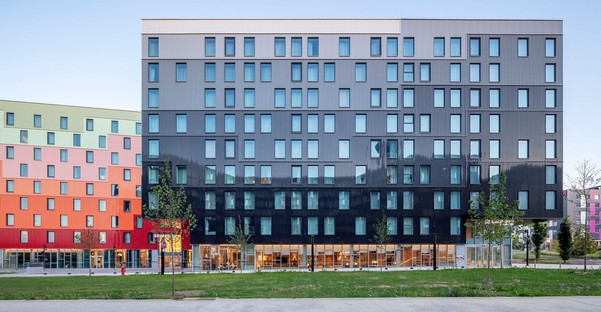 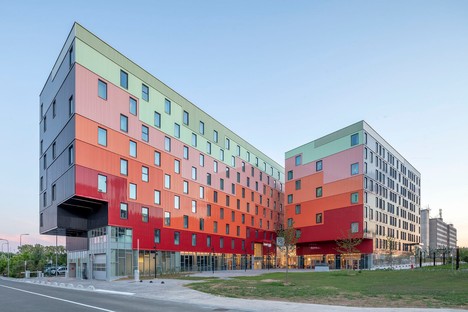 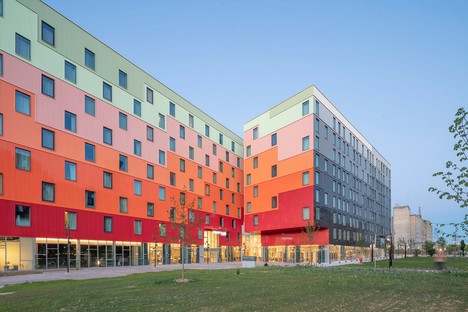 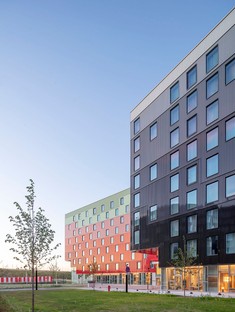 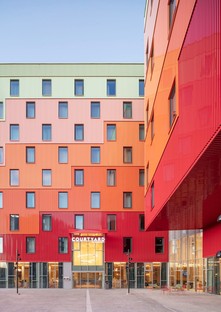 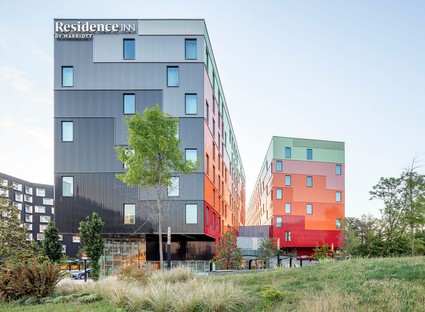 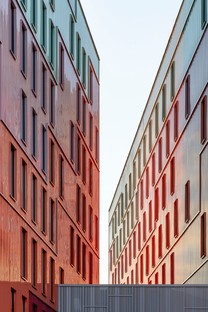 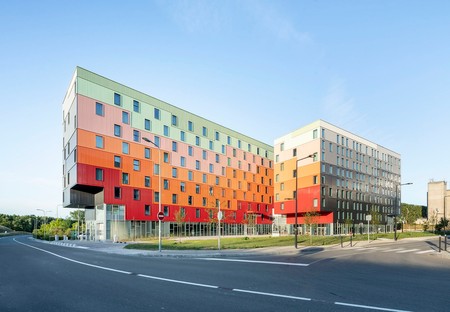 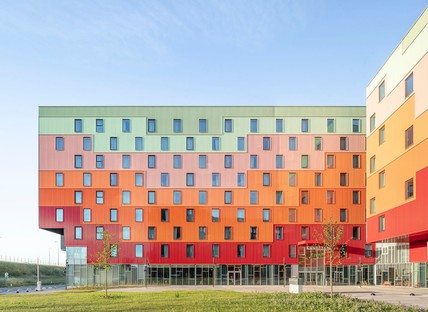 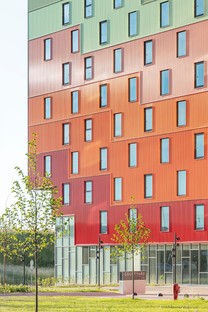 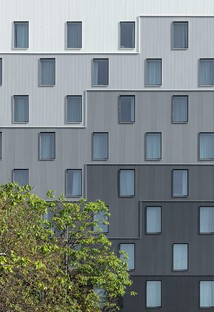 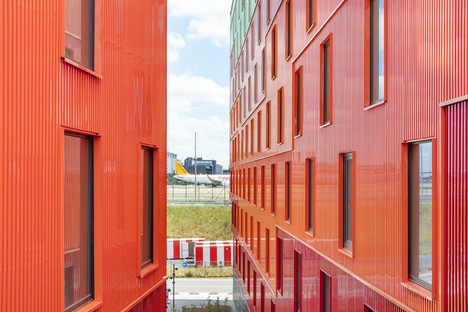 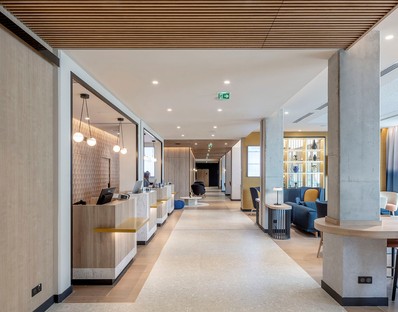 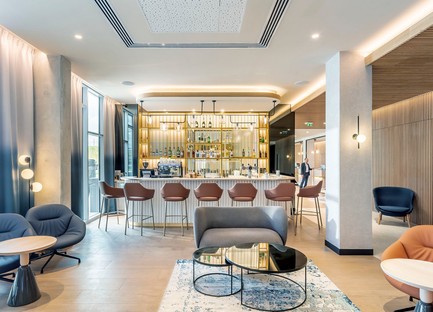 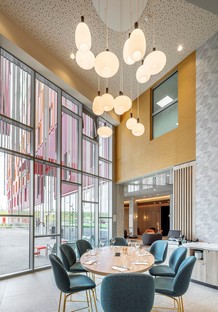