Kengo Kuma’s V&A Dundee due to open in September

Scotland’s first design museum is due to open on September 15, 2018, designed by Japanese architect Kengo Kuma, who first visited the completed construction on February 9.

The V&A Dundee museum building has been completed. Architect Kengo Kuma went to see the completed construction on February 9. The museum is due to open on September 15, and so the work is now continuing inside the building: setting up the galleries, installing the exhibits and completing other museum functions, such as the cafeteria. 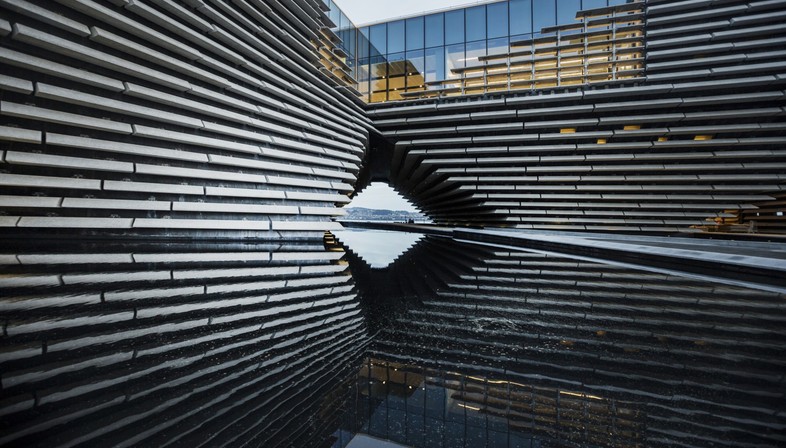 Heralded as Scotland’s first design museum and the only V&A outside London, the V&A Dundee will be an international design centre hosting international exhibitions and permanent galleries about Scottish design. The Scottish Design Galleries will be curated in partnership with the V&A in London, and will contain about 300 items from the London collection and from other museums and private collections in Scotland and all over the world: a wealth of exhibits covering all fields of design, from architecture to ceramics, from engineering to fashion, also including furniture, jewellery, fabrics, videogames, items for healthcare and personal care, etc. They will also include items linking the museum with architect and designer Charles Rennie Mackintosh.
The V&A Dundee will pay homage to the Scottish architect and designer by including in its permanent collection a faithful reconstruction, containing original elements, of his Oak Room in Ingram Street, Glasgow.
The Oak Room was one of the tearooms designed by Charles Rennie Mackintosh in the early twentieth century for Glasgow entrepreneur Catherine Cranston, a tearoom on two levels which stayed open until the 1950s. In 1971 the tearoom interior was taken apart and put into storage, broken up into hundreds of pieces, which are now being reassembled for the first time to be put on public view. The museum’s collection will also include other historic items, but this doesn’t mean the museum will “crystallise” the history of the discipline of design, for it is also intended to showcase the present and future of design and its impact on everyday life.
A place of discovery and education, hosting installations by emerging designers and projects developed as part of a public education programme. 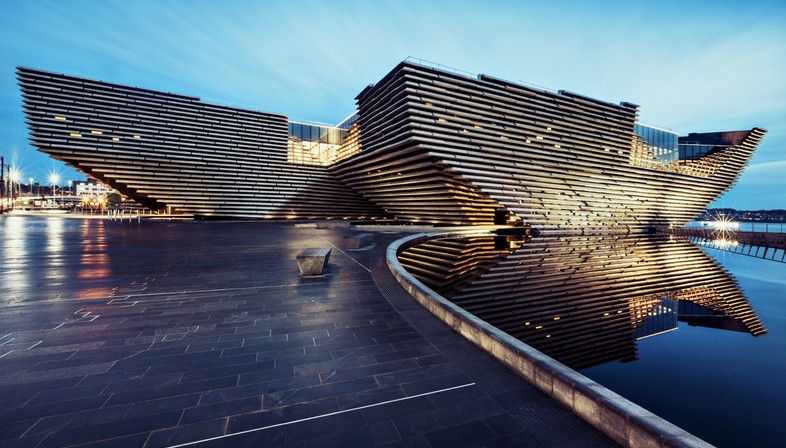 The V&A Dundee is the first British project by world-renowned Japanese architectKengo Kuma , whose recent projects include Tokyo National Stadium for the 2020 Olympics. The architect designed the museum to be a landmark on the waterfront, an element mediating between the natural and the artificial that will become a living room for the city, a welcoming space open to the public.
The museum project is part of a wide-ranging plan for transformation of the Dundee waterfront, the city’s docklands, into an important urban landmark. Kengo Kuma drew his inspiration from the rocky east coast of Scotland in creating the building’s complex geometry: a jagged surface of concrete and rough stone slabs on the River Tay. The museum becomes a reference in the landscape and an architectural element joining the city to its historic waterfront. 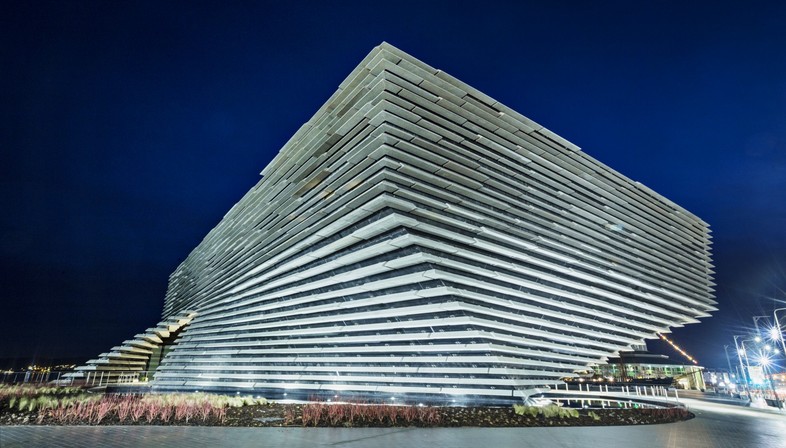 The opening exhibition, “Ocean Liners: Speed & Style”, focuses on the golden age of transatlantic ocean liners. The product of a partnership between the V&A in London and the Peabody Essex Museum in Salem, the exhibition will include numerous artefacts (including paintings, sculptures, vintage photographs, furnishings, etc.) with a general focus on the design of these giant oceangoing vessels, with models of historic ships. 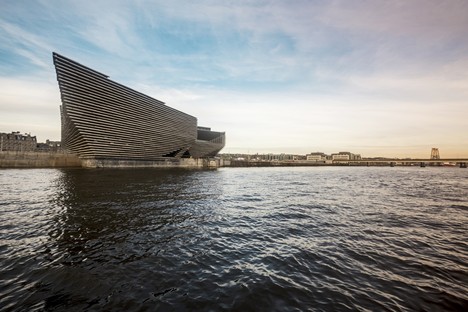 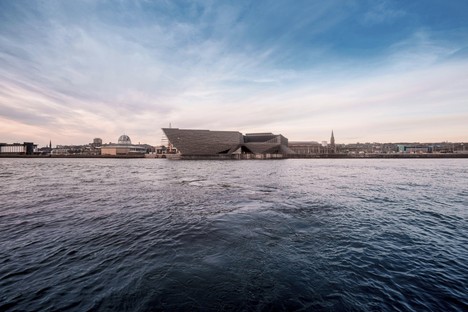 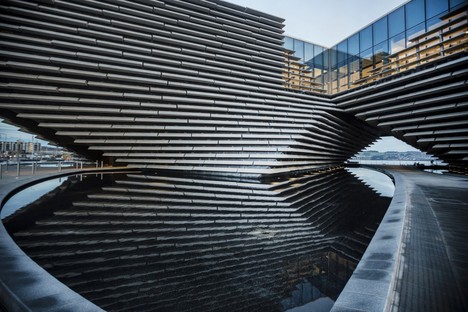 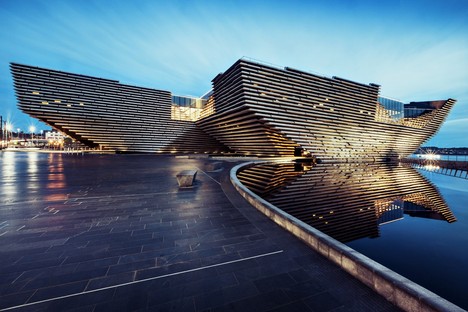 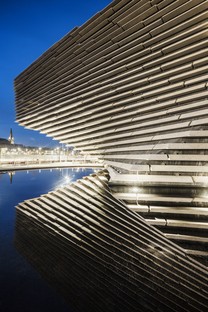 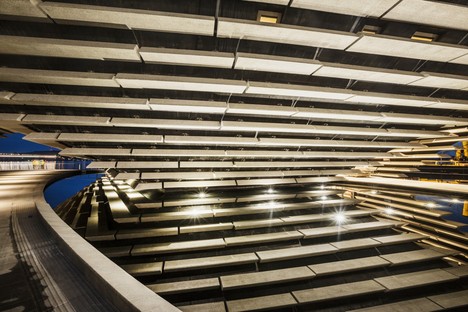 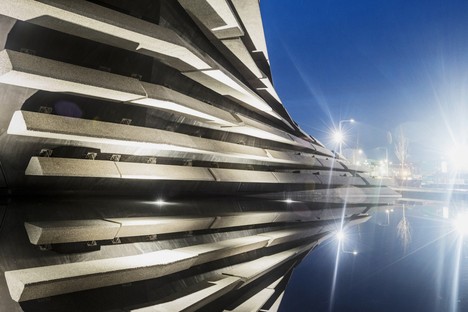 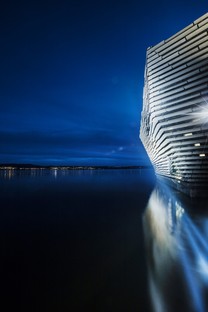 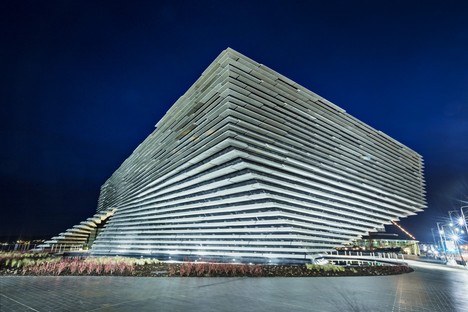 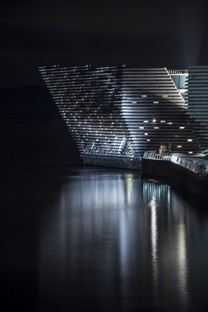