Materials from the earth and the architectural detail of the arch are the key elements in Jorge Vidal and Víctor Rahola’s project in Mont-Ras, Catalonia: a winery that is partially underground, halfway between the house and the vineyard. 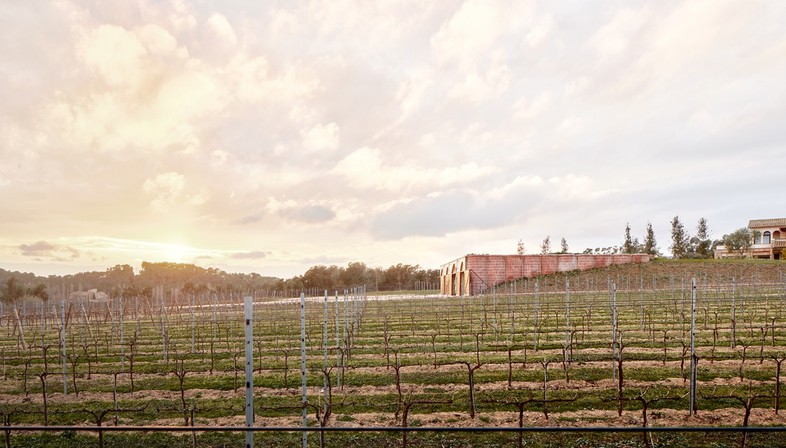 The winery in Mont-Ras, Catalonia, Jorge Vidal and Víctor Rahola’s last project after nine years of working together, is a building that is all about geometry and symmetry. A great sense of order reigns throughout the entire project, producing a feeling of serenity; the feeling we get when surrounded by nature, whether wild and unbounded or tamed by loving human hands.
This is the philosophy behind Vidal and Rahola’s winery project, in which the component of human regeneration by nature and use of architecture to mirror a landscape that yields good fruit are the basic underlying principles.
In this case, the building is a facility for making wine, which is itself a fascinating topic, thanks to its image in art and literature, even for those who don’t drink wine; but for people who do appreciate wine, or even construct their lives around it, like the owners of the winery, it brings to mind a long list of associations of great interest to the architects.
Vidal and Rahola drew their inspiration from the actual experience of making wine and the slowness of a process that is conducted in stages, a process that has been known to humanity for a long time but continues to be fine-tuned and perfected. The need for patience and dedication has led to association of wine with the concept of protection, which, in architecture, translates into a partially underground structure positioned on a site midway between the owners’ home and the vineyard. It is therefore located halfway between the two complementary poles of the family’s life, the home and the field, the place of rest and a place of work, inside and outside, protected and sheltered in the middle of everything.
Continuing to reason along these lines, the building is “in the middle” because the architects decided to build it partly open and partly covered, partly exposed and partly hidden, partly toward the sky and partly under the earth.
This is the first element of symmetry: the winery is set halfway down the slope from the owners’ house down to the vineyard, sloping from north to south, so that the building is largely covered by soil, emerging with its gracious geometric shape toward the south, where it overlooks the grapevines. A tunnel, also underground, discretely links the house with the wine cellar.
The protection afforded by the soil is not merely psychological, it is scientific, connected with the humidity level required for the production and storage of wine.
The layout on a single level is organised into four main sectors, with three secondary ones between them: starting from the west, toward the vineyard, we have the machinery storage shed and the loading and unloading area, then the place where must is fermented and aged in barrels in the middle, followed by an area which is not strictly for production but which the clients wanted to build for wine-tasting, viewed as an important social event.
The darkness created by the underground structure is an important factor in winemaking, like the level of humidity, which is why the central parts are almost entirely in the dark. After all, the amount of light required for internal movement of machinery, instruments and products is captured by the building itself and conveyed into the areas where it is needed by the vaults around the building’s perimeter.
The most interesting detail in the entire brick structure is in fact a succession of perimeter vaults rising vertically, arranged along the eastern and western walls, which not only contain lateral force exerted by the soil but let in light from above. The same feature also appears on the northern façade, where the vaults bring light into the four main parts of the winery. The moderate closure of the three sides described is counter-balanced by the southern façade, on which four big wooden sliding doors can be opened up to offer views out over the vineyards. Above them, rotating half-moons allow the amount of light to be controlled when the doors are closed.
Order and symmetry are ensured by a number of recurrent elements: the arch, either vertical or horizontal, the regular internal rhythm with functional variations, and the perspective created at various points of transition.
In terms of materials, brick, commonly used in local architecture, and wood are combined with the concrete of the central pillars and the roof, a vaulted structure which supports a garden and also serves for collecting rainwater. All the materials are left visible, without any covering or paint, as if Vidal and Rahola wanted to reach a sort of agreement of sincerity with the earth and the plants, without worrying about the passage of time and the ageing of human work. 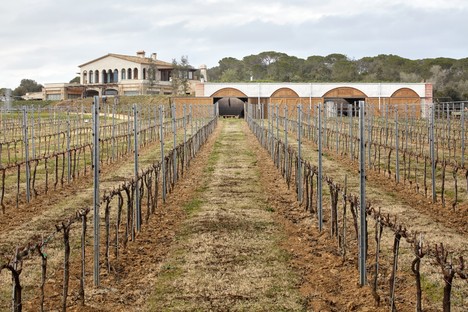 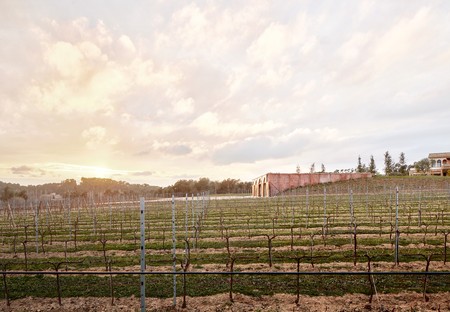 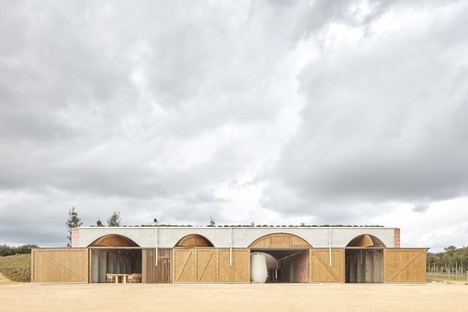 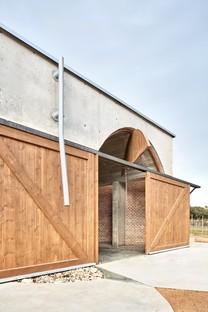 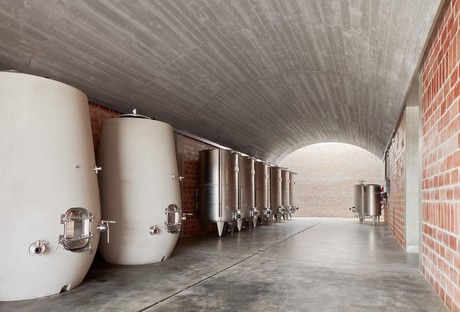 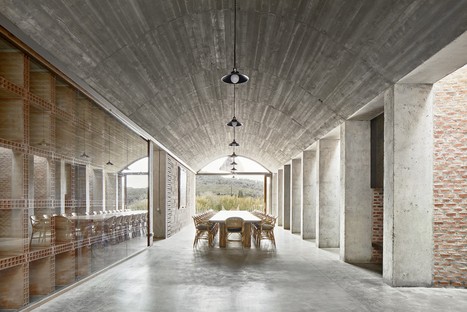 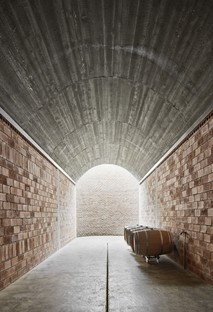 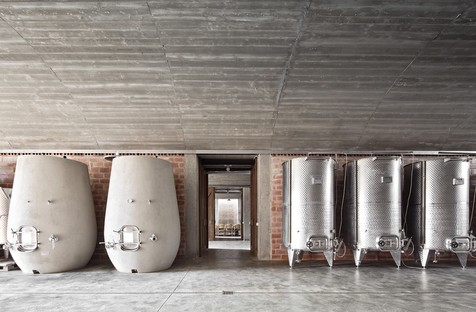 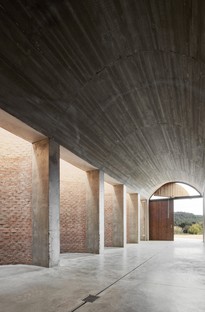 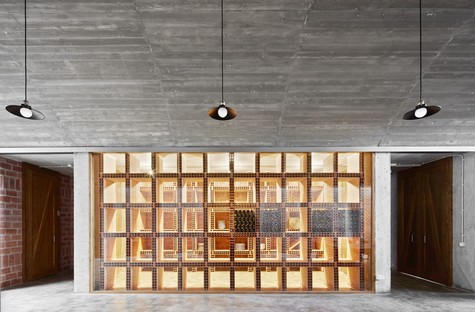 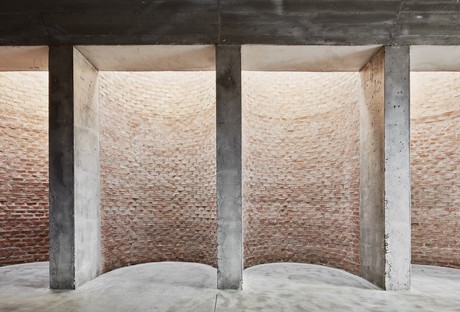 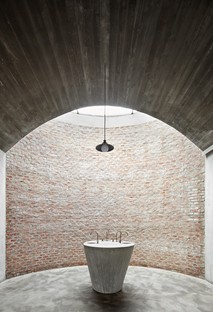 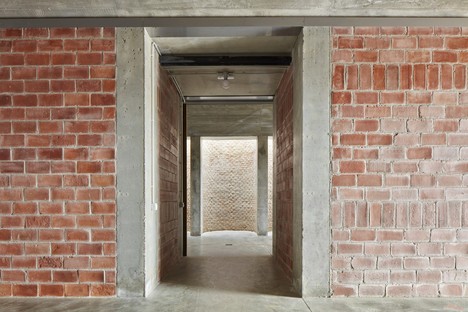 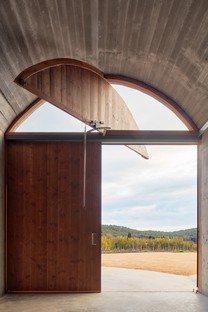 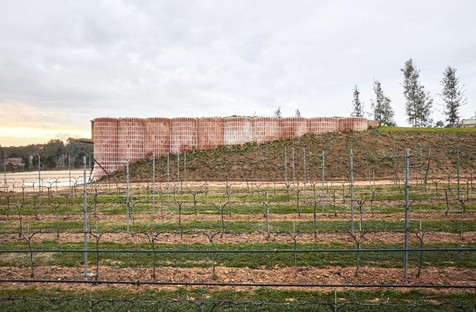 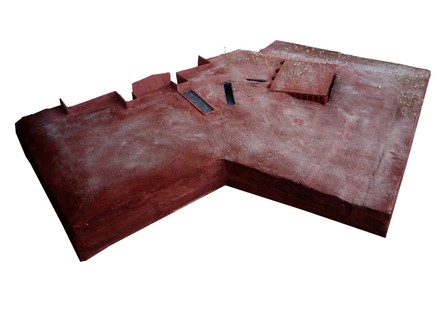 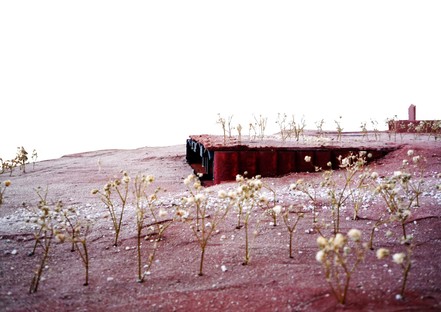 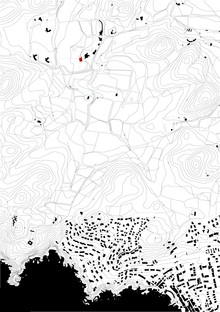 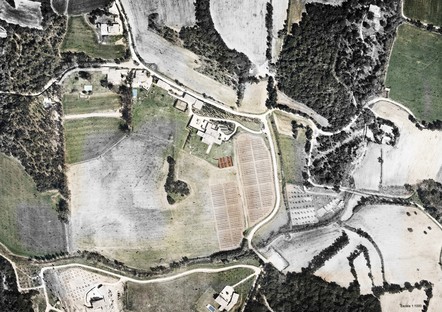 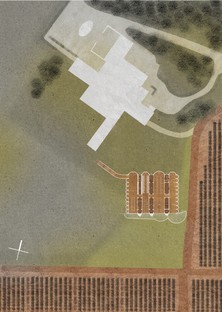 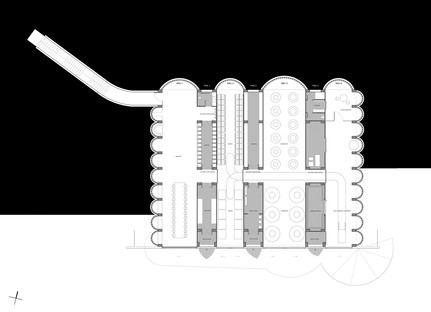 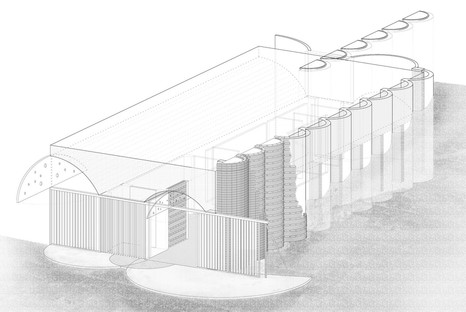