The Retina home designed by Arnau Vergés i Tejero is a very delicate project on hilly land in the countryside outside Santa Pau, near Girona. Arnau estudi d’arquitectura interprets the Retina house as a way of establishing ties with the land by creating a place for contemplating the landscape. Arnau Vergés i Tejero, founder of Arnau estudi d’arquitectura, a small architectural studio in Girona, has completed plans for the Retina house, a small rural home in the countryside outside the village of Santa Pau. Arnau Vergés i Tejero’s work stands out for its ability to bridge gaps in its setting, whether it be urban, as in the house between the walls in Vidreres, or rural, as in the case of the Granjardì farm in Vall d’en Bas. This concept of connection goes beyond the act of filling in voids, closing spaces or circumscribing areas to limit and subdivide properties, creating links that lead to analysis of a place, its history and traditions, and seeking to relate the architectural gesture to the experience, even while observing the characteristics of its moment in history.
The Retina home is profoundly contemporary in form and function, such as its concrete block composition and the organisation of the rooms inside the building, with a free layout and fitted walls. But the project also demonstrates attention to and observation of its context: wooden shutters open up to create five big glass floor to ceiling “eyes” on the building’s southern wall. The home consists primarily of a single floor that simply contains and organises the minimum functions of sleeping, eating and communicating. The gesture made by the design is inclusion of this volume, a regular parallelepiped, closed on three sides and open to the south, like the head of a body, in continuity with the rural landscape.
Small Catalonian villages such as Santa Peu still have a very small historic centre surrounded by farmland and farmhouses. Living density is reduced in this subdivision of the land, while maintaining a very close relationship between the parts. The concept of neighbourhood is still strong, and the houses face one another, address one another and are grafted onto one another, sharing the streams, ditches and woods.
The Retina house stands on gently sloping land on which a flat area has been created, bounded and surrounded by a country road and a stone containing wall. Two parallelepipeds overlapping to form an L shape form a centre for living which becomes a place, creating a context within its own context while remaining open to the world outside, which becomes the “body” of this “head”.
When the shutters are open, the building is reduced to glass walls, becoming one with its own “eyes”. When they are closed, the volume reveals the influence of the rural farm shed, such as the one designed by the architect for renovation of the Granjardì farm, establishing a relationship with the past.
The east-west oriented volume containing the living area, bedrooms and utility areas is at ground level, while a secondary volume with a north-south orientation, connected with the garage, is partially underground and contains the swimming pool. The building material is bare concrete, on which the patina of time and the proximity of the earth will imitate the colours of nature. This contact is limited on the northern side, however, by a high containing wall cutting across the slope, isolating and protecting the main entrance of the home. This is the start of a walkway that wraps around the lot, first with a concrete staircase down to the lower courtyard with the entrance to the garage, and then with a second wooden staircase up to the level of the house and the garden above, reaching the tree that marks the conclusion of the path and the home’s first visual horizon.
Inside the house, every single action is accompanied by contemplation of the place created. The northern wall is completely filled in by a wall fitted with utility and storage facilities. On the opposite side, however, the big sliding glass doors ensure constant interaction with the greenery and encouragement to look farther away in everyday life. And beyond the first visual horizon, bounded by the wooden walkway and the solitary tree, the eyes gradually penetrate the more distant landscape of cultivated fields, where farmers can still be seen at work in their vegetable patches and orchards. 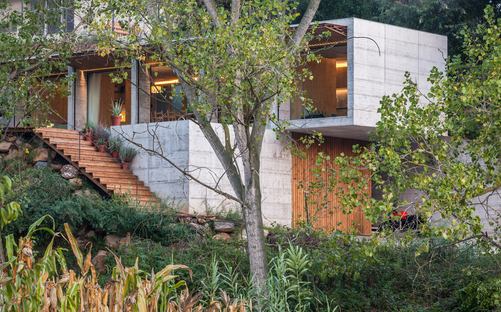 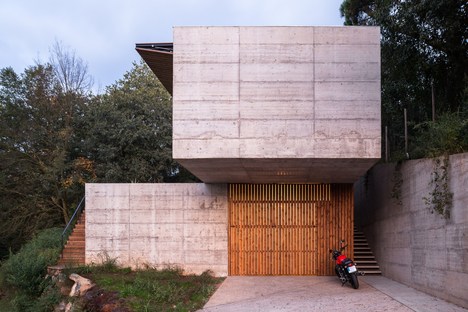 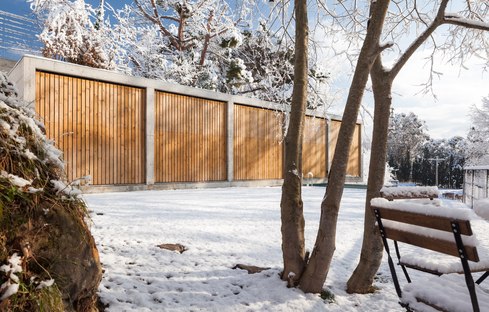 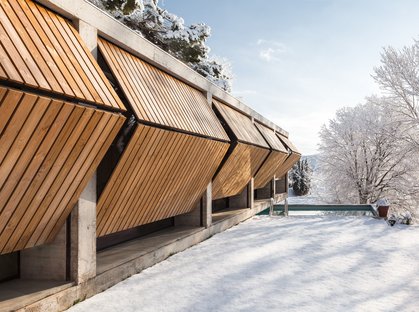 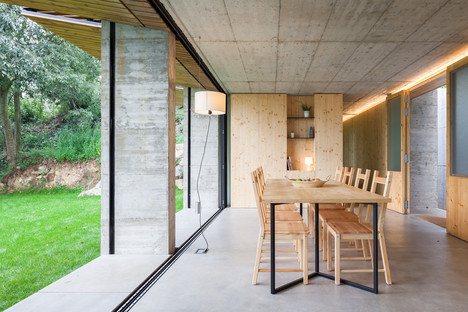 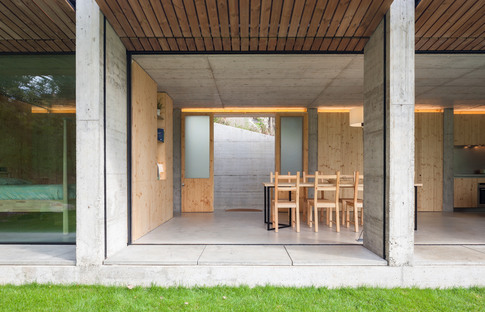 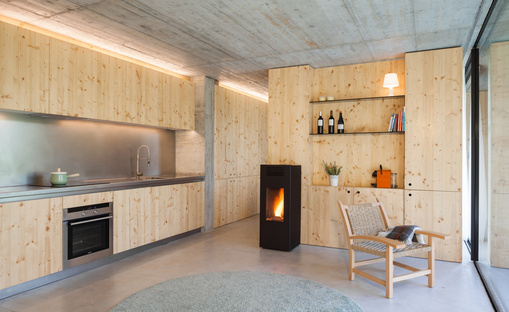 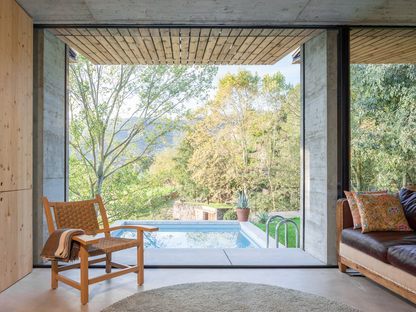 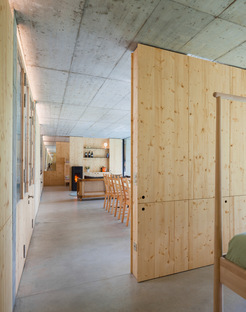 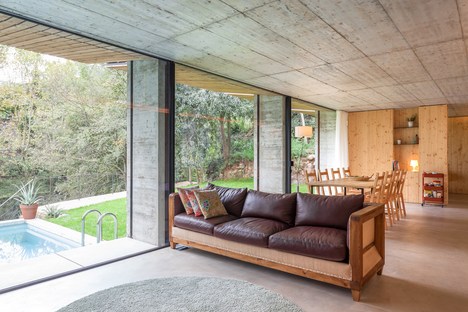 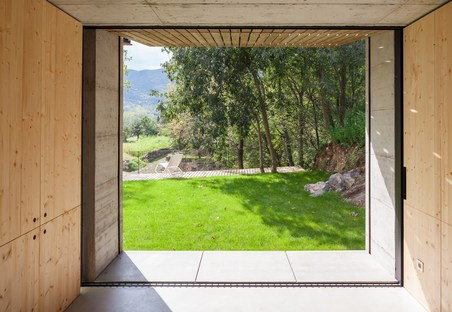 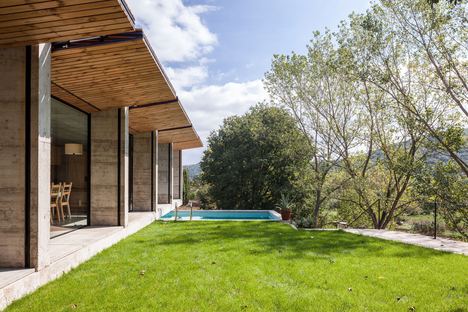 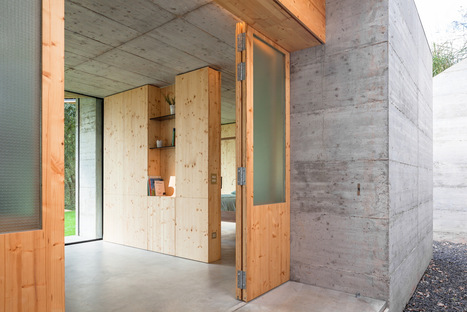 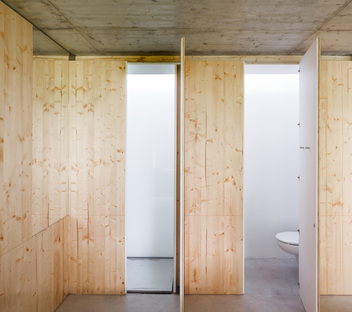 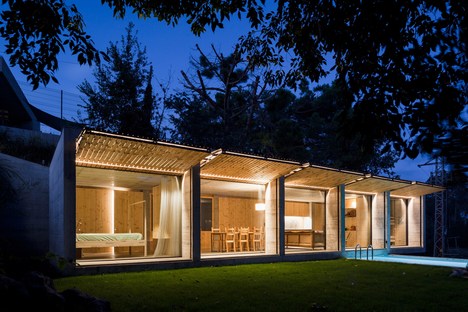 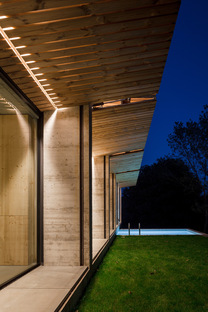 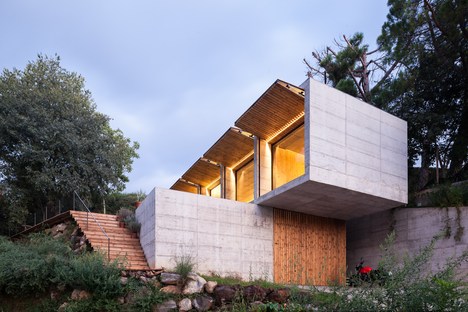 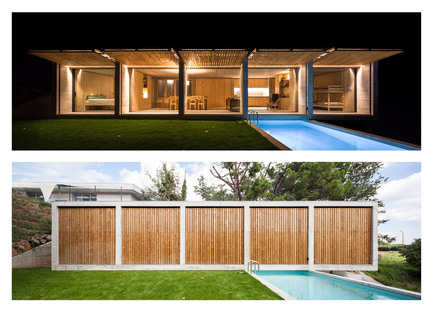 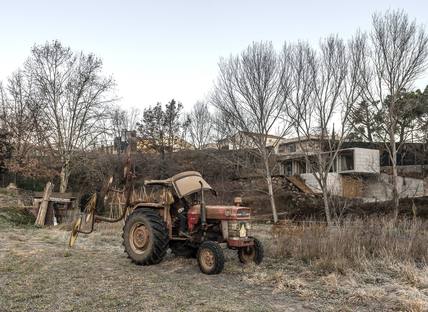 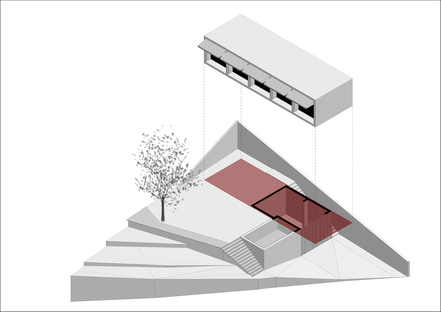 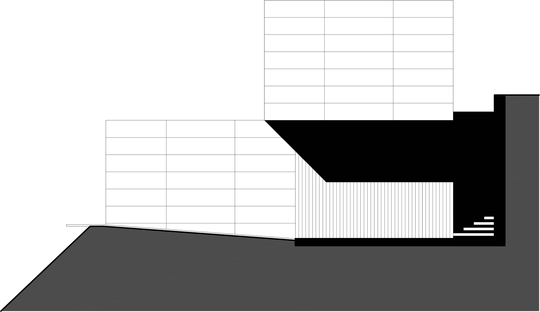 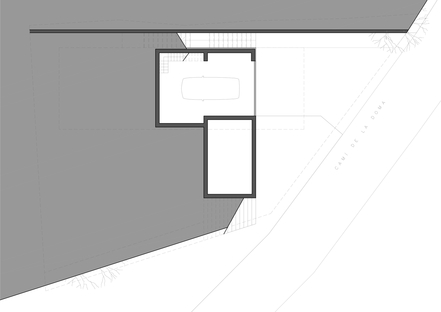 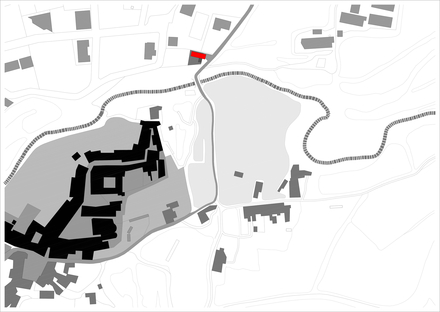