The architect Dorte Mandrup was recently awarded AW Architekt des Jahres 2019 (AW Architect of the Year) by AW Architektur & Wohnen Magazine, Hamburg. For the first time, from August 16, 2019, the magazine in collaboration with the Aedes Architecture Forum presents a comprehensive exhibition in Berlin, on the work of the Danish architect and her design studio. 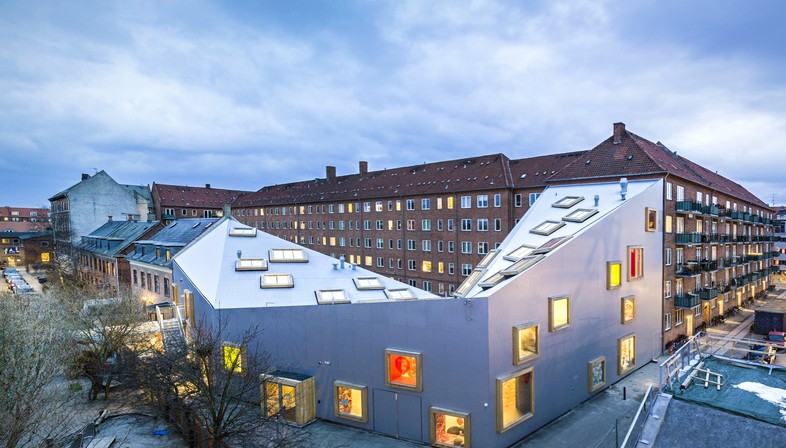 Since 2012 AW Architektur & Wohnen Magazine, Hamburg has awarded the prize to an architect or practice for outstanding performance during the year. Previous years’ prize -winners have included Dutch studios MVRDV and UNStudio, Danish studio BIG, German studio Gerkan, Marg and Partners (GMP) and Mexican architect Alberto Kalach. The 2019 AW Architekt des Jahres prize was awarded to Danish architect Dorte Mandrup from Copenhagen. To celebrate the over 20-year career of the Danish architect, on August 16 a comprehensive exhibition of the architect's and her studio’s work opened for the first time in Berlin, organized by AW Architektur & Wohnen Magazine in collaboration with Aedes Architecture Forum. 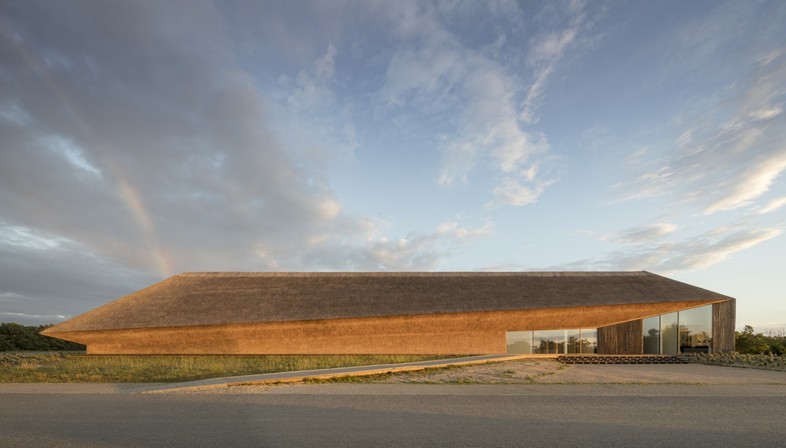 The exhibition “HUMAN:NATURE” presents and illustrates the Danish architect’s body of work through various mediums, such as photographs, scale models and videos. For over twenty years, Dorte Mandrup has designed significant, engaging architecture, emphasizing its strong interrelation with nature and the demands of mankind’s lifestyle on the contemporary environment. The modus operandi of the architect is based on meticulous attention to the project’s relationship with the natural and urban surroundings. In other words, the whole surrounding environment in its broadest sense including the natural and urban landscape but also the human community. In particular, the exhibition highlights this “humanistic” approach to the discipline in which architecture is always considered part of the bigger picture.
“We all have a responsibility to create a better future and to tackle the issues of our time. We must endeavor to question the status quo, dare to experiment and take a chance on the alternatives. We believe our greatest responsibility is to transform ideas into major yet achievable projects." Dorte Mandrup’s words are immediately reflected in projects developed for the Wadden Sea Trilogy. This national park is unique in its genre since it stretches into three countries (Denmark, Germany and the Netherlands) and is one of the most important coastal areas in the world. The delicately-balanced surroundings, a UNESCO World Heritage Site, where the architect’s project is aimed at increasing the visitors’ and, indeed, world’s awareness of this majestic, fragile landscape. 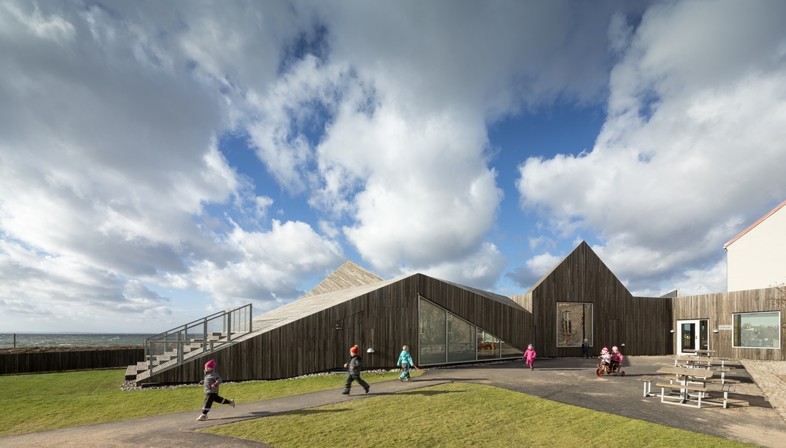 The exhibition also focuses on Dorte Mandrup’s projects which promote communities and relationships, including two prime examples where the two projects were previously featured in the pages of Floornature. The first is the Sundbyøster Hall in Copenhagen, a multi-purpose building which combines a sports center, 12 apartments and food hypermarket. A project where architecture has provided an answer to issues in the bedroom suburb, creating a new urban destination that has quickly become a landmark for the region.
The second is Råå Preschool in Helsingborg. Here, the architect designed a pre-school in line with the principles of creative play, interpreting its historical and cultural surroundings. The result is a contemporary building that blends into the surrounding landscape, referencing the landscape yet not lapsing into vernacular architecture. 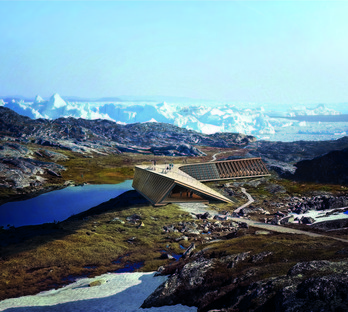 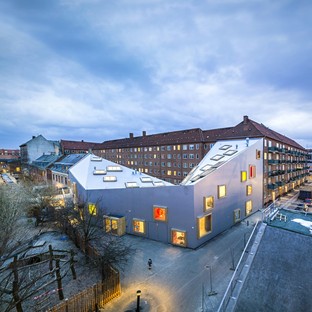 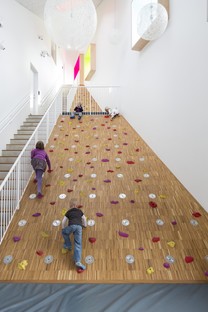 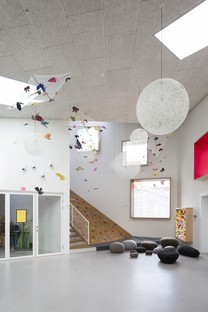 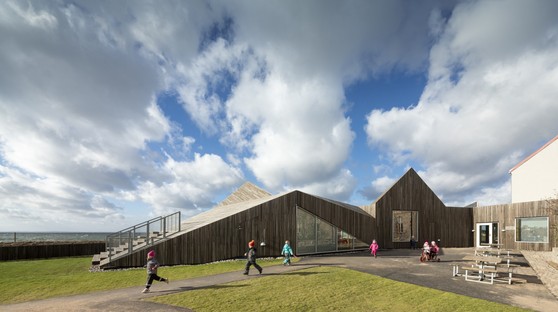 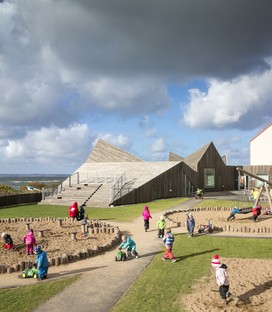 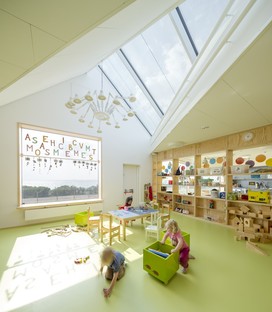 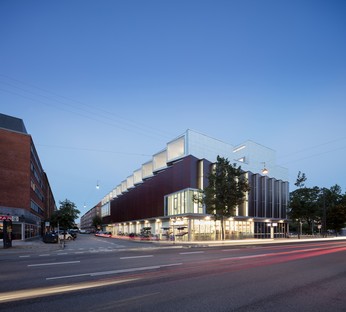 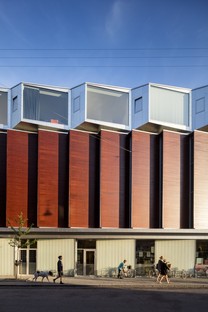 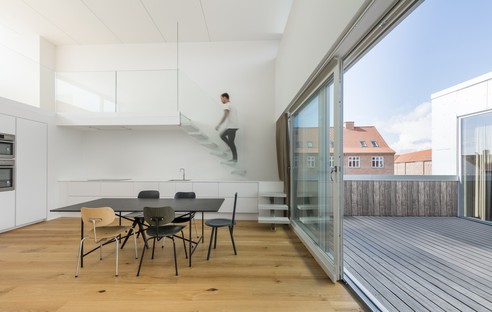 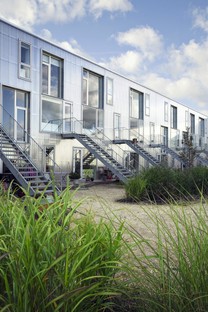 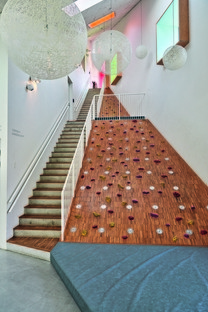 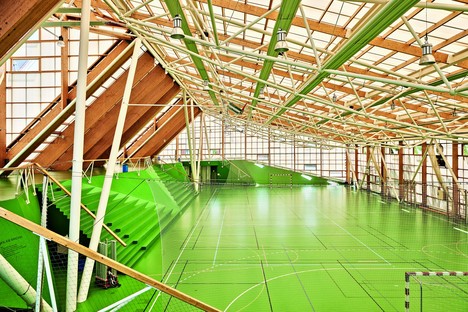 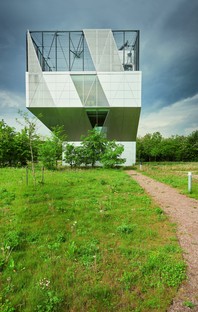 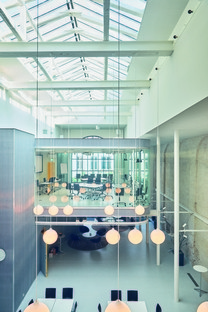 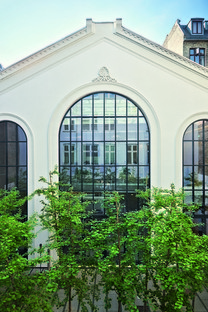 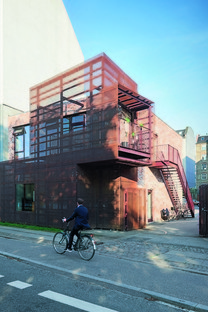 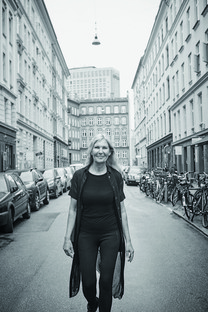 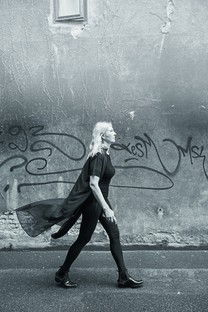