Architect He Wei restored an industrial building in Beijing and made it into a Zen & Tea Chamber. In view of the continued importance of places of this type in the east, He Wei opens up the building for dialogue with the street, making the Zen & Tea Chamber into a landmark. 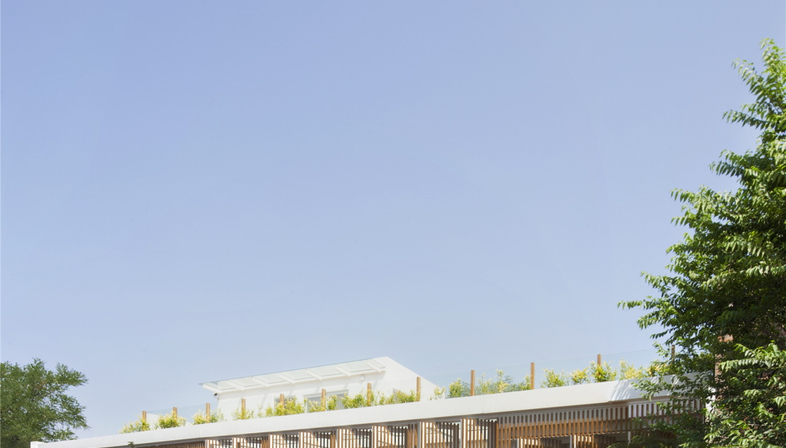 Chinese architect He Wei has restored an industrial building in Beijing and made it into a Zen & Tea Chamber, a place to get away from the noise of the city streets and cultivate introspection and the search for “light”.
Teahouses, public places where tea is the primary beverage served, are a very common and ancient tradition in oriental culture, dating back to the days of the British colonies in China and Japan. The tradition continues today, and has taken on different aspects and functions in different places and at different times, resulting in the evolution of many different types of teahouse.
In China the teahouse serves a function much like that of a western coffeeshop or pub, where people go to meet, talk and drink in company, the difference being that the primary beverage here is tea, in all its many varieties, the preparation of which can sometimes involve very special ceremonies.
Thus tea becomes a ritual that marks the rhythm of the day, a time to relax. But, unlike a western coffeeshop or pub, going into a teahouse means getting away from the city and public life to withdraw alone, or in the company of a small number of people.
He Wei’s Zen & Tea Chamber combines two moments of great introspection, interpreting them as different opportunities for self-discovery. The centre of his design is in fact a new circulation system in which he adds a flight of stairs, increasing the distance to the tearooms and meditation hall solely for the purpose of preparing people’s minds for the transition from an experience on an urban scale to one on a personal scale.
In a certain sense, the teahouse is a place and means of accessing the soul. The physical space consists of a building on two levels overlooking an inner courtyard, but in He Wei’s project it is also, and above all, a gateway to the inner world, reserved for dialogue among a few friends or simply with oneself.
The old factory had static walls with bare brick cladding, vertical windows and cement stringcourses. The same scheme was repeated on the back wall, over the courtyard, which was partly paved.
He Wei decided to make use of the idea of the glass entrance volume as a filter between the teahouse and the city, reconstructing it in a completely different way. After knocking down the walls, he preserved the area, expanding it to cover the entire horizontal dimension of the façade, even including a tree as tall as the building. The new wall between the existing façade and the street is a full-height sunbreak made out of strips of wood with a number of modular openings in its upper part and a round opening where the tree’s foliage is. This high-impact solution gives the whole wall on the street side a new look, creating a landmark combining the built and natural worlds.
As we go into this space, which is neither open nor closed, and is permeable because it is defined by the open pattern of wooden strips, we come into the building gradually, perceiving our detachment from a reality we can still see. The pattern of the sunbreak shadows completes the façade with a dynamic form of decoration offered to those passing by along the street.
The vertical windows not only remain but are multiplied, and their scheme is applied to all the walls, creating an order that wasn’t there before; the bare brick cladding is eliminated entirely, and all the walls are covered with plaster.
Opposite the arcade at the entrance, the rear courtyard, which has been paved again and is partly used as a garden, is connected via a new route to a flight of stairs He Wei has added on the western side, with a wooden sunbreak wall. The building now embraces the courtyard on three sides, underlining its role as the visual and conceptual fulcrum of the project as a whole. The addition of the flight of stairs adds dynamism to the view of the walls in the courtyard, too.
Via this long route from the road up to the second floor, from east to west and ending back in the east, a place which is not only physical but above all mental, guests are prepared for the experience of the tearoom and Zen meditation room, which they come to on the second floor. Visitors are gradually detached from the outside world, while still able to see out over the courtyards.
Light is a key theme in the project: both natural light filtered in through the sunbreak and artificial light from the decorations present, such as that lighting up the meeting room with self-illuminated walls.
Mara Corradi 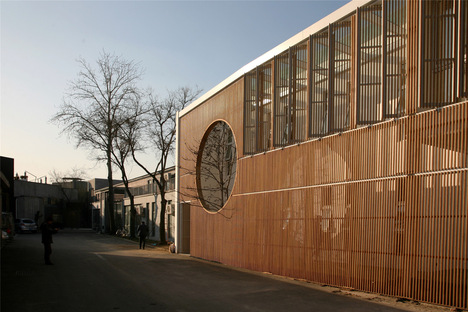 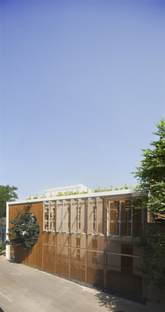 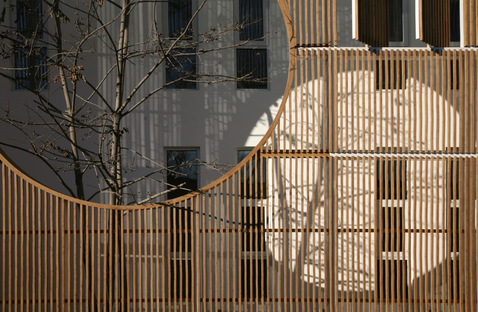 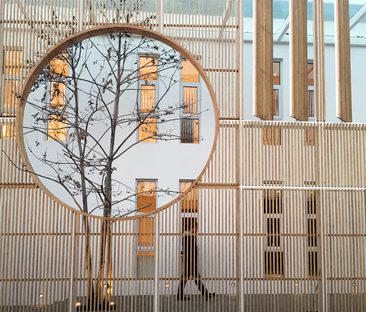 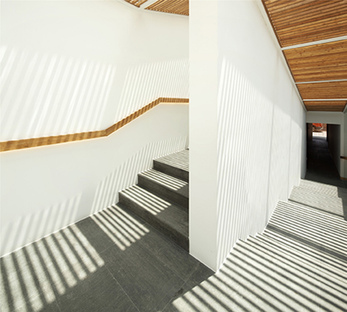 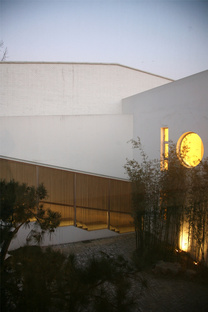 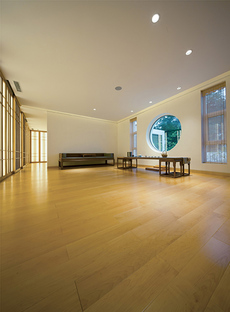 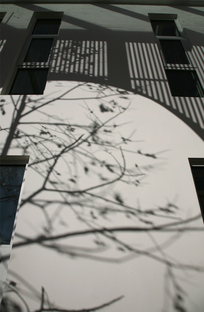 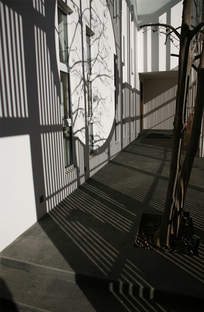 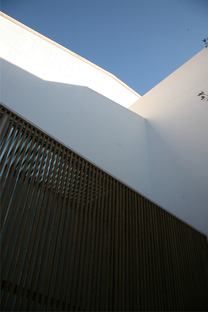 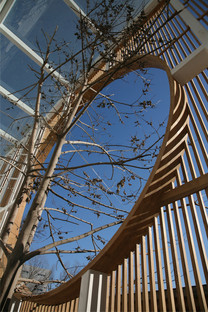 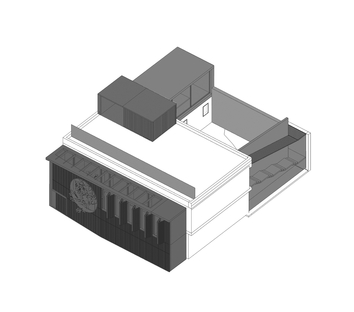 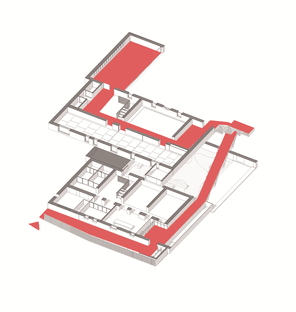 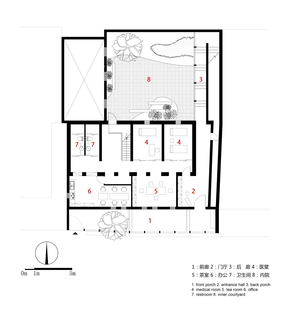 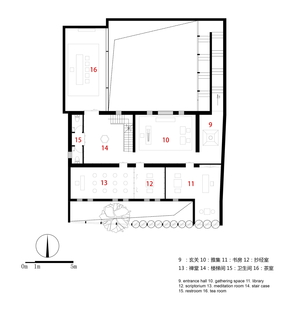 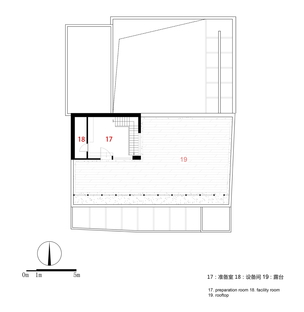 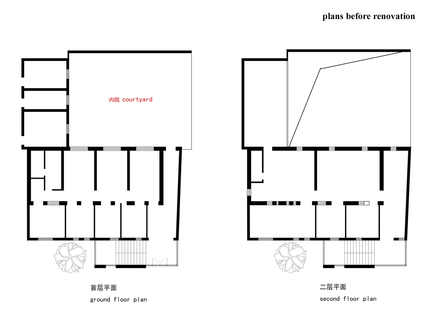 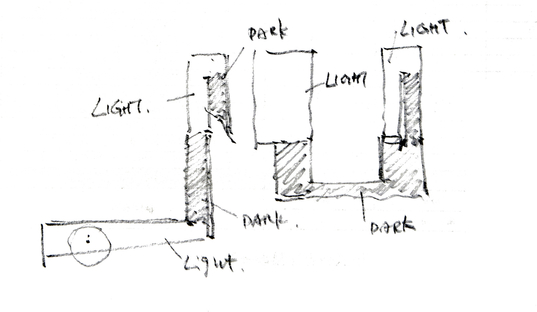 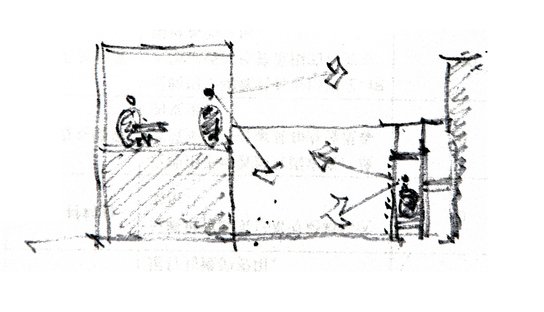 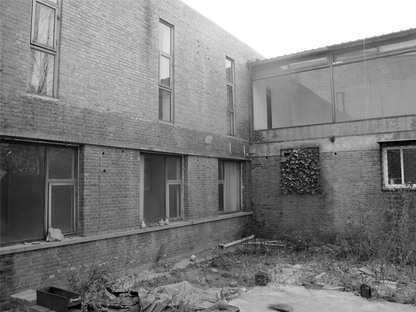 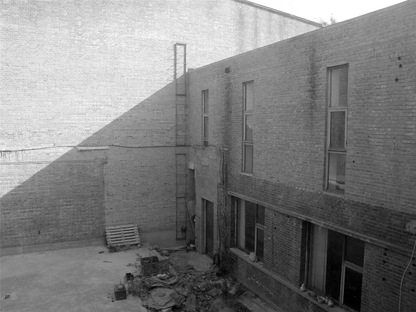